The backlash to alcohol industry’s move on labelling

Earlier this week, the alcohol industry-funded group DrinkWise Australia announced that some alcohol products would carry “consumer information messages” in what is a clearly pre-emptive move against the imposition of effective labelling requirements.

Sarah Jaggard, Community Mobilisation Policy Officer for the Australian Drug Foundation, writes below that these labels are unlikely to have the impact that is needed.

Health warnings will appear on alcohol packaging. The alcohol industry has introduced the labels voluntarily.

Is this the same alcohol industry that has been vehemently fighting larger, graphic labelling changes put forward by other countries? One thing is for sure, this is a move that indicates the industry fears stronger government regulation.

The industry’s move to put messages on the labels of all alcohol products is theoretically the right move and one that we’ve been advocating for.

However, it appears DrinkWise has missed the boat when it comes to effective health messages and could do with a little guidance from some of the nation’s eminent health bodies.

The Alcohol Policy Coalition recommends health messages that are outcome-related, that takes up 25 percent of the package surface and includes prominent text and graphic warnings.

Instead, what we have is embarrassingly tiny labels that don’t fully address the range of health information that consumers deserve access to.

Evidence has shown that industries (big tobacco and alcohol, for example) tend to pre-empt Government moves by tabling their own, softer versions of anticipated stronger strategies.

Given that the Government is sitting with the food labelling review, one has to wonder what the alcohol industry is expecting.

Meanwhile, here is some of the other reaction:

The health problems of alcohol are unlikely to be addressed through a few non-committal, bland and cloying platitudes slapped onto the side of a pack. The alcohol industry is supping with the devil by pretending that they can.

AMA President, Dr Steve Hambleton, said today that health warning labels on alcohol must be clearer and tougher about the health effects of excessive or irresponsible drinking and must be accompanied by a crackdown on the marketing and advertising of alcohol, especially to teenagers. “The labels introduced voluntarily by the industry do not go far enough,” Dr Hambleton said.“The AMA is keen to see the Government’s responses to the recommendations of the Blewett review of labelling law and policy, which will hopefully provide a stronger direction for the industry to follow…It is inconsistent and counterproductive for the industry to warn teenagers about the harms of alcohol use while still encouraging them to purchase alcohol through sophisticated lifestyle advertising and clever marketing.”

But the Cancer Council says the new warnings do not carry the same authority as warnings from an independent body. Chief executive Professor Ian Olver says information is missing – like the link between cancer and excessive drinking. “I think it is always preferable that an external agency determines what sort of information is in the best interests of the public so they can make an informed choice about the use of something like alcohol,” he said.

Meanwhile, this report examines some healthwashing initiatives by the alcohol industry in the US

Update. More reaction in this story from the West Australian 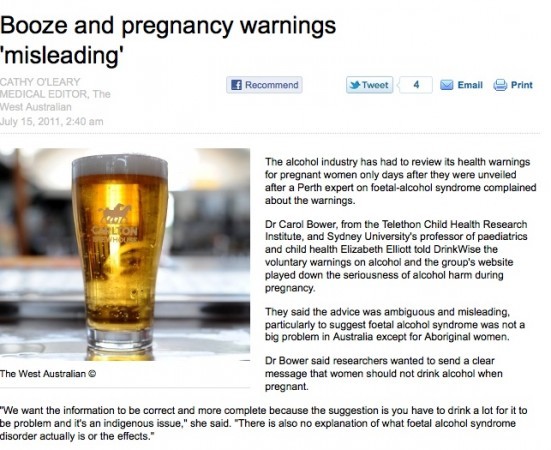