The ‘Catch it Early’ bandwagon: do the media overhype medical testing for healthy people?

A groundbreaking new study is examining how the media globally report on the benefits and harms of tests for healthy people.

Dr Mary O’Keeffe, from the School of Public Health at the University of Sydney, writes below that the findings are likely to shed new light on the causes of overdiagnosis in healthy people.

This article is published as part of the TOO MUCH of a Good Thing series, which is investigating how to reduce overdiagnosis and overtreatment in Australia and globally, and is published as a collaboration between Wiser Healthcare and Croakey.

Have you heard about the new Apple Watch device that promises to detect, and save you, from heart issues before you get them? How about the quick and simple blood test by the name of liquid biopsy to detect cancer 10 years in advance?

We hear a lot about the future role of artificial intelligence (AI) in our lives, but do you know there are now promises that AI will detect dementia — before symptoms appear — and hopefully inform prevention?

What is common across these tests is their focus, not on sick people, but on well people — people with no signs of a medical problem.

The promises of testing seem to be moving from targeting the sick to apparently healthy and well people to identify those at an increased risk of a disease or disorder.

In fact, research shows that many of us overestimate the benefits of testing. But are there pitfalls to consider?

Mass media and social media are key drivers of the hype around new tests and treatments.

The news is saturated with headlines displaying the latest advances in medicine and how they eventually will help our lives. Click-bait headlines containing words like ‘cure’, ‘revolutionary’, and ‘holy grail’ will always grab attention (here, here and here).

Previous research (here and here) tracking media coverage of medical treatments has identified evidence of exaggeration, inaccurate reporting of published scientific papers, overstating of benefits of treatments, downplaying of harms, and failure to report important conflicts of interest of the experts cited in the story.

So, the media often gives us an overly positive view of new treatments.

But how do the media reports on tests, in particular those for healthy people?

We actually do not know, and researchers in Wiser Healthcare are currently doing a research study mapping how the global media report on the benefits and harms of five tests for healthy people.

Potential harms of testing the healthy

Researchers in Wiser Healthcare have concerns about the promotion of new tests.

While early detection makes intuitive sense, the quest for ever-earlier detection of disease and the medicalisation of prevention can lead to unnecessary classification of the healthy as sick: overdiagnosis.

Overdiagnosis occurs when people receive a diagnosis that they do not need, that does more harm than good.

Giving somebody an unnecessary diagnosis can lead to overtreatment, psychological distress, and health anxiety. What is worse is that only a small proportion of people are knowledgeable about overdiagnosis.

Let’s take a look at some of these tests and what they promise.

3D Mammography for the early detection of breast cancer

Screening with mammography (both 2D and 3D) uses X‐ray imaging to find breast cancer before a lump can be noticed. The goal is to treat cancer earlier, when a cure is more likely.

Any headlines portraying a new test that can achieve this goal will be attractive to readers.

However, there is large uncertainty surrounding the benefits of 3D mammograms. For example, we already know that overdiagnosis is a significant harm of 2D screening mammography.

Overdiagnosis of breast cancer can lead to unnecessary surgery, radiotherapy and endocrine therapies, as these are standard treatments for women with screen-detected cancers (here, here and here).

We simply do not know enough about the benefits and harms of the newer 3D mammography.

But do the media portray this uncertainty in their reporting about the new test?

Liquid biopsy for the early detection of cancer

A quick and cheap way of detecting cancer will always sound attractive.

Many companies are now promoting a blood test, called liquid biopsy, to detect cancers (often several cancers at the same time) many years in advance (here, here and here). This carries a similar rationale to other new tests: catch the disease early — and either prevent or cure it.

However, as well as a lack of research demonstrating the actual validity of these blood tests (do they perform what they claim to do), there are concerns that the detection of certain cells in healthy populations could lead to overdiagnosis.

Dementia is a devastating condition and millions of families worldwide are coping with a person who has the diagnosis. Current treatments do not prevent or cure the condition and at best slow down the progression of symptoms for short periods.

A simple blood test or device that will eventually prevent or cure dementia is appealing in that it works even earlier in the process, maybe even before symptoms appear.

The blood tests claim to detect biomarkers in a person’s blood that are apparently indicative of the future development of dementia (here, here and here).

AI technology is stated to have similar advantages, detecting brain or functional abnormalities in individuals, long before a diagnosis becomes visible.

However, it is unclear that either of these tests are valid (can they perform the role they claim to do), and that these tests will actually improve clinical outcomes.

Concerns have been expressed (here, here, here and here) that these new tests are an open invitation to overdiagnosis and that this overdiagnosis will have serious psychological, social and legal harms.

Atrial fibrillation (AFib) is an irregular beating of the heart’s two upper chambers, and is considered a cause of stroke.

Timely diagnosis of clinically important AFib may enable the initiation of effective therapies in some people, and help reduce strokes and death.

The new Apple watch ECG is designed to detect changes in heart rhythms that may be a sign of a person going on to develop AFib (here and here).

Similar to claims about the other new tests, the idea of early detection seems appealing.

However, AFib is not hugely common, and a 24/7 screening device could lead to harms in the form of false positives/alarms, overdiagnosis and overtreatment.

The lack of knowledge around the natural course of AFib, along with research examining the validity of the Apple Watch for this purpose, leaves us unclear on the potential benefits and harms for the worldwide population.

I wonder do the media display this uncertainty about the Apple Watch?

So, researchers at Wiser Healthcare are concerned about the validity of these tests, the lack of evidence of benefit for testing the healthy, and how the media report on these tests.

This is where the concept of overdiagnosis becomes important to understand.

Stay tuned for the results of this large study examining worldwide media coverage of the benefits and harms of testing the healthy.

This will be the first study in the world to analyse the media coverage of the benefits and harms of tests that have the potential for overdiagnosis in healthy people.

• Dr Mary O’Keeffe is a Marie Skłodowska-Curie Postdoctoral Fellow at the Institute for Musculoskeletal Health, a division of the School of Public Health, University of Sydney. Mary’s fellowship involves two years at the University of Sydney, a three-month secondment to the European Pain Federation in Belgium, and nine months at the University of Limerick in Ireland. Mary completed her PhD in the University of Limerick, Ireland in 2017. It involved a clinical trial examining the effectiveness of a personalised exercise and education approach for people with chronic low back pain compared to a group exercise and education approach.

O’Keeffe’s current research focuses on nudge-interventions to improve healthcare delivery, media coverage of new tests for healthy people, media coverage of The Lancet low back pain series, and the impact of diagnostic labels for low back pain on treatment choices. She is passionate about public engagement and communicating evidence-based information about low back pain through radio, newspapers and social media. She is a member of Europe’s Voice of Young Science Network and an invited member of a low back pain guideline development committee within the European Pain Federation (EFIC). 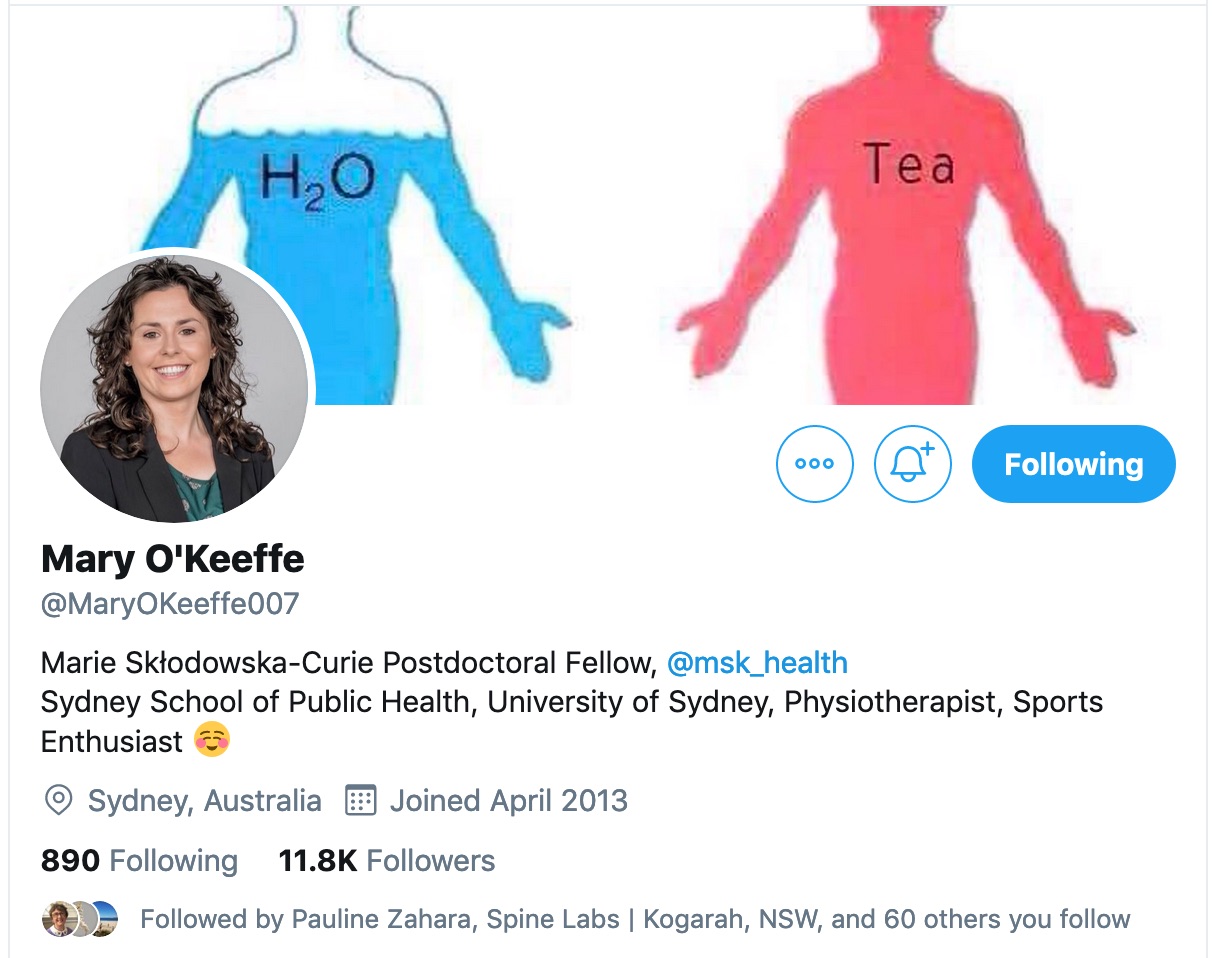 PrevPreviousAcademics in the bush to address health inequities: Does inequity in our own backyard need to be addressed first?
NextHigh praise for new documentary as #SaveMedevac campaign gathers forceNext