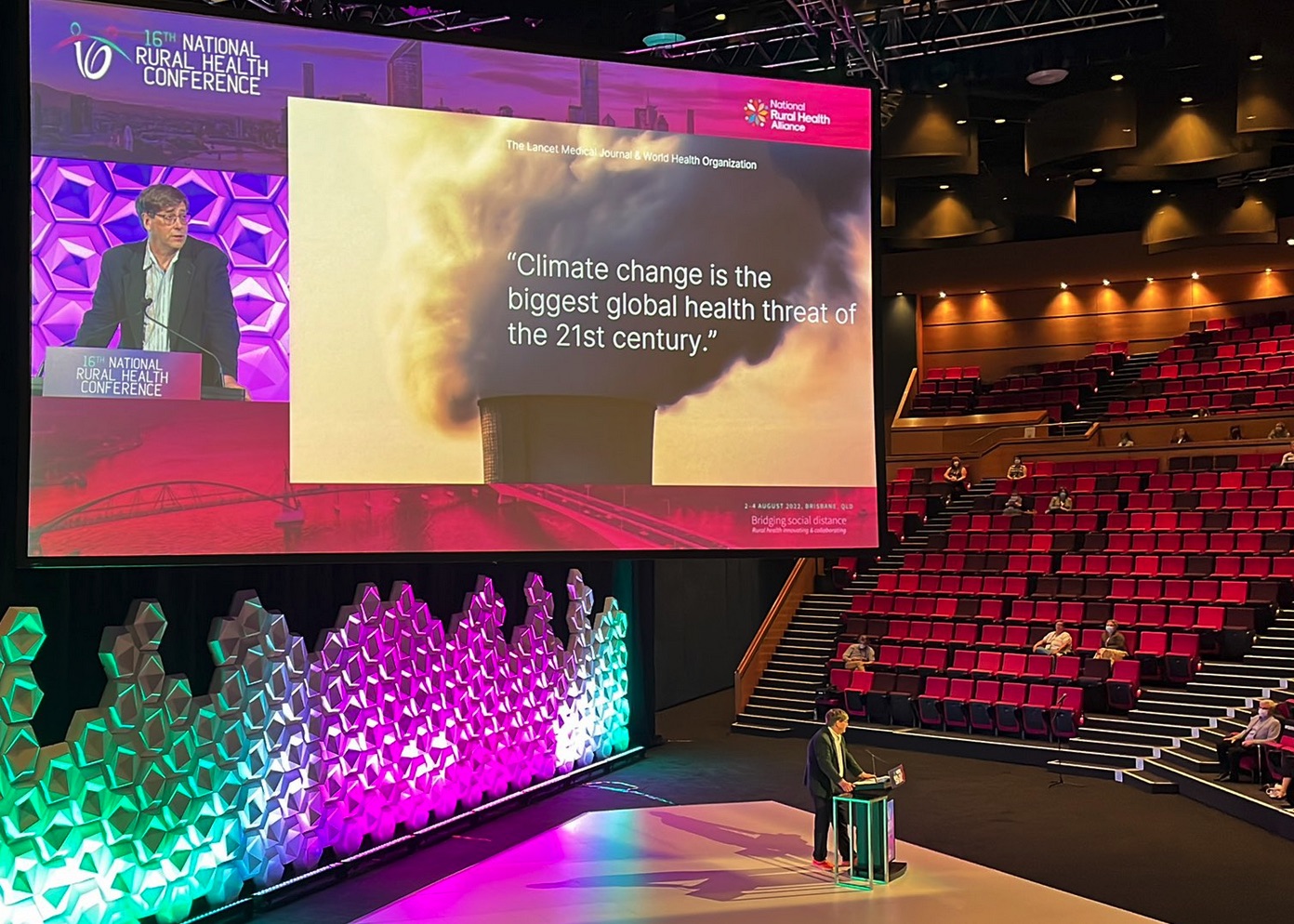 From Parliament House in Canberra to the 16th National Rural Health Conference in Queensland, the climate crisis and its devastating health impacts have been in the spotlight, reports Croakey editor Dr Amy Coopes. Finally, some progress is being made.

The climate wars were declared “in retreat” yesterday after the Greens indicated they would pass Labor’s climate bill, locking in a 43 percent emissions reduction target, and Liberal MP Bridget Archer indicated she would cross the floor to support the legislation.

Scamps, previously a GP from Sydney’s Northern Beaches, called on Butler to outline the substance and timeline for delivery of the strategy, telling the chamber her specialist college and the Australian Medical Association had both declared climate change a health emergency requiring urgent action.

Acknowledging Scamps for her “important question”, Butler echoed the World Health Organization’s characterisation of climate change as the “greatest threat to public health in the 21st Century”.

“They estimate that between 2030 and 2050, 250,000 people every year will lose their lives as a direct result of a warming planet. And the impact in Australia will be profound. In a continent that already pushes us right up against the limits of human tolerance, heat-related deaths will increase,” Butler told the House.

He said Australia would see the health impacts of climate extremes intensify, with substantial growth in devastating weather events and the slow creep of tropical disease further southward.

Butler said dengue fever would be seen as far south as Rockhampton by mid-century and move into northern NSW by 2100, and he noted that apart from the direct toll of megafires like Black Saturday, such events were also already accompanied by an order of magnitude more heat stress deaths.

“Australia lags the rest of the world in climate and health after nine long years of denial and inaction,” said Butler, describing “good climate policy as good public health policy”.

Butler said he had advanced talks with his state and territory counterparts on reducing emissions from the health sector, which was itself a major contributor to the problem, accounting for about seven percent of the nation’s greenhouse gas output. The Health Minister said greater action also needed to be taken to shore up healthcare’s readiness for and resilience to climate shocks.

On the climate and health strategy alluded to by Dr Scamps, Butler said he had commissioned advice from his Department about its implementation and “we are getting on with the job of making that plan”.

He described the introduction of Labor’s climate legislation this week – “real action on climate” – as the “first and most important step”.

The bill received a significant boost on Wednesday when Greens leader Adam Bandt told the National Press Club his party stood ready to support its passage through both houses of parliament, and Liberal MP Bridget MP told her colleagues she would be crossing the floor in endorsement.

Archer, who is member for the Tasmanian seat of Bass, encompassing the island state’s rural north-east, said she had reached the conclusion that “it is important we act now and not delay until the next election”, describing the climate crisis as an issue that “transcends age, gender,  political beliefs and socioeconomic circumstances”.

“The climate wars may or may not be over, but they are certainly in retreat,” Bowen said. 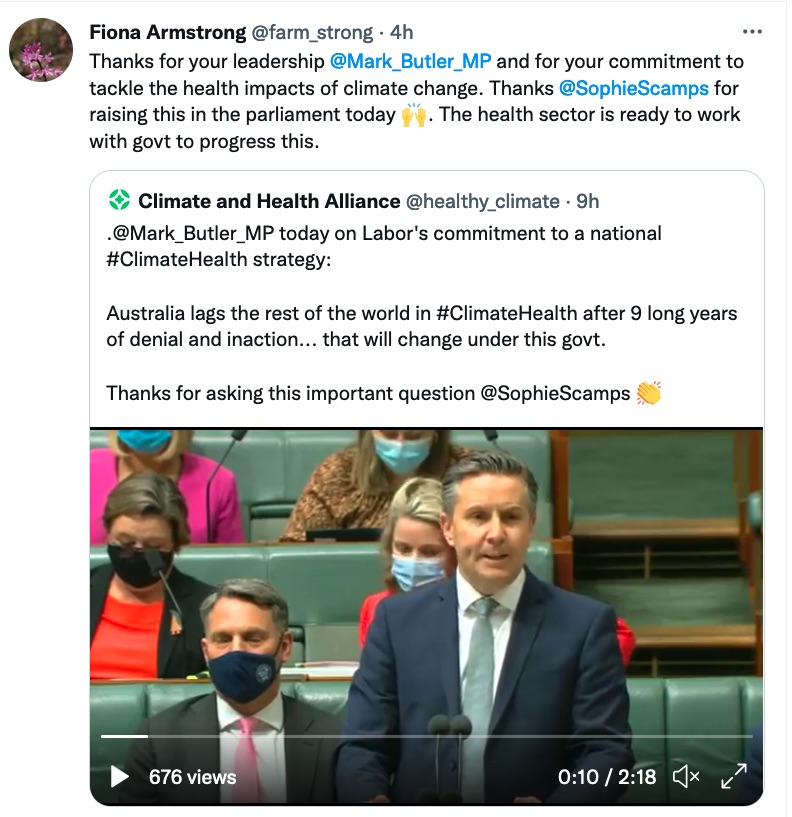 While events played out Canberra, climate and health was also in sharp focus at the 16th National Rural Health Conference in Brisbane, where the implications of the climate crisis for rural communities took centre stage.

Rural communities were uniquely vulnerable to the impacts of the climate crisis and, as a “wealth of lived experience in this room” could attest, they already found themselves on the frontlines, piling pressure upon services under strain, conference delegates heard.

Some 700 delegates have gathered in Brisbane for the renowned rural health event, which is being held for the first time since the global outbreak of COVID-19, and has an emphasis on rural readiness for the climate emergency.

Professor Mark Howden, who is director of the Institute for Climate, Energy and Disaster Solutions at the Australian National University, described the accelerating and converging impacts of global warming and the need for systemic understandings and responses to the crisis.

“Climate change is a real and present danger when it comes to rural health concerns,” Howden said in an interview with Croakey on the sidelines of the conference. “It’s bad and it’s getting worse, and we need to take more action than we thought was perhaps needed at this point in the climate change trajectory.” 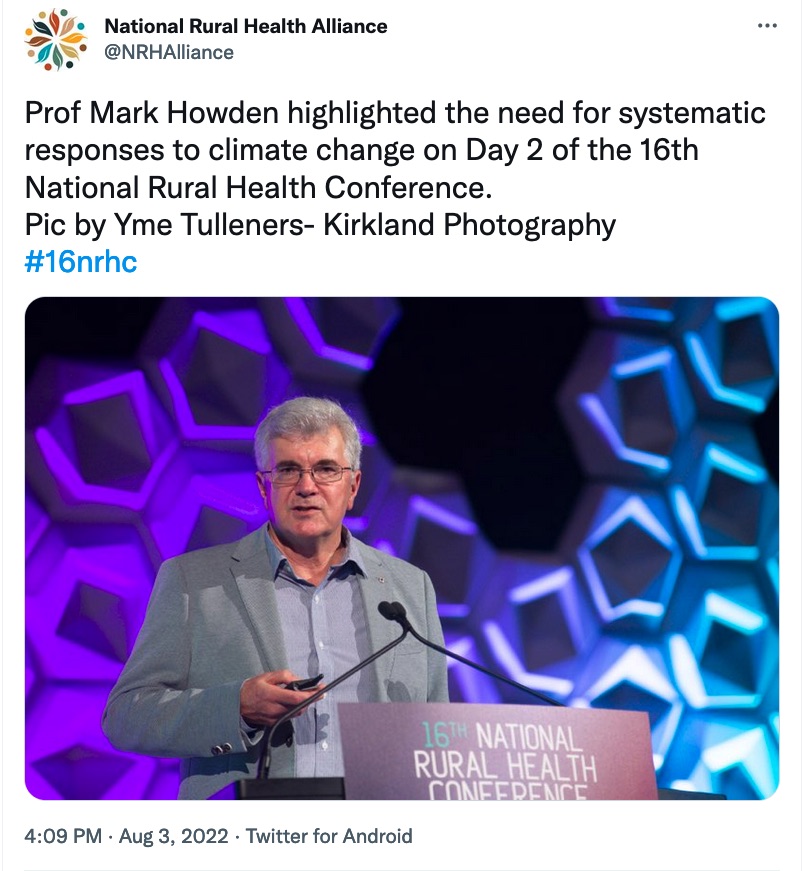 Rather than understanding extreme events purely in health terms, Howden said it was essential to appreciate the flow-on effects for agriculture, water, energy, food preparation, labour productivity – all of which either directly or indirectly also influenced health.

“There’s systemic impacts of climate on rural health and so we need to be thinking in systemic responses,” he said, also highlighting the aggregation of risks, as seen in Australia over summer with the overlap of flooding disasters and COVID-19.

While Australia was largely a “representative microcosm of global change” tracking in line with averages in terms of accelerating impacts like storm intensity, extreme flooding and cyclone strength, Howden said we were leading the world in terms of fire risk. Along with drought and heat stress, rural communities were particularly vulnerable to fires.

Focusing on the issue of heat, Howden said there was a direct observable impact on mortality due to the physiological stress, particularly for people with chronic conditions, though he said we failed to capture this in our data collection and reporting.

“If someone dies from a heart attack associated with higher heat levels it’s actually just recorded as a heart attack, there is no mention of the fact that it might actually have been triggered by high temperatures,” Howden said. “I think we need to be thinking about how we more effectively record this information so that we can actually have a handle on how this is impacting, and how treatment effectiveness is propagating.”

But there were also downstream impacts, some of which were hidden, with a domino effect on water and crops flowing through to livelihoods and labour productivity, mental health and the ability to take preventative action. Heat events were also associated with spikes in suicide, domestic violence and violence more generally, as well as criminal activity, and with accumulation of future chronic disease burden via decreased physical activity. 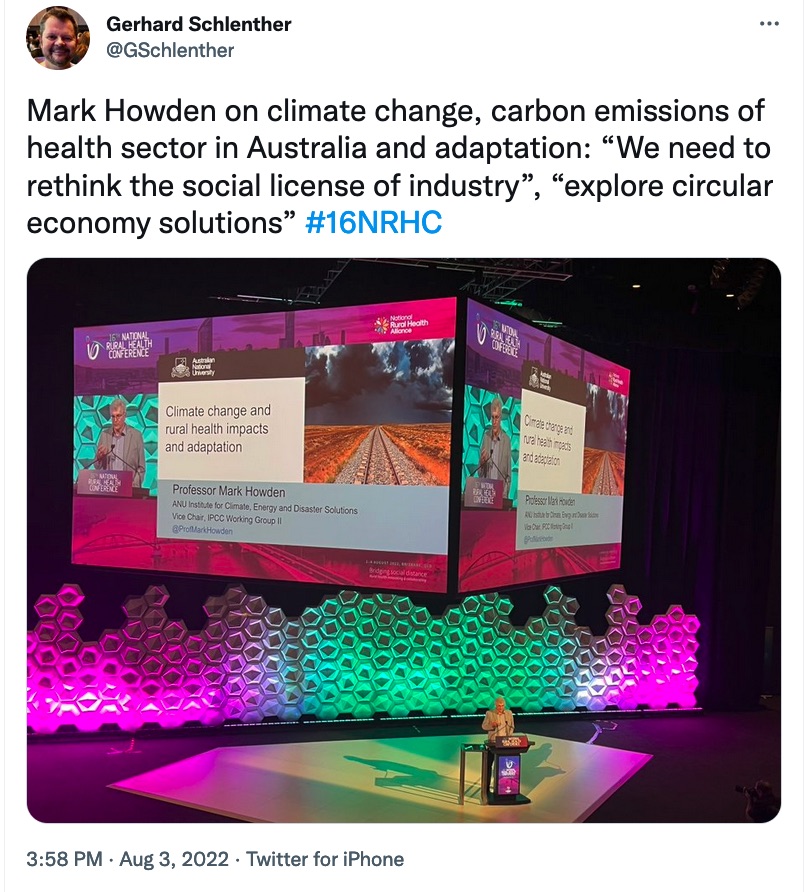 Roland Sapsford, the new chair of the Climate and Health Alliance, paid tribute to the “wealth of lived experience in this room around the immediate impacts of climate change in rural health care in Australia” following years of historic bushfires and flooding in his Conference keynote.

Sapsford said climate instability “adds yet another pressure to how care is delivered, and to the chronic staffing and recruitment challenges and lack of investment” in rural health.

“People in rural Australia know all too well the impact of droughts, extreme heat, floods, fires. You also know first-hand the way the burden of these often falls most heavily on those already burdened by low incomes, racism and economic insecurity,” he said.

“Rural Australia is often the first hit by the impacts of a climate disaster. This means rural Australia has a vested interest in being part of the solutions.”

Even as delegates were meeting in Brisbane, Sapsford said rural communities continued picking up the pieces following the summer’s catastrophic floods, with real questions about their wellbeing and prospects for the future – perhaps Australia’s “first domestic climate refugees unable to go back to their homes.”

“What will happen to them if, as the Bureau of Meteorology is forecasting, there is a 50:50 chance of another La Nina cycle this spring or summer bringing more heavy downpours fueled by climate change?” he asked.

He said much rural health infrastructure was old, outdated and not fit for purpose in an era of extreme heat, severe storms, floods and fires, medical supply chains were vulnerable to disruption as were power and water supplies, and staff access to their workplaces.

Sapsford described the election of the Albanese Government as a “sea change” for climate change engagement, representing a “real opportunity to shift the political discourse to a genuine discussion about how we tackle climate change,” including listening to Traditional Owners on environmental stewardship.

Sapsford called on delegates to hold onto a sense of “both urgency and hope”, saying rural health care workers had an opportunity,  ability and responsibility to “join up a narrative about the personal and the immediate with the planetary and enduring”.

The National Rural Health Conference concludes on Thursday in Brisbane. 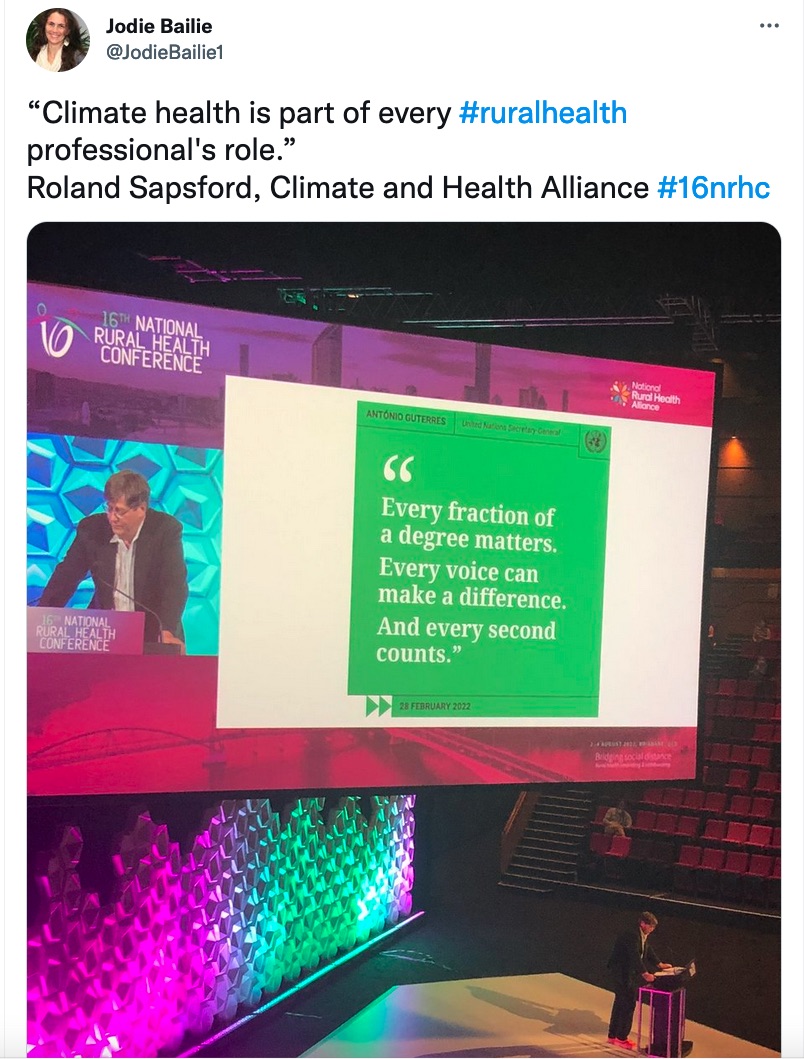 Dr Amy Coopes is covering the National Rural Health Conference for the Croakey Conference News Service on 3 August. You can follow her on Twitter @coopesdetat, along with @CroakeyNews and @WePublicHealth, which will be curated this week by the NRHA from Brisbane. You can join the conversation on the hashtags #16nrhc #ruralhealthconf. Bookmark this link for our stories and follow the #16nrhc Twitter list.