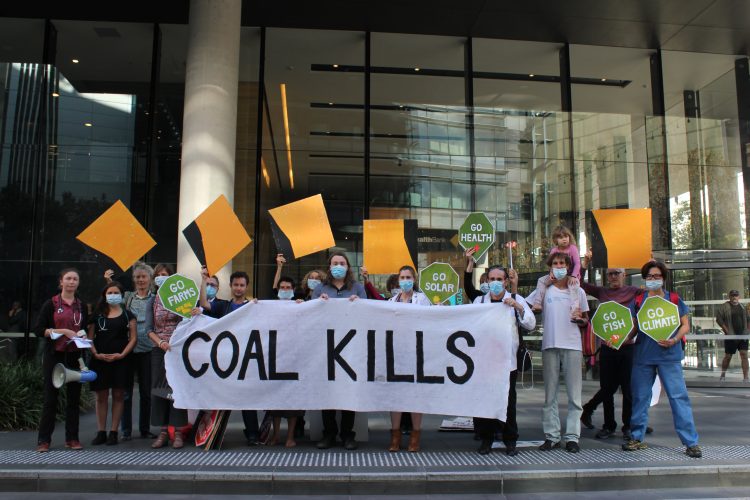 Doctors for the Environment Australia protest outside a Commonwealth Bank branch in Sydney, May 2017. Photo: Chris Ganora

The climate crisis – what is to be done?

The lack of effective leadership during the current bushfire crisis has left many Australians disillusioned by the ability of governments to address the catastrophic effects of climate change.

But what is the answer when democratically elected leaders appear unwilling or unable to deal with such a serious threat to the well-being of their constituents?

Below Paul Laris invites us to consider the potential of collective action (such as this example from Extinction Rebellion) to drive the types of radical changes needed to mitigate the future impacts of climate change.

The predictions of climate change scientists have consistently understated the seriousness of the threat and overstated the time before we feel the  undeniable impact.

They have been understandably conservative given the eagerness of denialists to seize on anything that might seem alarmist. But the trend is clear: life-threatening climate change is coming faster, sooner and more severely with every new release of data.

It seems inevitable that the major positive feedback loops of melting tundra, reduced albedo, CO2 from fires etc are kicking in and the rate of change is about to shift gear from incremental to exponential.

The canary in the coal mine

As one Dutch cartoonist Tjeerd Royaards has eloquently pointed out, Australia in flames is the sick canary in the global coal mine. In the face of all this we have a government that has overseen increasing emissions, sabotages negotiations for international co2 reduction and is intent on increasing coal mining and exports. Labor, while offering some de-carbonising initiatives seems intent on fighting for the Queensland seats it lost in 2019 and so has no plans to phase out coal.

We are on track for a 3-4c global temperature rise, the consequences of which are incompatible with the continuation of human civilisation.  Our health depends on climate safety. The obvious health impacts of the fires include burns, traumatic injuries, mental illness and short and long term respiratory damage from continuing smoke inhalation.

But the wider health impacts of an increasingly dangerous climate will be far more damaging. Without climate safety there can be no safe housing, no food security, no infrastructure for transport or health care. The commercial impacts of the current fires will likely provide a foretaste of the social health consequences of a wider economic and financial collapse.

The failure of governments and markets

The system of goverment has failed us. The markets have failed us. Together they have blocked adopting the technologies and socio-economic reforms that could save us. These are the facts confonting the Australian who looks beyond the pages of Murdoch media.

The only question now must be: What is to be done? The electoral system, even if it could transcend the limitations of donor influence, mass advertising a la Clive Palmer and the pernicious anti-science of the Murdoch clan cannot, at the moment, do anything before mid 2022.

So if not the traditional political process, what then? As individuals we might choose to accept defeat and look to our own survival interests. That in turn might split along demographic and class lines. Older Australians can contemplate being the last generation to have the opportunity of reaching old age. For boomers self-interest might suggest the risky strategy of finding a comfortable bolt hole from which to watch the end game. For those with young children perhaps there is more motivation to struggle to build a sustainable and socially viable future.

The potential of collective action

And what of collective action? There is the potential to mobilise millions of us. This is a government that has lost the confidence of the people. When parliament next sits on February 12…could we get a million people to Canberra demanding the government call an early election? Simultaneous marches could be held in all major cities and towns.

Should we crank up XRs strategy of civil disobedience  – but on a massive scale? We already have a twitter storm of discontent – even disgust, with the current government’s performance. The opportunity to mobilise is here now. To do nothing is to acquiesce to not only climate catastrophe, but also to dishonesty and  an arrogance in government that is sliding into an authoritarianism it will justify as an emergency response.