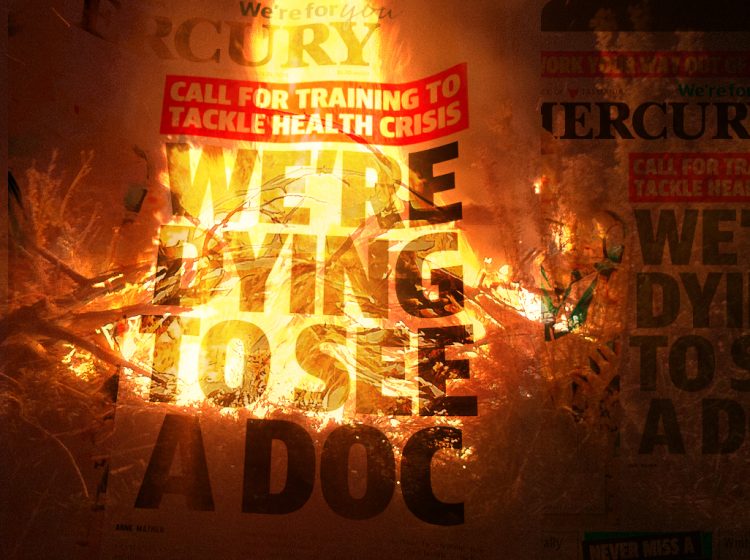 Democracy is on fire, as public interest journalism struggles and misinformation spreads. Image by Mitchell Ward

The crisis in regional journalism, why it’s a big health concern, and some suggested solutions

As a motley crew of anti-vaxxers, United Australia Party supporters and “freedom” protesters gathered in Canberra this week, legendary singers Joni Mitchell and Neil Young drew global headlines for their stance against the Spotify platform’s spread of misinformation.

“Misinformation in the form of fake news, intentional disinformation and misinformed opinion has become a crucial issue for democratic systems around the world,” wrote Griffith University academic Dr David Tuffley in an analysis of Spotify’s responsibilities at The Conversation. “How to combat this influence without compromising democratic values and free speech?”

In this context, a Parliamentary inquiry into regional newspapers provides a timely opportunity to consider an important concern for many rural and regional communities with wide-ranging health implications, not least in a time of global health crisis that is being prolonged by misinformation and disinformation.

It is unfortunate, as one publisher wrote to the inquiry, that the process has afforded so little opportunity for wider engagement – being announced on 22 December with a 28 January deadline for submissions. At this stage, no submissions have been published from any health or rural health stakeholders, which is a real shame, especially in the COVID context.

(However, Croakey readers can still contribute by completing the inquiry’s online survey that is asking Australians living in regional, rural or remote areas about how they access local news. The survey is open until 11 February.)

COVID has, of course, increased the importance of communities having access to local, reliable information and being able to hold decision-makers to account – while also undermining the capacity of newsrooms to contribute to meeting these needs.

The Journalism Education and Research Association of Australia (JERAA) submission reminds us how major publishers such as News Corp Australia and Australian Community Media (ACM) stopped printing more than 100 local and regional newspapers during the pandemic – shifting them to digital-only platforms, consolidating mastheads or closing them altogether.

As a result of such contractions, the submission says communities can miss out on key information and opportunities for local debate and deliberation, with “considerable impacts” on citizens’ engagement with democracy.

“Social media may be left as the only available source of local information, but on social media misinformation and disinformation are widespread, and conventions that inform journalism – such as balance and fairness – may be absent,” JERAA says.

A submission from the News and Media Research Centre at the University of Canberra cited a survey of regional audiences conducted at the end of 2019. It found that one in five regional Australians had experienced a closure or merger of a news service in their area in the past five years – and this was before contractions associated with the pandemic.

People who experienced local news closures reported a decrease in information about their community and a reduced sense of belonging. “What this data suggests is communities lose more than information when a local newspaper closes, it loses local champions in its reporters who are most likely to advocate on their behalf, and who feel strongly about holding the local council to account,” the submission says.

The Media Entertainment and Arts Alliance (MEAA) submission argues that local public interest journalism should be seen as an indispensable part of a community’s civic infrastructure, but that many regional and rural communities are missing out.

“The tide must be turned so that communities are adequately informed and can contribute to local debates and decisions,” says the MEAA. It notes that regional newspapers, especially in print form, have been in steady decline according to every benchmark – revenue, circulation, subscriptions, job numbers and local content – for well over a decade.

The MEAA submission cites Public Interest Journalism Initiative data showing that of 182 newsroom contractions (masthead or newsroom closures, suspension of services) over the past two years, 68 percent were in regional Australia.

“It has been a sorry story for the seven million people living in regional Australia,” says the MEAA submission.

Many submissions argue for an urgent need for government support to help sustain regional publishers, through paying for advertising and public notices, and other policy initiatives.

A submission from Deakin University researchers cites preliminary research findings that governments’ advertising spend has fallen dramatically in the past five years across country newspapers.

The submission says that while many global companies have withdrawn advertising from Facebook in the interests of democracy and in protest against hate speech online, tiers of government in Australia continue to spend big on Facebook advertising, “while directly attributing the collapse of public interest journalism to unfair advantage in the marketplace of social media conglomerates”.

The researchers highlight the Victorian Government’s April 2020 pledge to support advertising in regional outlets and reported that many proprietors had found this useful.

The MEAA says the time has well and truly arrived for the Federal Government to sustain local public interest journalism by embracing the need for multi-year, arms’ length funding that is tied to the production of local content. “Anything less will foster a continuation of the progressive decline of regional journalism,” they say.

A number of submissions also call for the Public Interest News Gathering (PING) program to be re-started and strengthened. However, the Victorian Country Press Association argues that any future such fund should be targeted only at smaller local community news media businesses who publish non-syndicated news. They said it was unfortunate that much of the previous PING funding went to large media businesses, including ACM “who subsequently abandoned some of the communities they previously served”.

Many submissions also raise concerns about the News Media Bargaining Code, which sought to encourage negotiation between publishers and the digital platforms Facebook and Google and has been promoted by the Government as an example of media policy success.

Many note the lack of transparency around the initiative’s outcomes, including whether the deals will be used to fund journalism. (Croakey notes that similar concerns have also been raised in recent reports, including by the Reuters Institute and the Columbia Journalism Review).

The MEAA has urged the inquiry to ask media companies that have struck arrangements with the major digital platforms how much funding they have received from these platforms and how much has been used for journalistic resources.

JERAA also advocates for investigation of whether deals under the Code have had any impact on either the scale of reporting of critical local news e.g. councils and state govt, rural land and water planning, health and industry development, or the scope of regional media diversity (e.g. publishers, news sources, diversity of reporters).

The University of Canberra submission also highlights the lack of transparency around the outcomes, and says that the deals that have been reported “cover only a fraction of the hundreds of regional and rural newspapers across Australia”.

..the negotiation process behind these deals has raised important questions about transparency, equivalence of the deals across organisations, the exclusion of some organisations, including smaller, regional and non-traditional news outlets, and how the money would be spent by news outlets without a requirement for it to go to public interest journalism.

It also raises questions about whether deals have been done with a good range of businesses to enhance the health of the Australian news environment and engage public interest journalism.”

“Signatories of the voluntary content agreements must disclose the size, uses and outcomes of the funding on a regular basis, in order to monitor the impacts of the agreements,” the researchers say.

While some publishers were grateful to have negotiated deals with Facebook and Google, even some of these raised concerns about the processes.

“The monies being provided by the digital platforms have been commercial agreements and require added resources and costs,” says the submission from Star News. “The deals are not simply payments for existing content using existing infrastructure. We have added numerous journalism resources, infrastructure and software development to be compliant with the requirements of the agreements.”

The submission by the Department of Infrastructure, Transport, Regional Development and Communications provides some useful long-term context about the Australian media industry, showing that per capita newspaper circulation has been declining since the 1950s. 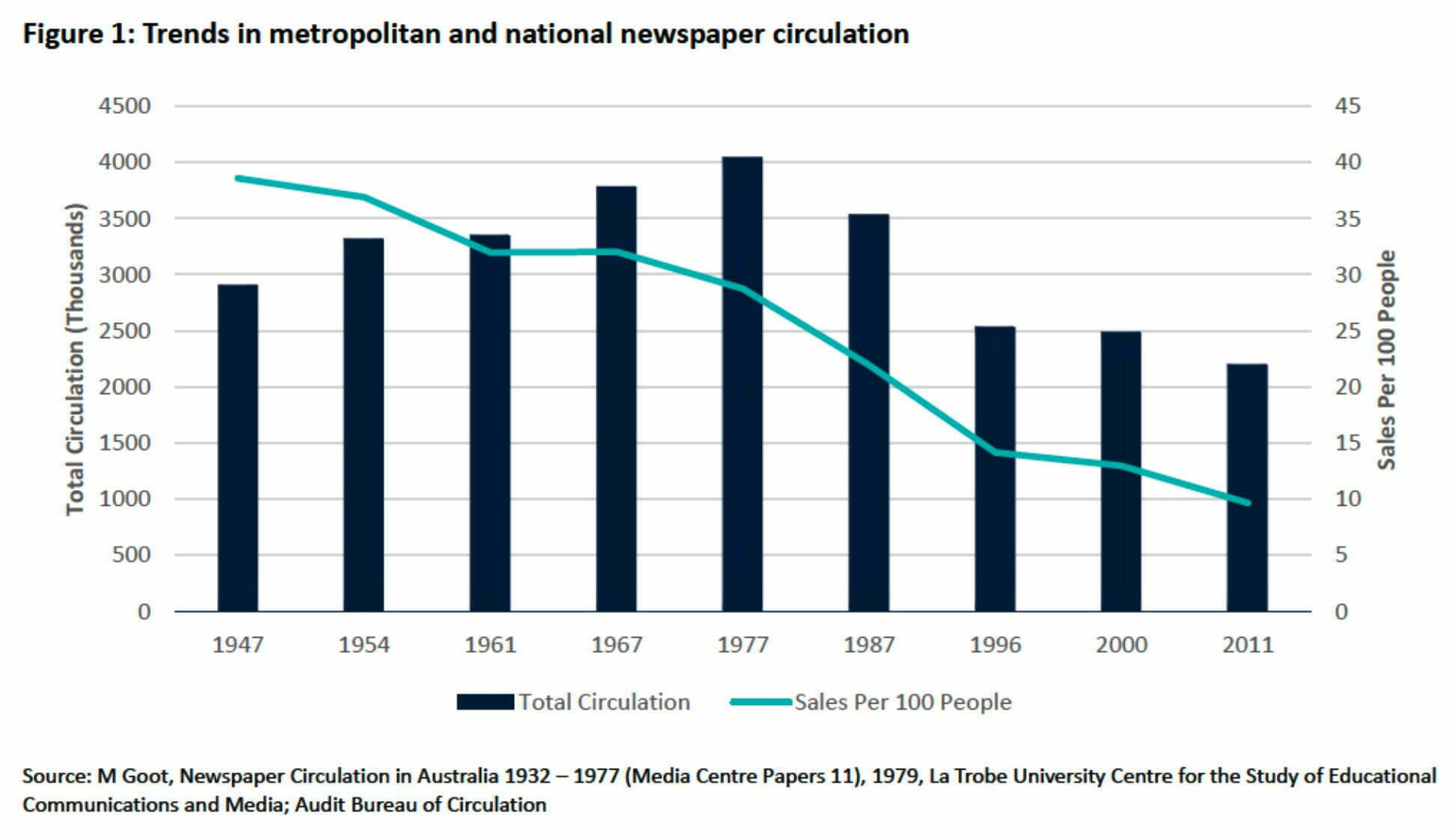 It says revenues for newspapers in regional and metropolitan areas have fallen for more than a decade. While many submissions to the inquiry describe a range of startup enterprises, the Department notes that their future is uncertain and requires ongoing monitoring. 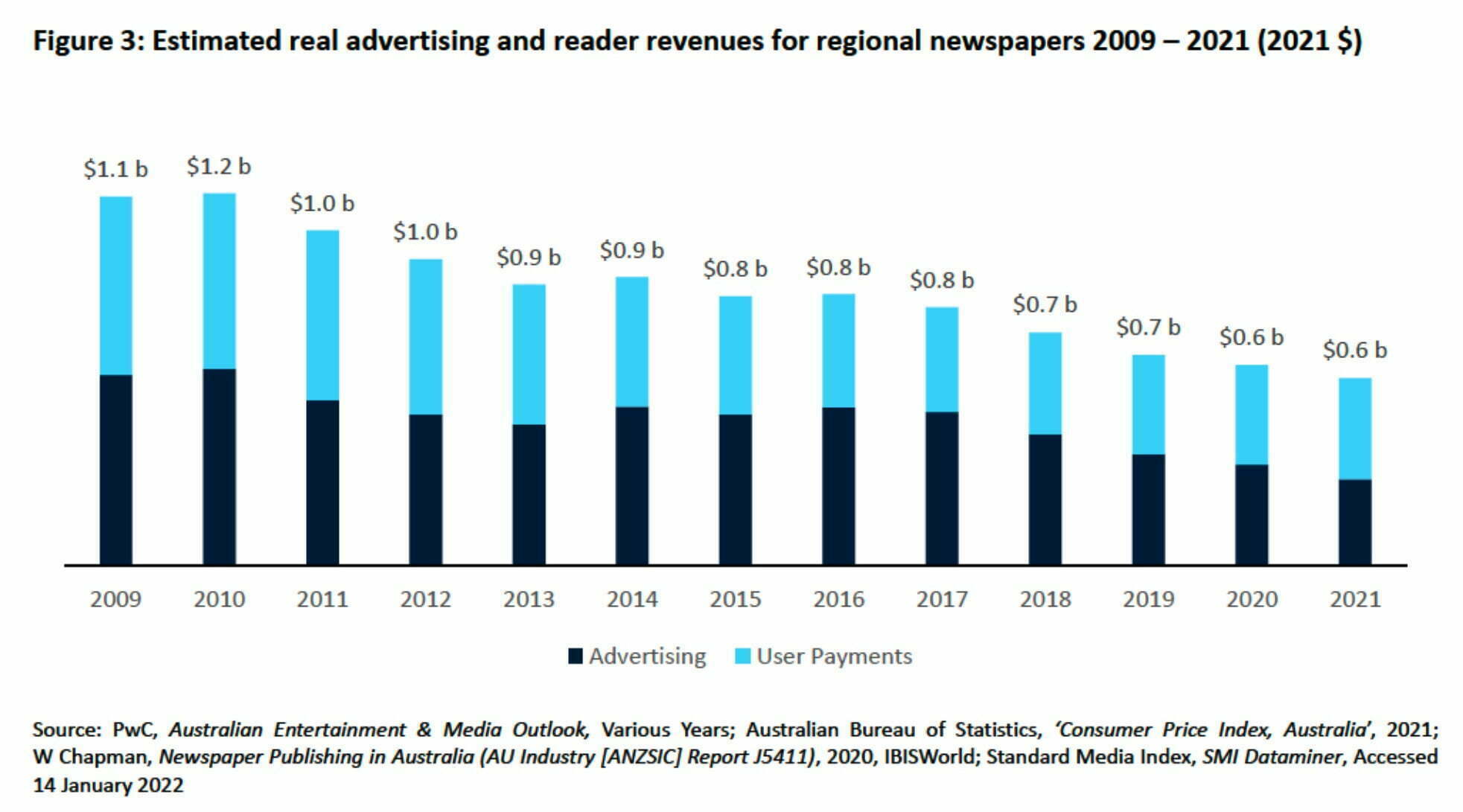 Despite the value that consumers place on news, very few Australians are willing to pay for it, the Department submission says. About 12 percent of Australians living in regional areas subscribe to a newspaper. 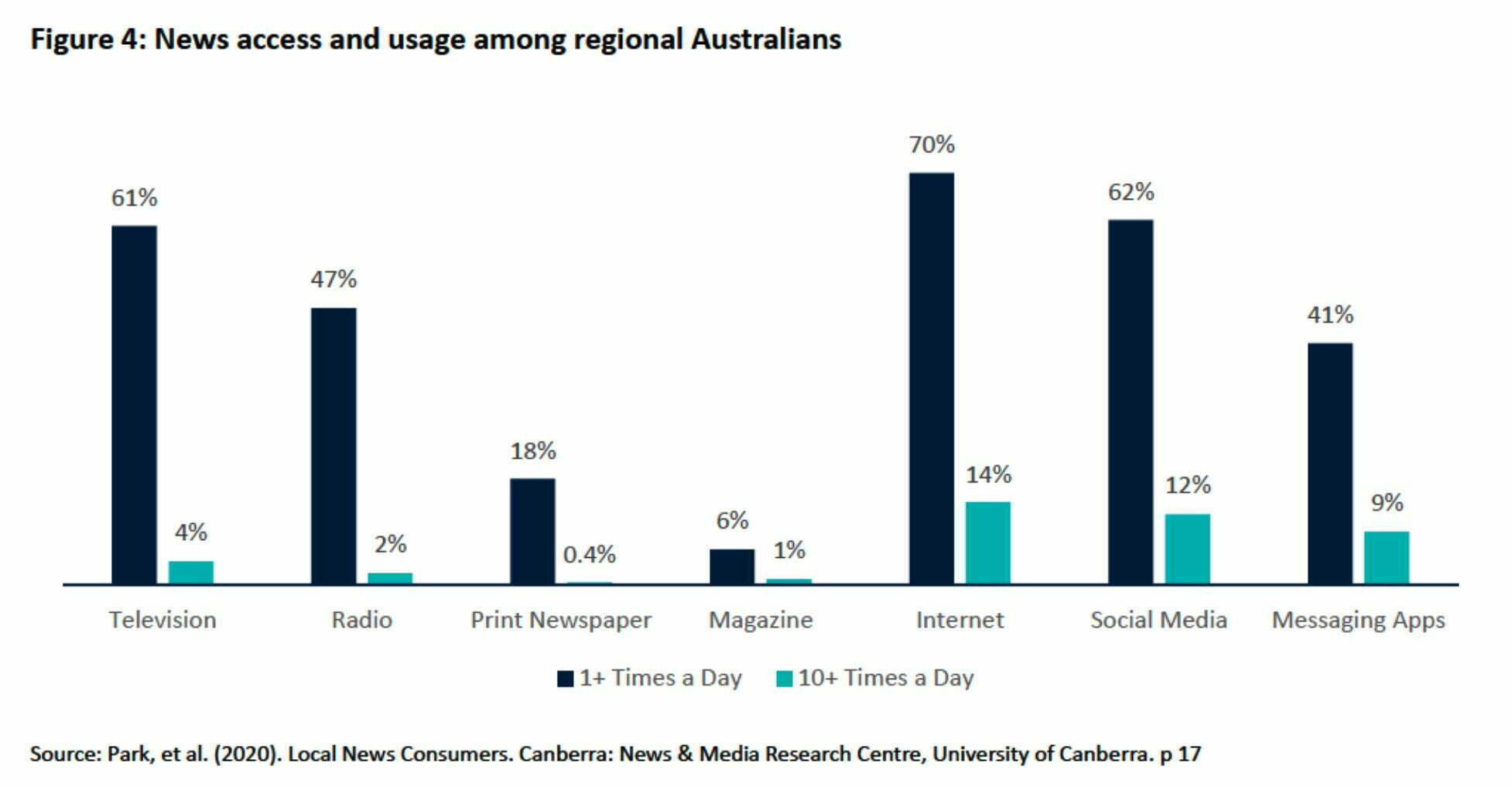 Many of the submissions tell stories of small local newsrooms under pressure while trying desperately to provide a service to local communities.

Two submissions come from Mparntwe/Alice Springs, where the printed version of the Centralian Advocate was scrapped in 2020, like many News Corp regional publications.

“This has left a gaping hole in the communication and dissemination of information throughout Alice Springs and the entire region of Central Australia, a population of approximately 50,000 people,” says Robyn Lambley, the local MLA.

While locals are organising to fill the gap, she says this absence for two years “has been a major blow to the economy and social fabric of our town”.

Alice Springs Town Councillor Jimmy Cocking urges government support for news media, which “needs to be recognised as a public good and in regional areas, an essential service”.

“The reporting of news in regional communities is important for community wellbeing,” says his submission. “It is evident here in Alice Springs that the departure of a local newspaper has left many saying ‘I don’t know what’s going on in town anymore’.”

From Blackall in central-western Queensland, The Barcoo Independent , has called for government advertising support, while The Bugle at Kiama in NSW urges governments to do much more to support small publishers instead of preferential support for big corporates.

The Cape York Weekly gives insights into the practical and logistical challenges for publishers in remote areas, and stresses the importance of local publications.

“Throughout the pandemic, there has been no ‘fake news’ about the virus in the newspaper,” says their submission. “We have worked closely with health services, governments and councils to keep locals informed. And we are trusted. Certainly more trusted than some of the bigger players.”

Also from Queensland, the Today News Group, a group of independent publishers that includes former News Corp employees made redundant in the 2020 closures, stresses the importance of a local paper as a journal of record for the region “that gives a voice to the people and helps bind community and build identity…”

The group says that one of the biggest challenges to local independent news businesses is the emergence of local government marketing departments that are employing journalists and producing ‘news’ in various digital formats under misleading names that give the impression of independence.

“For example, the Bundaberg Regional Council has a ‘news’ service called ‘Bundaberg Now’ that is a concept we believe poses a very real threat to independent local news in Australia,” says the Group’s submission.

Declaration: Croakey Health Media is preparing a submission to the inquiry and acknowledges the Committee for allowing us an extended deadline.

PrevPreviousBonus payment to aged care workers is symptomatic of wider policy failures
NextTwo years later, where is the help for those who need it most?Next