Close the Gap leaders are urging Federal, State and Territory Governments to renew their commitment to funding for the health programs of the Closing the Gap, which expires in June, according to this statement from the Australian Human Rights Commission.

So what is the difference between the work of the Close the Gap and the Closing the Gap campaigns?

Thanks to Dr Tim Senior for allowing republication of his article explaining this, from the blog AMS Doctor which is a place for “personal reflections, comment, discussion by and for doctors working in Aboriginal Medical Services or those who want to understand their work better”.

Sign up to support the Close the Gap pledge

Today is National Close the Gap Day. A few months ago, there I was publicising it on Twitter, and I got into a conversation with someone critical of the campaign. They said it “raised money to promote government interference in Aboriginal communities.”

I think the Close the Gap campaign and Closing the Gap were being thought of interchangeably.

I’ve seen confusion about this, both in social media and in real life, even among those who are quite involved in working in Aboriginal and Torres Strait Islander communities. (Alright, that was me. But I’m not the only one!)

So here is your cut out and keep guide (Warning – print off before attempting to do any cutting!) to Close the Gap and Closing the Gap.

This is the campaign which started in 2008, responsible for the National Close the Gap days. It was kickstarted by the Social Justice Report written by Tom Calma setting out a human rights based approach to health.

A broad coalition of Aboriginal and Torres Strait Islander organisations and non-indigenous health and social care organisations worked together to promote and build support for the cause and set out how equity might be achieved.

The Steering Committee is co-chaired by the Social Justice Commissioner, Mick Gooda, and the co-chair of the National Congress of Australia’s First Peoples, Jody Broun. You probably know Oxfam are involved, as they have been responsible for the campaigning expertise, but there are many other organisations involved, such as NACCHO, AIDA, the Healing Foundation, the AMA, the RACGP, ANTAR, even the NRL. You can see a full list here.

Close the Gap an unprecedented coalition of support across many organisations. To date 185,000 people have pledged their support. You can do so too. (And you won’t find it asking for a donation, though you can buy some nifty merchandise!) You could argue that the campaign has been such a success that government used the same terminology! 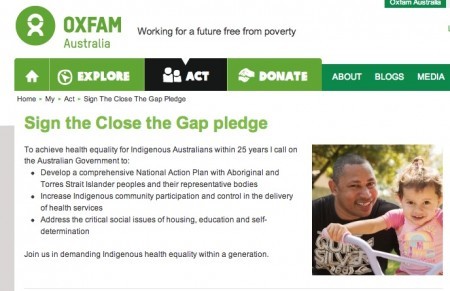 This is the name given to a series of government programs with the aim of achieving Indigenous equity. It has set 6 goals, not all of them health related, and each year at the opening of parliament the government makes a statement to parliament of progress on the goals. (The Close the Gap produce a parallel Shadow Report, and it’s worth reading both!)

In the health arena, Closing the Gap is responsible for initiatives like the Practice Incentives Program, the Closing the Gap PBS Co-payment to make prescriptions affordable, and measures to promote access to specialist and multidisciplinary medical care.

Why do I need to know this?

I’m biased, but I think it’s worth knowing this difference.

The Close the Gap campaign is independent of government and is able to offer policy advice and criticise policy. As it is led by Aboriginal and Torres Strait Islander organisations it is able to represent what Indigenous communities around Australia need to improve their health. The Campaign itself is not just a campaign, but models the ways of working in partnership for which it advocates. You can confidently support the campaign knowing that you are supporting Aboriginal and Torres Strait Islander people making decisions for themselves and taking leadership in health.

That’s not to say that Closing the Gap should not be supported. Seeing bipartisan support for one of the most important issues facing Australia today is not to be taken for granted, especially in the current political climate. There are some undoubtedly good things in the Closing the Gap measures, and the program certainly talks about working in partnership with Aboriginal and Torres Strait Islander communities, and I believe they do genuinely want to do so.

Looked at from an Aboriginal or Torres Strait Islander person’s perspective, though, government initiatives and commitments need to work hard to develop trust in communities.

For over 200 years now, governments have been engaged in doing things to Aboriginal people, starting with massacres and missions and continuing with the forced removal of children from their families, which continued up to 1970.

Every day in my clinical work, I am dealing with the consequences of this right now. It’s easy for non-Indigenous people to think this is all in the past, but right now the Northern Territory Emergency Response, initially called the Northern Territory Intervention, is going on. Human Rights legislation had to be suspended to do this, and it is an action that has been widely criticised by Aboriginal communities across Australia and the UN Special Rapporteur on Human Rights.(PDF).

For Aboriginal people, this is part of a continuing history of governments doing things to them. It’s worth noting in passing that this program is now called Closing the Gap in the Northern Territory.

(Incidentally, for some insight into how policy is determined by its media coverage, read my Croakey post)

You can see the effect of this history, just by listening to what Aboriginal people are saying. For example in this paper about the care provided in Aboriginal Medical Services, there is a poignant exchange between Aboriginal health workers which speaks volumes about trust.

In this poignant interaction between a board member (P1) and AHW (P2) both felt there was a hidden agenda to eliminate AMSs altogether, replacing them with poor quality ‘mainstream’ health care.

P1: They (government community health services) shouldn’t think that they are superior to the AMS team. That sort of an attitude, they should cut it out.

P2: That attitude will stay around for a long time until the boss of this organisation says something to them.

P1: They say that we need their services but that doesn’t mean they should come and tell us to do this, do this, do this… They try to bung low-grade services onto us… If we look a little bit further down the track, say five or ten years, there won’t be any more AMSs. They will have become mainstream services.

P2: That’s a plan of the minister… low grade services.

Close the Gap is led Aboriginal and Torres Strait Islander organisations themselves with links back into communities across Australia. It has built a broad based coalition of support and is being listened to by governments. It is not responsible for the delivery of policy, but is able to set out what needs to be done to achieve health equity in a generation.

A final word – it is hard to remember, so here’s a handy mnemonic I made up: To remember the difference between Close the Gap and Closing the Gap, just think that the ING stands for In Government. Easy.

Now all you need to do is support the Close the Gap Campaign, sign the pledge and join an event today. It’s a cause that all Australians can support.