Screenshot of the Virtual Empathy Museum, opening a door to digital stories

A Virtual Empathy Museum has been established with the aim of helping nursing and other caring professions to become more compassionate.

And an Empathy Symposium will be held in Sydney in December, with the aim of having empathy included as an integral component of every nursing curriculum, reports Marie McInerney below.

This is the final Croakey Conference News Service report from the Australian College of Nursing’s 2019 National Nursing Forum (see all the #NNF2019 stories here).

Sydney nursing educator Dr Samantha Jakimowicz’s interest in ‘compassion fatigue’ in the caring professions was sparked when working as an intensive care nurse around ten years ago.

One of her patients was a young man with significant mental health issues who was on a ventilator in a ward without windows.

He hadn’t been outside for weeks.

“All he wanted to do was to see the sky,” Jakimowicz told Croakey.

After some negotiation, she finally organised for him to be taken into the atrium of the hospital so he could look out the windows.

The intensive care doctor caring for the young man later sent Jakimowicz a podcast on empathy fatigue, saying the experience made him realise he had become fatigued – but their discussion about the patient’s needs had reinvigorated his sense of compassion.

This case led her into research on compassion fatigue, and to being part of a collaborative project, the Virtual Empathy Museum, which is gathering, producing and sharing resources to build or reignite empathy among health professionals.

The project is led by UTS in Sydney, where Jakimowicz is a nursing lecturer, and funded by an Australian Technology Network of Universities grant.

Free to all, the Virtual Empathy Museum opens virtual doors to many resources, including patients’ stories.

In one of those, Greg, a homeless man, talks about what it’s like to present to an Emergency Department where clinicians presume he is an addict.

“I’d rather be sick than be shamed,” he says in a video that traces his life and how he came to be homeless.

The Digital Stories room also features the experience of a young woman who acquires a brain injury through a car accident. As well as much fabulous care, she remembers how some nurses made her feel “embarrassed, humiliated” with suboptimal levels of care that also caused distress for her mother, a registered nurse.

A third video tells a gruelling story of family violence. Trapped with a controlling and violent man and not seeing any escape, ‘Eloise’ explains away her bruises as a fall, only to be told by her midwife that “we can’t help women like you if you won’t help yourselves”.

Each story includes links to further resources and questions for health practitioners to reflect upon.

It’s harm that is experienced by many people and communities in Australia, including Aboriginal and Torres Strait Islander patients, people from non-English speaking backgrounds, and – as two Royal Commissions are currently investigating – people in aged care and people with disability.

In her work, Jakimowicz also highlights the 2013 Francis Report into serious failings at the Mid Staffordshire NHS Foundation Trust in the UK from 2005-2009 that concluded staff treated patients and those close to them “with what appeared to be callous indifference”.

Jakimowicz told the forum that compassion is not an add-on in health care, with clear evidence of its critical role in patient satisfaction, experience and outcomes, as well as for the workforce and the broader system of care – and the big cost of care that is “devoid of compassion”.

Jakimowicz says researchers are trying to pinpoint why studying medicine and nursing has been associated with a decline in empathy levels but the worrying phrase “nurses eat their young” may suggest some answers, with students exposed during clinical placements to harmful workplace cultures.

“If they’re seeing non-empathic care or non-compassionate care, they will follow that because they are being mentored by these people, they want to fit in and belong,” she said.

Pressure and lack of support for health practitioners working under stress and for long hours are also likely contributors, and Jakimowicz also raised concerns about curricula that do not “prioritise humanistic values”.

“We’re teaching a lot of technical skills. They’re obviously required but so are the empathic skills,” she said.

The good news is there is also clear evidence that empathy can be taught and that there is an imperative for health systems to do so, says Jakimowicz, who has just returned from a Compassion in Action conference run by the not for profit Schwartz Centre.

Keynote speakers included Dr Stephen Trzeciak, co-author of Compassionomics, who spoke about how compassionate care is impacting on the bottom line in US healthcare.

Jakimowicz is leading the rollout at UTS of the Schwartz Round, a forum for clinical and non-clinical staff to come together to discuss the social and emotional aspects of working in healthcare.

The UTS collaboration is also staging its first Empathy Symposium in Sydney in December, aiming to “start a conversation that hopefully will lead to empathy being included as an integral component of every nursing curriculum”.

Jakimowicz has high hopes, saying she believes compassion and empathy are “contagious”.

“If the culture is empathic and compassionate and, if you get one or two people starting this, it will build and then the people who aren’t being empathic will be called on by their colleagues or asked to go and get help.” 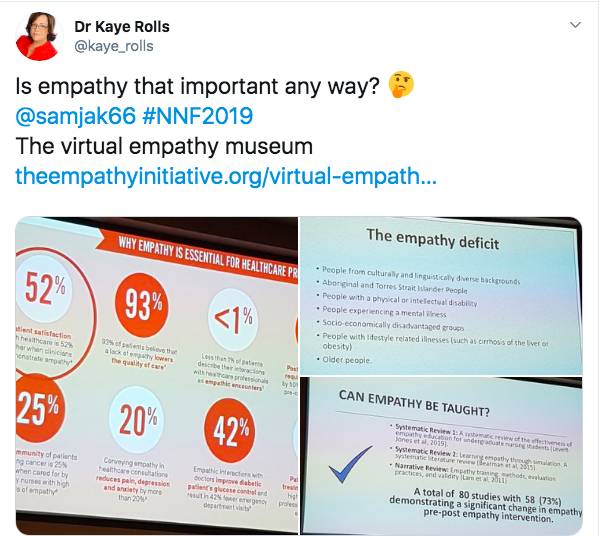 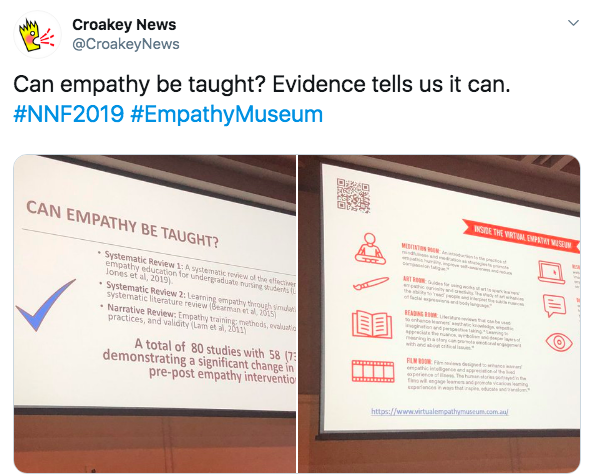 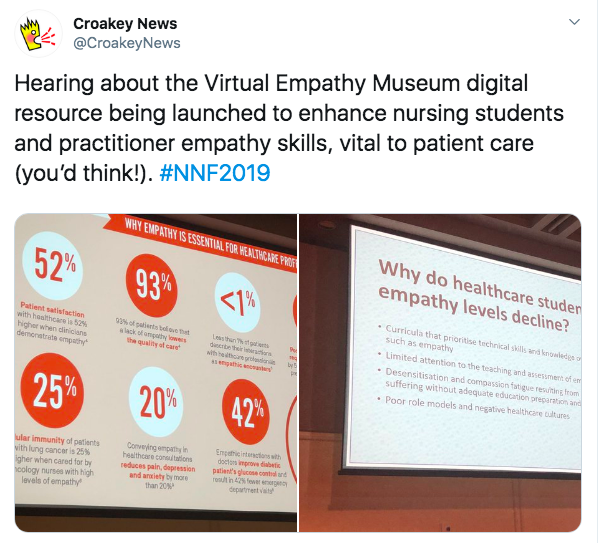 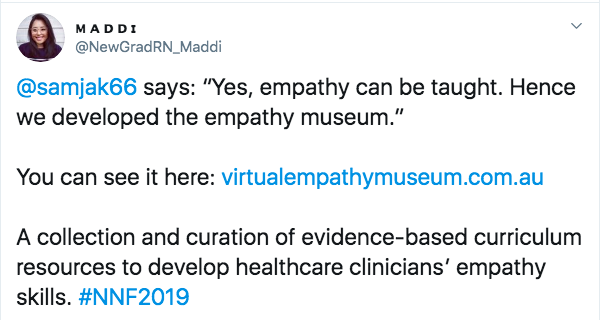 Readers may also be interested in the work of Mary Freer and the Compassion Revolution: link here.

These were the analytics captured on the final day of the #NNF2019 conference.