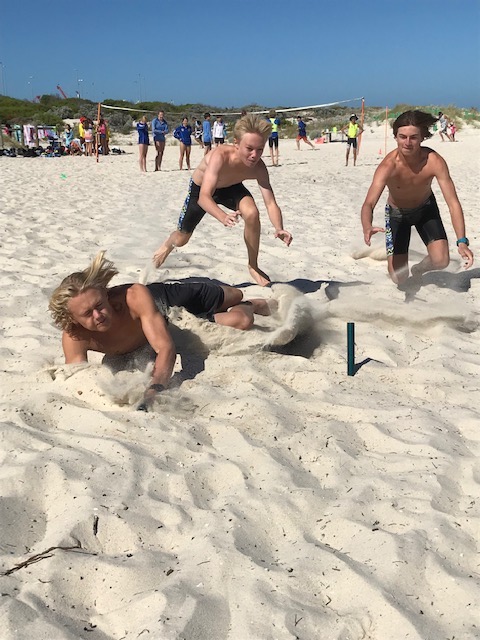 The feel good factor – does watching elite sport make you want to participate in sport?

Everyone knows that playing sport has a multitude of health benefits but are there any benefits from simply watching others participate in a sporting activity or event?

However, Dr Stoneham urges caution in using this study to argue for more public funding for elite sporting events, pointing out that the study has a number of limitations, including a small sample size of people who were mostly physically active to begin with.

I love playing sport but other than being an Olympic and Commonwealth Games junkie, I don’t really watch much live sport on TV. Nor do I choose to attend many sporting events.

However, being one of seven children, five of whom are brothers, I vividly remember many an afternoon being driven endlessly to football, tennis and surfing events. I was the eternal spectator. I knew all the rules, and although I watched with mild interest, I was never tempted to participate in any of the sports my brothers played.

So it was with interest that I read this month’s JournalWatch article that examined the extent to which attending major sporting events can lead to subsequent changes in the sport participation behaviour of spectators.

Published in Health Promotion International, this research covered seven single-sport events of World or European level held in the UK during 2014 and studied spectators (aged 16 and over) who attended one of these events.

Previous researchers have found that watching some sports does actually bring health benefits. Khairy and colleagues from Royal West Academy in Montreal found that watching ice hockey substantially increased heart rates. This increase was identified by measuring the pulse of spectators. For television-watchers, the increase was an average of 75%, while those who watched it live, saw their heart rate rise by 110%.

The researchers suggest that this is equivalent to moderate and vigorous exercise respectively. As can be expected, heart rates were highest during overtime and if there were scoring chances.

But don’t get too excited – next time you are watching the Davis Cup on TV and think to yourself, I should really go for a run….take your own advice. The researchers state that watching an ice hockey game is not a substitute for physical activity and although the experience may raise the heart rate, it does not carry the same benefits on cardiovascular health as does exercise.

Another common myth around sport spectatorship, is that when a country bids for and hosts a high profile sporting event like the Olympics, part of the all-important plan for the legacy often includes the promise that more people will take up sport as a result. This is referred to as the “demonstration effect”. Sydney promised this, Athens promised this and London promised this.

So let’s bust this myth.  In Australia, there was a decline in physical activity participation between 1997 and 1999, and no change between 1999 and November 2000 (the Sydney Olympics were hosted in the summer of 2000).

After the London Games, Sport England figures for participation in sport showed that the number of people doing at least 30 minutes a week of sport at a moderate intensity had risen to 15.5 million. This was 1.3% higher than the previous year, so there was cause for optimism.

While it was all looking good, recent data indicates that just three of the 26 Olympic sports – athletics, cycling and gymnastics – had seen statistically significant increases in participation since 2012-13, with 15 other sports recording a fall. Furthermore, it was found that since the Olympics, once-a-month participation figures showed nearly 700,000 fewer adults are playing nationally funded sports.

The article reviewed for this column really wanted to identify if people felt inspired to either participate or participate more often after attending a high level sporting event. Led by Girish Ramchandani from Sheffield Hallum University, the study captured baseline data from a sample of spectators at seven elite events using a face-to-face survey. Follow-up data were captured using an online survey at least nine months post-event.

The final analysis was based on 258 people for whom both baseline and follow-up data were available (matched pairs).  The researchers used the Transtheoretical Model of Change (TTM) to understand a change in attitude and behaviour associated with changes in participation within sport after attending these major sporting events. A similar study used the Theory of Planned Behaviour (TTM)  to understand motivational factors behind individuals’ intention to become more active in response to the 2010 Winter Olympic Games in Vancouver.

The evidence from this research points to a small net positive staged change in sport participation behaviour among a relatively small sample of people following their attendance at the major sports event in the UK in 2014. The study found that many of the spectators who watched elite sports were already active.

So the findings certainly would not guide policy development.

However, the findings do become more useful when considering leveraging efforts to encourage spectators who are in the early stages of the TTM (precontemplation, contemplation and preparation stages) to attend elite sports events, in the hope that they will become inspired and move through the TTM to the action and maintenance stages.

One recommendation within the article to engage these less active people to attend sports events was to offer rewards or incentives such as the opportunity to meet elite athletes and hear about how they got started in sport.

Another recommendation focused on providing promotional messages linked to events that could be used to signpost sedentary individuals to opportunities to participate in sport with other inactive people at a level that is appropriate to their skill and ability, in order to encourage them to move towards ‘preparation’ and beyond.

I think there is an automatic assumption that if you watch sport, you would be more likely to go out and have a go, enabling people to copy the behaviour they see. Yet last week I went to the ballet and in no way did it give me enough of a feel good factor to want to pirouette out of the theatre!

Theoretically there are three ways in which watching sport might increase participation in sport through the “demonstration effect”. The first, as this research has shown, is to inspire people who already do sport to do it more often. The second is to encourage those lapsed sporty spices to contemplate re-engaging in the sport and lastly, it may inspire people to have a go or try a sport they have never done before.

Sport is vitally important to the Aussie culture. But maybe we expect too much from sport.

Perhaps it’s time to just let sport be a pleasurable experience to watch with family and friends. One where we experience the adrenalin rush and give a fist pump when the Dockers score, or we find ourselves sitting on the edge of our seat with a high level of suspense as the West Coast Fever score another goal.

Sport elevates our spirits. It brings us together. It makes conversation. It bonds us.

The purity of motivation and intent, coupled with the excitement of competition and the buzz of winning or losing, gives us something we rarely get elsewhere…and maybe that should be enough without any added expectation of sport being one of the motivators for people to rush out and sign up to their local sports club.

Improving the physical health of people with mental illness

The Health Wrap: on budget day, and with an election looming, it’s time to get out the calculators

PrevPreviousRural health leaders call for action on planetary health, inequality and the Uluru Statement
NextBuilding a ‘raft of bitches’ in the fight for equity in the health workforceNext