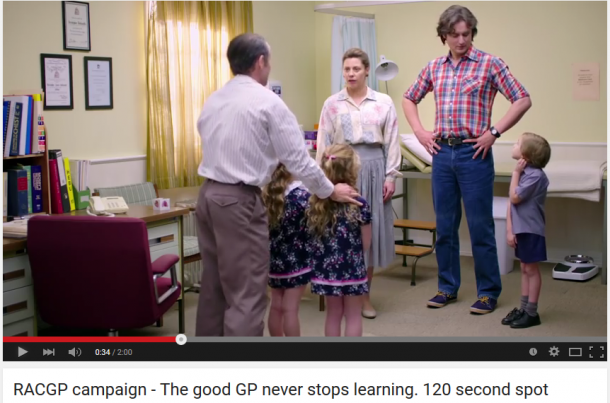 The Royal Australian College of General Practitioners has launched a promotional video as part of a community awareness campaign – and the early reviews are mixed, particularly depending on which side of the consulting desk you sit and how you feel about diversity and gender issues.

Thanks very much to GP Dr Edwin Kruys for permission to cross post his response to the video, which was originally published at his Doctor’s Bag blog, and to patient and healthcare advocate Jen Morris for sparking conversations about the video on Twitter and writing the longer piece below for Croakey.

But first, see the video here and this statement from the RACGP about what has driven its ‘The good GP never stops learning’ campaign.

And let us know what you think.

The first video of a national awareness campaign highlighting the value of general practice has brought tears to the eyes of many GPs. The amazing video from the Royal Australian College of General Practitioners (RACGP) certainly creates an emotional response.

The clip starts in the 70s, when home pregnancy tests were not widely available. The young, fresh GP is visibly happy to bring the good news to a couple in his consulting room (“You have a baby on the way”). There is no computer in the room, lots of paperwork on the doctor’s desk, and we see furniture and filing cabinets from times gone by.

As we follow the couple and the doctor over the years, the consulting room changes too. If you look closely (admittedly this may be of interest to medicos only) you will see a beautiful old mercury sphygmomanometer on the trolley. Computers begin to appear on the desk. Time flies in the video; in a matter of seconds the GP and his patients age and new family members enter the consulting room.

Towards the end one of the children has become a mother. The GP, now with grey hair, says to her “we have quite the journey ahead of us,” as he gets up from his chair with the visible difficulty of an older man.

Indeed, sharing the journey through life is one of the aspects that sets the GP apart from other disciplines. And just like in the video we’re there for the minor ailments – the nits – as well as the big and often emotional life events, such as a cancer diagnosis or the death of a spouse. I think the video brings this message across very well and that may be why it triggers an emotional response.

But the video also contains another message. Observant viewers will have noticed that the GP has two framed certificates hanging on the wall at the beginning of the clip and, as time moves on, more certificates follow.

The importance of education and learning gained through fellowship of the RACGP is a key message of the campaign. A voiceover at the end tells us: “The good GP is with the Royal Australian College of General Practitioners, because the good GP never stops learning.”

There is of course, as always, criticism. Some have commented that telling patients they have to do something may not be the most effective way to encourage change – like smoking cessation. Good GPs have a conversation with their patients. Others have mentioned the video doesn’t reflect our multicultural society or the gender diversity in medicine.

Fellows of the Australian College of Rural and Remote Medicine (ACRRM) may rightly say that they too are good GPs. And lastly, there seems to be a disconnect between the clip and the message about lifelong-learning at the end. It may be easier to brand general practice than a GP college.

I believe some of the criticism will be addressed in future campaign material – but it is also good not to lose sight of the bigger picture. The campaign aims to improve the recognition of GPs and general practice. If it’s as successful as the RACGP’s You’ve been targeted campaign, the promotion of general practice will benefit all those working in primary care, and more importantly, our patients.

Personally I hope the campaign opens the eyes of some politicians. Australians rate their doctors in the top-3 of most honest and trusted professions and they visit the GP on average 5-6 times per year. GPs are good value when it comes to spending tax payers money: The average GP consultation costs $50, compared to for example $400-600 per service in a hospital emergency department.

It is a good idea to reduce waste and duplication in healthcare, but poorly targeted cuts and freezes will do more harm than good to the health of Australians. We must also reduce the amount of red tape and stay away from more bureaucracy, like NHS-style revalidation – so doctors can look after their patients instead.

The success of a campaign depends on the people who support it. In a video message directed at doctors RACGP president Dr Frank Jones said: “Talk to your patients and key people in your community about the importance of general practice. Our training and the accreditation standards are why the good GP never stops learning.”

The video touched the hearts of many GPs, but in the end it’s the impact on patients that matters most. I hope its positivity will be contagious. Watch it and share it.

Dr Edwin Kruys is a GP in the Sunshine Coast, Queensland. He blogs at Doctor’s Bag and tweets as @edwinkruys.

The new RACGP TV video has provoked a strong positive emotional and sentimental response among many GPs, most of whom have, quite rightly, felt under-valued and under attack in the current political climate. Yet the reaction from doctors and patients has been starkly different. The former, in general, have been touched and felt proud and heartened. But the latter, the alleged target audience, have been left largely confused, alienated, and disengaged.

I am a passionate advocate for the value of GPs and primary care. So initially, I was glad to hear that a concerted public defence of our GPs was being mounted. And that it aimed to capture what makes GP care so special – continuity, relationships and the journey of life. But I am disappointed.

From a patient perspective, the most glaring thing about the ad is that across 90 seconds, encompassing 10 consultations, the GP dominates 100 per cent of the dialogue. No patient or their family member says a word. Not one word. The two minute version is no better. As a result, the campaign represents the idealised ‘good GP’ as one who delivers news – and commands – to artificially muted patients. No conversation. No questions (from patient or doctor). In light of this, the GP’s command to his silenced patient that “you have to keep talking about your feelings” is especially and ironically incongruous.

The campaign is hailed as ‘the beginning of a conversation’ with patients and the community about the value of GPs. But when the flagship ad gives a voice only to the GP, it does not promote public confidence that this is an institutional culture interested in genuine two-way conversation. There are also questions about how the lack of diversity, and tired gender, family and social stereotypes portrayed (including man as stubborn patient and woman as emotional patient) will sit with a modern Australian audience.

But perhaps more importantly, the public are at a loss as to what the advertisement’s message to them actually is and what it aims to accomplish. It lacks a clear call to action, leaving patients asking ‘OK, but what do you want from me?’.

For a start, the campaign drastically overestimates public understanding of Australia’s medical training system. Generally, the public do not know, nor does the ad explain, what the College does. Several people, after viewing the ad, have come away thinking the College is an elite health service which patients can physically attend to see the best GPs.

Even if patients come to believe that good GPs are with the RACGP, and somehow understand what the RACGP does, what should they do with that information? The ad gives patients no guidance on how to find out if a GP is “with” the College. The general public has very limited knowledge about what acronyms on their GP’s letterheads represent. And there is no publicly-available register of RACGP fellows. Not to mention the overwhelming majority of GPs are RACGP fellows, so it’s hardly an appreciable consumer decision criterion.

However, patients are coming away with one clear but unfortunate message. That if there are ‘good GPs’ out there, there are also ‘bad GPs’. Beware. Claiming that the only ‘good’ GPs are with RACGP risks breeding unnecessary concern among patients of older GPs who are not RACGP fellows, or GPs who are ACRRM fellows. All of which risks undermining public confidence in the profession as a whole.

With some changes, the campaign has great potential. But it went wrong the moment the creators decided to go with the doctor-centric angle of ‘life-long learning’, instead of the patient-centric angle of ‘life-long care’. That decision, seemingly a product of trying to co-locate RACGP brand marketing with a broader pro-GP message, rendered the message irrelevant to the public.  And the tagline became entirely fractured from the ad’s narrative.

On first viewing, I expected a tagline like “GPs – there for life, care for life”. With something like that, the ad may well have hit the mark. Because its existing warm and sentimental tone successfully strikes at the heart of why patients love GPs. Instead, it ends with “The good GP is with the Royal Australian College of General Practitioners. Because the good GP never stops learning”. With that, the message shoots off on an inexplicable tangent. No longer ‘what GPs can do for you and our community’ but ‘what the College can do for GPs’. Patients care about the life-long learning of their GPs only insofar as it improves patient care, patient experience and community health. But no such link, or even a narrative about practitioner learning, is presented.

Our GPs should feel enormous pride in what they do. And if that were this campaign’s goal, it seems a success. But according to RACGP President Dr Frank Jones, this campaign “is directed at patients, to improve the recognition of GPs, general practice, and of the RACGP”. So while giving GPs a well-deserved morale boost is a welcome side-effect, it was not intended to be the main game.

This campaign came so close to a beautiful piece of advocacy. But the message, also rendered unpalatable by symbolic silencing of the patient voice, is muddied by co-locating brand promotion with profession advocacy. I do not know if the RACGP consulted widely with the public and patients to develop this campaign. But I believe if the campaign is to garner public support, a rethink is needed – adopting a patient-centric focus on life-long care, not practitioner education. I have spoken elsewhere about re-orienting public debates in this way, and the success of the RACGP’s ‘You’ve been targeted’ campaign in doing just that.  I have great hope that, if these issues are addressed, the resulting revitalised campaign could be a turning point in how we stand up for our GPs.

Jen Morris is a patient perspectives consultant, healthcare advocate, and healthcare quality and safety researcher at the University of Melbourne. She tweets at @jenwords.

And here’s some of the Twitter conversations that sparked this post, including interaction from Karen Price, co-chair of Women in General Practice Committee at the RACGP. 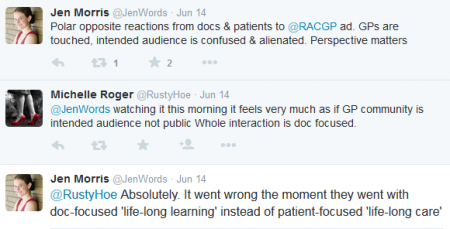 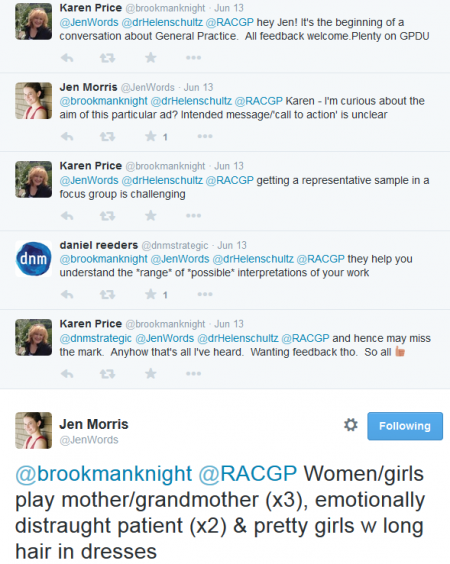 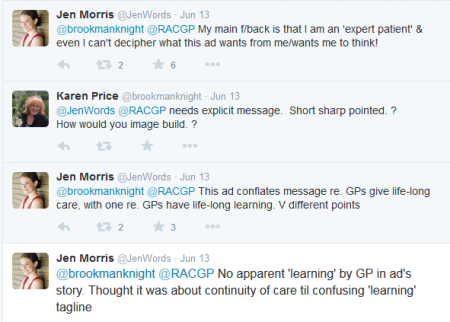