The Coalition Government has actively promoted its commitment to Australia’s medical research sector but will its policies give Australian researchers the support they need to pursue life-changing research or instead drive our science and technology sector back into the stone age? Dr Andrew Weatherall puts our current funding system for medical research and the Government’s planned changes under the microscope.

The Australian Research Council just announced a fresh round of funding grants and while a few researchers were celebrating, many missed out. As a novice researcher, looking on from the sidelines for this round, the situation looks a bit depressing.

The announcements (with a success rate of about 15% for Future Fellowships) come hot on the heels of the NHMRC announcements with project grant success rate dropping to 16.9% (7% for the newbies). Things look pretty grim for those looking to submit to the NHMRC for the first time next year.

Still, the new government is saying lots of pretty words about supporting research. So things are looking up, right?

This Government didn’t set up a free love party for scientists in the fire pit upon taking office. Since then there’s been reassuring noises about extending the terms of grants from 3 to 5 years (more on that below) and an exhortation from the PM to forget about the absence of a Science Minister and “judge us by our performance, not by our titles“.

OK, let’s do that. During the election campaign, announcements were made that peer reviewed grants of “ridiculous” projects would be rejected to potentially save more than $100 million and that $42 million would be cut from National ICT Australia (they only do minor things like help build the bionic eye).

The overall funding of NHMRC project grants dropped. Announcements for ARC Future Fellowships were delayed for so long that researchers already awarded but not announced needed to devote hundreds more hours applying for next year’s rounds for fear of unemployment.

There’s the wholehearted support for climate change science. The sort of support you demonstrate by disbanding independent authorities reporting and exploring it, rubbishing decades of research done by climate scientists linking the change in the environment to increased background risk of bush fires, failing to bother modeling your proposed approach to address the problem and taking the science so seriously that no ministers are going to tackle the issue in the latest international talks.

Then came the announcement that public service hiring freezes will threaten up to 1400 jobs at the CSIRO (more than 10% of the total planned cuts to the public service). Of course, the CSIRO doesn’t do much, right? Only this stuff: 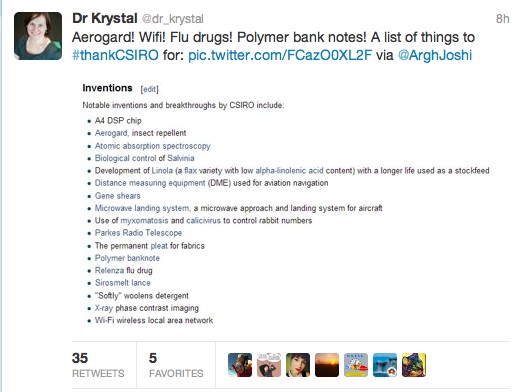 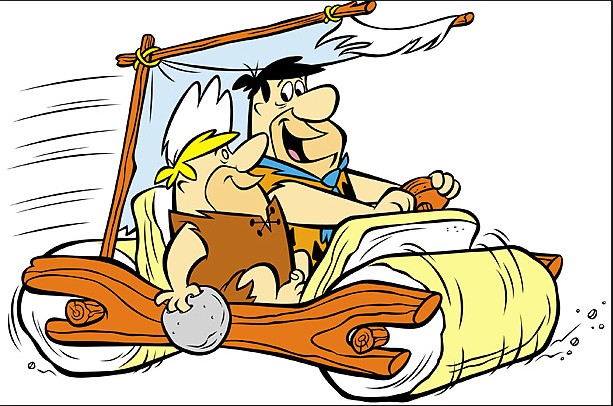 But The Good Stuff Gets Funded…

Well yes, good stuff does get funded. Excellent stuff doesn’t get funded though. 55% of the NHMRC project grant submissions were felt worthy of funding on peer review, but were awarded zero money.

Need an example? How about Dr Rachel Dunlop and team, who recently published work in PLOSOne showing how algal toxins might be associated with motor neurone disease and pointed the way to future treatments for a condition with a take-no-prisoners philosophy. The team may have to stop for lack of funding.

While we’re at it, is it tenable to think there are not more worthy projects in public health?

This area received only 8.5% of total project grant funding. In the context of rapidly growing health system costs, an apparent societal pact to achieve Herculean records in obesity rates and charlatan anti-vaccination prophets creating enclaves where forgotten communicable diseases can frolic, how can that make sense?

That’s before even mentioning the public health impact of climate change. If we can’t find funding in an area with the sort of benefit to cost ratio that makes a Wall Street trader think the water supply is spiked with LSD, we’ve got problems.

Obviously there’d be lots of solutions on offer, right? Well I’m not certain but surely a few responses to ensure funding for big items are needed:

Announcing 5 year grants instead of 3 year grants doesn’t cut it. Unless it’s backed up with more funding it’s going to shred future research.

Adding 5 year terms without significantly enhancing funding levels and particularly programs for early career researchers just means money will be tied up with people who’ve been doing it for years, while junior researchers are used to write papers (or sew leather elbow patches on Professor’s jackets or something) and eventually spat out.

So increase the cycle duration but only if you’re going to build a road that early researchers can actually tread.

A review by the NHMRC is due next year. They are apparently considering many options including permanently open submissions. Watch this space but you have to hope they shake things up substantially.

Other suggestions are floating about and bear at least some consideration. Take, for example, the suggestion that it should all be left to a formula. Worth interrogation, although maybe adding modifications to encourage newer researchers and anyone, anywhere who might choose to research somewhere other than a big university would open up new avenues.

While philanthropy could do with a boost in Australia, more interesting would be investment vehicles that allow direct public engagement with research funding such as social investment bonds. Where are the Australian examples of places like this, providing opportunities for innovators to find investors?

You know what happens when the Australian car industry feels threatened in a manner similar to an 8 year old receiving a gentle suggestion they might stop breast feeding? They come out swinging.

What happens when research funding is under threat? The head of the NHMRC tells junior researchers they should give up and look elsewhere.

If research is going to be constantly under threat of being eaten, maybe we should aim to not roll over and take it, but be a little more like this porcupine.

The time has probably come to take the Government’s words of support as an oasis teasing thirsty researchers wandering deliriously in the funding desert.

As a baby researcher, the only real option is to start looking for a different camel to ride into civilisation.

Another version of this article was first published at theflyingphd.wordpress.com a blog for sharing the personal experience of undertaking a PhD as well as other shiny medical distractions that catch the eye.

Dr Andrew Weatherall is a prehospital doctor with CareFlight in Sydney and a paediatric anaesthetist at The Children’s Hospital at Westmead. In his spare time he is undertaking research in monitoring of prehospital trauma patients as part of a PhD.