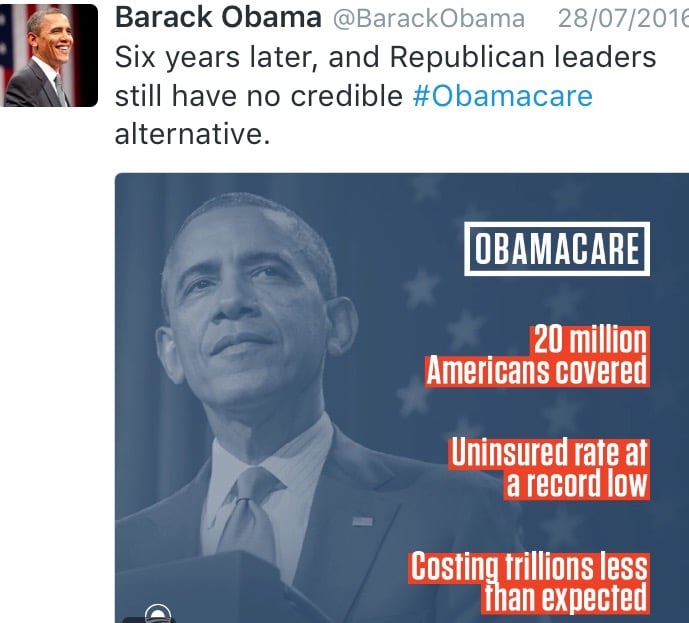 The health policies of the US presidential candidates

On November 8 this year when US voters go to the polls, three out of four of them say healthcare will be a very important factor in their choice of the best candidate.

Dr Lesley Russell, a regular Croakey contributor and tireless Australian health policy analyst, also has considerable experience in the development, enactment and analysis health policy in the US.

In the post below she takes a look at what the US public have to choose from if they select their new leader with the future of healthcare in mind. If only elections were decided on policies and potential outcomes rather than posturing and rhetoric, the future would be abundantly clear…

With the US presidential campaign in full swing and the looming presidential debates, there is the expectation, or at least the hope, that the focus might swing from Donald Trump’s crazy and provocative statements to policy.  Americans have a long list of issues they consider very important to their vote on November 8 and healthcare ranks high.

No issue could highlight the divide between the candidates more: Hillary Clinton, self-acknowledged policy wonk, has a long history of activism on healthcare reform and her website has a raft of detailed policies on healthcare, HIV/AIDS, Alzheimer’s Disease, autism, gun violence, addiction and substance abuse, and more.

Trump has paid scant attention to policy details and it shows on his website.  The section on healthcare reform is primarily a rant about what’s wrong with the (ACA – also commonly referred to as Obamacare).

However Trump has, as usual, made some conflicting statements about his position on healthcare, saying “..there will be a certain number of people that will be on the street dying and as a Republican, I don’t want that to happen. We’re going to take care of people that are dying on the street.” and “I am going to take care of everybody. I don’t care if it costs me votes or not. Everybody’s going to be taken care of much better than they’re taken care of now.”

The reality is – who knows what Trump’s position is?

Clinton has made it clear that she sees her main task is to safeguard and build President Obama’s legacy, especially his healthcare reforms. That’s why Obama will be on the campaign trail with her as one of her strongest supporters.

Obama knows how easily a presidential legacy can be undone – it took him just two weeks to undo President George W Bush’s edicts on stem cell research. That’s also why it’s really important that the Democrats win back at least the Senate and possibly the House of Representatives – so the new President Clinton can work with the Congress to craft her own legacy.

The make-up of the new Congress will also be important because, as with any major piece of legislation, the ACA is in dire need of legislative tweaking to make it work better. This has not happened since it was enacted, because of Republican intransigence.

Pushed by Bernie Sanders, Clinton has resurrected an idea that had currency when the ACA was being enacted: that people (perhaps limited to people aged over 50) could buy into Medicare. This is actually a very smart idea and an economically sound step towards a single payer system.

Obama’s healthcare reform law continues to be divisive among Americans (as many people disapprove as approve), although opposition is slowly diminishing and is predicated largely on political affiliation (69% of Democrats approve, 44% of Independents approve and 14% of Republicans approve).

It’s fair to say that Americans are very confused about healthcare:  Medicare is very popular and 58% say they favour the idea of a federally-funded healthcare system that provides insurance for all Americans, with no recognition of how this contradicts their position on the ACA. This stance could be used by a Clinton Administration to sell her Medicare buy-in proposal.

Although Republican opposition to the ACA is strident, their position is solely focused on repeal. Republicans in the House have voted to delay, defund or repeal the law some 60 times. Nothing substantive has ever emerged to replace the ACA.

For all the antipathy, Americans of all political persuasions are increasingly likely to view the ACA as expanding their family’s access to health insurance and medical care. People like the benefits they are receiving and consequently repeal will be hard, if not impossible.

Over 20 million previously uninsured Americans have now gained health insurance cover; many more have had their insurance costs and coverage improved. It’s not just about providing health cover. The data show that people are better off and in better health. They are less likely to have medical debt or a need to postpone care, and more likely to have a regular doctor and be receiving preventive care. President Obama himself authored a recent article in JAMA to highlight these points.

More than 30 states have accepted federal funds to expand Medicaid. These states have seen improved healthcare quality, reductions in emergency department use and gains in self-reported health status. Hospitals are reporting reductions in the level of uncompensated care.  There will be opposition to efforts to undo this not just from voters but also from state and local governments and healthcare providers.

As a final point, it should be noted that it is anticipated that because both Trump and Clinton have high unfavourability ratings, some pundits believe that third party candidates will attract disenchanted voters.

Not surprisingly, Gary Johnson opposes federal government health insurance requirements, and he thinks, contrary to the evidence, that the ACA will cause the US economy to collapse.  Jill Stein, a former medical doctor, supports a “Medicare for All” single-payer health insurance system.

Shockingly, Stein along with Johnson and Trump, is an anti-vaxxer.  Just one more reason to hope November brings a Clinton victory!

*Dr Lesley Russell is an Adjunct Associate Professor at the Menzies Centre for Health Policy, University of Sydney.