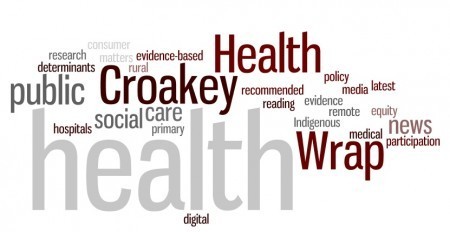 This week’s Health Wrap is compiled by my colleague Megan Howe, the Sax Institute’s Publications Manager. Enjoy the Wrap and tweet us via @medicalmedia or @meghowe68 if you have any ideas for future issues.

The Federal Budget’s impact on health and medical research continues to be dissected in the media.

The ABC said the budget would subsidise $1.3 billion in life-saving drugs and reported on Federal Health Minister Sussan Ley’s pre-budget announcement of $485 million to “reboot” the ailing national e-health system. The Minister pledged a new name (MyHealth Records) and the trial of an opt-out rather than opt-in system. But David Glance, Director of UWA Centre for Software Practice at University of Western Australia, argued on The Conversation that the e-records system remained fundamentally flawed, and the new policy would not be enough to save it. Croakey’s analysis of the budget is here. It described the outcome as “underwhelming at best”.

The Australian (paywalled) reported that almost $1.9 billion would be stripped from the health budget to allow for the “election war chest” including the establishment of the Medical Research Future Fund. According to the Sydney Morning Herald, health groups have been left scrambling by the budget’s lack of detail about which health programs face cuts to raise those savings.

Meanwhile, news.com.au reported that medicine prices could rise by up to $5 per PBS script (80 cents for pensioners) from January next year, and the Sydney Morning Herald said the cost of GP visits could rise because of the continued freeze on Medicare rebates. Later Health Minister Sussan Ley ruled out the PBS changes, but said the lost ‘savings’ would have to be found elsewhere: Croakey suggested we could learn from the report in The Lancet looking at how nations like Indonesia and Iran are funding health by getting rid of fossil fuel subsidies.

Writing from his hospital bed where he is being treated for multiple myeloma, Dr Rick Kuhn, adjunct reader in sociology at the Australian National University, questioned the priority the government gives to health.

When it comes to science and research, the ABC reported that the budget contained ‘mixed and confusing messages for Australian science’ while in an analysis on The Conversation,  Les Field, Vice-President and Deputy Vice-Chancellor (Research) at UNSW, said the government’s science budget appeared “to be treading water”.  John Rice, Executive Director of the Australian Council of Deans of Science, agreed, saying that damage done to science in the 2014 budget had not been undone. But a more positive note was struck by astrophysicist and Nobel prize winner Brian Schmidt, who wrote in The Australian (paywalled) that the budget could mark a turning point for Australian science, which had been lost in the wilderness for the past few years.

The AMA provoked a war of words with the Government over its post-budget announcement of funding for a new medical school at Curtin University, WA. The Guardian reported on AMA President Dr Brian Owler’s description of the plan as a “calamitous” captain’s call by Prime Minister Tony Abbott.  Treasurer Joe Hockey hit back, calling Dr Owler’s comments “not fitting for someone representing a great profession” and “out of order”.

According to the West Australian, WA Health Minister Kim Hames has guaranteed enough training places for all the new medical school students. But writing on The Conversation, Michael Vagg warned that the school could create graduates who end up “driving taxis or flipping burgers to make ends meet” once they finish university, due to a lack of intern and training places.

In some good public health news, the World Health Organization (WHO) declared Liberia “Ebola-free” after no new cases were recorded in the country for six weeks, BBC reported. But the decline in cases in West Africa means trials of two experimental Ebola vaccines are unlikely to provide enough useful data on how well they protect people against the deadly virus, according to the ABC.

The news that 35 new cases were reported in Guinea and Sierra Leone in the past week, four times as many as the week before, was a reminder that the virus would “not go quietly”, a WHO official said. That point was highlighted by the remarkable story of the doctor who was thought to be cured of Ebola, only to discover weeks later that the virus was still lurking in his eye – which had changed colour from blue to green.

Croakey said the Ebola tragedy could “be seen as a predictable outcome of the four decade retreat from primary health care.”

Meanwhile,  The Guardian revealed that anyone suspected of having Ebola in Australia could face quarantine or jail, under new biosecurity control orders passed by Parliament that allow health departments to force people to be vaccinated or quarantined in emergency situations.

Still on infectious diseases, the WHO issued advice for scientists and the media on how to name new human diseases, urging the adoption of “socially acceptable names” that do not offend people and countries or mention animals. Examples of the types of names to avoid included Spanish flu, Middle East Respiratory Syndrome or Legionnaires’ disease.

The Federal Government’s new $19 billion deal with the Pharmacy Guild will see controversial rules that restrict new pharmacies from opening near existing pharmacies extended for another five years despite numerous government-commissioned reviews recommending they be abolished, the Sydney Morning Herald reported. The deal’s $1.2 billion investment for pharmacy programs to move into primary care was not welcomed by the AMA or the Royal Australian College of General Practitioners, which claimed the government had “bowed to the pressure of the pharmacy sector”, according to the ABC.

The Australian reported (paywalled) that major script dispensing reforms in the five-year deal were likely to reap $5-$6 billion in taxpayer savings across the drug supply chain, with the existing mark-up system replaced with a volume-based payment and pharmacists given the option of competing on price by absorbing $1 of patient’s PBS co-payment.

The world’s first study on homophobia in sport revealed an alarming statistic: 70 per cent of respondents felt that youth sport in Australia was not safe and supportive for gay people, The Guardian reported. Difficulties facing transgender people in the Northern Territory were also in the news, with the ABC revealing that young transgender people were being forced to leave the Territory in order to access adequate healthcare and psychological services.

The burning issue of the threatened closure of Western Australian remote communities saw prominent Indigenous rights campaigner Michael Mansell accuse the Federal and WA governments of racism for bailing out drought afflicted farms while cutting funding for remote communities. Indigenous groups also warned that remote NT communities could be under threat, after the Federal Budget allotted a one-off payment to the NT government to cede control of them. Meanwhile medical student Amy Marshall, who has visited remote communities in the NT, wrote a moving, personal perspective about the issue in the Rockhampton Morning Bulletin.

Croakey’s  #JustJustice campaign is tackling the issue of over-incarceration of Aboriginal and Torres Strait Islander peoples. A significant case of over-incarceration is Fetal Alcohol Spectrum Disorders (FASD), which Croakey explored this week. This issue was also the focus of a recent paper by Professor Elizabeth Elliot, in the Sax Institute’s journal, Public Health Research & Practice.

Federal government plans to strip welfare payments from anyone charged with a serious criminal offence but confined to a psychiatric institution, could have dire  consequences state governments, health groups and legal advocates have warned. The Australian (paywalled) reported Mental Health Australia saying that people found not guilty due to mental illness would be confined for rehabilitation or treatment, but without any income, would  not be able to manage if released.

E-cigarettes continue to spark debate, with a Cancer Council audit of 1519 retailers in NSW revealing that four out of five shops sold e-cigarettes at the cash register alongside lollies and chocolates targeting children. Traditional tobacco was also in the spotlight, with the Sydney Morning Herald reporting that the tobacco industry has threatened to launch super-cheap cigarettes costing just $9 a pack in response to a growing black market in cheap, illegal tobacco, which health officials claim they are powerless to seize.

Also on the public health front, the NHMRC halved the blood lead level that it considers concerning, warning there was  no safe level of lead exposure, the Herald Sun reported. In an article on The Conversation and Croakey, Professors Mark Patrick Taylor and Bruce Lanphear welcomed the NHMRC decision but said it didn’t go far enough to protect children.

The ongoing debate over whether parents should have the right not to vaccinate their children was highlighted by moves in California to introduce laws requiring school children to be vaccinated regardless of their parents’ personal beliefs.

In new medical research this fortnight, we learned that human sperm has been grown in the lab for the first time and that a “groundbreaking” cystic fibrosis therapy could profoundly improve patients’ quality of life.

Too much time on computers and not enough outdoors is leading to an epidemic of short-sightedness, the Daily Mail reported and we were warned that many children thought to have asthma may actually be allergic to peanuts.

As debate raged over parental leave entitlements, The Age reported on a study showing children of working mothers do better.

Meanwhile, the BBC said the palm may hold the secret to future health, with new research suggesting that hand grip strength could predict the risk of a heart attack, stroke or dying young.

Finally, The Guardian told us why sitting on the toilet is bad for you in an article on the truth about poo.

PrevPrevious‘Friends of the MJA’ call for reversal of AMPCo decisions to sack editor, outsource to Elsevier
Next#RuralHealthConf kicks off – with songs, tweets, and a call for “fair care”Next