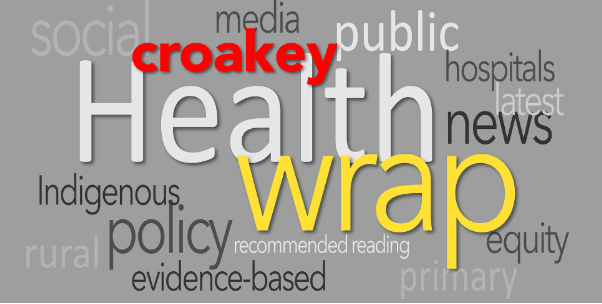 In the latest Health Wrap, Dr Lesley Russell takes a deep dive into whether the Federal Government is meeting its promise to provide more affordable medicines, seeking to get behind the paywalls that obscure how funds allocated to the PBS are spent.

She also drills into the latest figures on mental health spending from the Australia Institute of Health and Welfare, and provides an important and timely update on the work of the late Dr Fitzhugh Mullan, Professor at George Washington University, on the social mission record of American’s 141 medical schools, and how this approach might apply in dentistry.

And as promised, she finishes with a good news story – this one in Aboriginal and Torres Strait Islander health: the release by the Coalition of Peaks of their Engagement Snapshot which is guiding work towards a new Close the Gap partnership with Australian governments.

Health Minister Greg Hunt and his colleagues spend a lot of time pushing the fact that their sound fiscal management means new medicines are constantly being added to the Pharmaceutical Benefits Scheme (for example, the 2019 Budget promised to provide “more affordable medicines through record health funding”), but there is little public examination of what this really means and how funds allocated to the PBS are really spent.  The situation is aggravated because what little discussion there is generally takes place in medical and pharmaceutical publications behind paywalls.

Here is an effort to dig out some of the issues.

The 2019 Budget Papers (No 1, Table 8.2) show that the Government expects PBS expenses to decrease by 18.6 percent in real terms over the forward estimates, due largely to special pricing arrangements for some of the most expensive drugs (and, presumably, the fact that co-payments will continue to rise).

Perhaps the most interesting figure is the average dispensed price (patient payment plus government benefit) per prescription of PBS subsidised medicines. This was $64.33 in 2018-19, up from $64.04 in 2017-18. While I’m not smart enough to disentangle all the financial information here, given that in 2019 the patient co-payments were $40.30 for general and $6.50 for concession card patients (the majority of prescriptions), the Government’s costs averaged less than $60 per script for concession card scripts (the majority of scripts filled), and about $20 for general scripts .

Could we get a better deal?

There were 900 different medicines in 5,455 brands listed on the PBS as at June 30, 2019. This makes me wonder if a little more price competition could be generated. This question was posed in 2017 by Professor Stephen Duckett at the Grattan Institute in a report Cutting a Better Drug Deal, which  showed how patients and taxpayers could save around half a billion dollars a year if the federal government reformed PBS pricing practices. In a later article, Duckett highlighted how this would work.

Over 30 percent of the PBS goes to the Community Pharmacy Agreement (CPA) under which pharmacists are funded for delivering prescriptions and advice to consumers and for a series of programs and pilots around improving primary care services. The current, 6th CPA expires June 30 this year and negotiations for the 7th CPA have been underway for some time. There is little or no transparency around this and the billions of dollars involved. I wrote about how politically powerful the Pharmaceutical Guild is in this recent article for The Conversation.

Despite all the guarantees around the PBS, the ready availability of a number of medicines listed on the PBS, especially older generic drugs, is becoming an increasing problem. This is aggravated as more pharmaceutical companies are closing their manufacturing plants in Australia and where the global consolidation of the industry makes supply chains vulnerable (Australia imports 90 percent of its medicines).

In a 2017 survey of Australian hospitals the five most common medicines in short supply were antibiotics, anaesthetics, cardiology drugs, endocrinology drugs and chemotherapy. Such shortages can have a significant impact on patient care with little or no notice. In 2018 there was a shortage of the EpiPen device. Vaccines and even sterile water for injections have been in short supply.

In 2014, the Therapeutic Goods Administration established the Medicines Shortage Information Initiative –  a voluntary sponsor reporting scheme. However, this initiative has had major failings: some critical shortages are not reported and few clinicians are aware of the initiative. Generally prescribers and patients only become aware of a shortage when they are informed by a community pharmacist at the time of getting a script filled or when hospitals receive notification from a wholesaler after placing an order.

We might ask the Government what is being done to ensure that supplies of essential medicines and medical products are always available. The current coronavirus outbreak highlights perfectly how dependent Australia is on needed medicines and medical equipment (antibiotics, antivirals, facemasks, gloves) that are manufactured overseas.

In a statement of the Morrison Government’s 2019 election commitments made to the Pharmaceutical Society of Australia (PSA), Health Minister Hunt outlined efforts to address medicine-related harms, including working with the Council of Australian Governments (COAG) to declare quality use of medicines and medicines safety a National Health Priority Area.

This was agreed at the November 2019 COAG Health Council meeting. Hopefully this work will also address pain management and the national opioid crisis – a situation that is now described as “out of control”.

In the statement to the PSA referred to above, the Health Minister also announced a review of Australia’s National Medicines Policy (NMP). This policy was introduced in 1999 and has not been updated since. Much has changed in this space and there have been growing calls for its update.

However progress on implementing this review is slow and apparently it will not now start until March 2020.  The references I have seen in industry publications suggest that the focus is very much on the business side of the issues rather than on addressing consumer/patient needs.

A recent article in Australian Prescriber outlines what is needed in a National Medicines Policy 2.0.

Last month the Australian Institute of Health and Welfare released a report on mental health spending, covering the years 2017-18 and 2018-19. I suggest you read this (or my summary below) in conjunction with Jennifer Doggett’s excellent summary of the health section of the 2020 Report on Government Services by the Productivity Commission which was released last week.

In 2017-18 the total spending on mental health services in Australia was $9.9 billion. This does not include disability support or the federal contribution to public hospital costs. I think it also does not include spending by the defence forces and Veterans’ Affairs and patients’ out-of-pocket costs.

My four big take-outs from this report are:

Even when assessed in the broadest terms, there is much to suggest that the current expenditures are not well targeted.

The federal spend on mental health services, adjusted for inflation, decreased from $139 per person in 2013-14 to $135 per person in 2017-18. (That’s a shock!) The report says this might be due to a decrease in the cost of some medicines. Expenditure per person is increasing for young people but decreasing for the elderly.

The States and Territories spend accounted for 60.6 percent of the total mental health spend (some $6.0 billion) in 2017-18. Of this, $2.6 billion was spent in public hospitals and $2.3 billion on community mental health services.

PHI spend accounted for 5.5 percent of the total mental health spend (some $550 million) in 2017-18. Almost all of this was spent on same day private hospital care.

The 2017 figures provided are pretty worrying, especially given what they mean for the delivery of mental health services outside of major metropolitan areas.  I am endlessly making the case for better workforce planning – and this certainly boosts that case.

While it’s clear some effort is being made to address the need for information about mental health outcomes, it’s also clear from this report there’s a long way to go. Data about the number of people getting services, costs and the average lengths of stay say little about patients. Currently the only significant measure is the proportion of episodes of care (in patient or day care) where patients show significant improvement. What these data mostly highlight is how significant numbers of patients (about a third) fail to complete their care.

The AIHW report provides some excellent data interactives that will be useful to people who work in mental health.

Suicide prevention – trying to guess the level of commitment

As an addendum, I should note the recent announcement from the Morrison Government of $64 million for suicide prevention and other mental health initiatives. This is described as “an early response” (is that code for “kneejerk reaction” over “strategy”?) to advice from the National Suicide Prevention Advisor Christine Morgan.

The media release does not specify the period over which the $64 million is committed – one year or four years?

Social accountability of doctors and dentists

I have long been interested in the questions around the social accountability of clinicians (especially in countries like Australia where they operate as private businesses but receive significant federal funding) and the social mission of the schools that educate and train them.

This approach owes much to the wonderful Dr Fitzhugh Mullan, Professor at George Washington University, who sadly died, much too young, just recently.

In 2010 he and his colleagues examined the social mission record of American’s 141 medical schools in terms of graduating doctors who practice in primary care, work in underserved areas, and are minorities. They found wide variation among institutions. You can read a summary of their findings here. Spoiler alert – the big, prestigious, research-focussed medical schools have the lowest rankings.

Some recent conversations and emails with dental colleagues at the University of Sydney alerted me to their work, where they are looking at the social accountability of dentists and dental schools.

A study at the University of Otago in New Zealand found that final year dental students thought that there should be structural and political changes to address health inequalities, but did not see that addressing these inequalities was the responsibility of individual dentists.

Dr Alexander Holden, a dentally qualified ethicist, wrote last year about how the increasing status that is accorded to perfect teeth, and the fact that dentistry for high-income groups is reorientating from therapeutic to cosmetic, affects the social contract dental practitioners  have with the communities they work in. It might also be argued that this increasing focus on the cosmetic is a driver of dentistry’s professional status and the artificial separation of mouth and body in medicine.

If this intrigues you, here are two more papers by Holden and colleagues to read:

Embarrassing realities: The portrayal of dentistry in reality tv ‘dentertainment’

Last year, conscious that too often my The Health Wrap pontifications are about what is wrong with the health/healthcare world, I determined to end every edition with a good news story. That tradition will continue in 2020 – and I’m happy to be alerted to any such stories.

This story is a smidgeon late, but inspiring and hopeful nevertheless.

On January 16, the Coalition of Peaks released their Engagement Snapshot –  a report on Aboriginal and Torres Strait Islander community engagement on Closing the Gap and changing the way governments work.

The face-to-face meetings showed strong support for the three reform priorities developed by the Coalition of Peaks, and this was validated by the online survey findings.

Based on this consultation, the Coalition of Peaks has now proposed to governments the development of local data projects, led by Aboriginal and Torres Strait Islander communities and organisations, as a fourth reform priority.

I hear that those intimately involved in driving Closing the Gap Refresh are feeling very optimistic about the way forward. You can access more information about the consultative process here on the NACCHO website.

Croakey thanks and acknowledges Dr Lesley Russell for providing this column as a probono service to our readers. Follow her on Twitter at @LRussellWolpe.