This fortnight’s Health Wrap is compiled by Ellice Mol, the Sax Institute’s Digital Communications Manager. Enjoy the Wrap and tweet us via @SaxInstitute if you have any ideas for future issues.

During last December’s budget update, the government revealed a plan to save $650 million by abandoning bulk-billing incentive payments for items such as pathology tests and X-rays. This week, the healthcare chief executives, Peter Gregg and Colin Goldschmidt, whose businesses will be affected by the cuts, criticised the government’s plan and warned that the move would result in Australia becoming a two-tiered system of health care, the Sydney Morning Herald reported.

This week also marked the release of a report, published by the Grattan Institute, Blood Money, that showed significant savings could be found in pathology, in ways that wouldn’t affect patients’ access to the tests they need, Croakey reported. The report suggests that offering bulk-billing should be a requirement for businesses to participate in the market, rather than offering an “incentive” for pathology corporations to bulk-bill.

Stephen Duckett, Health Program Director at the Grattan Institute, in this piece published on The Conversation and Croakey, wrote that a co-payment scheme aimed at reducing demand for frivolous use of healthcare is highly contested, because consumers almost never initiate pathology services. Instead, medical professionals request the tests because they are required to make a diagnosis or track a patient’s condition.

“There are savings to be made in pathology payments and they should come from narrowing the margins of profitable corporations, not from cutting services to the ill and vulnerable,” Stephen Duckett wrote.

The Sydney Morning Herald reported that the Grattan Institute recommended improvements to the way Australians pay for pathology which would allow the government, and taxpayers, to the “share in the massive efficiency savings that the industry currently keeps to itself”.  In the same article Federal Health Minister Sussan Ley was reported to have stepped up the fight against big pathology companies, saying the Grattan Institute report was further proof of their scare campaign to protect profits.

The decision to abolish bulk-billing incentive payments must pass through the Senate and is slated for introduction from 1 July.

In Medicare-related news, lawyer and researcher Margaret Faux warned about the perils of outsourcing Medicare payments, in this piece published on Croakey, in response to the news that the Government is preparing to privatise a swath of government payments including Medicare, in a bid to drag the Commonwealth’s payment delivery systems into the digital age. She says the operation of Australia’s health funding arrangements is complex and poorly understood. Faux presents the case for the modernisation of Medicare by upgrading legacy software as a logical first step, but warns that outsourcing could lead to loss of corporate knowledge within the department.

In a bid to cut red tape, the Government has also proposed fast-tracking approval of drugs deemed safe by other jurisdictions. But as Jennifer Martin and Gillian Shenfield point out in this Croakey article “it pays no heed to population specifics — including ethnicity and comorbidity — which can have a significant effect on pharmacokinetics and pharmacodynamics.”

After a notable absence from the recent Closing the Gap report, nutrition is now being recognised as an integral part of closing the gap on Indigenous disadvantage, according to an article published on Croakey and The Conversation. Authors Professor Amanda Lee and Nicole Turner called for urgent evidence-based nutrition programs in urban, rural and remote locations, outlining what strategies work and those that don’t.

Meanwhile, SBS published an AAP report quoting AMA President Professor Brian Owler who said last week’s Closing the Gap report indicated there was still a lot of work to do, and that the policy lacked focus on health.

“The focus has often been on education, employment and training, but I think we need to get back to seeing health as the foundation that underpins all those things; unless we improve the health outcomes those issues will remain,” Professor Owler told AAP.

In positive news, Bronwyn Fredricks wrote for Croakey on the significant gains in the targets for higher education for Aboriginal and Torres Strait Islander people, highlighted in the Closing the Gap report. She co-authored a new report published by the National Centre for Student Equity in Higher Education (NCSEHE) that found access and bridging programs are important in raising education aspirations among Indigenous students. She says the measures of Indigenous success can help to inspire future generations of Indigenous health professionals, the Indigenous health workforce and the Australian health workforce.

And award-winning journalist Stan Grant has addressed the National Press Club this week with a passionate speech about the injustices suffered by his Indigenous ancestors, news.com.au reported. He implored leaders to learn from the policy mistakes of the past.

AMA President Professor Brian Owler also delivered a strong message about the Australian government’s treatment of asylum seekers in his speech to an AMA forum on the health of asylum seekers. He told the forum that the Australian Department of Immigration and Border Protection is “pulling apart the moral fabric of the country” and prolonged detention is “state-sanctioned child abuse”, The Guardian reported.

Amy Coopes wrote for Croakey about the issues raised at the AMA forum and detailed of some of the abuse witnessed by various medical professionals as they shared bleak stories of life for children in Australian detention facilities onshore and offshore.

Professor Owler dismissed renewed calls for a boycott of medical professional’s involvement at detention facilities but called for the immediate release of all children in detention both in Australia and overseas, as well as the reinstatement of an independent advisory body of clinicians on asylum-seeker health.

Meanwhile the Immigration Minister Peter Dutton told the Today show that baby Asha, the asylum-seeker baby whose case sparked a week of protests outside a Brisbane hospital, would remain in community detention in Australia and would not be sent to detention on Nauru after being released from hospital, news.com.au reported.

Meanwhile Jennifer Doggett has reported for Croakey on the human cost of the war in Syria, with hundreds of thousands killed and 10 million people displaced,  around four million of whom are now refugees. A new report by Medecins Sans Frontieres (MSF) shows in that in 2015, MSF-supported facilities recorded 7,009 dead and 154,647 wounded in the conflict, with 30-40% being women and children. This report is speculated to document only 70% of the total numbers of war-wounded and war-dead in besieged areas. In a media-briefing last week, MSF International President Joanne Liu called for the attacks on civilians and hospitals to stop immediately.

Croakey reported on the Australia’s National Research Organisation for Women’s Safety (ANROWS) inaugural research conference,  where the issue of how knowledge and research into violence against women and children can be translated into practice and policy was discussed. ANROWS CEO Heather Nancarrow is urging better sharing of information between sectors, and says further research is needed to fill evidence gaps. ANROWS has been commissioned by the Federal Government to analyse existing national data collections relevant to violence against women, identify gaps related to women with disability, women from culturally and linguistically diverse backgrounds and Aboriginal and Torres Strait Islander women, and make recommendations on improving data collection in future to support future analysis of diverse needs.

Journalist and researcher Annie Blatchford penned this wrap of day one of the ANROWS conference for Croakey, which featured Walkley award winning journalist Sarah Ferguson facilitating a discussion by former Queensland Premier Anna Bligh, Women’s Health Victoria Board Director Candy Broad, Former Sex Discrimination Commissioner Elizabeth Broderick and former NSW Liberal leader Kerry Chikarovski on how to make sure that violence against women and children stays in the spotlight after so many decades of invisibility.

As the Federal Government announced a controversial review of the Safe Schools program aimed at promoting acceptance of gay, lesbian, bisexual and transgender (LGBTI) students, the conference also provided a timely alert on the level of violence and abuse experienced by gay and transgender girls and women, as Croakey reported. Croakey’s ANROWS cover also reported on a high-level panel of Aboriginal women discussing Indigenous understanding of and solutions for family violence, which highlighted recent research reviewing Indigenous viewpoints on ‘what works’.

A new paper by the Western Sydney University’s Centre for Health Research found treating people in their homes is a safer and cheaper alternative to hospital care that could lead to tens of millions of dollars in savings, ABC News reported.

In other research news, Coca-Cola is funding research that focuses on the role of exercise in obesity, pulling the focus away from discussions around diet as a contributing factor, Fairfax reported. Coca-Cola disclosed it had given $US21.8 million to fund research in the United States, but no such disclosures have been made regarding the company’s research funding in Australia. Health advocates believe the funding revelations could embarrass health organisations here, if and when they come. Croakey unpacked Coke’s health funding fizz here.

Science communication in the spotlight

ABC’s flagship science program, Catalyst, and reporter, Maryanne Demasi are under attack once again for airing a program suggesting Wi-Fi networks and mobile phone use may be associated with brain cancer, The Guardian reported. Science and health experts including Emeritus Professor of Public Health Simon Chapman have said the program is misleading and ignores the full range of evidence about brain cancers. The ABC’s Media Watch was contacted by many viewers who thought Demasi’s science reporting was not good enough. Demasi responded to questions from Media Watch with an eight-page statement claiming her program was adequately balanced, and responded to questions about her witness tally (six for and one against) with the comment: “you cannot divide this argument into sides.” One of her expert witnesses on the program, Professor Bruce Armstrong, a leading cancer researcher from the University of Sydney, told The Guardian parts of the program were “scaremongering”.

“We don’t have any evidence that the use of Wi-Fi causes brain tumours, or any other tumour,” he said. 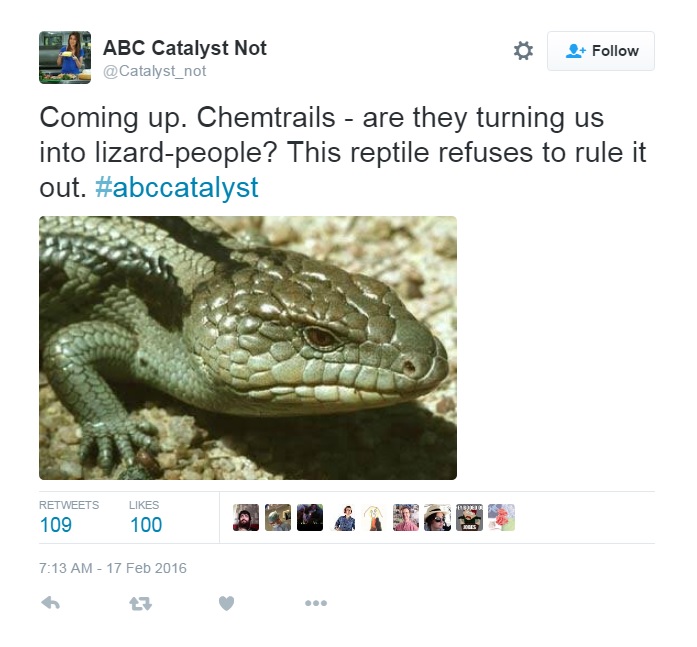 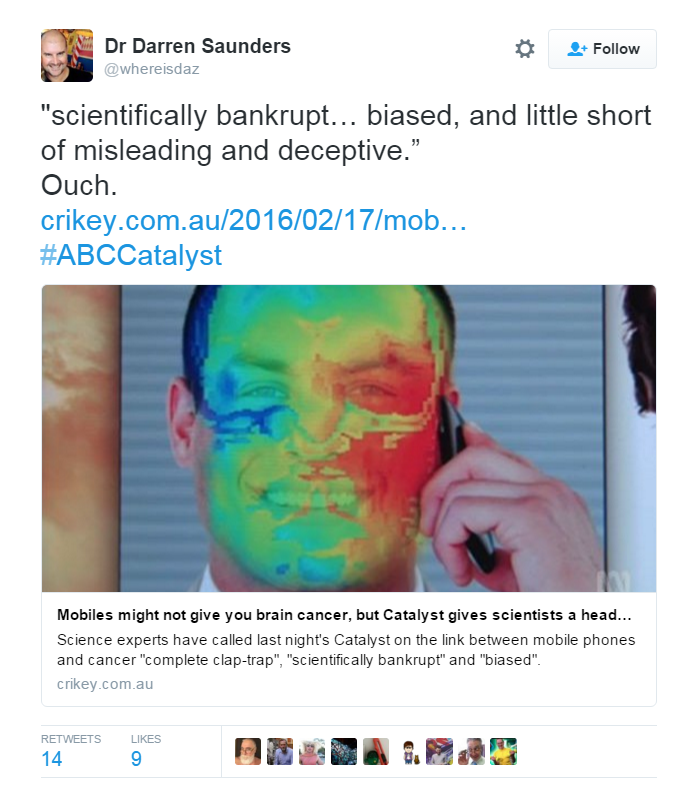 In a win for science communication, M*A*S*H star Alan Alda has partnered with the Australian National University in Canberra to boost public awareness of science, ABC news reports. Alda told 666 ABC Canberra the centre was providing training in improvisational acting.

“I experimented with a group of engineering students, and within a few hours I saw an improvement in the way they related to an audience,” he said.

Alan Alda is the head of the Alan Alda Centre for Communicating Science and has had a long association with science communication, hosting the documentary series Scientific American Frontiers for more than a decade.

PrevPrevious“I am here. I am the solution”: Time to listen to Indigenous solutions to violence against women
Next1 child killed every 2 weeks by family member: time to free children’s lives from violenceNext