The Health Wrap: Budget speculation heightens; the screening debate; drugs, in all their forms; revolutionising healthcare 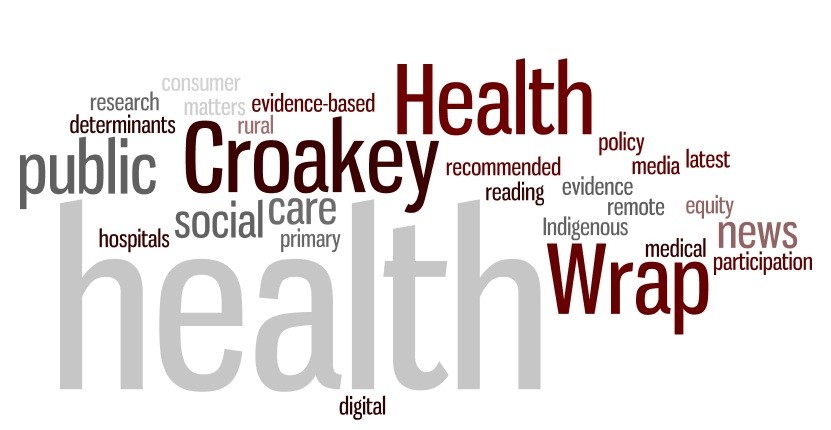 Speculation in the lead-up to Federal Budget, due to be released on 13 May, has gathered pace in the past two weeks. And with the Commission of Audit just released, we are now closer to knowing what the Government might have in store for health.

The Conversation gives a good overview of some of the proposed saving mechanisms, including the introduction of a $15 co-payment on all Medicare-funded services, and Croakey’s assessment from a health perspective can be found here. The Sydney Morning Herald also takes a look at the Commission’s health recommendations and Ian Verrender provides a thoughtful analysis from an economic perspective on The Drum.

The Australian Health Care Reform Alliance put the case against co-payments in a recent statement, citing the importance of a fair and equitable health system.

And a Fairfax media analysis found the burden of paying for visits to bulk-billing doctors would fall most heavily on Sydney’s poorest residents, who could pay up to $30 million more a year than those in the city’s wealthiest areas.

Professor Stephen Duckett, Director at the Grattan Institute, wrote for The Conversation that the co-payment would result in savings now, but increased costs in the future. He suggested several other ways to make savings – such as by decreasing waste and strengthening preventive care measures.

On the ABC’s AM program, Sophie Scott spoke with health economist Professor Philip Clarke about how to save health dollars without weakening our primary care system. Professor Clarke, who also wrote this article on The Conversation, said changing the pricing structure of drugs in the Pharmaceutical Benefits Scheme could save the Government and taxpayers millions.

GP super clinics are also under the microscope, with the Coalition labelling them “a total waste of money” according to this Croakey/Conversation article. Deputy Director of the Menzies Centre for Health Policy Jim Gillespie writes that while there have been problems, there have also been success stories. But there has been no proper evaluation of the program’s outcomes, he says, making it difficult judge their progress.

The spectre hanging over government agencies such as the Australian National Preventive Health Agency is looming larger, with the Commission of Audit recommendation that it be cut and its research budget be awarded to a single National Health and Medical Research Institute, combining the National Health and Medical Research Council and Cancer Australia. Such news has done little to allay concerns over whether Medicare Locals (MLs) will suffer a similar fate.

Croakey’s Marie McInerney collated some reading and reactions following reports that ML chiefs had been told big cuts were coming,– including the view that abolishing Medicare Locals would “reverse the gains they have already made in primary healthcare and ultimately result in a less equitable and efficient healthcare system.”

Strong primary care and the essential role it plays in health system performance was also in focus at a recent Sydney policy roundtable with Dr Hernan Montenegro, an expert on health systems from the World Health Organization. The roundtable of key health players was hosted by HARC – the Hospital Alliance for Research Collaboration – made up of the Agency for Clinical Innovation, Clinical Excellence Commission, Bureau of Health Information and the Sax Institute. A video interview with Dr Montenegro is available here.

Why do we need greater investment in the Aboriginal Community Controlled health sector?

Croakey has collated some answers from the experts, including a great article from Professor Ian Ring, a statement from the AMA, and an interview with Sandy Davies, chair of the Geraldton Regional Aboriginal Medical Service.

While there is limited evidence available, it does indicate Aboriginal Community Controlled Health Organisations run by and for Aboriginal people perform better than mainsteam general practice in caring for Aboriginal and Torres Strait Islander patients.

However, Warren Mundine, head of the Prime Minister’s Indigenous Advisory Council, has warned his fellow councillors to be prepared to be “among the most hated people in Australia” when the Budget is announced, as he expects cuts to Indigenous funding.

But there are a lot of great ideas being talked about. Thursday 1 May saw people head to Twitter for an international day of action – and listening – for Aboriginal and Torres Strait Islander health. Look for the hashtag #IHMayDay to see some of the conversations that took place. You can read the Twitter transcript here.

How we effectively communicate messages about health, science and research is a question that resonates in an era when rejecting evidence has gained a certain level of political acceptability.

This Croakey post examines some new communications aiming to reframe the climate change debate. In the article, health and communications experts shared their views on whether a satirical video could make a difference – or simply entertain people already convinced.

Croakey also reported on presentations given at the 5th National Public Sector Communications Officers’ Conference, including one from Associate Professor Kerry McCallum on a project that looked at how the media influences Indigenous policy.

But as Croakey readers know, communicating on health matters isn’t straightforward. This article in the New Republic examines the portrayal of mental health in popular TV shows, and explains why treating mental illness as a superpower – as in Homeland, House or Bones – can be just as harmful as more overt stigmatisation.

One of Australia’s best-known medical communicators, Emeritus Professor Stephen Leeder, has been recognised by a special event put on by the University of Sydney. Croakey celebrated by sharing some of his most recent writings.

The complexity of screening messages

Among the changes it recommends are testing every five years instead of two, replacing the pap smear with a new test to detect human papilloma virus (HPV), and screening to start at 25 instead of 18.

But increased screening intervals can be a hard sell to patients – another example of the difficulties of communicating evidence. In this Courier Mail article, a Queensland woman worries about those who, like her, were diagnosed with ovarian cancer before their 25th birthday, and in this article from The Age, a prostate cancer survivor argues that an imperfect prostate test is better than none.

And in a tribute to Chrissy Amplett of the Divinyls, who recently died from breast cancer, a worldwide campaign has seen her song “I touch myself” re-recorded and used as an anthem to encourage women to undertake regular breast checks.

Drugs, in all their forms

Australia has been warned by the Australian Crime Commission its methamphetamine problem is reaching pandemic proportions – with overdose deaths from ice now second only to heroin – and in an interview with 3AW, Prime Minister Tony Abbott said that the ‘war on drugs’ was looking unwinnable.

A further clamp-down on tobacco looks likely, with mandatory licences and other tough restrictions facing tobacco retailers now the State Government has convened a taskforce to examine how the drug should be sold in NSW, writes Amy Corderoy in the SMH.

In news that has alarmed health experts, a company in the US wants to sell powdered alcohol. University of Sydney lecturer Nial Wheate writes on The Conversation this is a health risk we don’t need.

The Australian National Preventive Health agency (ANPHA) has recommended against setting a minimum price for alcohol, saying it would lead to bigger profits to alcohol retailers instead of helping the Government tackle alcohol-related harms via revenue-raising measures like alcohol and tobacco taxation.

And in this Croakey article, anonymous health policy analyst ‘William Foggin’ took on Terry Barnes to explain why this alcohol and tobacco taxation is very different proposition to a GP co-payment.

Technology has long been hailed as the key to major change in the way we manage our health systems.

Another article in The Conversation examined how games can be used for many health and social applications, and potentially help us solve tricky health problems.

And The Australian reported (paywalled, sorry!) on our first “fully integrated digital hospital”. To be based in Queensland, it looks set to offer patient tracking, machine-based record keeping, and electronic food ordering and medicine dispensing, aiming to “revolutionise healthcare”.

This grim Croakey article from Professor Caroline de Costa at James Cook University examines the risks to pregnant women, newborn babies and new mothers from being held in detention at one of Australia’s offshore processing centres on Nauru.

In further distressing news for global health, a recent report from the World Health Organization (WHO) provides the most comprehensive picture of antibiotic resistance yet, and reveals it is no longer just a future risk.

“Without urgent, coordinated action by many stakeholders, the world is headed for a post-antibiotic era, in which common infections and minor injuries which have been treatable for decades can once again kill,” Dr Keiji Fukuda, WHO’s Assistant Director-General for Health Security, said in a media release.

But in a win for health equality, the ACT Government has announced it will subsidise bariatric surgery. The Canberra Times interviewed ANU’s Professor Emily Banks about the decision, and she said it would help relieve some of the inequities associated with access to obesity surgery.

The Close the Gap Campaign Steering Committee put in a submission to the proposed changes to the Racial Discrimination Act, saying fighting racism is important for closing the health and life expectancy gap between Aboriginal and Torres Strait Islander people and other Australians.

And in this opinion piece for ABC’s The Drum, Professor Paul Griffiths turns the tables on the nanny state argument. He contends that  ‘corporate nannying’ is just as prevalent and far more worrisome as government regulation.  Corporations, he says, are trying to influence our behaviour by making it harder to choose the healthier option, using upselling, suggestive marketing, or by charging a little bit extra for a lot more stuff.

If you see news that you are keen to have covered in this fortnightly column, contact me on Twitter via @francesgilham, my colleague Kellie Bisset via @medicalmedia, or use the hashtag #healthwrap.

PrevPreviousMore strong verdicts on the Audit Commission’s “cruel, unfair, ignorant” proposals on health
NextVerdict on the National Commission of Audit: it lost the plot on healthNext