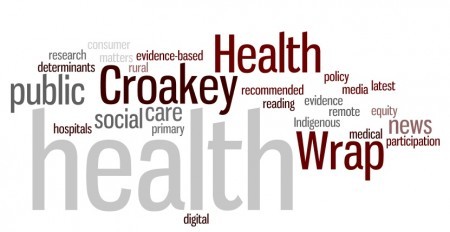 The boundaries for the new Primary Health Networks have been announced – slimmed-down networks proposed by the Coalition in this year’s Budget to replace Medicare Locals.

Medical Observer reported the federal government saying it was committed to having the Primary Health Networks up and running by 1 July 2015, and pledging a more efficient, GP-centric system that directs funding to front-line services.

Croakey also covered the news, as well as the Australian Medical Association (AMA) offer to “assist consortia pitching to become PHNs (so long as they are committed to working collaboratively with the AMA) – for the tidy fee of $10,000.”

In Texas, Thomas Eric Duncan, the first person to be diagnosed with Ebola in the US, succumbed to the Ebola virus, The Atlantic reported.

Politico reported on the sad story, saying it showed how communication glitches – all too common in hospitals – can result in severe outcomes for patients.

A nurse who treated Mr Duncan was diagnosed with having contracted the disease, stoking fears in health workers, and news then broke of a second nurse who had been infected.

Meanwhile, former Independent MP Rob Oakeshott wrote a letter to Thomas Eric Duncan, thanking him for forcing the “advanced” countries to finally acknowledge the scale of the crisis.

Some articles published this past month painted grim pictures of life on the Ebola front lines in Sierra Leone and Liberia – including this one on the difficulty of caring for patients when you’re dressed like an alien, and another describing the daily rhythms of a clinic in detail.

But Frank Bruni, writing for The New York Times, said perhaps we should be more scared about a virus that kills many more Americans than Ebola every year: influenza.

The PLOS blog Public Health Perspectives posted an interesting piece examining the balance of fear and apathy in the case of Ebola: just how afraid should we be?

In Australia, pressure has mounted for the Australian Government to do more in its response to the crisis, Croakey reported – and the site also published a call-out to the nation’s cartoonists in an effort to mobilise the Government into more action.

As part of Croakey’s coverage of the CRANAplus conference, the presentations by two Australian nurses recently returned from deployments to West Africa provided some powerful first-hand evidence of the toll on healthworkers.

Mental Health Week ran from 5-12 October, and the ABC held a special programming event, ‘Mental As’, to coincide with the dates.

The event, described as “the biggest ever cross-platform programming event conducted by the ABC”, involved a range of content across TV, radio, online and mobile featuring personalities from Australia’s major TV networks “to help kick-start a national conversation about mental health”.

A major focus was the use of comedy to explore the issue, as this Conversation article reported.

But in an opinion piece for the Courier Mail, Dr Rachael Sharman from the University of the Sunshine Coast worried that mental health might be becoming a fad, or something to be celebrated, in adolescents; writing that the programming by the ABC seemed to paint a picture of mental illness as a normal, temporary blip on the radar of successful individuals. She said there was no coverage of those with darker stories chronicling a lifelong, debilitating battle.

As part of the event, Q&A ran a special episode focusing on mental health in rural and remote Australia. Gordon Gregory, Executive Director of the National Rural Health Alliance, reflected on the episode for Croakey, saying the episode recognised “the failure of the states to invest appropriately in community mental health”.

And also on Croakey, Dr Samantha Battams, Associate Professor & Public Health Program Director at Torrens University in South Australia, discussed how governments, health professionals and other mental health stakeholders can work together to improve community-based care for people with mental illnesses to reduce the need for hospitalisation.

Australian GPs have launched a ‘No advertising please’ campaign, vowing to avoid drug reps and The Conversation published an article by GP Brett Montgomery who is supporting the campaign.

“I don’t think drug reps are evil people; in fact, many of them are pleasant people who are no doubt doing their job well. But the purpose of that job is to increase medication sales. My responsibility is to prescribe medicines in a manner optimal for the health of my patients. These two purposes may conflict. Doctors need impartial, evidence-based information on medications. We should not confuse education for marketing,” he wrote.

Also on Croakey, Consumers Health Forum of Australia CEO Adam Stankevicius suggested it was “reasonable and rational” for patients to ask doctors about their views on pharmaceutical marketing.

But pharmaceutical reps are only one part of the prescribing equation. This article on the KevinMD blog argued that pay-for-performance schemes can lead to overdiagnosis and overtreatment, using the example of antibiotic prescribing.

And Business Insider Australia argued that our inability to accept that mistakes inevitably happen has led to a culture of medical overdiagnosis and overtreatment in the western world, citing a recent study from the UK.

Standing up for public health

Grass roots campaigns could also be useful when it comes to tackling the food industry and regulation issues.

Jane Martin, Executive Manager of the Obesity Policy Coalition, wrote an article for The Conversation calling for community-based approaches to changing our ‘obesogenic’ environment.

And John Menadue’s blog Pearls and Irritations ran a two part series examining the Government’s cost-cutting in areas of prevention. The article said cuts affected the more difficult and contentious health promotion tasks – such as regulatory policy for alcohol and tobacco and food, which requires examining industry behaviours like advertising of junk foods, salt levels used in processed food, and alcohol promotions.

Budgetary threats are also concerning public health experts in Tasmania, with this article on Croakey asking some tough questions of the Tasmanian Government on cuts to its Population Health department.

Another Croakey article focused on public health advocacy and included tips on how to advocate for public health effectively and have your voice heard.

Health news for the young and old

Experts have queried the utility of the existing Healthy Kids Check ahead of the controversial planned expansion of the program, according to a segment in the Health Report.

In this interview, Dr Rae Thomas said, “Social emotional development of children is extremely fluid, and so I think we need to be very cautious about the next step that is suggested for the Healthy Kids Check.”

In good news, children and young people in NSW are the healthiest they have been in decades, according to an analysis of a new report in a Sydney Morning Herald article. Healthy eating, vaccination and physical activity levels have all increased, and obesity and excess weight may be on the way down, the article said.

And a report from VicHealth has examined how parental fear shapes children’s independence and physical activity. “We know there are numerous factors that influence parents’ decisions to let their child play and travel independently — from traffic concerns to parents’ work demands, childcare arrangements and external perceptions.

“But we also know children who are able to play and travel without an adult and those who walk or ride to school are more likely to meet Australian physical activity guidelines,“ VicHealth CEO Jerril Rechter wrote.

On the other end of the age spectrum, attendees at a dementia conference in Canberra were told by British expert Steve Milton that Australia, with its weather, way of life and friendly people, was at a unique advantage to develop dementia-friendly communities.

And an article in the Australian Financial Review explored the ‘silver lining’ to an ageing population; saying that an ageing population in Germany was resulting in people staying healthy for longer and working longer, leading to greater productivity.

Marie McInerney wrote about the power of storytelling for Aboriginal and Torres Strait Islander children, the success of the Inala Community Health Centre incorporating research into its work, why Indigenous health professionals should combine their Indigenous traditional knowledge and their knowledge of western science, and the stories of three Indigenous doctors and their journeys into medicine.

Full coverage of the conference can be read here.

In the wake of budget uncertainty, it is critical to maintain momentum in efforts to reduce smoking among Aboriginal and Torres Strait Islander peoples, according to Associate Professor David Thomas, head of tobacco control research at the Menzies School of Health Research in Darwin, who wrote this impassioned article for Croakey.

The blog also covered a new art exhibition asking some tough questions about privilege, power and kidney disease, and the latest article for The Koori Woman column; which explored her struggle with bipolar disorder and the strength she has gained from knowledge of and pride in her heritage.

PrevPreviousLaughter yoga and Zumba – helping people with chronic kidney disease
NextI Heart My People: some stories from behind the scenesNext