The Health Wrap: misinformation, pregnancy and birth, disability, access to healthcare, and the importance of leeches

In this latest edition of The Health Wrap, Associate Professor Lesley Russell explores coronavirus misinformation, conspiracy theories and falsehoods, the impact of the coronavirus pandemic on pregnancy and birth, the critical work of the Royal Commission into Violence, Abuse, Neglect and Exploitation of People with Disability, interesting new insights on access to healthcare in New South Wales, and the importance of leeches to medicine.

A study just out from researchers at Cornell University, which comprehensively examined coronavirus misinformation, conspiracy theories and falsehoods in traditional and online media found one common thread: President Donald Trump!

The researchers analysed 38 million articles about the pandemic in English-language media around the world. Trump was mentioned in nearly 38 percent of the overall “misinformation conversation,” making him the largest driver of the “infodemic”.

Small wonder then, given the ramifications of these actions in the US and internationally – and all the other anti-science, anti-evidence actions of Trump – that some major international medical and science journals have taken the unusual step of editorialising against Trump’s re-election. Dr Amy Coopes wrote about this in an article for Croakey this past week.

Immunologist and UNSW Emeritus Professor of Medicine John Dwyer, in an article published in Pearls and Irritations, had the best advice: when it comes to COVID-19, don’t listen to Donald Trump or Alan Jones. 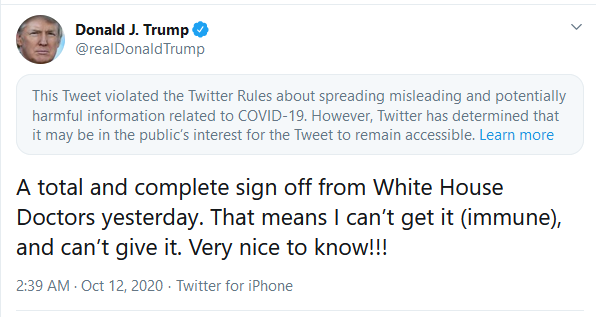 One important reason to worry about coronavirus misinformation is that it will be important, once vaccines are approved as safe and effective, to get people immunised. There is already so much mistrust around this, not helped by people like Trump.

This past week on the Health Report on ABC radio, Dr Norman Swan talked about an Australian study that looked at 53,000 US-based Twitter users to see what role bots play in disseminating misleading messages about vaccines. It turns out the answer is – not much.

They found that people on Twitter see lots of information about vaccines. A typical user from the United States would have seen around 750 tweets about vaccination in the three years from 2017 to 2019, but just 27 of those tweets would have been vaccine critical, and none of them would have come from bots.

The New York Times recently ran a story about Heidi Larson, the founder of the Vaccine Confidence Project (based in London), which acts to build trust and address vaccine hesitancy. She has come to see most anti-vaxxers — a term she considers too oppositional — not as uneducated, science-denying individualists but as people with genuine questions and doubts in search of guidance. “This is a public cry to say, ‘Is anyone listening?’” she writes in her recently released book “Stuck: How vaccine rumors start and why they don’t go away.”

Australia has its own version of Heidi Larson in Professor Julie Leask from the University of Sydney. You can read her August article for Croakey on the importance of credible, timely communications around coronavirus vaccines here.

In 2019 Leask and Maryke Steffens wrote “4 ways to talk to vaccine sceptics” for The Conversation, available here.

A tweet this week from Leask alerted me to the revision of the 2011 version of The Debunking Handbook, with over 20 co-authors, which reflects a scientific consensus on how to combat misinformation.  The Debunking Handbook 2020 was created by an innovative process that involved a series of predefined steps, all of which are  documented and publicly available. 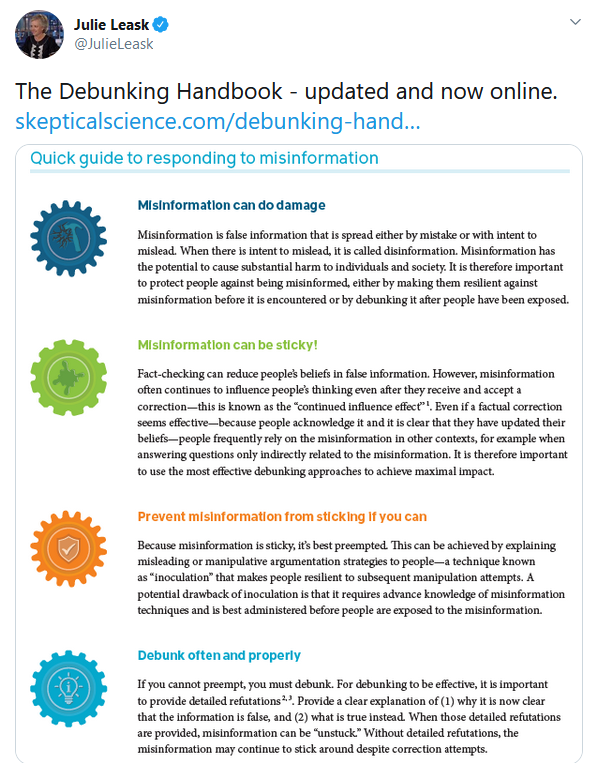 Pregnancy and birth during the pandemic

Recent studies in Ireland and Denmark have shown that preterm births decreased in the northern hemisphere Spring during coronavirus lockdowns. Anecdotally, doctors around the world reported similar drops. They speculated that reduced stress on mothers, cleaner air or better hygiene might be contributing factors.

Now a large study from the Netherlands, published in Lancet Public Health, has yielded even stronger evidence of an association between the lockdowns and a smaller number of early births (a reduction from 23 percent of all births to 15 percent).

In the best-case scenario, the missing premature babies were born as healthy full-term infants, but they might also have been stillborn.  The methodology used did not allow the measurement of stillborn cases, but no great change has been reported.

What happens if the mother is infected?

Initial studies in the United Kingdom and Korea have found that coronavirus-positive mothers generally have good outcomes and do not transmit the virus to their babies. In the US (which has shockingly high rates of maternal mortality for a developed country) CDC data show COVID-19- associated pregnancy loss and maternal mortality.

Data from a large hospital in India shows that the rates of premature birth and the number of babies who died in the intensive care unit were similar for infants of infected and noninfected mothers. Less than 10 percent of the babies tested positive for the virus a few days after they were born, but it is not clear if they contracted the virus in utero or from contact with their mothers after birth.

An international consortium of nearly 40 nations is exploring how coronavirus is linked pre-term birth and perinatal outcomes.

I fear that the important work of this Royal Commission, which was established in April 2019 and will continue through until April 2022, is somewhat lost in ongoing concerns about coronavirus and the uproar about aged care.

This past week saw hearings in Brisbane on “Barriers to accessing a safe, quality and inclusive school education and life course impacts”.  You can access hearings transcripts here.

The Royal Commission has released two progress reports. The first (December 2019) is available here; the second (August 2020) is here. An interim report is due 30 October 2020. With the final report not due until April 2022, there will likely be other progress and/or interim reports.

The stories conveyed so vividly in the submissions and testimonies to the Royal Commission indicate that we should expect this month’s interim report to be a powerful and dramatic document. The key question: will it generate the needed responses from the Morrison Government?

Violence against people with disabilities

I was provoked into writing this piece because I saw reference on Twitter to some recent work from Professor Anne Kavanaugh at the Centre of Research Excellence in Disability and Health at the University of Melbourne’s School Of Population And Global Health and Jen Hargrave who is at Women With Disabilities Victoria.

They have produced some new research for the Royal Commission, using data from the Australian Bureau of Statistics Personal Safety Survey done in 2016, on violence against people with disabilities. You can access the fact sheets here.

Here are some key facts from their work:

This work is so timely as the Royal Commission heard about the bullying experienced by young Aboriginal boy Quayden Bayles at school.

At the same time – and analogous to reports from the aged care sector –  the disability watchdog, the NDIS Quality and Safeguards Commission, has come under fire for failing to act on accounts of abuse against people receiving assistance from the NDIS.

In the two years to the end of June 2020, the Commission received more than 1000 complaints related to abuse or neglect but has issued just one fine and banned only one provider and 22 individuals, with no further action taken in 47 percent of cases.

There was a great report out this past week: “Mapping Patient Experience and Economic Disadvantage in NSW” from the New South Wales Council of Social Service (NCOSS) and the National Centre For Social And Economic Modelling (NATSEM).

It uses data from the pre-coronavirus era (ABS data from 2018-19) but has some key points for current times and into a post-coronavirus future. 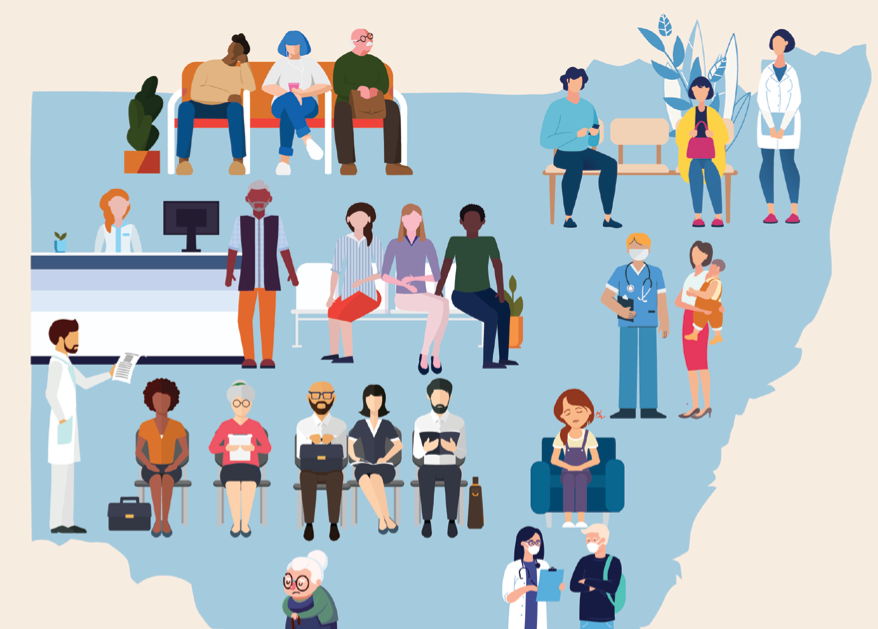 As the forward states:

“This report uncovers trends that confirm and contradict commonly held views on poverty and health, revealing a need for policy makers, health and social service providers to continue developing a deeper understanding of the nature, diversity and complexity of patient experience.”

On one level, the report tells us what we already know:

But the real value of this report lies in some deeper and more granular analyses.

For example, the report shows that having a low income — as opposed to being unemployed — tends to result in a significantly better patient experience of healthcare services. Some of this might be because many people on low incomes are pensioners and older Australians tend to be more satisfied with the time GPs spend with them.

Interestingly, the report does not explore the possible impact of low self-esteem here. But clearly, as so many people have lost and are losing their jobs at this time, this is an issue that needs attention.

Because the report maps data by the ABS Statistical Area 2, it is able to show issues with access and experience that do not normally show up. For example, there are pockets in even the wealthiest suburbs of Sydney where people are going without needed healthcare – something that is generally hidden in broader analyses — and locations that are close by or share similarities can have vastly different experiences.

The report argues that the current extraordinary circumstances of the pandemic “present an opportunity to ensure that we don’t further entrench and widen health inequality” and highlights how sophisticated targeting is needed to address these inequalities.

And – while the topic of out-of-pocket costs is on the table – how disappointing to see the government waste another $17 million on its medical costs finder website. It has attracted derision from all the stakeholders and done nothing to lesson patients’ costs.

The best of Croakey

Thanks to Croakey’s team and contributors for comprehensive coverage of the 2020-21 Federal Budget, handed down on 8 October, including key points and analysis and responses from multiple health, social, justice and Aboriginal and Torres Strait Islander organisations.

You can read it all via this link: 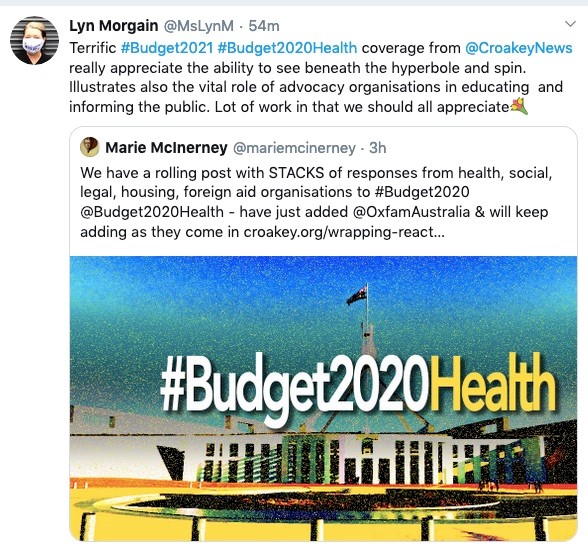 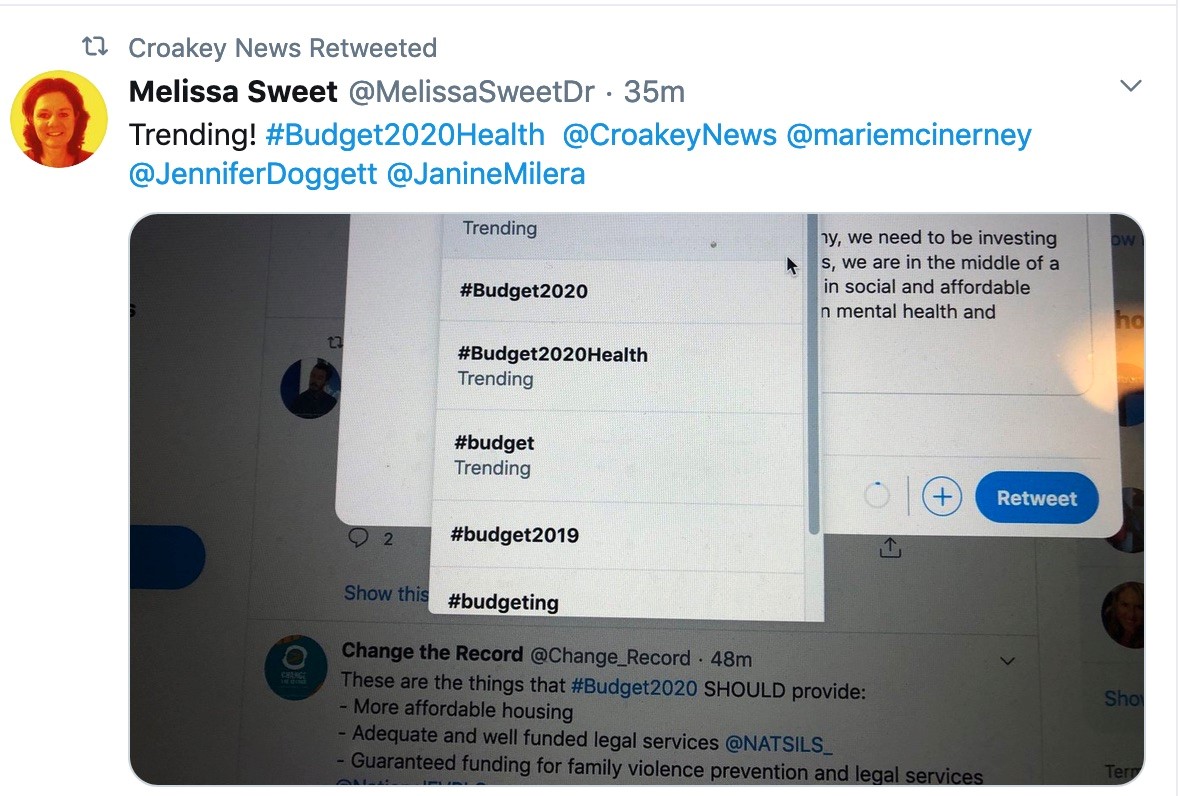 The Sydney Morning Herald recently published a great story about how important leeches are in medicine.

Just as interesting was the back story about how the leeches used in hospitals across the country – a species called Richardsonianus  — are bred in a backyard enterprise in Echuca. 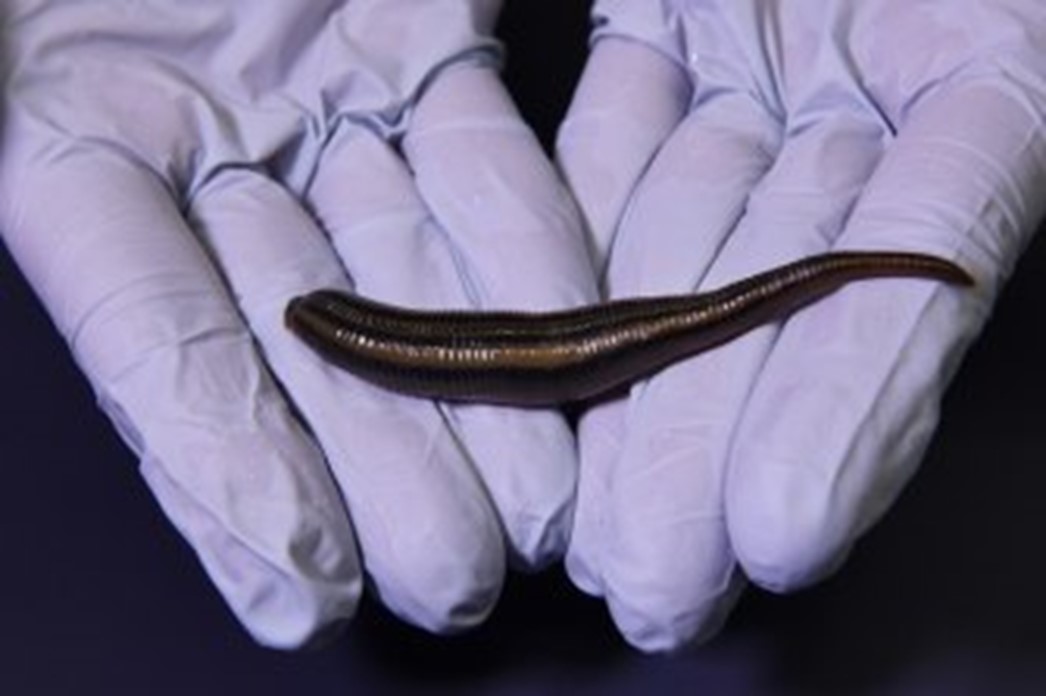 And finally – congratulations to Nigel Harding, stepping down after four years of writing some 300 Healthcare in Brief summaries for the Australian Healthcare and Hospitals Association (AHHA). A mighty task, brilliantly executed!

Croakey thanks and acknowledges Dr Lesley Russell for providing this column as a probono service to our readers. Follow her on Twitter at @LRussellWolpe.