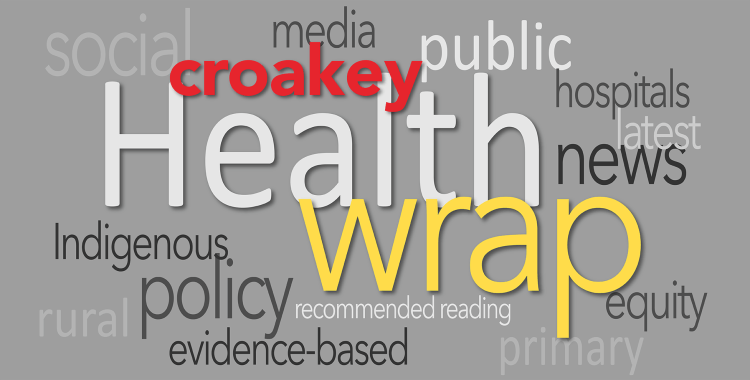 The Health Wrap: the latest news on primary care, mental health, the NDIS – and how it all links up

This week in The Health Wrap I’m picking up and elaborating on some earlier themes around integrated care, with particular reference to mental health.

If I’m a bit of a one-note Johnny on this, it’s because I think integration of health care services and then the integration of these with social care is the key to solving the wicked problems in health – of which mental health is just one.

More on reforms in primary care

In the last edition of The Health Wrap I wrote about how to turn primary care into primary health care. I’ve been thinking further about this issue.

I recently put pen to paper with some ideas about how Australia might get started down this road. You can read my article here, on the BridgeBuilders.Vision website (where there are a number of other great articles on the issues of integrated health, systems leadership, crossing organisational boundaries, and teamwork – all essential aspects of needed health care reform).

These issues were up for discussion at both the recent World Hospital Conference in Brisbane and the annual conference of the Royal Australian College of General Practitioners on the Gold Coast. There was some excellent tweeting from these conferences; look for #IHFBrisbane2018 (curated tweets from @WePublicHealth are here at 8 October) and #gp18gc.

The Productivity Commission on integrated care

A cogent case for a focus on integration is made in the Supporting Paper No 5: Integrated Care, accompanied Shifting the Dial, the five-year productivity review produced by the Productivity Commission in August 2017.

If, like me, you missed this when it came out (how did that happen?), I really recommend a read. You will likely not agree with everything, but it is an excellent analysis of the issues and provides a sensible and detailed roadmap forward, along with Australian and international examples of what works.

The paper makes the case that reforms need to be underpinned by win-win alliances and suggests a cooperative role for private health insurance. It sees strong grounds for experimentation at the PHN/LHN level (and to this end proposes the establishment of Prevention and Chronic Condition Management Funds allocated to each LHN), and the need for links into regional community services and public health initiatives.

It also makes a critical point about how the terms “integration” and “patient-centred” are used:

When someone describes some aspect of a health reform as integrated or patient‑centred, it is important to examine what this means in practice. A failure to do so makes it harder to draw the lessons from the multiple applications of these practices in Australia and globally.”

I like this paper because it delves into the archives to remind us of what we have learnt from previous initiatives. It’s frustrating to look at what has been done over the years to help drive integration – and what has been ignored.

Some of us are old enough to remember the National Coordinated Care Trials, which date from 1997 and lasted through to 2004. They didn’t deliver the desired results – but the evaluations provide good information about why.

Then for ten years, from July 2004, the Federal Government supported the Australian Primary Care Collaboratives Program, which looked at integrating care for chronic and complex patients. The APCC website can still be accessed here and the work done on how to improve care integration is available here.

It would be a shame to let this important work be forgotten and go to waste. I was therefore interested to read this article (the title alone is incentive!) Integrated care – a Nirvana we can reach for. It outlines how the APCC work was carried forward (at least in 2016) by integrated care collaboratives in Townsville/Mackay and the North Coast of NSW.

Also offered are explanations for the failure of the Diabetes Care Project to achieve cost‑effective gains (it was not a failure of integrated care, but a reflection of the problems that occur when implementation of the model is incomplete) and suggestions for improving the Health Care Homes initiative.

This is such a comprehensive paper, with so much to guide policy development and reforms – I hope (against hope) it is being used.

The Snakes and Ladders report

This recent report, aptly titled Snakes and Ladders: the journey to primary care integration, resulted from a workshop jointly hosted by the George Institute for Global Health, the Consumers Health Forum (CHF) and the University of Queensland’s MRI Centre for Health System Reform and Integration. I was a participant in this workshop and, interestingly, I don’t recall that anyone mentioned the above Productivity Commission work.

The report argues as to why political and other leaders must act to transform and reform the Australian health care system to achieve better health and wellbeing, with a priority towards strong, integrated primary care.

It uses the principles adopted by CHF to describe patient-centred care as the measure of integrated care:

The report offers priorities for implementation of integrated care around five key themes:

In particular, it calls for the establishment of a National Centre for Health Care Innovation to facilitate the ongoing testing and scale-up of new models of care and payment systems.

There is such broad agreement among stakeholders in the Australian health care system about the reforms that are needed.

The failure of the current government to capitalise on this shared vision (for example, by reworking the failing Health Care Homes initiative; facilitating the innovations in care that are blossoming at the local level; and supporting translational research in primary care) represents a painful and expensive loss of time and impetus.

The NDIS – two years on

The National Disability Insurance Scheme (NDIS) began its full rollout in July 2016. It’s an archetypal mechanism for integrating health and social needs, with the fundamental objective of giving those with a disability choice and control over their daily lives.

But from its inception there have been concerns that the NDIS was not well designed for addressing the needs of people with severe mental illness, particularly if this disability is episodic, and that many people are not able to access needed services.

Earlier this month the Minister for Social Services Paul Fletcher announced that a specific pathway will be set up under the NDIS aimed at benefiting about 64,000 people with psychosocial disabilities, including severe depression and schizophrenia. The new stream will be implemented progressively and includes:

The problems faced by people with psychosocial disabilities accessing NDIS services are highlighted in a report released earlier this year, Mind the gap: The national disability insurance scheme and psychosocial disability, which identified a significant gap between the 690,000 Australians estimated to have a severe mental illness and the 64,000 intended to be covered by the NDIS.

Concerns that many people would miss out on NDIS services provoked an announcement in the 2018-19 Budget of funding for the Community Mental Health Continuity of Support program of $109.8 million over 5 years ($91.5 million in new funding and $18.3 million from existing program funding).

This funding is meant to ensure that people who received services from the Personal Helpers and Mentors, Partners in Recovery, and Day to Day Living programs and who are ineligible for services under the NDIS, will continue to receive similar levels of support. The PHNs are responsible for commissioning and coordinating these services based on local needs.

Then in June a further $160 million was announced ($80 million from the Federal Government with matching funding from the states and territories) to go to PHNs (on a population basis) over four years.

This funding is described as being for people with severe mental illness “for whom the NDIS was not designed, but who will benefit from specialised but less intense psychosocial services, such as individual and group assistance and rehabilitation.” Note that the Commonwealth contribution to this funding was first announced in the 2017-18 Budget, so it took more than 12 months to secure the matches from the States and Territories.

While these two announcements together provide significant new funds for people with severe mental illness, they generate a range of questions:

Will these questions be answered by the evaluation of PHN lead sites on mental health reform – and where is that evaluation?

Meanwhile, many Croakey readers may be interested in this article at The Conversation by Scott Avery, Research and Policy Director at the First Peoples Disability Network (Australia). He examines the barriers faced by the estimated 60,000 Aboriginal and Torres Strait Islander people with severe disability in accessing support offered by the NDIS, and writes:

The Commission proposes that the global mental agenda should be expanded from a focus on reducing the treatment gap to improving the mental health of whole populations and reducing the global burden of mental disorders by addressing gaps in prevention and quality of care. The Commission outlines a blueprint for action to promote mental wellbeing, prevent mental health problems, and enable recovery from mental disorders.

The findings made in the executive summary from the Commission are just as applicable to Australia as they are to the least developed countries in the world. The Commission states that when it comes to mental health, all countries can be thought of as developing countries because vast inequities exist in the distribution of and access to mental health resources, not only between but also within countries.

For those who work in this area, there is nothing new here, but the issues are presented in startling clarity. The articles in this edition of The Lancet are available free of charge but it is necessary to register. I will attempt to summarise the key points.

The Commission proposes that:

The Commission sees that the burden of illness can only be reduced through prevention, early intervention, and the effective clinical and social care of people with mental disorders. This means:

Perhaps the most important aspect of the Commission’s work is that it provides a coherent rationale for including mental health within the framework of the Sustainable Development Goals:

Poverty, childhood adversity, and violence emerged as key risk factors for the onset and persistence of mental disorders that, in turn, were associated with loss of income due to poor educational attainment and reduced employment opportunities and productivity.

These complex, multidirectional pathways led to a vicious cycle of disadvantage and mental disorders and suggest a crucial role for mental disorders in the intergenerational transmission of poverty.”

Finally, in line with the over-arching theme of this edition of The Health Wrap, the Commission makes the case for the integration of mental health care into primary health platforms, and for the management of multiple morbidities via collaborative care.

News from the Emergency Department

When mental health services are lacking or unaffordable, mental health crises too often end up in the Emergency Department – or patients might be taken there because of related problems such as alcohol or substance abuse, accidents, or self-harm.

Data from the Australian Institute of Health and Welfare show that in 2016-17:

This week the Australasian College for Emergency Medicine held a summit on Mental Health in the Emergency Department. You can read Marie McInerney’s excellent reporting and the communique from the summit here and follow some great tweeting via #MHED18.

Summit participants from across the professions and sectors voted on the most important gaps affecting mental health care in Emergency Departments, and priorities for addressing the most critical issues that put patients at risk or harm.

Not surprisingly, much stronger community services and supports, a bigger focus on the social determinants of health (particularly housing), a much bigger and integrated peer workforce and a safer, calmer, more responsive (and possibly separate) environment in Emergency Departments figured strongly.