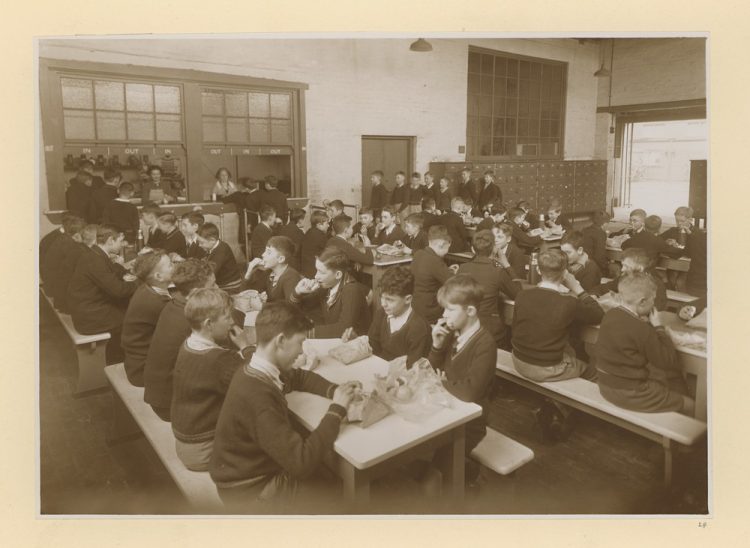 Over the past generation, Australian children have increased in weight and Australia now has one of the highest rates of child obesity in the world.  If our current pattern of weight gain continues, over two thirds of Australians will be overweight by 2025, and a third will develop type 2 diabetes during their lifetime.

This will result in an overall reduction in the health and life expectancy of our community and will place a significant additional burden on our health system.

Given the serious, long-term consequences of childhood obesity, it would seem logical that we make all efforts possible to promote healthy eating and lifestyle choices among young people.

Yet improving the nutritional value of food sold in school canteens can be a challenge, particularly when fresh and healthy foods are often more expensive than highly processed alternatives.

In the latest issue of JournalWatch, Dr Melissa Stoneham discusses some of the issues involved in restricting the availability of food with low nutritional value in canteens and argues for a joint approach to this issue from governments, schools, manufacturers and parents.

Being one of seven children, I rarely had the opportunity to buy food from my school tuckshop. I do remember looking on enviously as my friends counted their coins and then rushed to the tuckshop to purchase a sticky finger bun with pretty pink icing and coconut sprinklings. I thought I was missing out, but really I was the fortunate one, as my lunch box was brimming with fruit and a freshly made sandwich.

Times have changed. What was once seen as a special occasion “tuckshop order” has grown into multiple times a week, or for others, has become an everyday occurrence.  The role of school canteens has been identified by many researchers with both positive and negative consequences.

Some have recognised the canteen’s role as a source of information about appropriate diets for both children and parents, while others have found they can reinforce education about healthy eating provided in the school curriculum. While others have suggested that the provision of unhealthy foods in canteens leads children to believe that these products are appropriate for daily consumption.

With the introduction of the National Healthy School Canteens guidelines which involves training to help canteen managers make healthier food and drink choices for school canteens and the labelling of foods in red, amber and green categories, the food options in our school canteens should be relatively healthy. Yet even these mandatory guidelines have come into questions with some stating they are unable to cope with calls to ban sugar-sweetened drinks and fat-laden offerings.

In the near future, a new regime for foods sold in canteens will be launched. It is claimed that the new regime will require all foods sold in school canteens and health facilities to carry a new Health Star Rating, will categorise foods as “everyday” or “occasional”, will ban soft drinks and caffeinated drinks and will control portion sizes.

Unhealthy foods high in fat and sugar will be hidden from view and make up a much smaller proportion of the overall menu. Students will be encouraged to drink water instead of sugary beverages and freshly prepared foods, fruit and vegetables will be clearly in the purchasers’ line of sight.

Yet the question remains – will this work? Will students want to buy the clearly visible fruit or the healthy choice or will they still ask for the sausage roll?

In the article reviewed for JournalWatch this month, the issue of price as a key determinant of purchase choice in schools is investigated. Led by Rebecca Wyse from the University of Newcastle, and published in the Australian and New Zealand Journal of Public Health, this article aimed to describe the price of Australian school canteen foods according to their nutritional value.

In the study, 70 randomly selected NSW Government schools provided their canteen menu and student enrolment numbers. Postcodes were used to identify locations of participating schools. More than half (66%) of the schools were metropolitan based, there was an even split across socio-economic status and the average enrolment was 255 students.

Price data was extracted from the menus and another two dietitians independently classified menu item prices according to the food categories listed within School Canteen Buyers Guide 2015 which includes over 700 commonly stocked canteen menu items.

The total number of menu items assessed with price data was 5117. The findings were interesting and are presented simply in the below table, with one dollar sign representing the cheapest food option and two dollar signs representing the most expensive food option. The mean price of the foods in each traffic light category is listed, with the cumulative price for each traffic light category appearing as the last row in the table.

Breaking this down, it can be demonstrated that the majority of cheaper food options fall under amber or red categories. It is also noted that when the mean prices for each red, amber and green category are totalled, the healthy food (green) remains the most expensive option.

In 2014, an Australian study compared the average price of a meat pie and salad item from more than 200 online canteen menus and found that the mean cost of a pie was significantly lower than the cost of the healthier salad. This study tends to suggest that this is still the case. We also know that there is good evidence to suggest that increasing the cost of unhealthy foods has been associated with reduction in intakes and subsequent reduction in weight.

Yet, encouraging school canteens to fill their menus with cheaper, healthier foods options appears to be a challenge. No one is asking school canteens to sell products that are not palatable to students such as beetroot juice or mung bean cakes, but there are ways of making food healthy, tasty and relatively inexpensive.

One of the greatest challenges to supply and encourage the purchasing of healthy foods will be in lower socioeconomic areas, where there is not a lot of money to spare. Jamie Oliver found this when he admitted that his school dinner campaign had not succeeded, saying ‘eating well is still viewed as an indulgence of the middle classes.”

The solutions to stocking school canteens with fresh and healthy foods are not simple. School canteens need to follow and be recognised for following the good practice guidelines, balanced with the need to build the capacity of schools, canteen managers and suppliers to make innovative and appetising healthy options available on school canteen menus.

We need to keep reinforcing to children that healthy foods will keep them well both now and into the future and show evidence where healthy foods still make a profit for the canteen. The offering of incentives to manufacturers to create more foods that fulfil the ‘green’ criteria and are in demand by students, may also contribute to an improvement in menu items.

For those schools in lower socio economic areas, the option of government assistance to upgrade the quality of food available to students would keep costs for parents to a minimum, and reduce concern about losing much-needed funds through an initial or perceived drop in canteen sales.

The Public Health Advocacy Institute WA (PHAIWA) JournalWatch service reviews 11 key public health journals on a monthly basis, providing a précis of articles that highlight key public health and advocacy related findings, with an emphasis on findings that can be readily translated into policy or practice.