The latest in a series of articles from #AusVotesHealth Twitter festival.

Public health groups have welcomed health policy announcements from The Greens that focus on prevention and equity, and there has also been a warm response to Labor’s plan for reducing incarceration rates of Aboriginal and Torres Strait Islander people.

In other #AusVotesHealth election news, many significant health concerns are addressed in Labor’s policy on gender equality, released today.

The Greens say they would “put prevention at the heart of health”, and have pledged to introduce an Independent Preventative Health Commission to deliver evidence-based programs that tackle the rising rates of obesity, diabetes and heart disease.

“We could afford all of this, if our government stopped spending $6 billion a year on propping up the private health insurance companies who are making mega-bucks selling us services that don’t cover what we need,” their health election manifesto states.

See details of their plans for mental health, youth mental health, Denticare and universal healthcare. Other Greens policies with health ramifications include a promise to raise Newstart and the Youth Allowance, abolish the cashless welfare card and to support a fully funded and adequately staffed NDIS that is transparent, consultative and accountable.

The Australian Healthcare and Hospitals Association, the Consumers Health Forum of Australia (CHF) and the Public Health Association of Australia welcomed the policies announced by The Greens.

The CHF said their call for emphatic health reforms in prevention, funding, chronic care and dental care, present rational options to improve a health system that is currently captive to old ways. CEO Leanne Wells said in a statement:

Most health analysts would agree that many of the reforms suggested by the Greens would produce better outcomes for those Australians most likely to suffer ill-health.

Obesity and chronic illness are now among the greatest challenges that our health system needs to counter. The remedies are well within our power.

We fail ourselves through the current reluctance to confront the commercial and cultural influences that encourage obesity. We know that reorganisation of our community-based health services would prevent and treat chronic illness more effectively.

And we have the means in a prosperous nation to end the misery that many thousands of Australians experience because they can’t afford the dentist.”

The Public Health Association of Australia also welcomed The Greens’ policy announcements, and said they addressed some of the damage done when the Coalition demolished Labor’s Preventative Health Agency.

PHAA CEO Terry Slevin said there was too little focus by major political parties on preventing the enormous and long-anticipated wave of chronic disease that is hitting communities – and will continue to do so.

“The Greens recognise we must, as a nation, address the alarming rates of obesity, diabetes and heart disease; chronic illnesses that will cost us a lot in the long term,” he said. 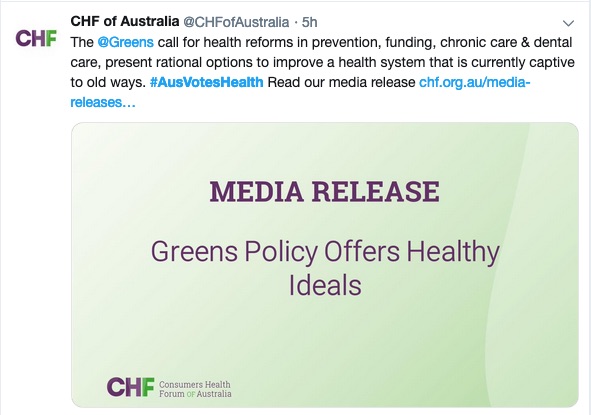 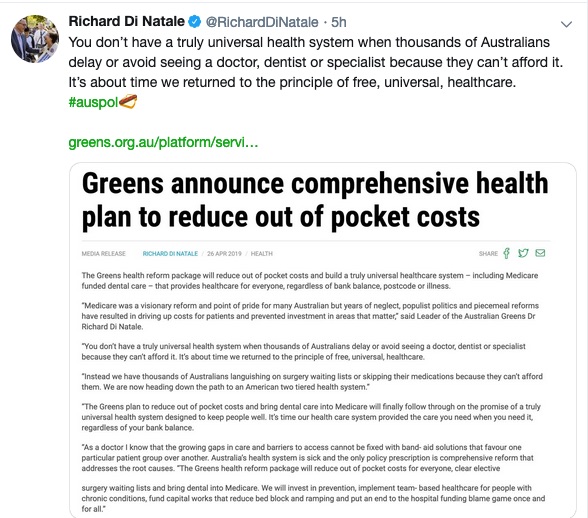 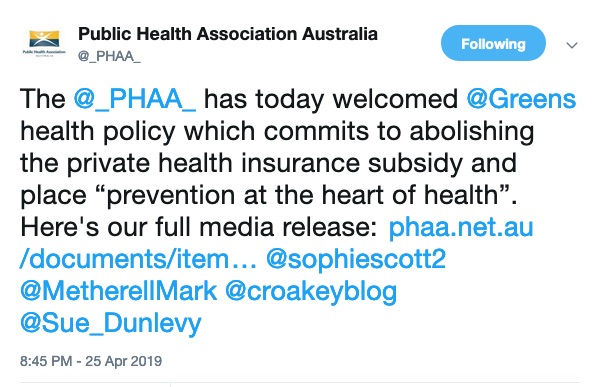 •Developing justice targets as part of the Closing the Gap framework 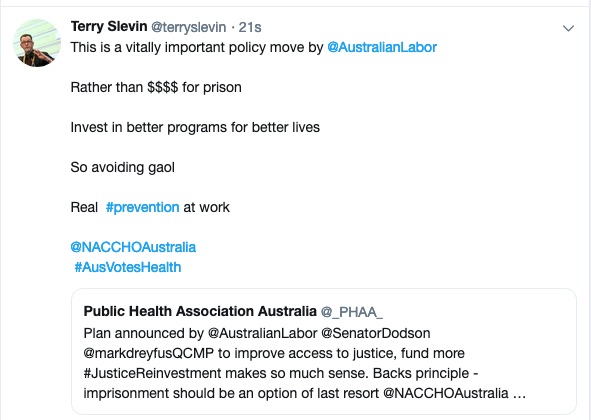 Statement by Change the Record

“Change the Record and Aboriginal and Torres Strait Islander communities have been calling for these changes for many years, and now our voices are being heard. These commitments are practical solutions and necessary first steps toward ending the over-incarceration of our people.”

“We welcome this national leadership from The Greens and Australian Labor Party on Justice Reinvestment. The Bourke community has seen real results on the ground with reductions in family violence and recidivism. We know that when Justice Reinvestment is Aboriginal-led and investment is going into strengthening community rather than building prisons, it works,” said Ms Axleby.

“National justice targets on ending over-incarceration would see accountability and real change on this injustice Australia-wide. Alongside this, the Closing the Gap framework must have national family violence, disability, child protection and housing targets – the other missing pieces.”

“Aboriginal and Torres Strait Islander women are the fastest growing prison population, and most of these women are victims of violence. Our people are the most incarcerated people in the world. We welcome this strong commitment to Family Violence Prevention Legal Services and Aboriginal and Torres Strait Islander Legal Services as critical community-controlled services needed to end these injustices,” said Ms Axleby.

In addition, The Greens announced their First Nations Youth Justice Policy, which includes many of the recommendations of Change the Record’s “Free to Be Kids: National Plan of Action”, such as avoiding detention of children on remand, making bail meaningful, ending the use of restraints, force and isolation in prison, and investing in diversion programs.

“We particularly welcome the national leadership of The Greens to raising the age of criminal responsibility to 14 years. This would have a huge impact in pulling generations of First Nations children out of the quicksand of the justice system.” 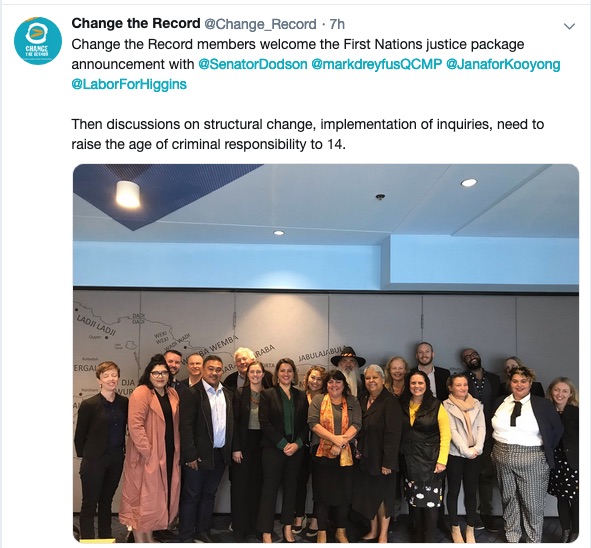 ATSILS has welcomed the funding commitments announced today by The Australian Labor Party in relation to addressing family violence and the disadvantage experienced by First Nations peoples in the justice system.

ATSILS CEO Shane Duffy said, “The $107 million justice package announced today by the ALP is a comprehensive strategy  that  balances  common  sense  with  innovation and will go a long  way  to  improving  access  to  justice  for  Aboriginal and Torres Strait Islander people should they win   Government at the upcoming federal election.”

“ATSILS have been operating under a cloud of funding uncertainty for far too long so we commend the common-sense approach announced by the ALP to maintain direct funding through the Indigenous Legal Assistance Program. This  decision demonstrates a clear belief  in  the  importance  of  self-determination and community control in the delivery of culturally safe services.”

“The announced funding boost of $40 million to ATSILS around the nation is a welcomed measure in this climate of over-incarceration  where the demand for our services regularly sees our organisation operating with exceeded  capacity. Although this funding increase is not of the scale recommended by the Productivity Commission’s – Access to Justice Arrangements Inquiry Report 2014, it is a positive step in the right direction and will help to increase the reach of our culturally safe services to many vulnerable people in regional and remote regions where ATSILS are often the only service providers.

A serious commitment to innovative justice reinvestment solutions and justice targets are key elements needed to effectively address the over- incarceration and family violence experienced by Aboriginal and Torres Strait Islander people.

We have been advocating for increased support for these measures for many years, and on the back of the undeniable success of the justice reinvestment pilot project in Bourke, it is extremely encouraging to see the ALP commit  funding for a National Justice Reinvestment  Coordinating Body and for further  trial sites throughout Queensland, Western Australia and the Northern Territory. 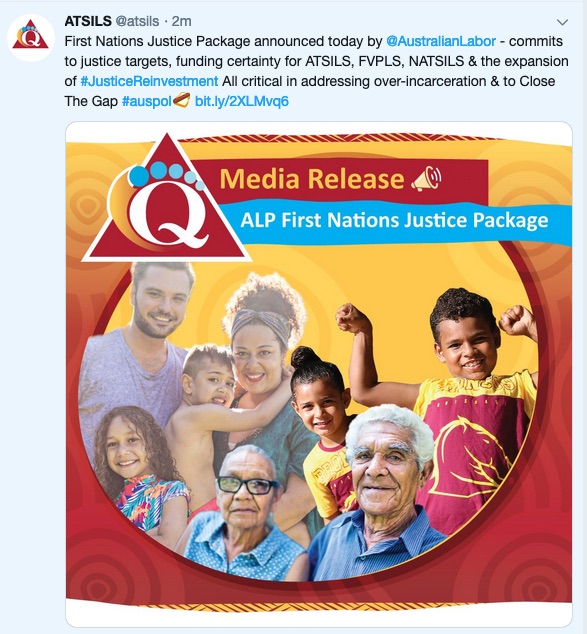 “Prevention and diversion are key to any successful program. The announcements today would be a step in the right direction towards building safe and connected communities that support Indigenous people rather than locking them up. Indigenous-led solutions are key and we welcome the establishment of a national justice reinvestment body and investment into ATSILS and justice reinvestment more broadly.

“However the ALP has missed an opportunity to address the growing problems with the youth justice system, by raising the minimum age we can lock up kids.

“It is fundamentally wrong that Australia continues to lock up children as young as 10 despite the growing evidence that it can harm them and trap them in the justice system.

“Other countries have a median minimum age of 14, which is the age recommended in the latest medical research and by the UN Committee on the Rights of the Child. Australia must stop lagging behind the rest of the world and raise the minimum age immediately.” 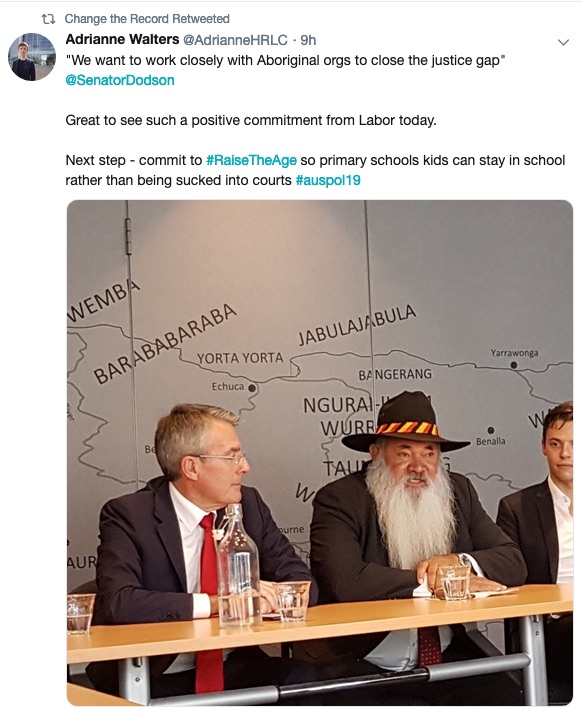 Labor has promised to:

• Deliver a National Strategy for Gender Equality; set targets for change; take measurable action to tackle inequality; and report on Australia’s progress through an annual update to Parliament.

• Strengthen the ability of the Fair Work Commission to order pay increases for workers in female dominated industries such as early childhood education, aged care, and disability services.

• Invest more than $400 million in measures to boost women’s superannuation, including paying superannuation on Commonwealth Paid Parental Leave for the first time.

• Deliver a record Commonwealth investment of more than $660 million in the Fourth Action Plan to Reduce Violence Against Women and their Children – more than doubling the Liberals’ investment.

• Invest $88 million in a Safe Housing Fund to deliver emergency and transitional housing for women and children escaping violence, older women at risk of homelessness and young people exiting out-of-home care. Set up a Safe Campus Taskforce to help tackle sexual assault and harassment on university campuses and at residential colleges.

• Deliver Australia’s first ever National Sexual and Reproductive Health Strategy to make sure all Australian women can access legal, safe and affordable reproductive health services, including terminations, in public hospitals.

• Deliver $95 million towards investments in women’s sport, including $20 million to Netball Australia to help fund grass roots participation and more than $75 million to community sporting clubs to provide change rooms and facilities for women and girls.

• Support women in trades and training by reserving half of Labor’s 100,000 fee-free TAFE places for women.

• Labor will create Australia’s first National Evaluation Framework for Girls and Women in STEM Initiatives; fund the SAGE program to drive gender equality in science and research; and establish a National Women in Science Day.

• Invest an extra $19.5 million in programs to provide intensive in-school mentoring for thousands of First Nations girls and young women.

• Reform the Australian Honours System to better recognise women’s contributions to our community.

• Restore the Time Use Survey so we can better value women’s unpaid work; acknowledge its economic importance and drive better policy making.

Opposition Leader Shorten also said that entities bidding for Commonwealth dollars, whether in infrastructure or procurement or technology or services, would have to report on the gender pay gap and show what they are doing to close it.

Tanya Plibersek, Deputy Leader of the Opposition and Shadow Minister for Women, said that to make sure Centrelink can better help women and children escape family violence, Labor would invest in 25 family violence specialists so victims of violence won’t be put on hold for hours at a time. A dedicated family violence phone line would provide immediate advice and support.

Labor has also announced a $260 million National Bike Paths Strategy. It aims to encourage more people to ride bicycles to work or school and capitalise on the rapidly expanding cycling tourism market.

Labor says it will be the largest ever investment in bike paths from the Federal Government and “underscores our commitment to active transport”.

Anthony Albanese, the Shadow Minister for Infrastructure, Transport, Cities and Regional Development, said the strategy would fund infrastructure, and work with cycling organisations about how to promote education, safety and develop a culture of cycling, for transport and recreation. He said:

• Bookmark this link to cover our #AusVotesHealth election coverage.

PrevPreviousWatch these videos on improving physical health for people living with mental illness
NextLies, obfuscation and fake news make for a dispiriting – and dangerous – election campaignNext