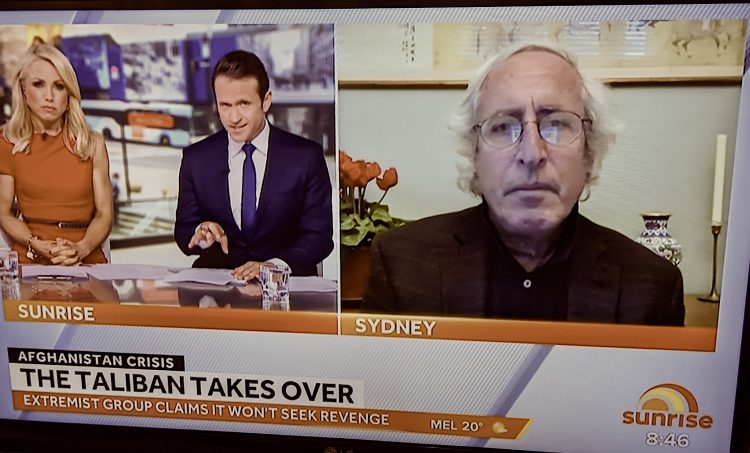 While undergoing radiation treatment last year, Bruce Wolpe continued his work as a US policy analyst. Photo provided by author.

The lump that went away: a cautionary tale

Medicare turns 38 today, a timely opportunity for reflecting on the strengths of our universal health insurance scheme as well as the importance of reform to make it more equitable.

On that note, political commentator and author Bruce Wolpe has a story to tell, with some reflections added by Associate Professor Lesley Russell, his partner.

The early thoughts: “Was this new? How new? Was it growing? Would it go away? Can’t be growing. Wait a few days. Dr Google has nasty suggestions about what a lump might mean, especially lymphoma. But no symptoms – no weight loss, fevers, sweats, fatigue. No change to my daily exercise. No pain. Not aware of the lump through the day or night. Not growing. How can you be sick if you feel fine? Chemo and radiation will be terrible. Will lose my hair. Ugly. Is it a little smaller today?  Still there after a few days. Scheduled to see my GP. Should I tell her? Can’t be a lump. It’s not going away. Women find lumps. Will tell her.”

I did tell our GP and she examined my lump which was right next to my lymph node. No other swollen lymph nodes. She started a process to get it diagnosed. Hoping it was a hernia but that was not to be.

In quick succession over the next three weeks: an ultrasound, which outlined the mass (4 x 2.4 x 3.3 cm); a fine needle biopsy; a gut specialist to check out my lower abdomen and pancreas, via an endoscopy, for any related cancer; MRI, MRCP and PET scans; and a bone marrow biopsy to check on any spread elsewhere.

The results were as good and promising as is possible when the diagnosis is cancer – follicular lymphoma stage 1, grade 3A, completely localised. The suggested treatment was 12 targeted low-dose radiation sessions. These were done in September. There were zero affects from the radiation. No burns. No fatigue. No interruption to work. I got in my usual 8-10 kilometre walks and gym sessions every day.

Finally, a PET scan in December was compared to the scan in August.  The 27 mm lump had shrunk to 8 mm. “Consistent with treated disease. No other abnormalities.”

The entire healthcare regime worked so well, even as the pandemic put huge pressures on the healthcare system. My GP knew the diagnostic steps that needed to be taken and helped schedule the first ones. Then she provided several references to excellent, highly attentive specialists to rule out the possibility there was cancer in the gut and then to drill down on the main game.

My care was coordinated by a haematologist at Royal Prince Alfred Hospital. He ordered the intensive diagnostic scans and biopsies and liaised with the radiation oncologist who outlined the precise treatment needed and scheduled the radiation sessions.

My doctor at RPA takes his cases to a multidisciplinary group of hospital-based doctors who meet regularly to review the information on their patients, leading to a concurrence of medical opinion on diagnosis and treatment. This process gave me the best medical judgment available on treatment.

The specialists were guardedly confident that as the lymphoma was isolated, the cancer cells could be targeted and killed.

There was also patient care and support. All the doctors stayed in close touch with me and my wife Lesley throughout. They were direct and so helpful.

They too were so very pleased with this outcome. They have recommended scans every six months for the next one to two years to ensure all is fine.

My gratitude and appreciation are an understatement.

My GP and the cancer specialists all agreed that the early detection was the difference between cure and long-term disease (which could have been treated and likely managed, but with far more extensive interventions and constant monitoring).

Almost all my care was bulk-billed to Medicare and there were no hospital in-patient costs. My out-of-pocket costs totaled about $2,300. I could afford that, but such a sum is a lot of money for a lot of households.

Those who make decisions about Australia’s extraordinary healthcare system must continually think about the costs to patients.

I wanted to share this story because it has a critical cautionary lesson for men. Women feel for lumps to check for possible cancer and we all know women who have endured breast cancer.

Men need that consciousness about their bodies too, over and above a skin cancer check. If you feel something that wasn’t there previously, go to your GP ASAP and don’t ignore it. It might be nothing; but it might be very serious. Your actions can save your future and your life.

As this story highlights, Bruce’s medical luck continues. But he also made his own luck by being proactive about his health, engaging fully with his doctors, and being endlessly, amazing, mentally positive.

Just taking the first step to talk with our GP was not as obvious as you might think. Our GP of more than 30 years had just retired, and we were just getting to know her replacement. (She has since revealed herself to be just a wonderful as her predecessor and with the same excellent referral network.)

As a health policy wonk, I have always been a big advocate for coordinated and multidisciplinary cancer care, and we felt that this really delivered value. We were always confident that we were offered the best information and the best treatment options.

All Bruce’s care was delivered as an outpatient and was largely covered by Medicare. We were grateful the out-of-pocket costs were limited, but also acutely conscious that costs that were manageable for us might prove a major barrier to care for many. What happens then? Would this prevent other Australians from receiving the timely care that was so critical to Bruce’s terrific outcome?

For me, this is a story worth telling publicly because it highlights that – even in the middle of a pandemic with the healthcare system and healthcare workers under enormous strain – there is still “care” in healthcare.

I suspect the doctors we saw are always interested in their patients as people rather than just a diagnosis and perhaps the new focus on telehealth has helped encourage doctors to keep in touch.

The regular phone calls and the responsiveness to any questions we had were extremely important and helped keep our spirits high during a time of medical uncertainty. We are grateful for all that thought and care – and, of course, for the final outcome.

Bruce Wolpe is a Senior Fellow at the US Studies Centre and has worked with Democrats in Congress during President Barack Obama’s first term, and on the staff of Prime Minister Julia Gillard. He has also served as the former PM’s chief of staff. Follow on Twitter: @bwolpe. He has written previously for Croakey: Postcard from an American holiday, for us this was not a medical disaster but a medical miracle. 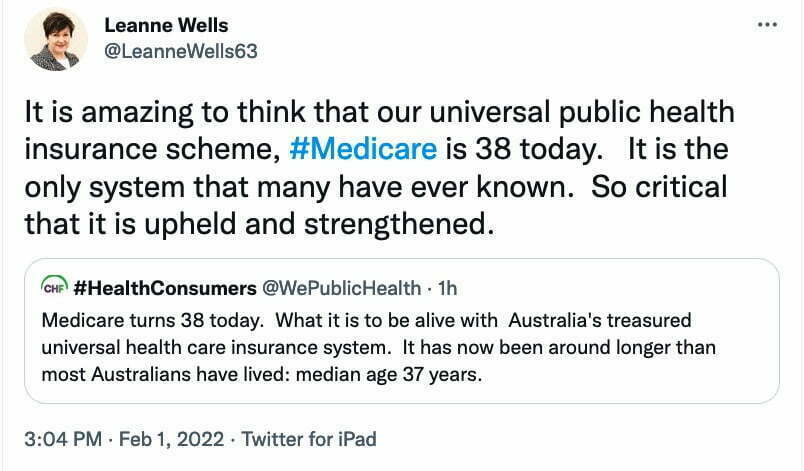