The AMA has been campaigning hard against changes to tax deductions for work-related self-education that are likely, amongst other things, to reduce the attractiveness of conferences in exotic locations.

Paul Smith, political editor at Australian Doctor, has exposed one of the vulnerabilities of the AMA’s campaign with a story about its Queensland branch’s annual conference, to be held at a luxurious venue in Chile.

It would be interesting to know the total value of tax deductions claimed by doctors for such trips every year. A related topic worth investigating is inequities in access to continuing education for the various types of health professionals.

Thanks to Paul Smith for allowing republication of his report below (part one is his original story, followed by AMAQ’s response.)

The AMA’s campaign against plans to cap tax breaks for medical education has been hit by revelations its Queensland branch will hold its annual conference in Chile at a five-star hotel with “lagoon-style swimming pool”.

The six-day trip to Santiago includes an “air and land” package costing up to $6700 per doctor, with delegates — according to the AMA brochure — staying at the Grand Hyatt, “home to world class, multi-cuisine, restaurants [and] a lagoon-style swimming pool with a waterfall”. 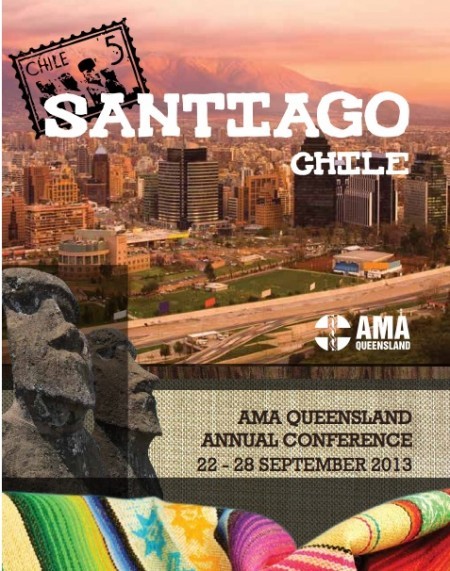 Expected to attract 140 doctors, the September event includes four half-day conference sessions with around 20 hours of medical education on topics such as an “Overview of international health systems and standards — how does Australia stack up?”.

Australian Doctor was told that 30 CPD points — accredited by the RACGP — would be available for GPs who attend.

The Federal Government has been universally savaged over its plans to introduce a $2000 cap on tax deductions for work-related self-education expenses.

In response, the AMA warned doctors across all specialities would face significant cost hikes for their medical education under the revamp, which is planned from July next year.

Last week, the AMA released results of an online poll of more than 4200 doctors, which found 98% believed the tax changes proposed by the government would “seriously impair” their professional development as a doctors.

AMA president Dr Steve Hambleton said at the time: “I don’t think the government has thought through the impact of these changes on doctors and a whole range of other professionals who must continually update their skills and knowledge throughout their careers, at their own expense.

“It will create a huge disincentive for doctors to pursue specialised education that benefits the whole community.”

Meanwhile, Unconventional Conventions — a medical education company also running conferences in exotic locations like the Arctic Circle and Mongolia — claims the proposed tax changes could mean an additional cost to doctors of $2000-$6000 to attend some events.

Currently, individual doctors can claim the whole cost of their trip as a tax deduction, typically at a rate of 45%.

But other providers offered 18-day conferences with as little as 12 hours of medical content, he claimed.

“I think that that’s how this issue has come about. People like them are running junkets, basically.” he said.

“Some people call what we do junkets as well, but when we run 30 hours of medical content in a five-day week, others would consider that to be almost a full-time working week.”

Unconventional Conventions co-managing director Margot Cunich said doctors would still opt to travel for their CPD because of the unique experience and peer interaction.

“They find that going to different parts of the world makes them more broad-minded. They like the opportunity we give them to go to local clinics or hospitals and sometimes do a bit of voluntary work, and see how the other system works, see what medical issues there are in other parts of the world.”

The conference theme is ‘Health Worldwide – challenges and directions’ and includes eminent speakers addressing issues such as: how Australia fares in comparison to international health systems, Indigenous and refugee health challenges, Medecins Sans Frontieres operations and opportunities, a PNG Case study and opportunities with Australian Doctors International, primary care for the homeless, medical education at home and abroad etc.

The conference is one of numerous professional development events coordinated by AMA Queensland each year which offer myriad opportunities for medical professionals to further their skills and experience.

The numerous benefits of attending such a medical conference include learning about the latest developments in medicine and health care, engaging with professional peers from Australia and overseas, collectively sharing and discussing ideas, theories and new information, and contributing to AMA policy development among others.

AMA members who attend the conference are self-funded and focused on improving patient care.