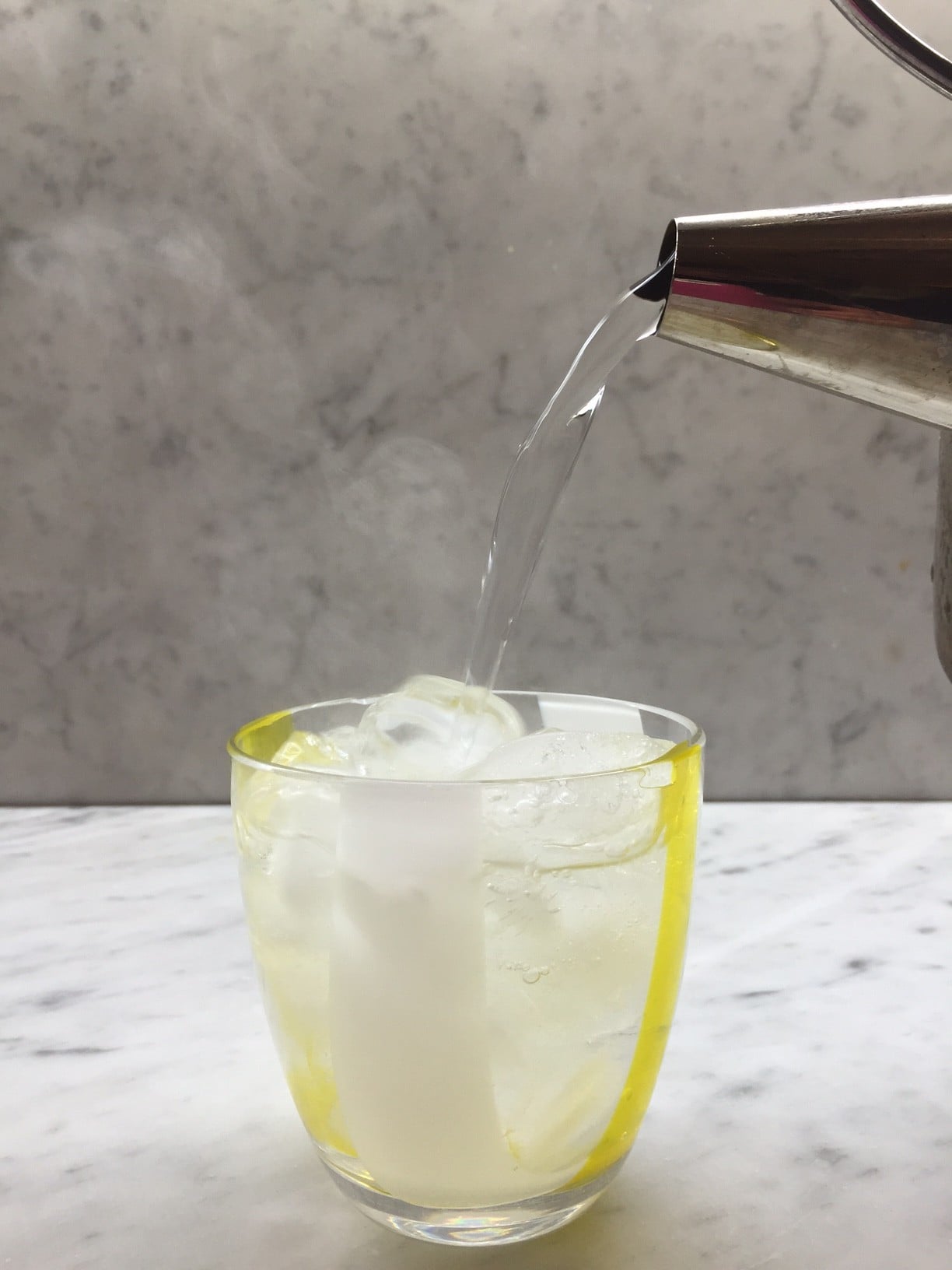 The Consumers Health Forum of Australia (CHF) today became the latest organisation to support the call to end the freeze on Medicare rebate payments, which was confirmed in the recent federal budget to have been extended to 2020.

The organisation has also called for “a wide-ranging review of health costs” to maximise the chances of success for the new Health Care Home models of care, and to preserve the future of universal access via bulk billing.

The CHF statement follows hot on the heels of the Australian Medical Association’s launch of a “national campaign against the Government’s Medicare patient rebate freeze”. The AMA will distribute posters and campaign materials to its more than 30,000 members around the country, which include GPs and all other medical specialists. The AMA was also encouraging doctors and patients to contact their MPs to protest the freeze.

AMA President, Professor Brian Owler, said in Sunday’s press release that the extension of the freeze to seven years would be untenable for some doctors:

“Many doctors have absorbed the impact of the freeze until now, but the two-year extension has pushed them over the edge. Their businesses are now struggling to remain viable.

“And it is not just general practice. It affects all medical specialties, including pathology and radiology, which are already reeling from the cuts to bulk billing incentives.”

CHF and the AMA join the Royal Australian College of General Practitioners, which launched its #youvebeentargeted campaign against the Freeze on May 9, the day after the announcement of the upcoming Federal Election. The RACGP has called on GPs and the public “to use social media and send template letters to political candidates to express their frustration and demand for a commitment to sufficiently funding patient services.”

“The RACGP wants this campaign to reveal which candidates are publicly committed to protecting Medicare, and which ones aren’t. We want them to pledge their support for an adequately funded world-class health system, including an immediate lift of the freeze.”

While at least 83% of General Practice consultations are bulk billed, many doctors have mixed billing practices. As evidenced in a study published last year in the MJA, whether or not a GP is bulk bills for a clinical encounter can vary from patient to patient, and consultation to consultation.

The study found that 30% of respondents were not bulk billed at their most recent General Practice consultation and that the mean out-of-pocket cost for these patients was $34. The authors concluded that the drivers of billing practices were not straightforward and that “caution [was] needed when considering changes to GP fees and Medicare rebates because of the many possible paths by which patients’ access to services could be affected.”

Croakey spoke to one mixed-billing GP who currently bulk bills about 60 percent of all consultations. While he said the freeze would be unlikely to cause him to raise his fees or to start charging healthcare card holders in the short term, he would need to think twice about discretionary bulk billing for patients requiring multiple visits, multiple family members requiring visits within a short period and other scenarios in which he would normally bulk bill as a “one-off”.

Meanwhile, an online survey conducted by medical newspaper, Australian Doctor, has found two-thirds of responding doctors, both bulk-billing or non-bulk-billing, said they would increase fees for adult patients without concession cards in the next 12 months.

Fewer than 30 percent of specialist attendances are currently bulk billed, with a 2014 report from the Grattan institute showing that Australians’ out of pocket expenses on health care are “high and rising.”

Labor leader, Bill Shorten has criticised the extension of the Medicare Rebate freeze his party initiated while in Government in 2013, but has not yet confirmed whether it would be lifted in the event of a change in Government at the upcoming Federal Election.

VACCHO has previously sounded the alarm about the impact of the Medicare freeze on the community controlled sector, which is also reeling from other funding cuts.

In a move that confirms that the Medicare rebate freeze is indeed a hot election issue, opposition leader Bill Shorten today announced that, if elected, a federal Labor Government would restore indexation of the Medicare Benefits Schedule from 1 January 2017. This would apply to all services provided by GPs, allied health and other health practitioners and medical specialists, but not pathology or diagnostic imaging.

The peak bodies who are opposing the freeze have welcomed the announcement with the Australian Medical Association (AMA) President Brian Owler telling Sky News that, while the AMA does not endorse one party or another,  “at the end of the day, this is very good news for patients if a Labor government were elected and lifted the freeze, because essentially this is the patient’s Medicare rebate.”

The Australian Healthcare and Hospitals Association (AHHA) also weighed in, welcoming the opposition leader’s pledge to end the freeze if elected. AHHA Chief Executive Alison Verhoeven said in a media statement, “This decision would ensure bulk-billing and affordable health care for all Australians via policy, rather than counting on market forces to deliver it by chance.”

CEO of the Consumers Health Forum (CHF), Alison Wells said the forum welcomed Labor’s pledge to end the Medicare freeze, and and called on the federal Government to do the same.

“Earlier this week, we urged both sides of politics to end the freeze and to undertake a thorough review of health costs… While Labor estimates it will add $2.4 billion in costs over the forward estimates this is a reasonable price to pay if it means maintaining reasonable access to quality primary care for all Australians.”

“The policy shift by Labor lifting the Medicare freeze on general practice makes sense at so many levels: the RACGP has repeatedly underlined the risk to quality patient care, the potential worse health outcomes for individuals, the increased on costs to our extraordinary expensive hospital system, and the unintended but inevitable consequences to practice viability.”

He said the RACGP would continue its#youvebeentargeted campaign.

“We urge the Federal Government to act now – reverse their freeze; it’s bad economics and it’s bad for the health of all Australians.”

And on twitter, the news broke early and reverberated throughout the day: 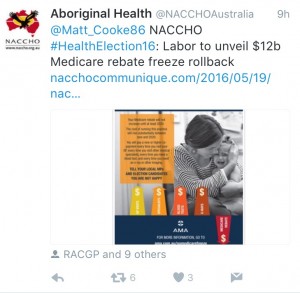 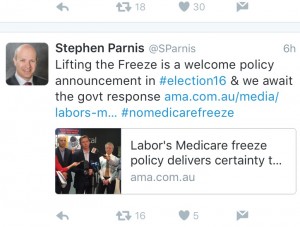 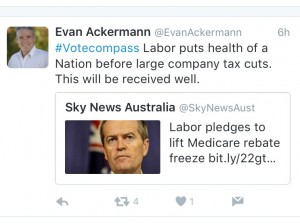 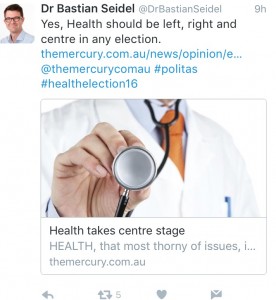 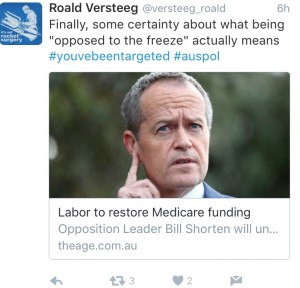 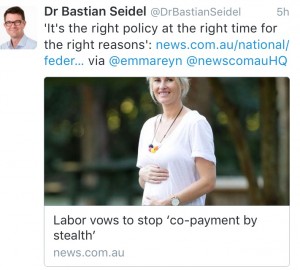 Previous Croakey articles on the latest Federal budget are here:

*For those in Sydney, the Menzies Institute of Health Policy is holding a public seminar on May 18, led by Associate Professor John Dugdale and discussing the implications of the 2016 Federal Budget on universial health coverage in Australia

PrevPreviousGoodbye Digital Divide, Hello Digital Equity (and why we need to go the extra mile to get it)
NextTowards recovery: exploring mental health issues in times of changeNext