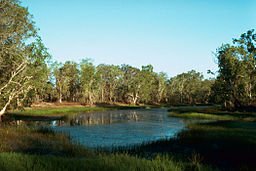 One of the outcomes of the Labor Party’s landslide election win in the Northern Territory earlier this year was a moratorium on hydraulic fracturing of onshore unconventional gas reservoirs (fracking), pending the outcome of an independent inquiry into the practice.

A call for submissions to the inquiry’s terms of reference closed recently, having garnered 364 submissions. One of them was from Doctors for the Environment Australia.

In the post below, Dr Rosalie Schultz and Dr David Shearman, both members of Doctors for the Environment Australia ask the important question of who benefits if fracking is allowed to go ahead in the NT, and give their recommendations for making sure health considerations are front and centre as the inquiry proceeds.

If gas is developed in the Northern Territory whose interests will it serve? Certainly not the public’s.

The revenue it will bring to the community is questionable.  A report from the Institute for Energy Economics and Financial Analysis shows the Northern Gas Pipeline will be the most expensive pipeline in Australia, and that the current global gas glut will make it uneconomic.

What is unquestionable about going ahead with this pipeline are the risks to public health.

Doctors have long drawn attention to the problem of insufficient evidence that coal seam gas (CSG) mining is safe, and the need for the  precautionary principle, because of the potential for “serious and irreversible harms”.

While shale gas has received less media attention in Australia, its known health risks are essentially the same.

In 2013 the AMA Federal Council called for nationally-consistent standards requiring that all CSG developments be subject to rigorous and independent health risk assessments. This requirement has still not been met. Since there is no evidence that shale gas is safer than CSG, these standards should be expanded to include all unconventional gas development.

In a process that recently closed, The NT government wisely called for submissions on the terms of reference for its inquiry.

In our submission to the inquiry, Doctors for the Environment  highlighted the essential requirement that medical expertise be included in the panel, to properly consider the potential harms to health. It is also vital that there be Indigenous representation on the Panel to consider societal impacts to Indigenous people and their country.

Few of the chemicals used in fracking have undergone comprehensive safety assessments and, surprisingly, public disclosure of these chemicals is not always required. Of equal concern are chemicals released from coal seams or shale and brought to the surface with waste-water and stored in retention ponds. There are additional health concerns about noxious emissions from venting, flaring, machinery and trucks.

The information we do have suggests that, if the dose and exposure are sufficient, some of these chemicals have the potential to adversely affect health and in long established gas-fields in the US there is a possible increase in birth defects.

Particularly troubling in the NT is the large volume of ground water used for gas mining; water that may be needed for human and stock consumption. Ground water is already being extracted at unsustainable rates in the NT, and Aboriginal communities are at particular risk. Futhermore climate change will bring an increasingly unstable climate to NT and its arid regions, requiring an additional margin of water-safety.

Protection of water resources requires that baseline data on available water be collected prior to any further oil and gas development, whether or not fracking is to be considered.

Such a water assessment is threatened by the view of the Federal Resources Minister, Senator Matt Canavan, that responsibility for the “water trigger” (IESC) assessments be returned to the States. We believe there is a potential for loss of essential national expertise if  the national committee is disbanded.

Minister Canavan says a blanket ban on fracking in the NT would amount to “an act of economic self-harm”. On the contrary, medical organisations believe it to be a wise act of self-preservation until evidence of safety is available.

Dr Rosalie Schultz is a Northern Territory GP and public health physician. She is also a member of Doctors for the Environment Australia.

PrevPreviousNature provides a therapeutic setting for the Indigenous Sámi peoples
NextPlaying with the Trump card: health has champions to stay the gameNext