The Pacific went a year without COVID. Now, it’s all under threat

Introduction by Croakey: A new COVID-19 alert was today raised at Brisbane’s international airport after two travellers, one who has now tested positive for COVID-19, were accidentally let into its green zone yesterday after arriving on an Air Niugini flight.

It again highlights the ongoing concerns about escalating infections in Papua New Guinea, on Australia’s doorstep, that are putting the nation’s fragile health system under dire pressure and raising risks also for Torres Strait Islander people.

PNG is not the only Pacific nation at risk, not just from infections but also barriers to roll out vaccinations which could isolate them further and significantly impact their economies, writes Jonathan Pryke in the piece below, originally published at The Conversation.

For most of the last year, the Pacific Islands have been remarkably isolated from the devastating effects of the COVID crisis. By walling themselves off early from the outside world, most Pacific nations remain completely COVID free.

Historians will look back on this as a remarkable achievement by Pacific nations, and a great credit to the swift actions taken by their leaders.

While isolation has proven itself to be an effective preventative strategy, it is not a perfect one. Border closures have taken an severe toll on these nations’ fledgling economies.

And even the most robust border and quarantine control systems can break down. In the Pacific, the cracks are now starting to show.

Read more: If Papua New Guinea really is part of Australia’s ‘family’, we’d do well to remember our shared history

The most obvious case is in Papua New Guinea, where caseloads started surging exponentially two months ago.

With a porous land border with Indonesia and weak quarantine controls, it’s remarkable the virus did not get out of control sooner. However, it is now running unchecked in the capital, Port Moresby, and has spread to every province in the country.

The health system came very close to complete breakdown in March, and despite hopeful signs of case numbers stabilising in the capital (now at a much higher level), the country remains in dire need of further assistance. 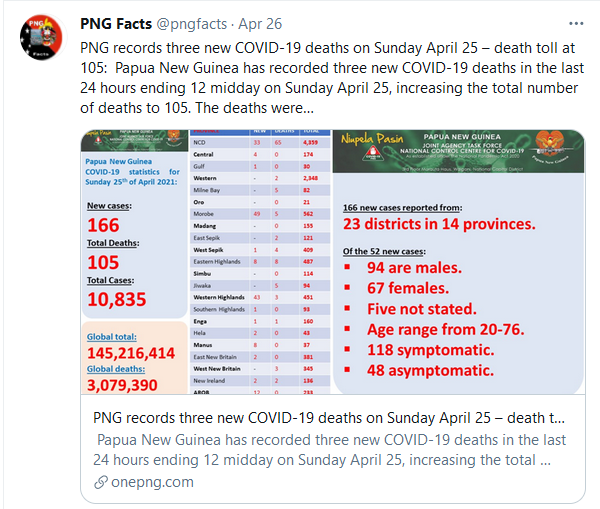 Fiji was the most successful nation in the region in containing community transmission a year ago. It, too, is now showing cracks in the armour.

In a familiar story, a soldier working at a quarantine facility caught the virus from a traveller who had recently returned from India. Now identified as the new and extremely infectious Indian strain, it has quickly spread.

Much of the country’s main island of Viti Levu is in lockdown as contact tracing is conducted. While Fiji is the most capable country in the region to handle an outbreak, it also comes at a terrible time for the tourism-dependent nation, which is desperate to reopen to the Australian and New Zealand markets.

Over in Vanuatu, the dead body of a Filipino sailor from a visiting cargo vessel that washed ashore on April 11 tested positive for the virus. The vessel is now in Australian waters, with all but one of the 12 sailors on board testing positive for COVID-19. 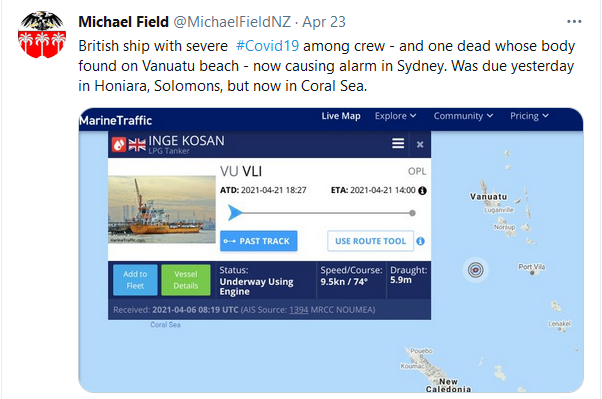 Getting vaccines is step one

The solution to the Pacific’s imperfect isolation strategy is the same as Australia’s – vaccines.

Given the enormous global demand for vaccines, and the small size and limited bargaining power of Pacific Island nations, there has been a very real threat they would be left at the back of the queue in the vaccine scramble.

However, assertive work by donor nations like Australia and New Zealand, combined with access to the World Health Organisation-led global COVAX facility, has so far meant Pacific nations are not being left out in the cold.

The North Pacific nations of Federated States of Micronesia, Marshall Islands, and Palau are well on their way to being fully vaccinated courtesy of the United States’ Operation Warp Speed program. 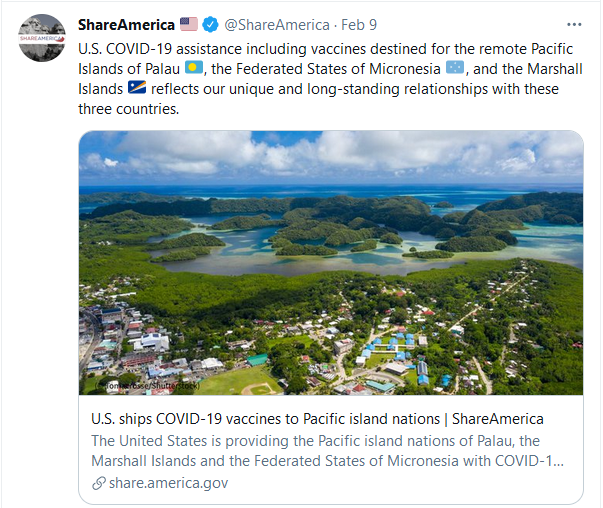 Initial batches of between 4,800-132,000 doses of AstraZeneca vaccines have also been delivered to Fiji, Nauru, PNG, Samoa, Solomon Islands, Tonga and Tuvalu via the COVAX initiative.

Australia sent an emergency batch of 8,000 vaccine doses to PNG in March, and is now sending 10,000 locally produced AstraZeneca doses to the region each week. This number is likely to climb as production ramps up and the appetite for AstraZeneca wanes at home.

China is also poised to do its part, offering 200,000 Sinopharm vaccines to PNG and 50,000 to Solomon Islands.

Both PNG and the Solomon Islands are adamant that they will not roll out the vaccine until it receives approval by the WHO, but the presence of Chinese vaccines ups the stakes for the vaccine diplomacy battle now underway in the Pacific.

Read more: China wants to be a friend to the Pacific, but so far, it has failed to match Australia’s COVID-19 response

Logistics are now the big challenge

Just two months ago, the worry for most Pacific nations was getting hold of vaccines. For many, the challenge has now quickly morphed to a larger, and much more challenging, question — how to roll them out.

There are enormous challenges involved with an effective rollout campaign in many countries, especially those with many islands like Kiribati or Solomon Islands or with large populations in remote communities spread across mountains and islands, like PNG.

Read more: We can no longer ignore the threats facing the Pacific — we need to support more migration to Australia

Illustrating this point, of the 8,000 doses Australia provided to PNG more than a month ago, only 2,900 have been administered. While some nations, like Fiji, have quickly run through their allotted COVAX vaccines, others, such as PNG, run the risk of vaccines expiring before they get into people’s arms.

It will take a much more significant and coordinated effort from Pacific nations, and all of their donor counterparts, to effectively vaccinate the region.

A massive logistics campaign tailored to the needs of each nation must now get underway. NGOs, churches, and the private sector should all be expected to do their part. Alongside this, the Pacific nations need smart and widespread information campaigns to promote the efficacy and importance of the vaccines and help overcome misinformation and stigma.

If more concerted effort is not applied to getting needles into Pacific Islanders’ arms, then at best these countries will be left behind as other economies open up to one another, and at worst quarantine systems will fail and the virus itself will overwhelm their vulnerable systems.

The Pacific region has done extremely well in combating the COVID crisis to date. Let’s not stop now.