Home Healthcare and health reform out of pocket costs 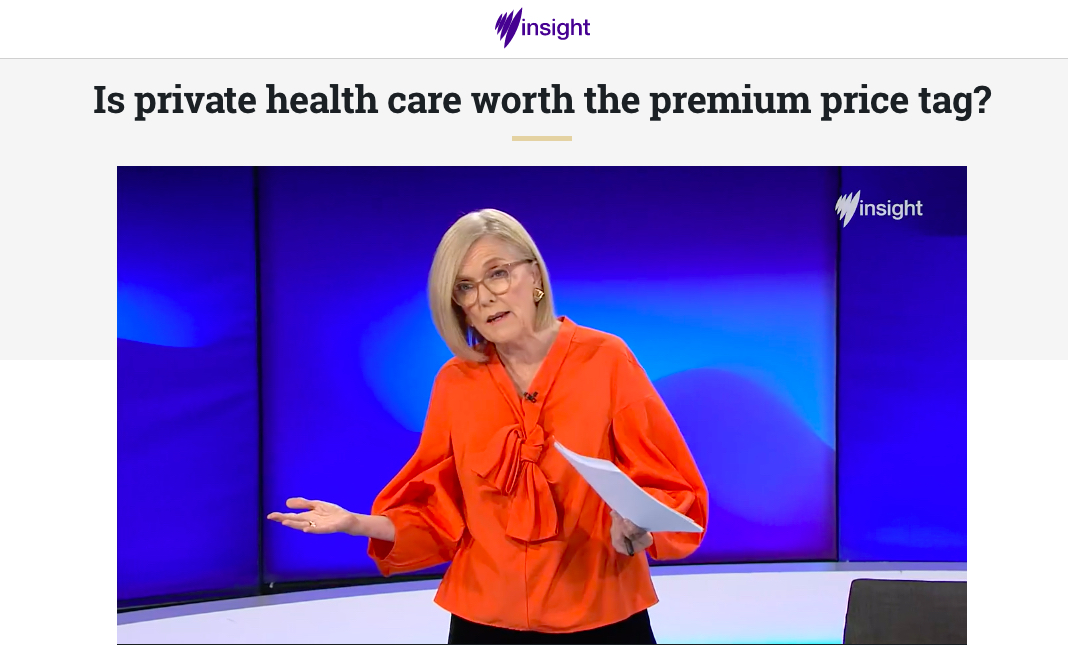 The Private Health Insurance dilemma: a product in search of a role

Introduction by Croakey: Medibank has announced that it will become Australia’s first private health insurer to make potential out-of-pocket (OOP) costs publicly available in a move to shore up public trust, after winning a ‘Shonky’ award from consumer group Choice for “junk” policies that “cost more and deliver less”.

In a crowded field of PHI contenders, which Choice described as a “confusopoly”, it awarded Medibank the dubious honour for its basic accident and ambulance cover earlier this month, describing it as a “slippery financial product [with a] special sheen of shonkiness”.

Choice described the PHI sector as “in shambles” and said the “product itself often delivers very little value for money”:

In a recent CHOICE Consumer Pulse survey, PHI topped the list of Australia’s money-related worries, and young people are bailing out of the product in droves. That’s no surprise, really, given that many policyholders get hit with big out-of-pocket costs even after they’ve paid top dollar for cover year after year. And, of course, the cost of private cover just keeps going up.”

Insisting it was “listening to customers”, Medibank said Tuesday it had launched an updated ‘Find a Provider’ tool with information about potential OOPs.

It’s a reasonable expectation to be able to access this type of information, so we’re putting the power back in patients’ hands.

We are the first health insurer to make this level of information available to customers on our own website. We know customers want more information about the hospitals and doctors near them, so we’ve been progressively upgrading our online tools.

Australians need greater transparency on what their healthcare experience will be like and what it will cost. We’re working hard to make private healthcare more affordable, easier to use, and provide greater value.”

In this piece for Croakey, following two recent broadcasts on PHI, Jennifer Doggett and Lesley Russell explore some of the real questions we ought to be asking about this heavily subsidised, increasingly contentious industry.

Private health insurance (PHI) has been in the spotlight again with two recent programs (Insight on SBS and ABC’s The Drum) exploring PHI’s role in the Australian healthcare system and why, increasingly, Australians are rejecting this as poor value. Should the Government be reaching the same conclusion?

As the cost of PHI grows for both consumers — with premiums rising faster than the cost-of-living index, and out-of-pocket (OOP) costs too often substantial and hidden — and government (the annual cost of the PHI rebates and Medicare for private services is at least $9 billion and may exceed $12 billion), so does the need for a comprehensive and independent inquiry into PHI and the private health sector more generally.

A strength of the two television programs was that they gave voice to consumers and consumer representatives who clearly articulated a range of problems they had experienced when using the current system of PHI and private health care.

Many of the consumers appearing on these programs described feeling let down by a system that fails to offer the assurances that should come with an investment in insurance.

Some reported finding that the claimed benefits for PHI, such as a choice of doctor, were not always available.  Some were annoyed that they had not been made aware of the public sector options open to them, or had incurred unnecessary expenses based on false assumptions about the need for them to access private services. Yet others had become disillusioned with PHI when they needed comprehensive care and found that they were more likely to get the multi-disciplinary services they needed, including access to clinical trials, in the public system.

Unfortunately, these experiences are not isolated examples but reflect the findings of research in this area that the current system does not support consumers to make informed choices about their options or provide affordable access to healthcare for many people with complex health care needs. The benefits of PHI – real or not – are unavailable to many on the basis of geography or cost, and there is growing recognition that the touted ability of those with PHI to “jump the queue” for elective surgery aggravates current healthcare inequalities. It has made Australia’s healthcare system “unfair and muddled”.

Tonight on #TheDrum we are doing a special on private health insurance. 44% of Australians are privately insured – is the system working? Why are young people opting out? What’s driving rising premiums & out of pocket expenses? And why do we have both private & public healthcare? pic.twitter.com/63MecjzsMp

These problems reflect some systemic problems with our current public / private healthcare system.

There are difficulties in defining a clear role for PHI in the context of a universal healthcare system to which all contribute through progressive taxation. Funding mechanisms for both the public health system (Medicare and public hospitals) and the private system (PHI funds and private hospitals) reflect a focus on isolated episodes of acute care, when today’s healthcare issues are around the prevention and management of chronic conditions.

Professor Stephen Duckett from the Grattan Institute has outlined how the current “death spiral” for PHI arises from a vicious cycle of rising premiums and an increasingly older and higher-risk pool of health fund members.

There is a range of reasons why young people are much less likely to value PHI than those over 65, including better health (on average), lower levels of income, other cost pressures and greater trust in Medicare. These underlying problems are the reasons that the financial carrots and sticks that governments have set up (not to mention advertising scare campaigns) are no longer effective.

Representatives of the PHI sector on these programs and in the broader media debate about this issue have shown a disappointing lack of willingness to address the problems experienced by consumers when using their products. Solutions proposed by health funds and their representatives, including abolishing Medicare, increasing public subsidies and removing community rating, and a push for tax exemptions to allow employers to buy health insurance for their workers, are more focused on propping up the PHI sector than on supporting equitable access to healthcare for the Australian public.

It is clear from this that the PHI sector will not generate consumer-centred solutions to the problems with PHI.  As was the case with the Ministerial Advisory Committee on Out-of-Pocket Health Care Costs, solutions to health funding issues are unlikely to come from those benefiting from the current situation. The funds (and the doctors who profit from them) have come to rely on the Government’s multi-billion dollar subsidies and are therefore going to do whatever it takes to maintain — or even increase — this government handout.

It’s also important to remember that some of the largest PHI funds, such as Medibank Private and BUPA, are for-profit companies answerable to a board and shareholders. They are therefore focused on delivering profits, a goal which does not necessarily reflect, and may sometimes conflict with, the best interests of Australian consumers. 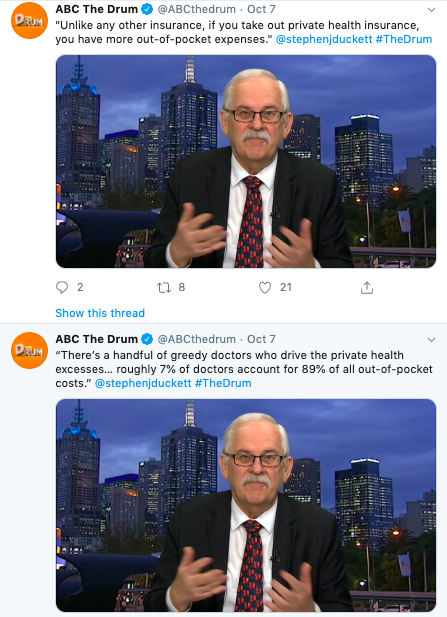 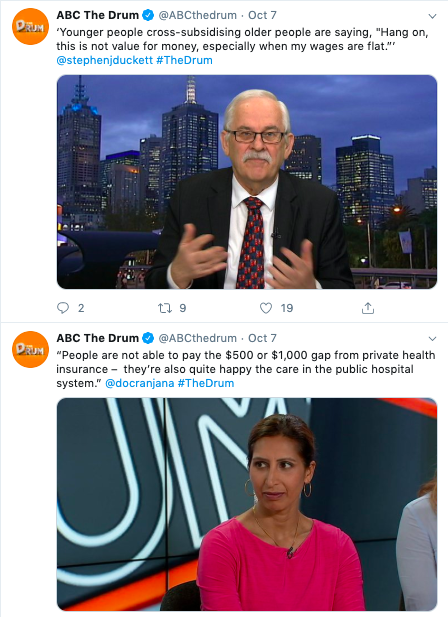 It is shocking – but perhaps not surprising – that the Minister for Health has been slow to act on meaningful reforms (to date these amount to a tiered policy system that has to drive people to either more expensive policies or higher deductibles) and to reject some of the more outrageous proposals from the funds. Indeed, the Prime Minister has signaled a biased focus in stating that his government will listen to all suggestions to arrest the slide in private health insurance.

For all these reasons, it is imperative that we have a comprehensive and consumer-focused inquiry into PHI. As proposed by Labor before the last federal election and others, this needs to be conducted by an independent body, such as the Productivity Commission. This would enable the inquiry to address issues such as whether the PHI rebate and other subsidies would deliver better value if allocated elsewhere in the healthcare system and whether there is a conflict of interest between the obligations to members and shareholders of for-profit health funds. The inquiry should not start from the premise that the PHI industry must be protected at all costs.

As the consumer representatives on Insight and The Drum made clear, problems with OOPs are among their most pressing concerns when using PHI and therefore need to be addressed in any inquiry focused on finding sustainable private health funding options for the future.

A consumer-focused inquiry should also specifically address the needs of consumers with chronic and complex health problems. These are the most frequent users of the healthcare system, and also those with the largest OOP costs. Yet both the public and private healthcare systems, and their funding streams, are very poorly designed to meet their needs. 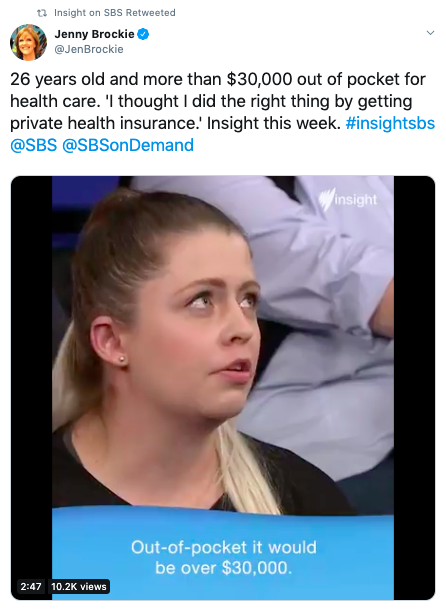 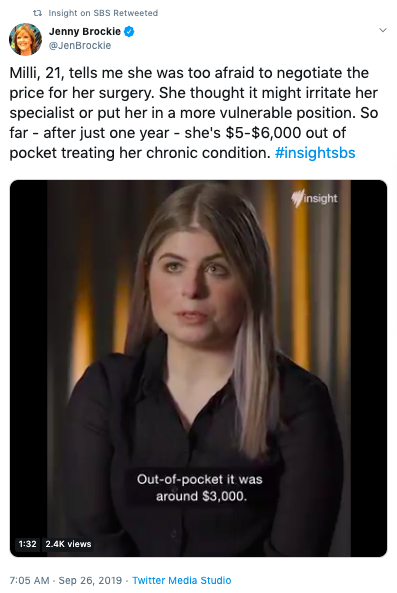 Other questions an inquiry should seek to answer include:

These questions raise issues that could potentially result in fundamental and long-term changes to our health system. They must be considered an integral part of the recently-proposed Long-Term National Health Plan, under which the Morrison Government says it is committed to reforming the health system to be “more person-centred, integrated, efficient and equitable”.

While this is a challenge, it is also an opportunity to address some of the broader problems with our health system and to work together to develop more efficient, equitable and sustainable funding mechanisms to meet our future health care challenges. But there are powerful and well-funded interest groups who are actively resisting changes.

Ongoing engagement and advocacy from the health sector and the broader community will be required to ensure the government of the day implements an inquiry with appropriate terms and reference, and then acts on reform recommendations from the inquiry, especially those which might deliver benefits to consumers at the expense of healthcare providers and the PHI sector.

Without this sustained effort, there is a risk that the government will spend more public money on an inquiry and then ignore its advice in favour of keeping the powerful PHI on side and maintaining the current fundamentally flawed system.

Jennifer Doggett is a Croakey Editor, AHCRA Chair, and fellow at the Centre for Policy Development.