This image features in a new UK documentary. Screen grab from The Race is On: Secrets and Solutions of Climate Change.

The Race is On – a timely new documentary on climate change

It was during “an otherwise unremarkable lecture” to students a few years ago that UK academic Dr James Dyke decided he needed to cross what he saw as a line between academia and activism.

The result is a new documentary, The Race is On: Secrets and Solutions of Climate Change, which is freely available online and likely to be of interest and use to Croakey readers.

Dyke recalls the seminal moment with his students, in an article published in The Conversation:

I was discussing atmospheric concentrations of carbon dioxide in the atmosphere over time, and pointed out that this has been increasing ever since they were born. On each one of their birthdays, there was more CO2 in the atmosphere than on the same day the previous year. Every additional birthday cake candle celebrated another one, two, or even three per cent.

As I spoke, I looked into the faces of a generation that had been completely failed by their predecessors. It is a failure which came despite two decades of the science being perfectly clear that increasing CO2 concentrations would produce further warming, and that dangerous changes to the global climate were lurking.”

That was when Dyke realised that the changes he had already made in his professional and personal lives – avoiding flying, reducing meat and dairy consumption, cycling rather than driving, and switching to a green energy supplier – were “hopelessly inadequate”.

He spent the next three years working on the crowdfunded documentary, together with film maker Paul Maple of Global Documentary. It was also, as he writes in The Ecologist, a response to his own frustration at the narrowness of so much of the public debate around climate solutions.

Amongst other things, the 39-minute film makes the case for the development of transformative economic theories – “mainstream economic theory is stuck on a collision course with the climate and we don’t have much time to turn it around” – and leadership from all levels, from households to governments, as part of the solutions to climate change.

The film also makes a strong call for individuals to act, stating that “what you do over the next 20 years” is crucial, and with one expert calling for everyone “to unleash a sense of collective purpose”.

The fossil fuels we burn as part of our daily lives are changing the earth’s climate.

What you do with this knowledge makes you one of the most important people in all of human history because you have the chance to change how we power our civilisation and so avoid dangerous climate change. So far only a very small section of our society truly understands the scale of the changes required and how little time we have left to make them.”

One of the more powerful quotes during the film comes amidst aerial shots of fracking in Texas and Australia:

The increasing risks going forward in a business as usual scenario are equivalent to us as a society playing Russian roulette with ever more chambers filled with a bullet, and us holding it to our children’s head.”

One of the experts interviewed is Kate Raworth, who describes herself as “a renegade economist focused on exploring the economic mindset needed to address the 21st century’s social and ecological challenges”. She is the creator of the Doughnut of social and planetary boundaries.

Raworth, a Senior Visiting Research Associate at Oxford University’s Environmental Change Institute, makes the case for developing new economic theories that are fit for purpose in the 21st Century.

Instead, she says that universities are teaching outdated economic theories that align with neoliberalism, which holds that the markets should rule, the state is incompetent, the Commons should be sold off and that society as such doesn’t exist.

Mainstream economic theory has been so resilient in the face of financial crisis, climate change and extraordinary levels of inequality, Raworth says, “because it is incredibly convenient for vested interests who are profiting from this…very narrow, market-based competitive economic theory”.

The challenge today is that, economics that students are learning and that policy is being driven by, that is being discussed in our Parliaments and written about in media, it’s based on the textbooks of 1950 and those in turn are actually based on the theories back from 1850.

Economic theory is literally centuries out of date. It’s no wonder that the students at universities are rebelling because they know that what they are being taught is in no way equipping them for this future.

…If we’re going to transform it, so we recognise climate change and extreme inequality, we need to rewrite that script and come up with an economic theory that fits the 21st Century.”

Raworth urges viewers to “be like little butterflies that trigger off a bigger effect” and become part of building a critical mass to change the economy.

“We can ask ourselves, If I want to be part of creating an economy that works for all, that is distributive and regenerative, how does the way that I shop, eat, and travel affect that? How does the way that I bank, invest, volunteer, demonstrate, all these ways that I’m actually contributing…

She also warned against being conceptualised or labelled as a “consumer”, which is a neoliberal view of people.

“We are not consumers,” she says, “we’re citizens, we’re neighbours, we’re demonstrators, we’re voters, we’re volunteers…in this lies all of the richness of the ways that we contribute to the new economy.”

During the film, experts repeatedly make the point that the tools for effective climate action are available, but what is lacking is political will.

An evolutionary biologist, Professor David Sloan Wilson, SUNY Distinguished Professor of Biology and Anthropology at Binghamton University, discusses the importance of poly-centric governance, and says that climate change cannot be solved only at a global scale but requires action at all levels, from single households to small groups, cities and states.

Policy-centric governance means joining with others to effect change where we can, while continuing to press for action at other scales, he says.

Rebecca Kinge, from the Southamptom Collective, describes some of the work being done by communities, including transition towns. (The Transition Network site describes “a movement of communities”, now in more than 50 countries, coming together and “reclaiming the economy, sparking entrepreneurship, reimagining work, reskilling themselves and weaving webs of connection and support”.)

Kinge tells viewers: “People would be astounded if they knew how much positive sustainable action is happening in cities and towns across the world.”

The film ends with Kate Raworth citing a US inventor and thinker, Buckminster Fuller (1895-1983):

You never change things by fighting the existing reality.

To change something, build a new model that makes the existing model obsolete.”

The film makes timely viewing in Australia at a time when the federal election campaign has exposed the paucity of our public and policy debate. Much of the media framing of climate election discussions has undermined the urgency of action, with endless questions about the costs of climate action aligning with the interests of fossil fuels industries and their political supporters.

Meantime, there is the unedifying sight of Labor arguing that they have a climate action plan (which they do, relative to the LNP), while at the same time supporting new coal mines and expansion of fracking (which means they don’t, really).

It is moving to watch the film as the school strike movement gathers force, holding protests yesterday outside politicians’ offices around the country (see tweets and photographs below).

Interviews such as this remind us forcefully that the lack of political leadership on climate change is already hurting children. A young girl asks tearfully, what’s going to happen to the whole world if no one does anything?

Dyke and colleagues will tour their film across UK communities. It is released under Creative Commons and there are no charges for viewings.

From the 3 May school strike 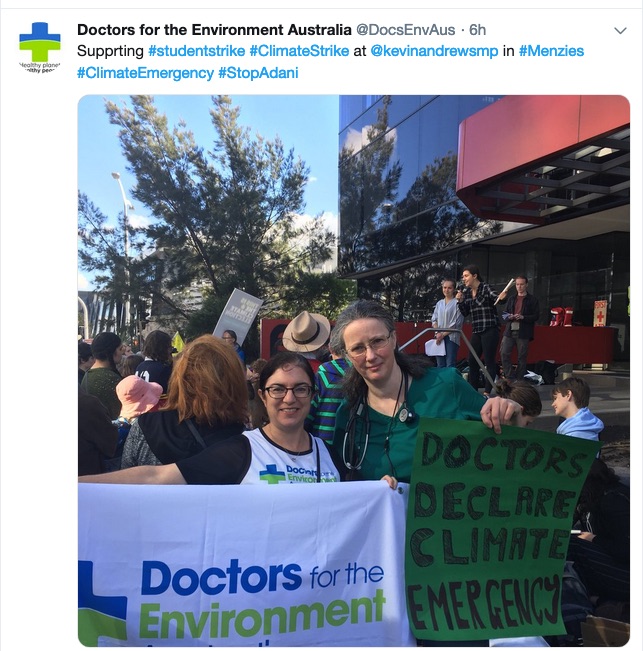 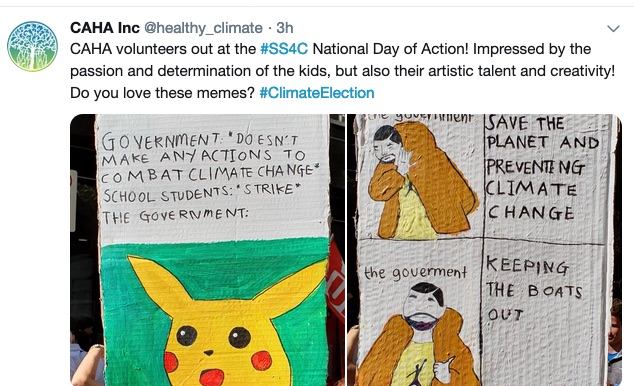 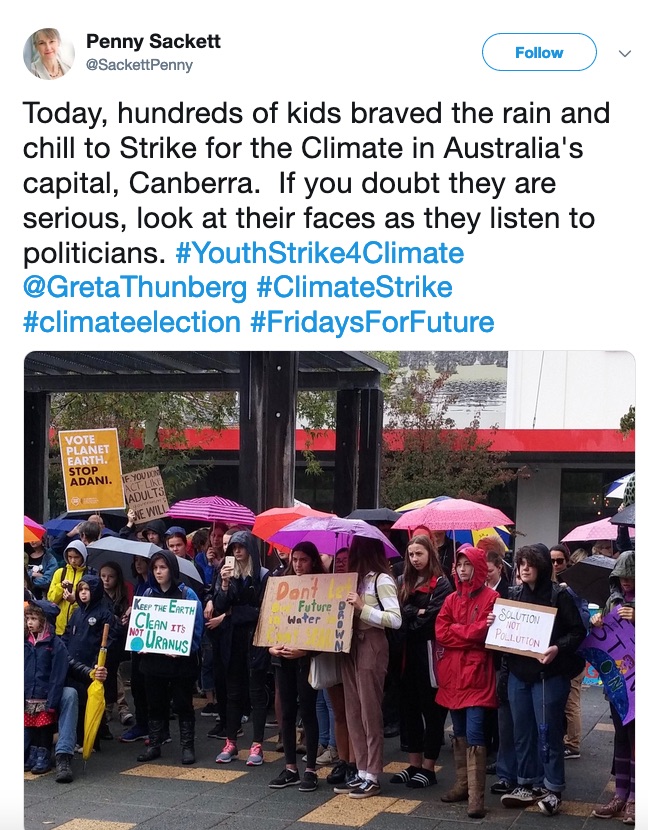 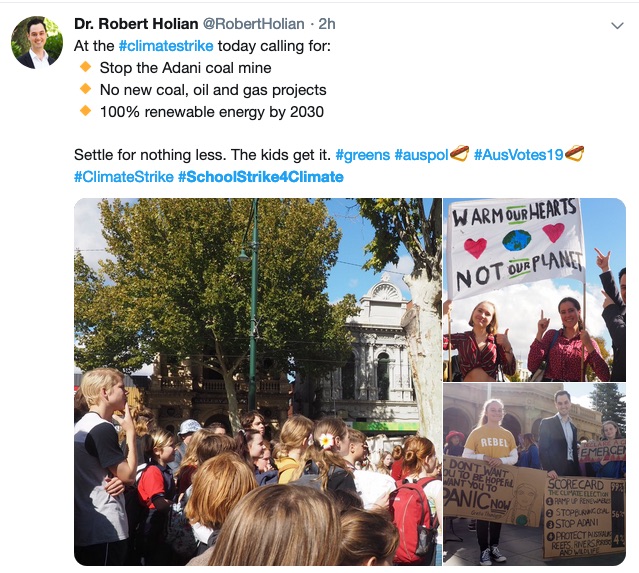 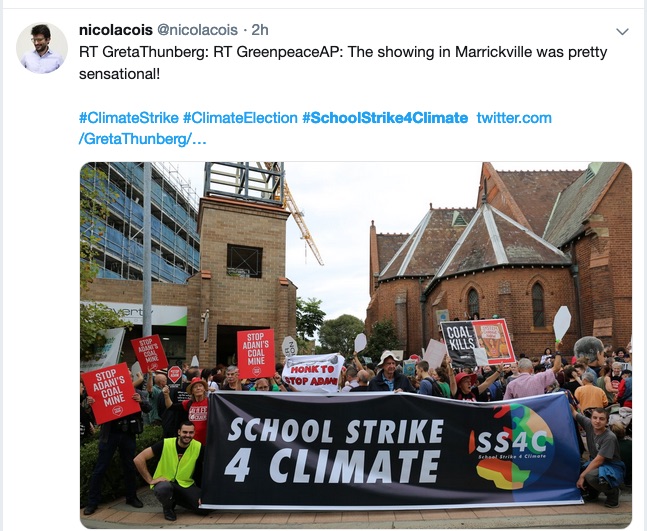 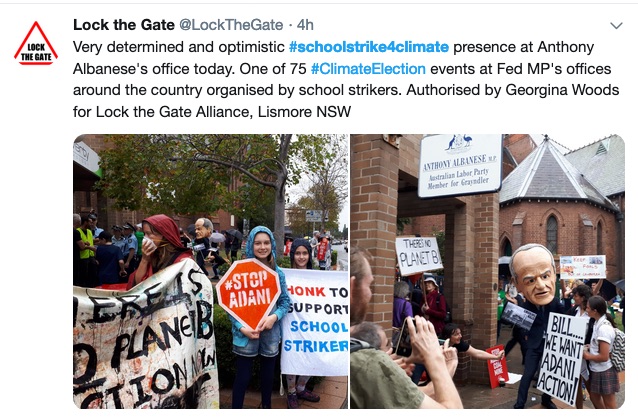 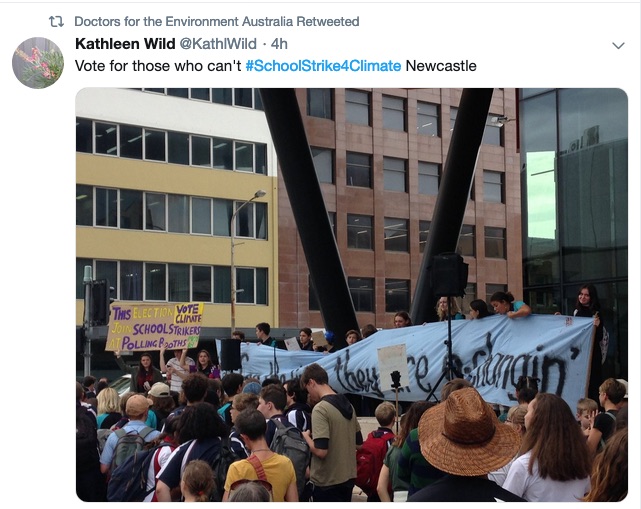 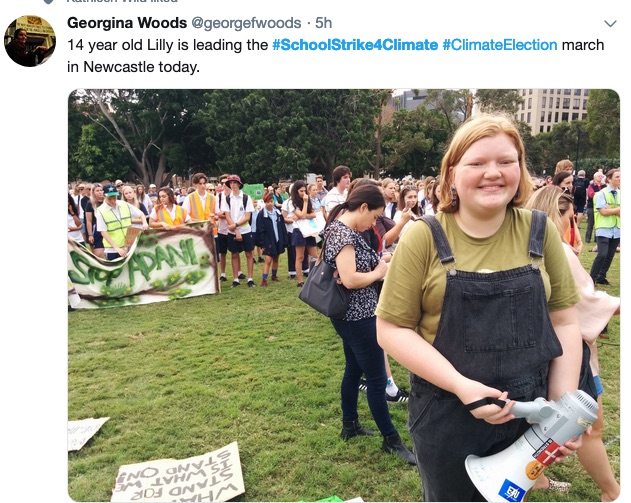 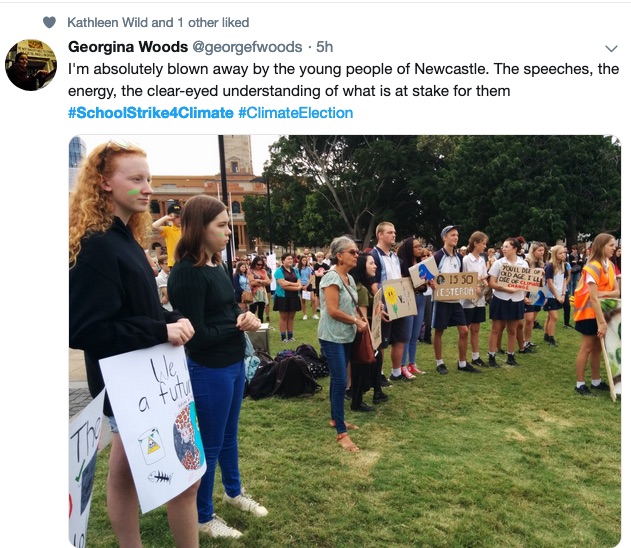 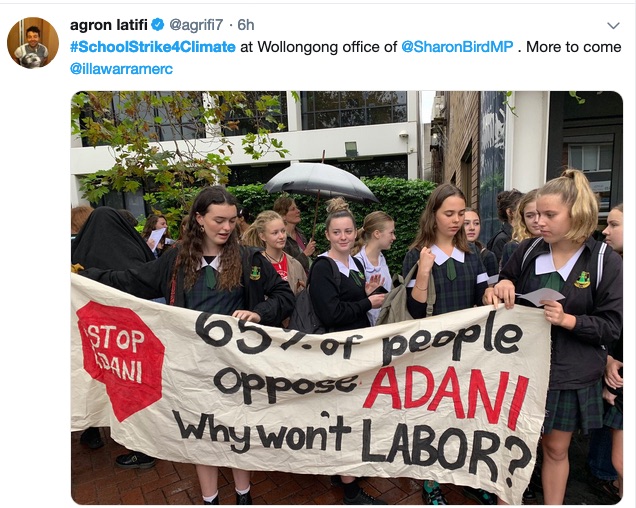 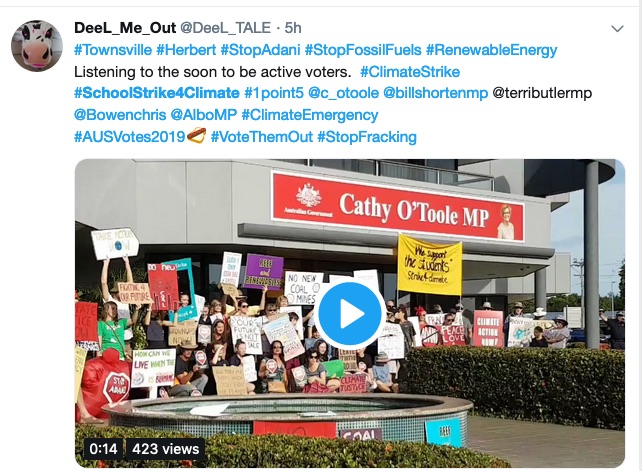 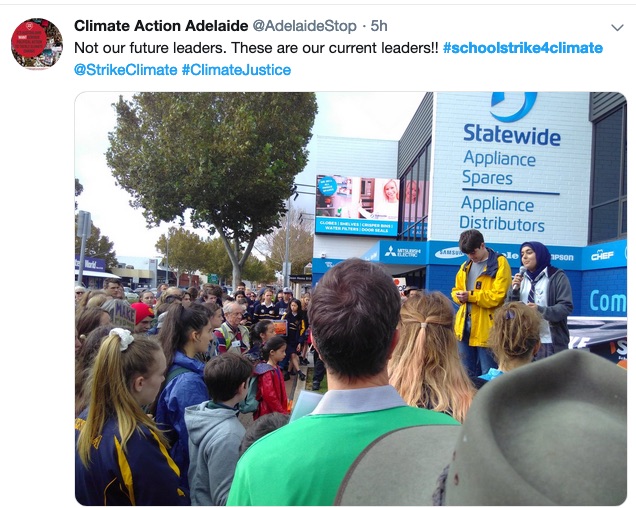 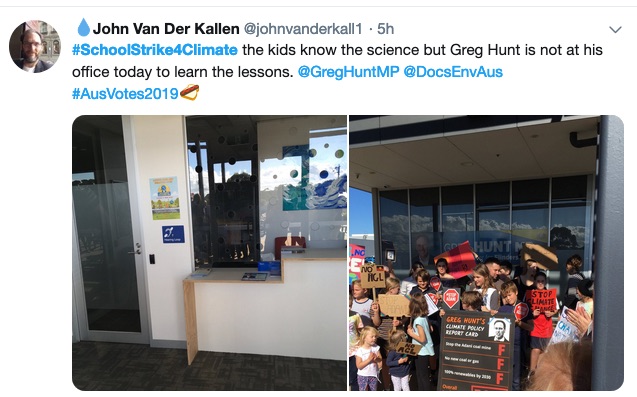 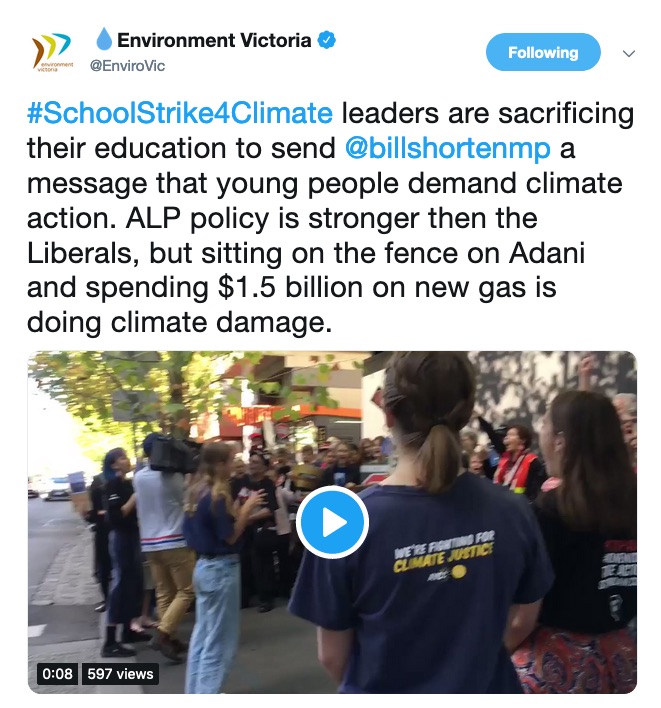 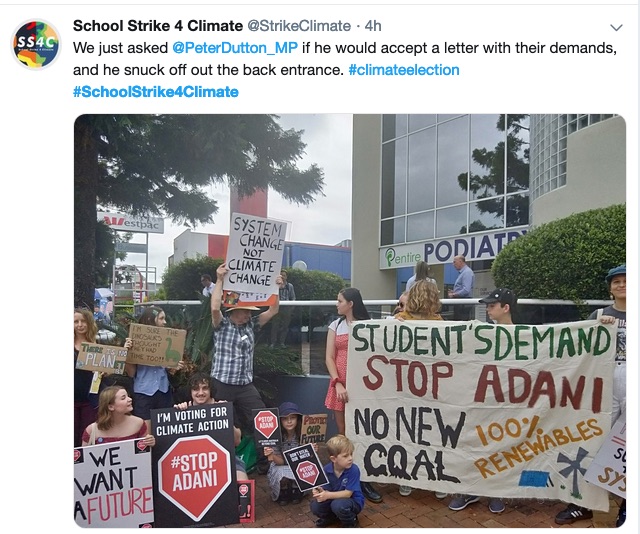 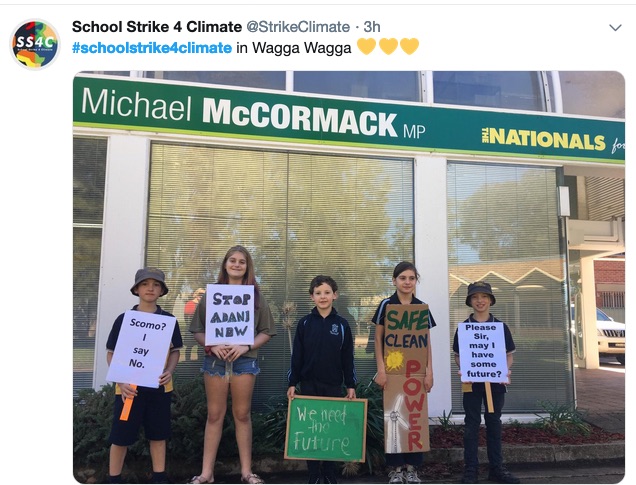 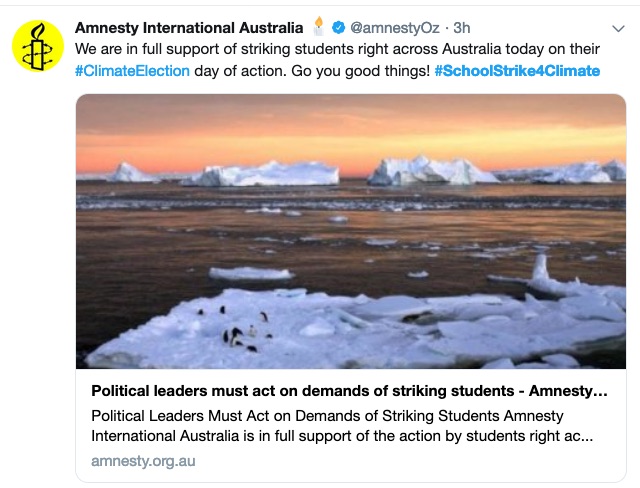 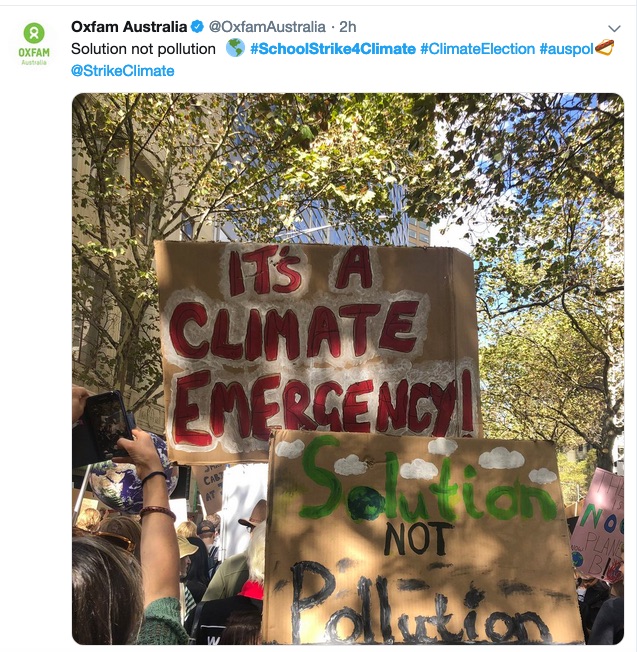 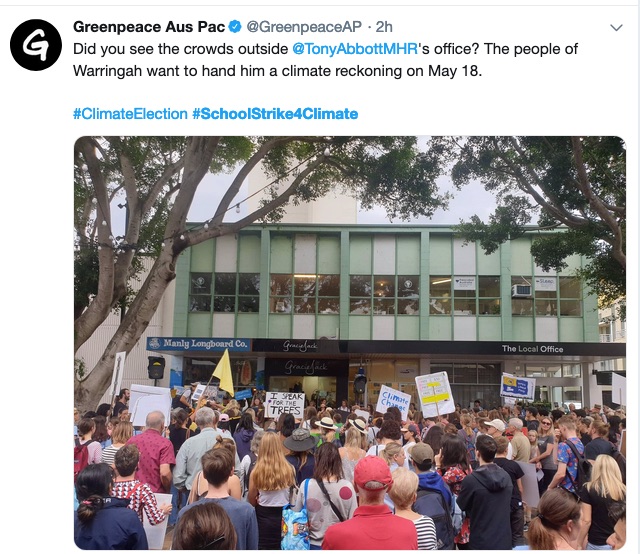 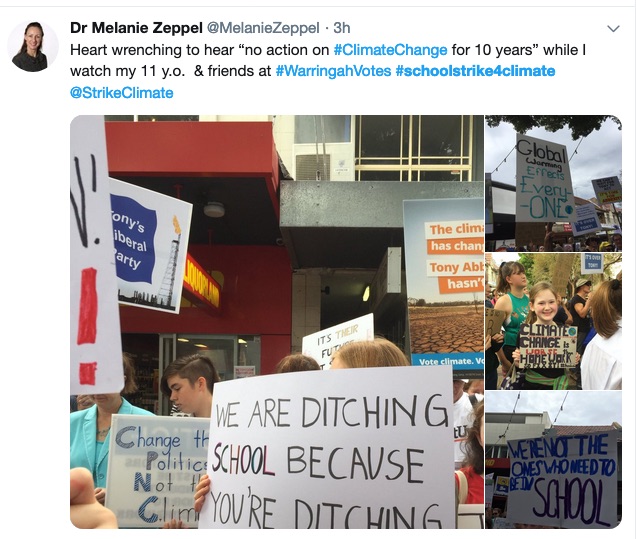