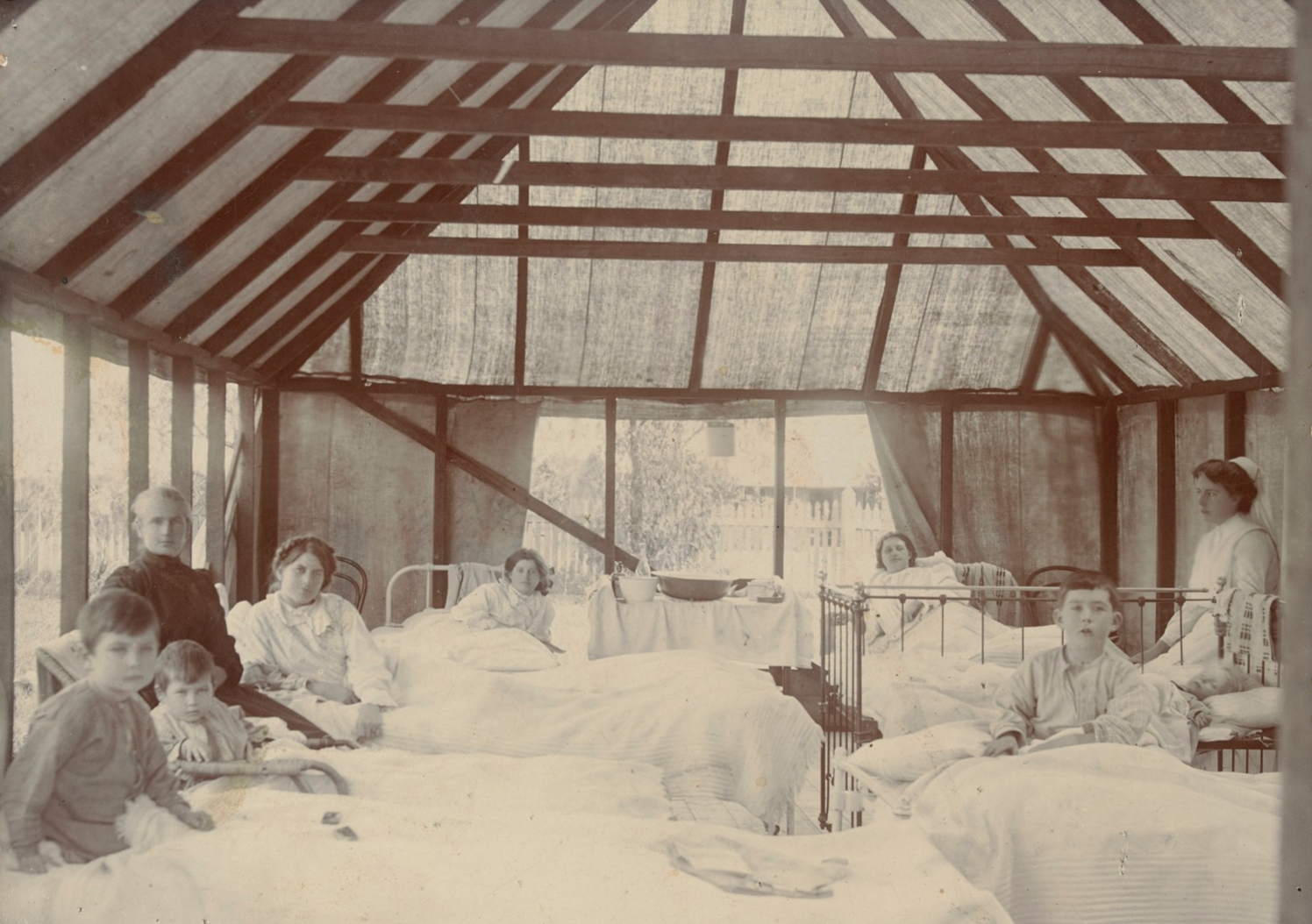 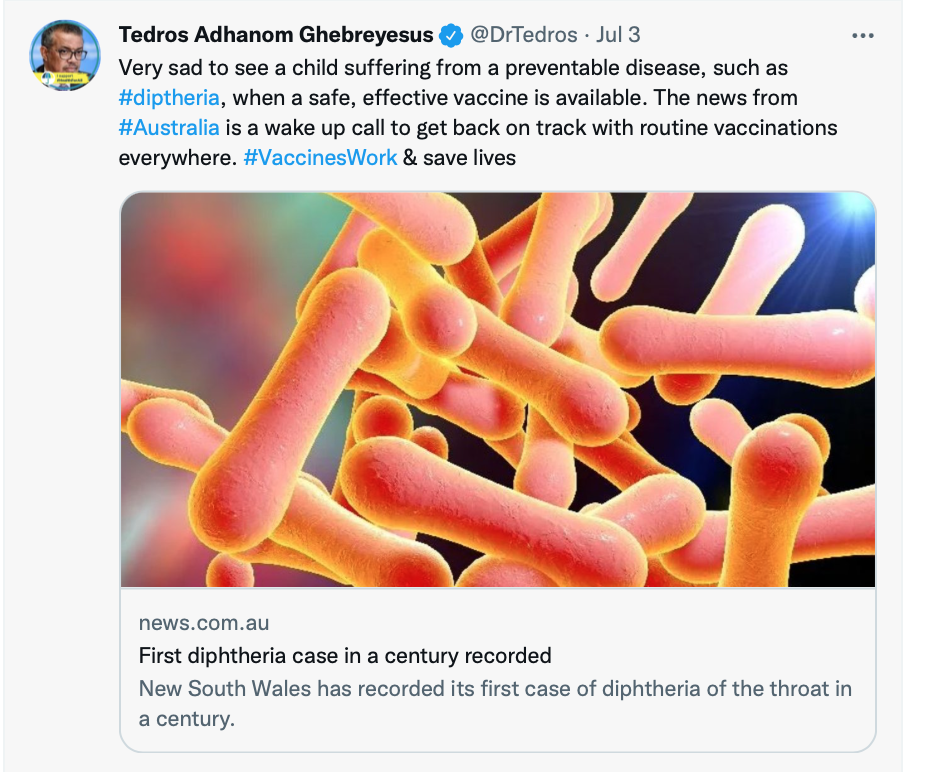 Below Associate Professor Frank Beard and Professor Kristine Macartney from the University of Sydney and Noni Winkler from the Australian National University provide a briefing on this potentially deadly disease and outline the important role of vaccinations in preventing its spread.

This piece originally appeared in The Conversation and is re-posted here with permission.

An unvaccinated toddler from the far north coast of New South Wales is in intensive care after catching respiratory diphtheria (diphtheria of the throat). A six-year-old close family contact is also infected.

These are the first cases of respiratory diphtheria in children seen in Australia since 1992.

What is diphtheria and how is it spread?

Diphtheria is a potentially deadly infection caused by toxins produced by certain strains of Corynebacterium bacteria.

Respiratory diphtheria causes severe swelling of the throat and neck, which can block the airway and cause breathing problems.

The bacterial toxin can also damage the heart, kidneys, brain and nerves. The bacteria can also cause skin sores, which are not as serious as respiratory diphtheria.

The diphtheria bacteria spread through respiratory droplets, for example, from coughing or sneezing. They can also spread through touching skin sores.

In Australia, vaccines containing diphtheria toxoid (an inactivated form of the toxin) are provided free on the National Immunisation Program (NIP), with three doses initially at two, four and six months of age.

These are six-in-one combination vaccines which also provide protection against pertussis (whooping cough), tetanus, polio, hepatitis B and Haemophilus influenzae type b (Hib) infection, which causes meningitis (inflammation of the lining of the brain) and septicaemia (blood poisoning).

Booster doses for diphtheria, tetanus and pertussis are provided under the National Immunisation Program at 18 months, four years and at around 12 years of age (through school-based immunisation programs). It’s important to get all these booster doses as immunity tends to decrease over time.

Adult boosters are also recommended but not funded by the National Immunisation Program.

Antibiotics are given to people with diphtheria but may not have much impact on the disease once established.

Specialised treatment with diphtheria antitoxin (DAT) is often required to counteract the effects of the toxin. DAT needs to be given early in the illness (within 48 hours).

However there are global shortages of DAT due to decreased production over recent decades.

Diphtheria was once among the top-ten causes of child death. There were more than 4,000 deaths from diphtheria in Australia between 1926 and 1935.

Diphtheria cases fell dramatically following the introduction of vaccines in the 1940s.

Why are cases emerging now?

Anyone unvaccinated against diphtheria is at risk of disease. Diphtheria vaccination rates in Australian children have been high at over 90% since 2000 and are currently around 95%.

People born before 2000 are more likely to be under-vaccinated, as vaccination rates were lower when they were growing up.

There is also a particular risk from travel to countries where diphtheria remains more common, including Southeast Asia, Papua New Guinea, states of the former Soviet Union and eastern European countries.

Diphtheria vaccination prevents disease but doesn’t fully prevent people carrying the bacteria in the back of their throat without symptoms. It is possible for fully vaccinated people to spread the bacteria to unvaccinated contacts, including when they return from overseas travel.

Increases in diphtheria are a now a real risk as vaccination rates have declined globally.

We are also at increased risk of other diseases, such as measles, now international travel has restarted. Measles cases have surged globally in part due to COVID pandemic-related disruption to routine immunisation programs in many parts of the world. UNICEF and the World Health Organization have warned of a perfect storm of conditions for measles outbreaks.

A recent measles case in a traveller was the first in Australia since March 2020.

Ensuring people of all ages are up-to-date with their vaccines is key.

Parents should ensure children get all their routine vaccinations on time – this will provide strong protection against serious diseases like diphtheria and measles.

People of all ages should also be up-to-date for vaccines, particularly if travelling overseas. Beyond childhood, the Australian Immunisation Handbook recommends a diphtheria vaccine booster dose for:

Ensuring support to low- and middle-income countries, particularly those in our region, to strengthen their immunisation programs, including via catch-up campaigns for measles and other vaccines, is also key to protecting us all.

See here for Croakey’s archive of stories on immunisation

PrevPreviousSharing vibrant, productive and creative journeys to improve kidney care for First Peoples
NextReporting back on our coverage of the Federal electionNext