The road to Closing the Gap may be turning a corner

Journalist John Thompson-Mills reports from the NACCHO Summit in Adelaide.

The three-day talkfest features dozens of seminars and discussions looking at Aboriginal health from all angles. In the words of NACCHO CEO Lisa Briggs, it’s an opportunity to “showcase the national, state and local best practices in the management of the health of Aboriginal and Torres Strait Islander People.”

The conference opened with a passionate speech by NACCHO Chair Justin Mohamed who outlined a 10-point plan for achieving a healthier future for Aboriginal and Torres Strait Islander people.

It’s a plan he says he’s been working on for 20 years since he started working as a junior with Rumbalara Medical Clinic in Shepparton.

This aim to improve health and life expectancy -a multi-generational issue – is all about community, because that’s where it comes from.

Rather than the often-used top down, prescriptive approach, NACCHO’s vision represents a collective effort, where the community drives the policy as opposed to reacting to it. 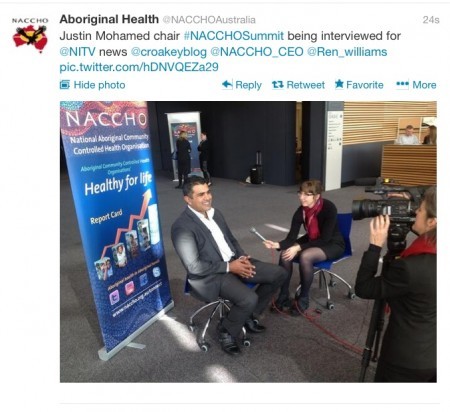 The 10-point plan is underpinned by the Close The Gap Statement statement of intent signed by governments and NGO’s.

The plan also follows Article 24 of the United Nations Declaration on the Rights of Indigenous Peoples, which ensures the right to the enjoyment of highest attainable standard of physical and mental health.

Above all though it’s about developing culturally appropriate services and providing employment to Aboriginal and Torres Strait Islander people in their own communities.

And that goal seems to be going superbly well if you consider the numbers in a recently released report.

Compiled by the Australian Institute of Health & Welfare, the report highlights the work done by Aboriginal Community Controlled Health Services.

And the numbers are impressive.

Three quarters of the health gains made have been against Close The Gap Targets.

Eighty percent of NACCHO members see more than 300,000 clients each year, which is basically half of our Indigenous population.

There were two million episodes of health care, a 100% increase since the last report was tabled four years ago.

NACCHO is also the largest single employer of Aboriginal and Torres Strait Islander people, (more than mining), in the country.

This has helped close-in on the targets set for Close the Gap 2030.

Over the same period, a 62% improvement in infant mortality.

The report also says that because of NACCHO, 84.2% of all Aboriginal and Torres Strait Islander babies are now born at normal birth weight.

Of course, Justin Mohamed isn’t saying the job is done, far from it.

Only that the “report card does confirm that the grass roots model of Aboriginal health in Aboriginal hands is the solution to closing the gap”.

“This is because we know our people, we understand the needs and we know how to treat our communities, families and individuals in a holistic way that will make a difference,” he says.

Day one of the NACCHO conference highlighted how much is being achieved by communities when they’re empowered to find solutions to their health issues.

Day one also highlighted the unheralded work of many in the most remote parts of the country.

Days two and three look like being much the same.

The road to closing the gap may finally have a corner in it.

For previous Croakey reports from the Summit

PrevPreviousWar on drugs: campaign against Pharmacy Guild PBS claims
NextWhat it takes to improve the lives of disabled people in remote communities: a case study from WarburtonNext