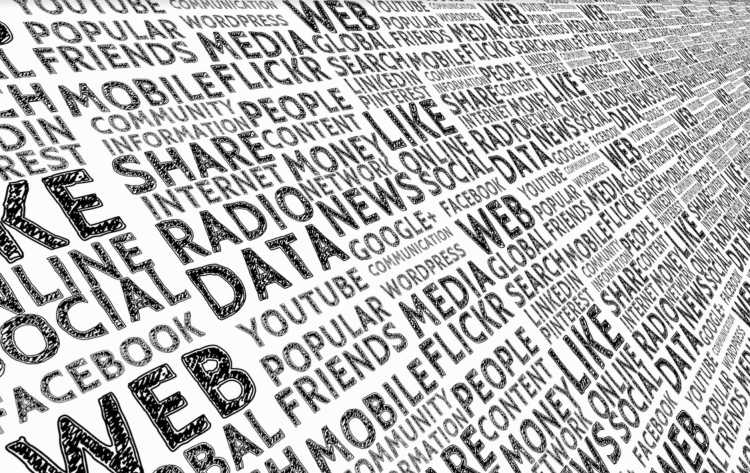 Introduction by Croakey: As of 6pm on 15 October 2020, former Prime Minister Kevin Rudd has 254 822 signatures on his petition to Royal Commission to ensure the strength and diversity of Australian news media. 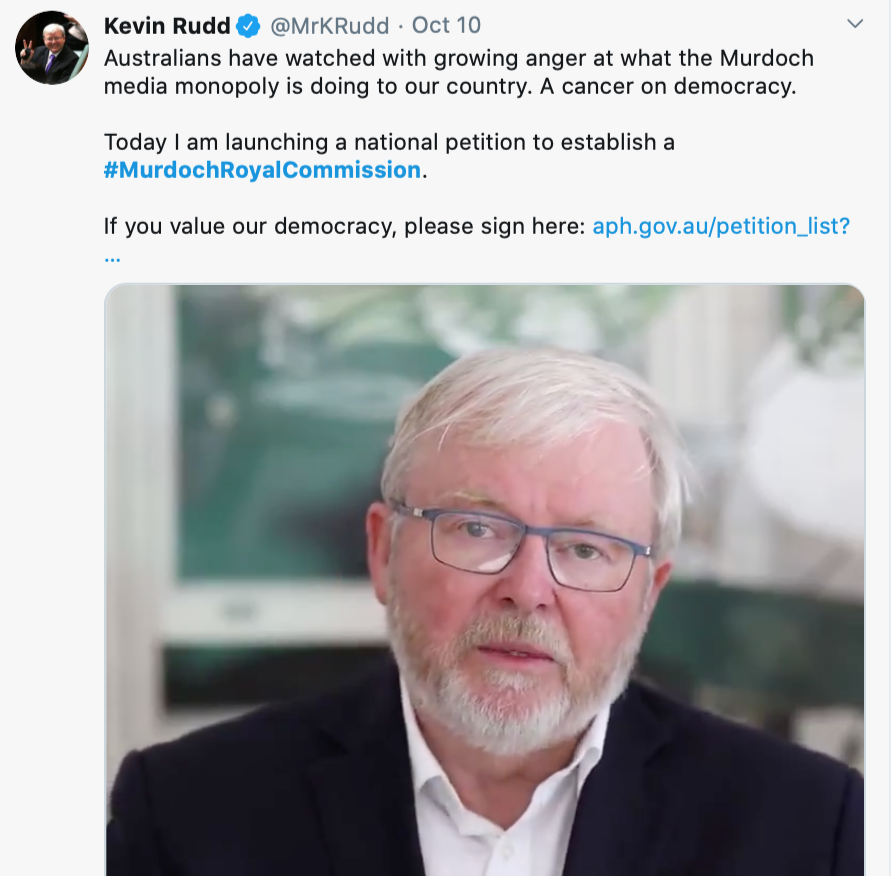 The petition focuses primarily on the dominance of News Corp in the Australian media landscape, echoing the concerns raised by other experts and media outlets about the implications this has for public debate and democratic processes in our country.

This issue is of current importance in the upcoming Queensland state election, a state where News Corp has a monopoly on commercial news media.

The petition also raises other issues relevant to media diversity and independence, including the influence of multinational media giants and the decline in funding for public broadcasting and regional media.

Below, Croakey editor Jennifer Doggett discusses some recent developments in these areas and highlights responses to the Rudd petition by experts and commentators.

In his petition ex-prime minister Rudd mentions a broad range of factors which have reduced the diversity and choice within the media landscape in Australia:

We are deeply concerned by: mass-sackings of news journalists; digital platforms impacting on media diversity and viability; Nine Entertainment’s takeover of the Melbourne Age and Sydney Morning Herald; News Corp’s acquisition (and then closure) of more than 200 smaller newspapers, undermining regional and local news; attempts to replace AAP Newswire with News Corp’s alternative; and relentless attacks on the ABC’s independence and funding.”

These issues have been previously raised by Croakey in reporting on international concerns about the market dominance of media giants such as Facebook and Google and the development of a mandatory code of conduct by the ACCC to address bargaining power imbalances between Australian news media businesses and digital platforms, specifically Google and Facebook.

Since this report, French courts have upheld an earlier decision to force Google to pay publishers for their use of new content, a move welcomed by the ACCC chair, Rod Sims, and chair of the Public Interest Journalism Initiative, Prof Allan Fels. 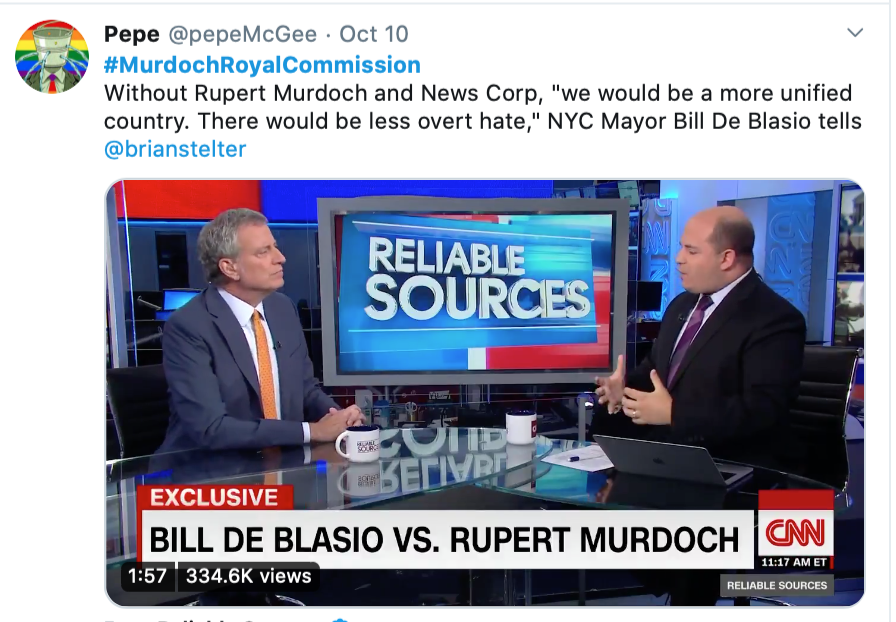 In a recent Twitter thread, Croakey’s managing editor Dr Melissa Sweet, highlighted some of the key findings of a new report from a US House of Representatives committee investigating the market dominance of Amazon, Apple, Facebook and Google.

These findings included that although the four corporations differed in important ways, studying their business practices revealed common problems:

First, each platform now serves as a gatekeeper over a key channel of distribution. By controlling access to markets, these giants can pick winners and losers throughout our economy..

They not only wield tremendous power, but they also abuse it by charging exorbitant fees, imposing oppressive contract terms, and extracting valuable data from the people and businesses that rely on them.

Second, each platform uses its gatekeeper position to maintain its market power. By controlling the infrastructure of the digital age, they have surveilled other businesses to identify potential rivals, and have ultimately bought out, copied, or cut off their competitive threats.

…these firms have abused their role as intermediaries to further entrench and expand their dominance. Whether through self-preferencing, predatory pricing, or exclusionary conduct, the dominant platforms have exploited their power in order to become even more dominant.

The effects of this significant and durable market power are costly…significant evidence that these firms wield their dominance in ways that erode entrepreneurship, degrade Americans privacy online, and undermine the vibrancy of the free and diverse press.

The result is less innovation, fewer choices for consumers, and a weakened democracy.”

Attacks on the ABC

Croakey has also raised the ongoing attacks on the ABC by the Coalition government, including erosion of staff, services and programs, despite the crucial role it has played in providing information to the public during the 2019/20 bushfires and the COVID-19 pandemic.

The lack of support for public broadcasting was also noted in a statement from the Media, Entertainment and Arts Alliance (MEAA) in response to the 2020/21 Federal Budget:

..there was no extra funding in tonight’s Budget for our public broadcasters, despite the extraordinary job they have done in keeping the nation informed throughout a year defined by devastating bushfires and the pandemic. The cuts to the ABC began in 2014 and by 2022 will total more than $780 million. It is hard to see how the ABC can carry on without making further, damaging cuts to its workforce and the services it offers.”

The MEAA also pointed out the lack of support for public interest journalism in the Budget:

It is disappointing that the government has made no commitment tonight to support journalism by extending its Public Interest Newsgathering fund beyond the current financial year and make it a recurrent fund. At a time when journalism is under even greater pressure from reduced revenue caused by COVID, this support is sorely needed. “

What would a royal commission achieve?

Given these significant challenges to media independence and diversity in Australia, is it realistic to expect that Rudd’s proposal would achieve any substantial outcomes?

Denis Muller, Senior Research Fellow at the Centre for Advancing Journalism, University of Melbourne, argued in The Conversation that a royal commission would have some benefits:

“The benefit of a royal commission would be to lay bare the nature of the interactions between the elected politicians and the unelected Rupert Murdoch,” he said.

“Details of the supplications, threats, deals, promises, attitudes and motives that are the stuff of these interactions would shed extraordinarily valuable light on a highly influential aspect of the way Australia’s democracy works,” added Muller.

“It would enable the public to assess just how extensive Murdoch’s influence is, and what effect it has on public policy and electoral outcomes.”

However, he cautioned against seeing this as delivering policy changes which would change the media landscape significantly:

“It’s highly improbable it would lead to greater diversity in media ownership. If it created a public clamour loud enough to make politicians think there were votes in it, then it might be possible one of the main parties would adopt media diversity as policy, and propose ways to achieve it,” he said.

He also points out that both sides of politics share some responsibility for the high concentration of media ownership in Australia:

In Australia, both main parties have been complicit in creating the present state of affairs.

The Hawke-Keating government created the conditions that allowed Murdoch to take over the Herald and Weekly Times group, giving him Melbourne’s Herald Sun and daily newspaper monopolies in Brisbane, Adelaide and Hobart.

The Turnbull government made the situation worse in 2017 by abolishing rules about cross-ownership, market dominance and audience reach.”

Muller concludes that Australia’s political leaders see the Murdoch media as essential to their electoral success. This means that even if a royal commission gets up, its findings are likely to be ignored by governments. 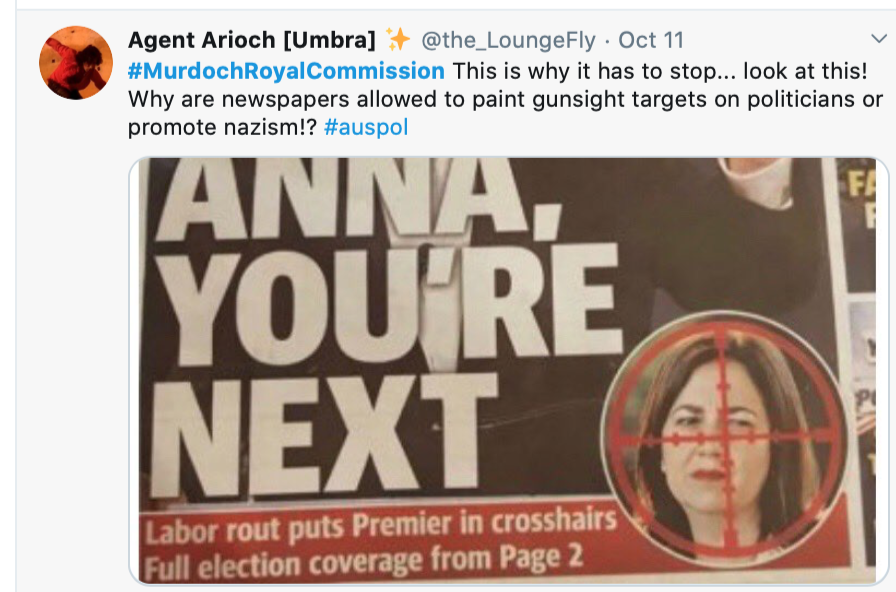 PrevPreviousInvesting in community to protect mental health
NextThe Health Wrap: misinformation, pregnancy and birth, disability, access to healthcare, and the importance of leechesNext