Introduction by Croakey: With the final US military transport aircraft having lifted off from Kabul airport, the Afghan Australian Advocacy Network (AAAN) is urging the Federal Government to go way beyond its promise to provide humanitarian visas for at least 3,000 Afghans over the coming year, saying it has a “moral imperative” to bring Afghans to safety.

The AAAN, which represents refugees who have settled in Australia from Afghanistan, are urgently calling — including via a petition — on Australia “to take urgent concrete steps to support the Afghan people who, having faced suffering, war, injustice and ongoing trauma, are now facing an imminent humanitarian crisis with the violent Taliban takeover of Afghanistan”.

Among a number of urgent asks, it is calling for an additional humanitarian intake of at least 20,000 places, which prioritises “the most vulnerable persecuted people of Afghanistan, including women, minority groups, LGBTIQA+, human rights defenders, interpreters, guides, and other personnel involved in Australia’s mission in Afghanistan”.

It also says Australia should grant permanent protection to the 4,200+ refugees from Afghanistan on temporary protection visas here, and enable greater family reunion.

More than 300 businesses, church and community groups have signed on to another joint letter urging seven practical steps that Australia can take to provide safety for people from Afghanistan and to show leadership on the global stage.

In a statement led by the Refugee Council of Australia, they welcomed the Federal Government’s extension of temporary visas for people from Afghanistan in Australia but said “there is a lot more that needs to be done for people at grave risk”.

The calls come as long-term refugee advocate Paris Aristotle, the co-head of Australia’s newly formed Advisory Panel on Australia’s Resettlement of Afghan Nationals, warned of the need for unprecedented support for incoming Afghan refugees, saying Australia had “never had to settle people out of a crisis into a pandemic before”.

Speaking on ABC RN Breakfast, Aristotle said quarantine for those arriving as part of last-ditch evacuation efforts in recent days and weeks would “come on top of having to escape in very dangerous and chaotic circumstances”, with lockdowns also disrupting settlement efforts.

The devastating end to the 20 year conflict, in which Australia has played a significant role, has left many Australians wanting to provide humanitarian support for those at grave risk under the rule of the Taliban.

The article below, from academics Associate Professor Mary Anne Kenny, Associate Professor Caroline Fleay and Professor Nicholas Procter, and Ali Reza Yunespour, also a member of the Advisory Panel of Afghan Nationals, outlines a number of practical ways to help, including by supporting the AAAN petition.

It was originally published at The Conversation.

The situation in Afghanistan is rapidly unfolding as a humanitarian crisis. We are seeing images and stories of violence and despair on a daily, sometimes even an hourly basis.

If you are looking at practical ways to help, here are some suggestions to support refugees from Afghanistan locally, nationally, and internationally.

One option is to support what many Australians from Afghanistan are calling for.

The Afghan Australian Advocacy Network, made up of a diverse range of ethnic and religious groups from Afghanistan, wants the federal government to increase our humanitarian intake, grant permanent protection to people from Afghanistan in Australia on temporary visas and prioritise family reunions.

An easy first step is to support and share the Afghan Australian Advocacy Network’s petition, which currently has more than 140,000 signatures.

Another option is to write to federal members of parliament and ask them to support of these actions. When you write to your local federal MP, ask to meet with them to discuss your concerns. 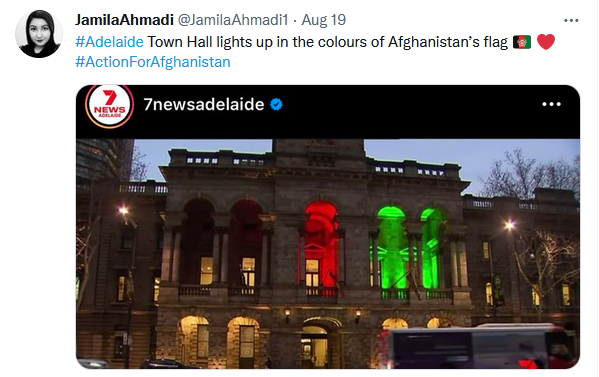 Approach your state, territory and local governments. Ask them to demonstrate acts of solidarity such as providing additional quarantine places, follow the South Australian parliament’s lead to pass a motion supporting refugees from Afghanistan or lighting up public buildings.

There are many local, national and international organisations working with refugee communities from Afghanistan.

While many people want to donate goods, most agencies prefer a financial donation as agencies are able to work with communities and find out what they need.

War artist Ben Quilty has taken matters into his own hands, and is appealing for funds for the United Nations High Commissioner for Refugees (UNHCR). 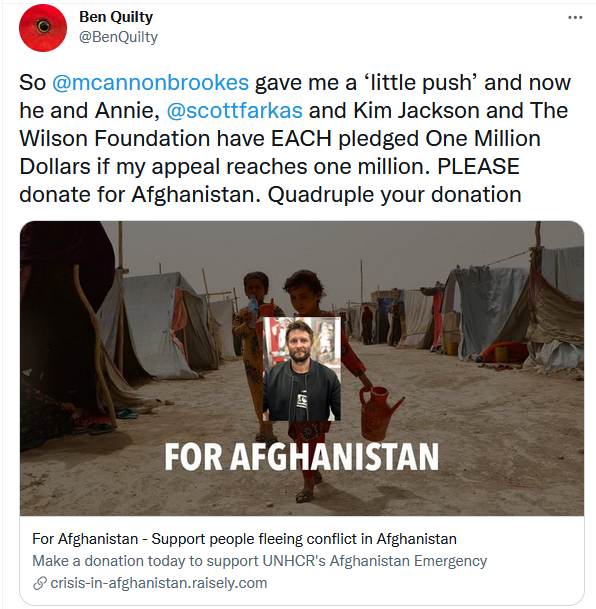 Apart from the UNHCR, some other established organisations supplying practical things like food, water and supplies in Afghanistan are the Australian Red Cross and UNICEF Australia.

The Emergency Action Alliance is also running a crisis response for Afghanistan. This group is made up of 16 Australian-based charities, including Oxfam, World Vision and Save the Children.

People in each state can donate or volunteer with local organisations to support their work with refugees.

Help for refugees in the community

If you or someone you know is seeking information for their family or friends in difficulty in Afghanistan, their priority will be trying to access legal advice or assistance.

The Asylum Seeker Resource Centre has a list of legal resources. Refugee Legal in Melbourne also have a hotline for people impacted by the crisis in Afghanistan.

Read more: There’s a way to get refugees out of Afghanistan after this week’s deadline — if the Taliban agrees

Foundation House (a Victorian organisation for torture survivors) has basic information about visas and mental health support in English and Dari. The Refugee Council of Australia has a comprehensive list of services, including legal and financial support to refugees, all around Australia.

Legal services, advocates and advisers are experiencing a huge increase in demand and are working at capacity. So, another practical way you can help here is to donate to a refugee community legal centre in your state or territory.

How to provide emotional support

People from refugee backgrounds are likely to be highly distressed by the crisis in Afghanistan. Distress can come and go in waves.

The Australian Torture and Trauma network has useful tips on how to respond in a compassion first, trauma-informed way. This includes: listening and acknowledging feelings, resisting the urge to offer quick solutions and encouraging people to take breaks from the media coverage.

Own a business? Sponsor a refugee

An organisation called Talent Beyond Boundaries helps connect businesses to people with skills who are displaced.

It uses visa programs in Australia, Canada and the United Kingdom to help employers gain a talented refugee while also bringing them to safety.

Employers can get in touch direct and the organisation also takes tax-deductible donations.

PrevPreviousOpening up when 80 percent of eligible adults are vaccinated won’t be ‘safe’ for all Australians
NextParents, some good news. Your teens can get the jab.Next