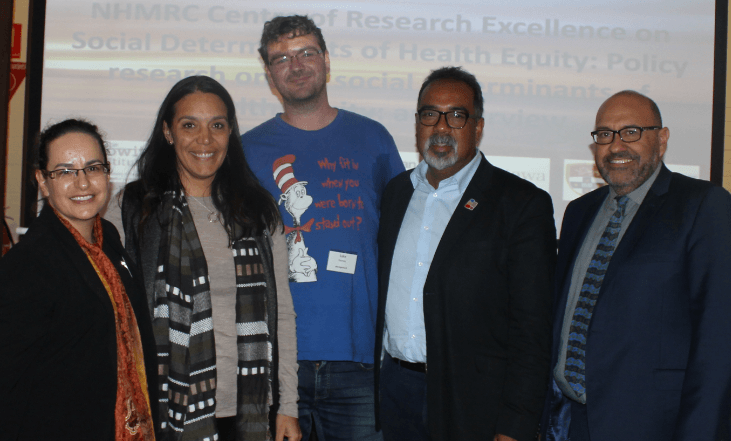 “The sky won’t fall in if we stop being racist!” Timely reflections on the impact of systemic racism

“Change can be uncomfortable, but change away from systemic racism and towards reconciliation is necessary.”

In the post below, Emma George and Tamara Mackean from the Southgate Institute for Health, Society and Equity at Flinders University discuss the impact of systemic racism, the challenges of living in a society in which racism is invisible to the majority and how we can move forward.

Their reflections emerge from a panel discussion on the impact of systemic racism at a recent policy forum in Canberra presented by the NHMRC Centre for Research Excellence in the Social Determinants of Health Equity (CRE-SDHE). The post is the second of a three part series on the forum being published at Croakey.

The issues they raise are, of course, relevant to concerns about the return of Pauline Hanson’s One Nation to national politics and how best to ensure the makeup of the new Senate does not amplify racism and hatred. See more at the bottom of the post.

The prevalence of systemic racism in Australia is not up for debate. We see it in all sectors: health, education, housing, criminal justice, sport and more. The Centre for Research Excellence on Social Determinants and Health Equity (CRE Health Equity) recent National Policy Forum included a panel discussion on the impact of systemic racism.

The conversation highlighted the impact of systemic racism, and the challenges of living in a society in which racism is invisible to the majority. Change to make the invisible visible is necessary.

In the words of Luke Pearson “the sky won’t fall in if you stop being racist”.

Following the CRE:SDHE policy forum, I sat down with Tamara Mackean to chat about what was shared by the panel on systemic racism.

Q: Some racism is personal and obvious. Systemic racism is intangible and can be hard to identity. How would you describe the impact of systemic racism?

Tamara Mackean: Systemic racism results in bad health outcomes. People die because the system doesn’t allow the proper assessment and management of their health and wellbeing issues. It is devastating. Aboriginal people are traumatised with ongoing grief and loss because the system fails them. It impacts individual patients but also on staff in the health system. There are people trying to do their best and stand up to injustices but they’re beaten down. The trauma is not just worn by Aboriginal people, it impacts all of us.

Q: How do we move forward to address systemic racism?

Tamara Mackean : We can’t continue to deny the prevalence of systemic racism. There is a change in the discourse to at least engage at some level with these difficult issues. These conversations open pathways for healing. Many of things that were discussed at the CRE Health Equity panel lie at the heart of reconciliation, particularly when it comes to responsible leadership and creating change. Reconciliation should reset the relationship and promote the re-establishing of power dynamics. Society is out of sync – reconciliation addresses systemic racism and can bring us back into balance.

Q: Panel members shared their hope for reconciliation. How important is hope in the context of healing?

Tamara Mackean : Surely as a collective society we want to present ourselves as a healthy hopeful peoples. Hope says we have a belief in ourselves with aspirations and inspirations. If we think about hope as part of the healing process, and compare it to a very basic physiological approach to healing, then we know there has to be flow. If you cut your skin, your body commences healing, and the way it does that is through blood flow in the system. Blood delivers platelets, which coagulate or clot, and a scab forms to allow the body to heal. Infection fighting white blood cells protect the wound while new skin begins to form. Healing happens in response to flow.  That’s what the ‘Dinner Table Challenge’ is about – it’s creating the flow of conversation about difficult things so that’s a society we can have hope.

Question: In the CRE panel discussion, you challenged us to take up the ‘Dinner Table Challenge’, can you tell me more about this?

Although we are talking about systemic racism, individuals make up a system. The ‘dinner table challenge’ generates little conversations among people about difficult issues so that the conversation starts to get a roll on. People are challenged to think differently. It’s not about arguments, but it might start people have debates. It’s not to be provocative or nasty, but to really get us as individual human beings to think more deeply about the fact that we are not isolated from each other – we are all connected. Communication will allow different thoughts, feelings and ideas to flow into the space. The ‘Dinner Table Challenge’ is a conversation space for people to interact and begin to see the world differently.

These reflections highlight the impact of systemic racism, but an important message from the CRE Health Equity Panel is that there is hope for healing and reconciled future. Change can be uncomfortable, but change away from systemic racism and towards reconciliation is necessary. Luke Pearson is right, the sky won’t fall in if we stop being racist!

Dr Tamara Mackean is a Senior Resarch Fellow, Indigenous Health, at the Southgate Institute for Health, Society and Equity.

Emma George is a PhD Student at the Southgate Institute for Health, Society and Equity.

On the need for safe and respectful politics

There is much concern about the return of Pauline Hanson to the national spotlight, particularly among Muslim Australians, who rate as her current major targets with a range of policies including a call to stop further Muslim immigration and the intake of Muslim refugees.

But her return also brings back painful memories and new fears (her policies include wanting to “abolish” multiculturalism and the Racial Discrimination Act) for those who were in her sights 20 years ago – Aboriginal and Torres Strait Islanders and Asian Australians, including Professor Megan Davis,  Chair of the UN’s permanent forum on Indigenous issues (see her tweet, below).

This article by journalist Margo Kingston – headed ‘Pauline Hanson takes centre stage again but this time we should listen not lampoon‘, and similar sentiments from Guardian Australia’s Katharine Murphy also sparked distress and anger on social media that calls to listen to Hanson and her supporters can deliver licence for racism and bigotry.

The elites v Pauline Hanson. We don’t have to choose one or the other – we can reject both: Jeff Sparrow

Race Discrimination Commissioner Tim Soutphommasane, who told the ABC he recalled feeling unwelcome 20 years ago when Hanson was warning of Australia being “swamped” by Asians, said in this Fairfax opinion piece that it is important that we are able to have debates about multiculturalism and immigration.

In a democracy, no issue is ever beyond discussion.

But he warned we should not be apologetic about responding to ignorance or nastiness.

Indeed, calling out racism or bigotry doesn’t mean that you are preventing someone from having an opinion. It just means that you are holding them to account for what they say. If people don’t want to be called a racist or a bigot, they can start by not expressing a racist or bigoted opinion.

Here’s hoping our incoming government can look to what the evidence tells us can work on how to genuinely address disadvantage and disempowerment without letting fearmongers off the leash and causing further harm to those already subject to bigotry and discrimination.

See some stories covered in the past at Croakey on addressing racism and the costs to health and wellbeing of not doing so.