The story of the Broken Hill Table Tennis Club – as told at the National Rural Health Conference in Adelaide this week – tells us something about how the social and economic fortunes of mining towns can rise and fall, with wide-ranging implications for health.

During its heyday, the Broken Hill Table Tennis Club had 400 members. They had the means to invest in a high-tech machine that fired out balls for members’ practice. The club also managed to produce not one but two NSW State table tennis champions.

The mining town in far western NSW went from boom to bust. Per capita income fell from one of the highest in the state to one of the lowest.

And the table tennis club also suffered. At one stage, membership plummeted to just four.

This fall from grace was at least partly attributed to the town’s rapidly shrinking population, now 40 percent smaller than at its peak.

In an obscure location, the table tennis club remained largely out of sight and apparently out of mind, with many visitors and new residents not even knowing of its existence.

With considerable experience in health promotion, Steve Burton was seen by some to be the perfect ‘Mr Fix-It’, and so he was invited to spearhead a new model to promote sports in Broken Hill. 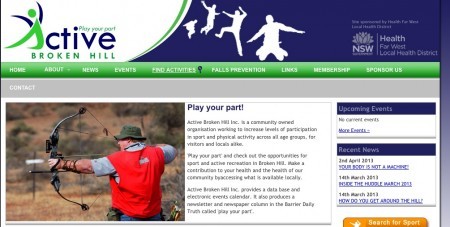 Physical activity is also promoted via a regular feature in the local newspaper ‘Barrier Daily Truth’ with a column called ‘Play Your Part’, and a newsletter ‘Inside the Huddle’, which is distributed to sporting groups.

Sporting goods drives arrange for donated sporting goods to be sold at low cost to families who otherwise could not afford such equipment.

According to Steve, many challenges remain, including funding and community buy-in. Steve and his team expect it may take several years to achieve real cultural change.

“Active in the outback”, a session explaining the story of Active Broken Hill, was just one of many presentations to the conference about efforts to promote healthy lifestyles in the bush and to address the social determinants of health.

Joining Steve for the six-hour drive from Broken Hill to Adelaide, and co-presenting the paper, was Hannah Licul, a Broken Hill local who currently works as a pharmacy assistant and also sits on the Active Broken Hill management committee.

Hannah has won a Des Murray Scholarship, which is awarded to a young person from a remote area who is committed to improving the health of their community and who has demonstrated the ability to be an advocate for the young people of their region.

That Hannah was a 2013 recipient suggests that physical activity in Broken Hill has a bright future.

PS From Croakey: And in case you’re wondering, this article shows that table tennis is back in swing in Broken Hill.

The Health Wrap: from the arts to the Olympics, some deep diving

The Health Wrap: on grief, sleep, mental health and much more

Wrapping tweets and news from RANZCP2021