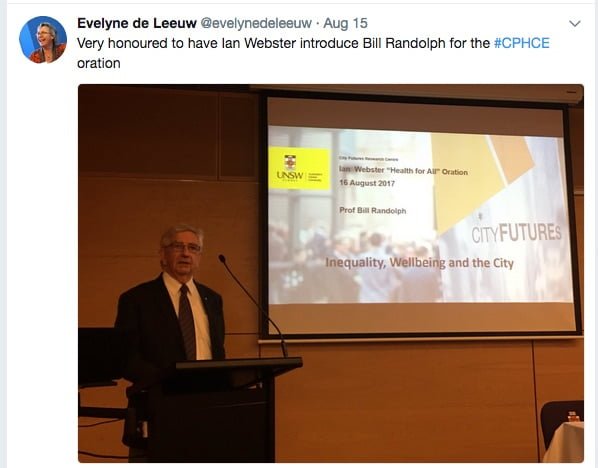 The “suburbanisation of disadvantage”: a critical concern for public health and planning sectors

The suburban dream has turned into something of a nightmare, as growing inequality and the concentration of disadvantage in the suburbs have become critical health concerns that warrant public health policy intervention, a conference in Sydney has been told.

Speakers at the annual forum of the UNSW Centre for Primary Health Care and Equity (CPHCE) made a strong argument for injecting health equity considerations into urban planning, reports Amy Coopes for the Croakey Conference News Service.

(Read her preview of the forum here).

A dramatic “suburbanisation of disadvantage” has occurred in Australia, as the widening gulf between rich and poor reveals a stark spatial and geographic dimension to inequality and health, a forum heard in Sydney last week.

The unique event, run by the UNSW Centre for Primary Health Care and Equity (CPHCE), explored the idea of “health environments”, bringing together urban planners and health professionals to discuss the intersection of these two disciplines.

Headlined with a keynote address on Inequality, Wellbeing and the City, delivered by UNSW City Futures Centre director, Professor Bill Randolph, the program ranged across topics including Sydney’s Green Square residential mega development, the arrival of capitalism to the remote Himalayan kingdom of Bhutan, and a “healthy airports” push for Sydney’s new terminal at Badgerys Creek.

It was a phenomenon that had now touched the furthest reaches of the globe, was accelerating – with 66 percent of the world’s population to live in cities by 2050 – and had significant implications for health.

Fittingly, given the historic and ongoing impacts to First Nations people of this process, the forum commenced with Muruwari man Mathew Doyle performing a healing song on the yidaki as part of his Welcome to Country.

Though not immediately thought of as sister disciplines, Randolph said urban planning and public health had shared origins (Edwin Chadwick and John Snow) and – after a post-war period of divergence – were dovetailing once more. 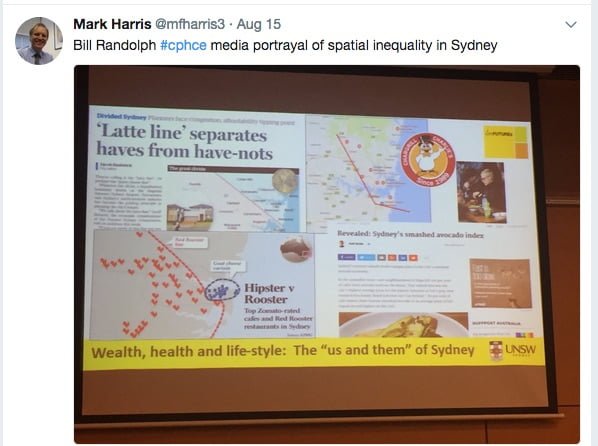 Sir Michael Marmot had demonstrated an explicit link between inequality and health, with the latter spatially determined and correlated, and Randolph said his own work had shown distinct correlations between geography, disadvantage and wellbeing.

“Rising inequality does not take space in a geographic vacuum,” said Randolph.

Australia had seen what he described as the “suburbanisation of disadvantage”, where lower income groups had been squeezed out of the inner city by income polarisation, and the private rental market – not social housing – was a key driver.

The media described this effect as – variously – the “latte line”, the “Red Rooster line”, the “goats cheese curtain” or the “smashed avocado index”, but Randolph said there were serious consequences underlying this “us and them” rhetoric, including real divides in educational outcomes, active transport or access to healthy food.

“Urban sprawl has not brought better lives for many, and health is just one dimension,” said Randolph, citing a growing gap between rhetoric and its delivery.

“Who you are and what you can afford are critical questions in whether you benefit.”

Obesity and problematic alcohol consumption were “suburban crises”, while self-assessed wellbeing was almost perfectly negatively correlated with private health insurance status (in and of itself a luxury of those with higher incomes), he said. 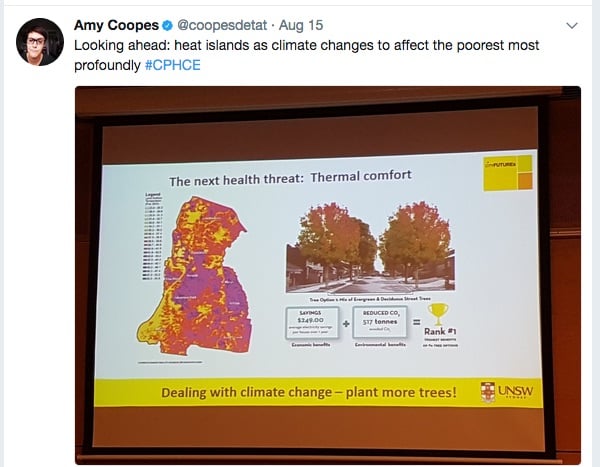 A three-year project looking at some of the most disadvantaged SEIFA deciles in Sydney and Melbourne had revealed less than 20 percent were just making ends meet, while more than five percent were in “deep poverty”, having to skip meals, leave their homes unheated or cooled and pawn belongings for cash.

This was occurring against a backdrop where the top 20 percent of Australians now earned half the country’s income and held 62 percent of its wealth, while a new precariat was emerging without job security or a safety net.

The decentralisation of disadvantage meant poorer groups were segregated from jobs and services, and either could not afford or were curtailed in their ability to travel due to lack of transport infrastructure.

Women were especially vulnerable due to the “spatial leash” effect, said Randolph, also pointing to an emerging “Generation Rent” locked out of the property market.

From a service provision perspective, the scattering of those most in need over a vast geographic area was a challenge, and Randolph said he wasn’t optimistic about the future given planning and renewal remained focused on the inner city.

(See our interview with Bill Randolph on his CPHCE keynote here).

There was also significant diversity between disadvantaged areas, with implications for policy, and need for a sensible debate on a settlement strategy on where people “ought to or could live”, he added.

Eamon Waterford, from the Committee for Sydney, said sprawl was a significant issue for the city with enormous implications for health, yet was a “major conversation nobody wants to have”. 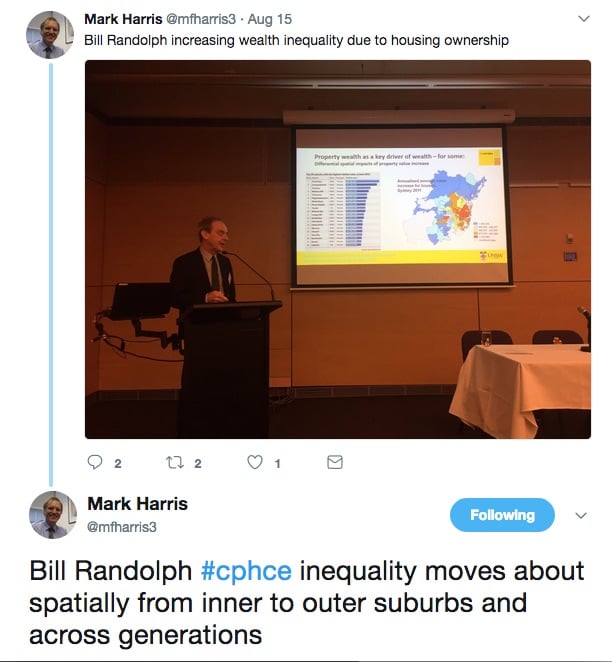 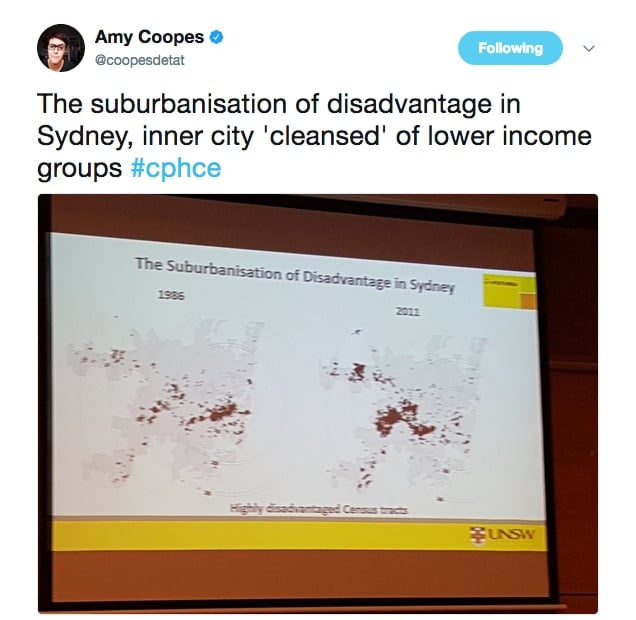 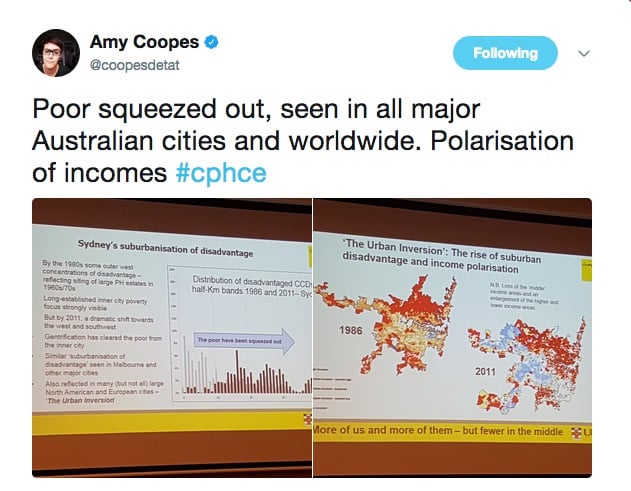 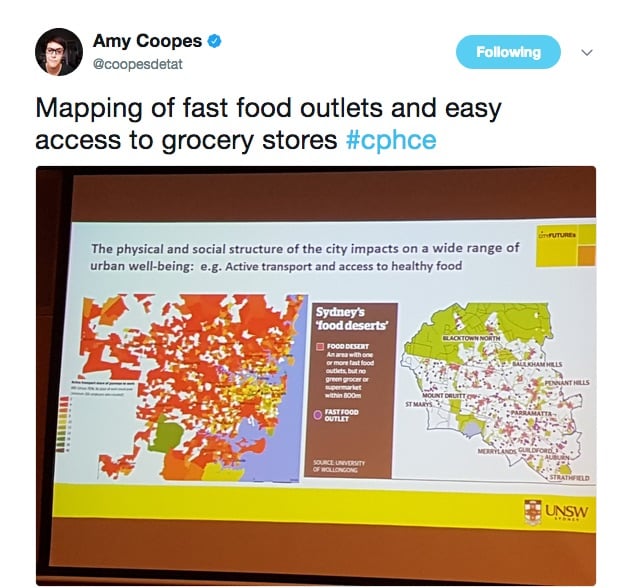 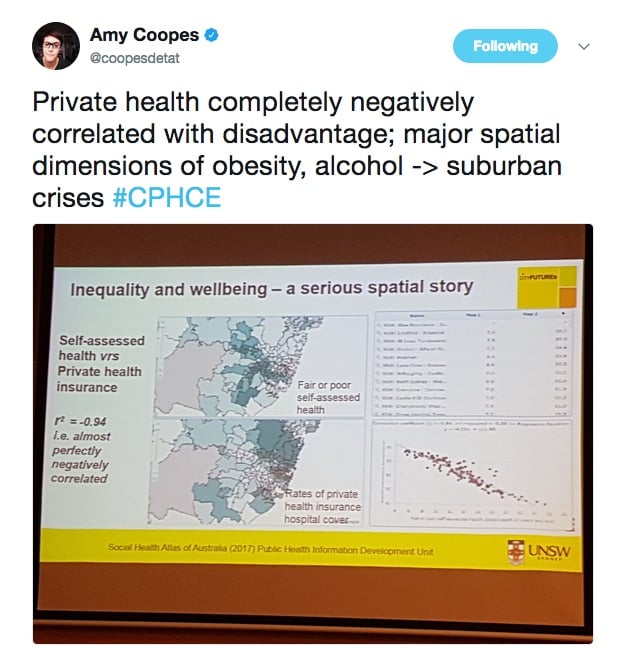 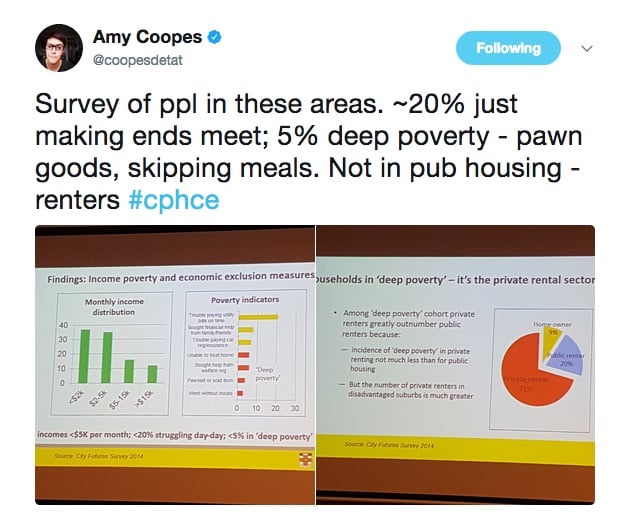 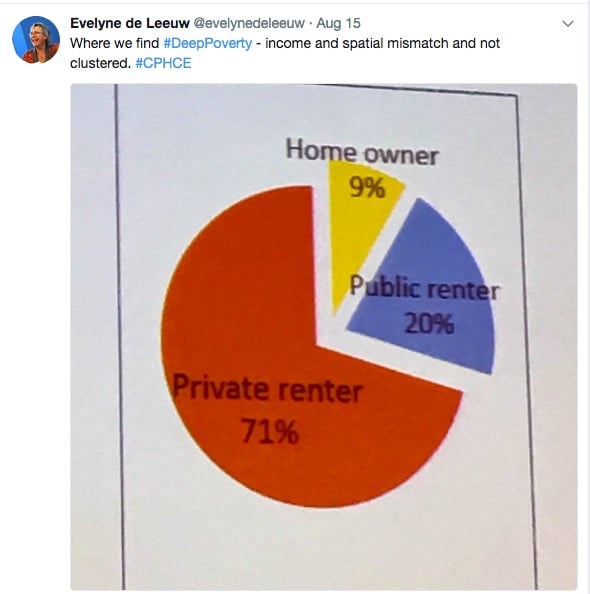 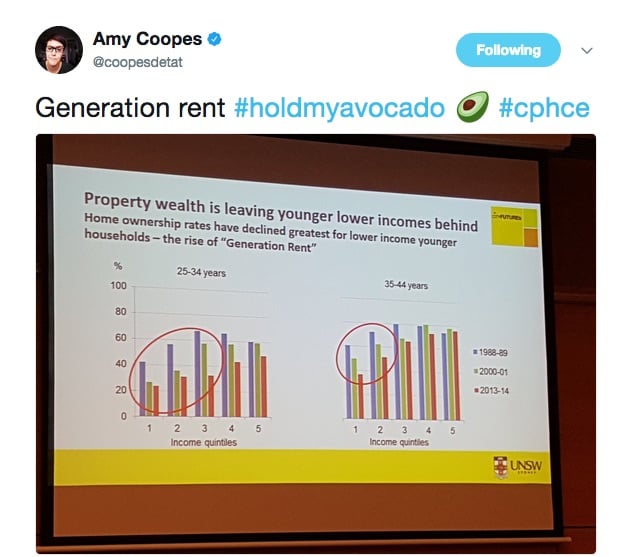 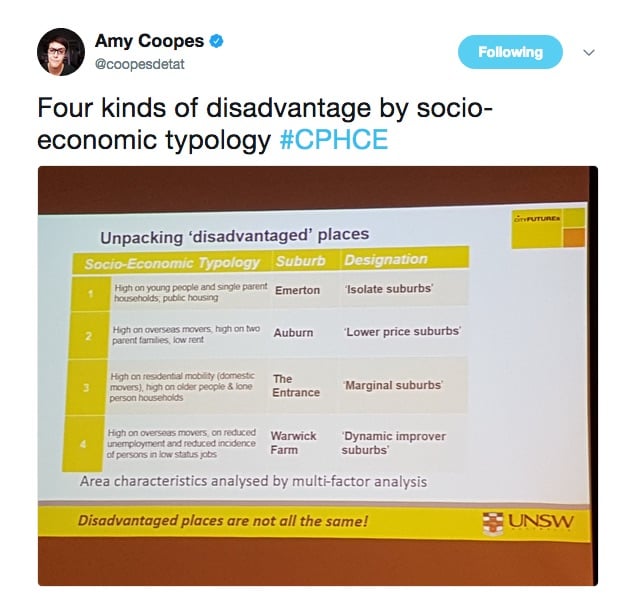 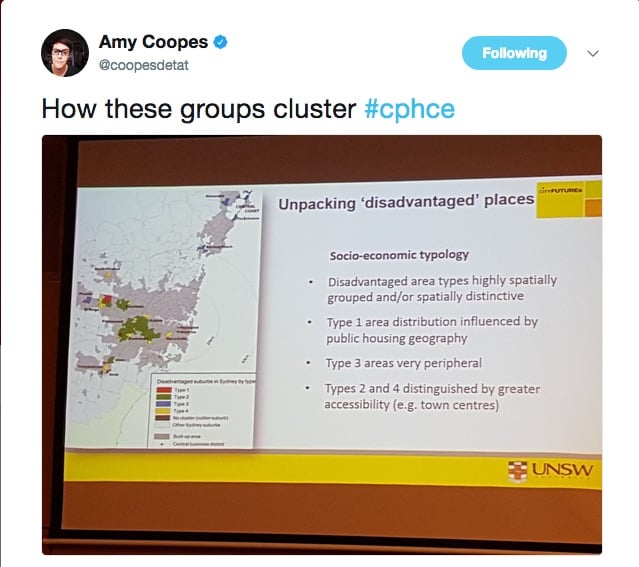 With Sydney in the grips of high-rise construction fever, there were real questions about quality of life and implications for health, the forum heard.

Allison Heller, Manager Social Strategy at the City of Sydney, said there was such a thing as “density done well”, delivering amenity, walkability and proximity. 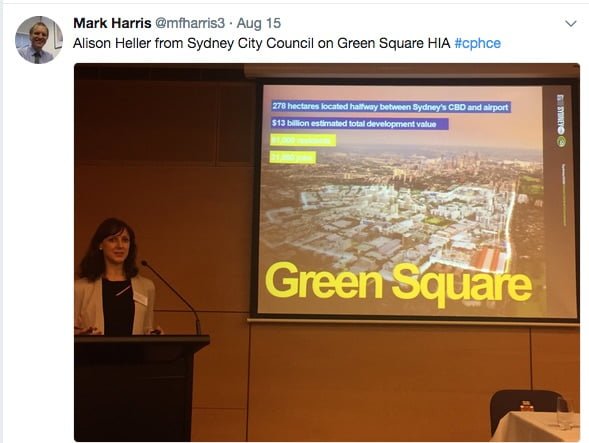 But living on major roads and traffic routes was a concern for health, as was ensuring people experience community and connectedness and that children and families were provided for, she explained.

The City had engaged CPHCE to conduct a health impact assessment on the draft infrastructure strategy and plan at Green Square, a 61,000-resident, 278 hectare, $13 billion mega development between Sydney’s CBD and airport, and Australia’s largest urban renewal area.

Presenting on the latter, Associate Professor Jane Lloyd, from HERDU, said “child-blind planning” meant the needs of young people and their families were all too often overlooked in high-density developments.

By 2030, 7,000 children are expected to be living in Green Square, and Lloyd said the first three years were critical for social, emotional and cognitive development, school readiness and health outcomes.

Seemingly simple things had been found to make a big difference in raising a child in high-rise environments, including ample space, storage, soundproofing and outdoor play areas.

Lloyd identified two kinds of risks for children in Green Square – those in the external environment (limited access to physical activity and walking, exposure to roads, no local primary school), and those in the internal environment (suppression of expression and exploration due to fears about noise, burns and injuries due to poorer maintenance standards in private rental properties).

Young families in rental properties, those with language barriers (with a large Mandarin-speaking population projected) and those with children with a disability were most at risk

To mitigate these risks, HERDU had made a number of recommendations to the City of Sydney, including construction of a local school within walking distance, local daycares with multilingual staff and age-appropriate playgrounds including wild places. Delivery of health services would also be a challenge, with a linguistically diverse and disconnected population and limited infrastructure.

Pam Garrett, director of planning at the Sydney Local Health District, said intersectoral collaboration was vital to ensuring the social determinants of health were considered in the Green Square rollout, citing the lack of a school plan as one example.

Professor Peter Sainsbury, former director of population health at the South Western Sydney Local Health District, condemned the fact that there was no school, and that unmitigated suburban sprawl had gone unchecked as a “failure of government”. 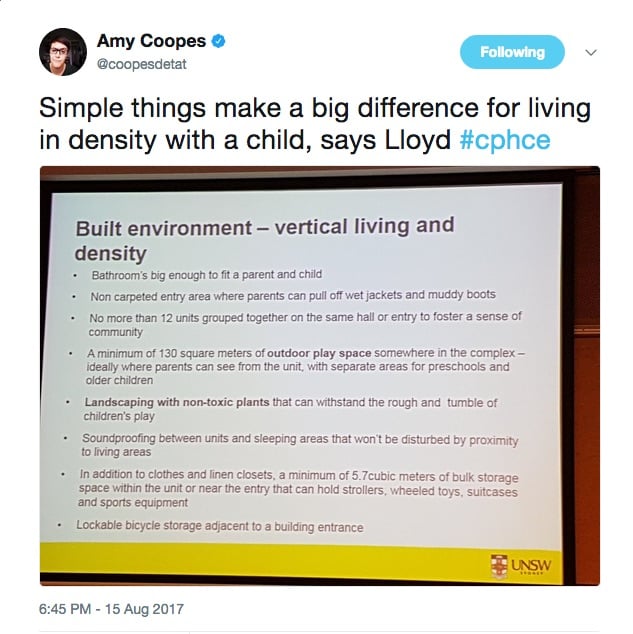 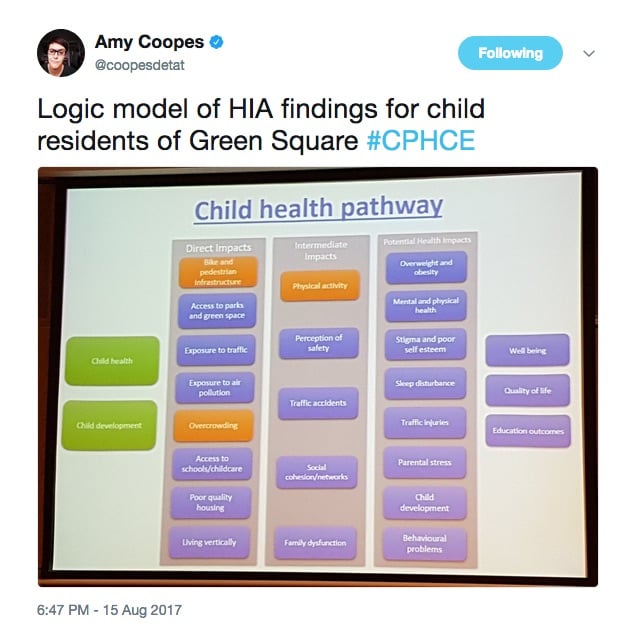 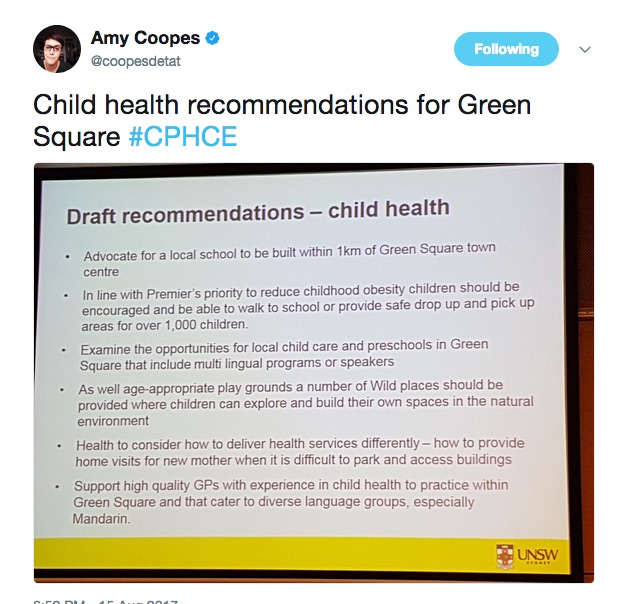 The link between health and happiness had been shrewdly captured by officials in the tiny, landlocked Kingdom of Bhutan, where proposals had to meet a Gross National Happiness index similar to the health in all policies framework, Harris-Roxas told the forum. 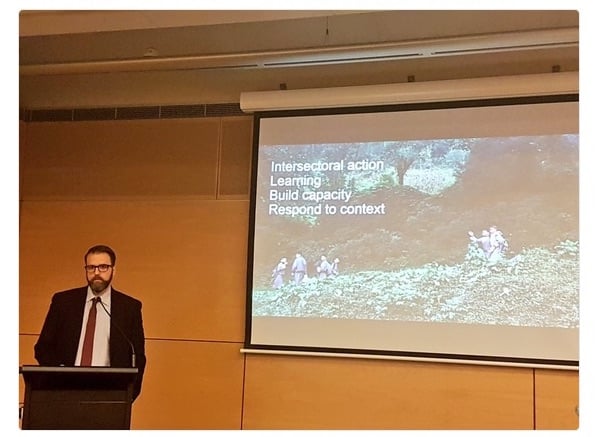 A democracy for just 12 years, Bhutan was seeing astonishingly rapid changes as globalisation prised open its borders, and CPHCE – through the WHO’s southeast Asia regional office – had been commissioned to conduct an HIA of an industrial estate expansion on the border of India and West Bengal.

As trade routes opened up, there was a real concern about bottlenecks, with traffic jams stretching back into India, he said. Cultural conservation was also an issue, with a Buddhist monastery located on the grounds of the estate.

With a series of similar new estates planned for rollout over the next 10 years, the Bhutanese government was anxious to explore how expanding trade links could be done in a way that was sustainable for health, and happiness.

Very much a local-led collaboration, Harris-Roxas said the process had been about capacity-building rather than top-down solutions, highlighting the importance of time and intersectoral approaches, shared learning, and the value of ‘reverse innovation’.

Health environments was a new research stream for CPHCE, and Sainsbury said it was an important dimension in understanding the social determinants of health.

Far from just bricks and mortar, he said the built environment reflected social relationships and power structures. In a practical sense, it also had the capacity to foster or infringe on wellbeing.

Focusing on the new Western Sydney Airport at Badgerys Creek, Sainsbury said CPHCE was exploring how to reframe debate and thinking over transformative new infrastructure to encompass – and be driven by – the potential for health.

This work was part of, and would inform, a global ‘Healthy Airports’ push, where new terminals and retrofits and their surrounds – the ‘aerotropolis’ – satisfied certain standards for health.

Some of the important dimensions identified so far in scoping work of the literature included the environment, ecosystem and economy, community and participation, heritage, form and design, transport, experiences and resources, services and facilities, health hazards and public health and health care.

The forum ran hot on social media, trending Australia-wide, reflecting keen interest in the overlap of planning and health, as is also being profiled in Croakey’s new #LookingLocal series.

More from the Twittersphere 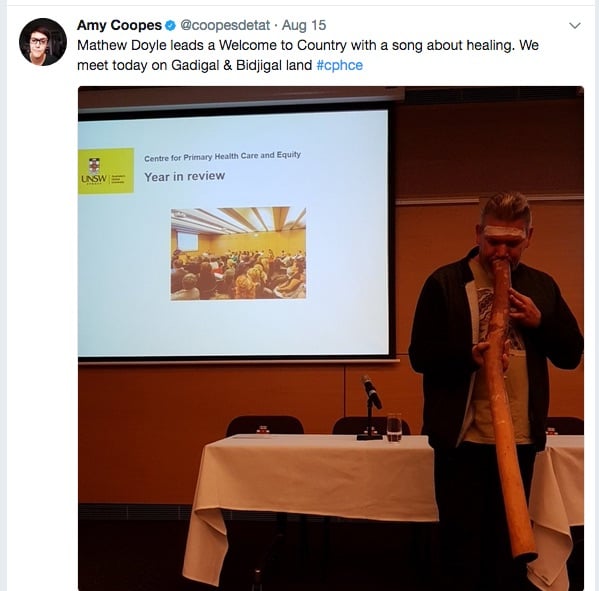 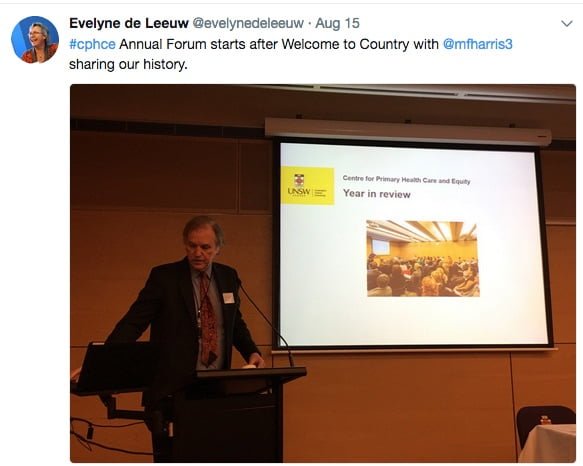 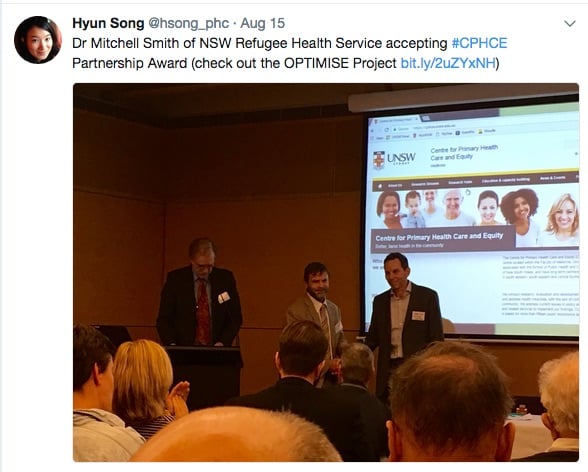 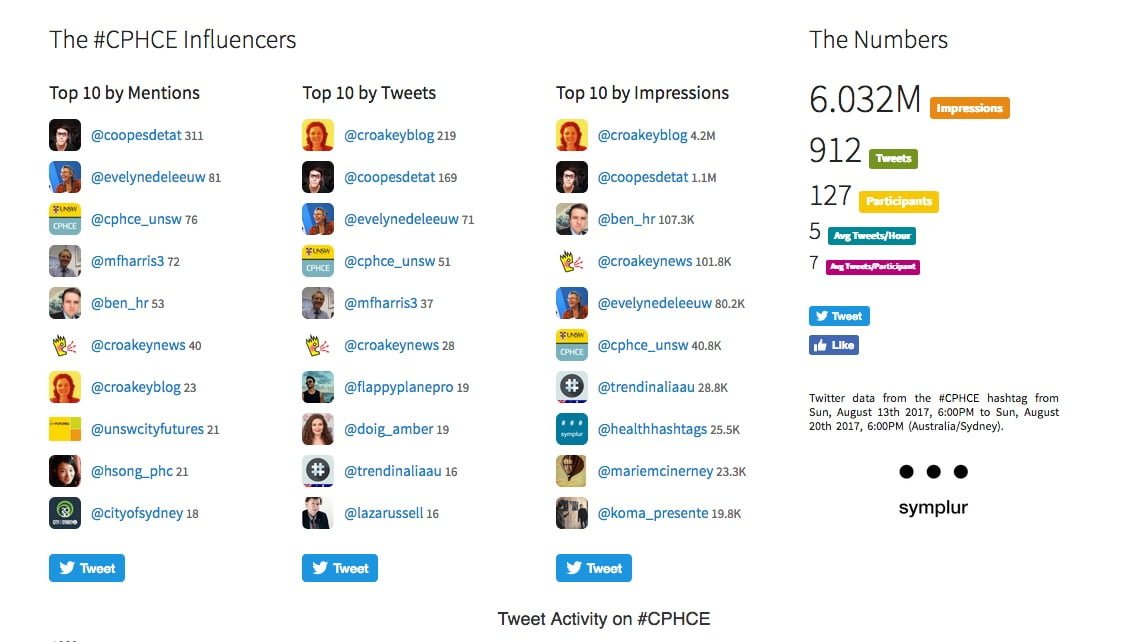 PrevPrevious#TheMHS2017 conference to centre the voices of lived experience
Next“Get The Facts on Immunisation”: or go beyond facts to get to the heart of concerns?Next