The TGA – a watchdog with dentures?

Note: A response from the TGA was added on 28 March – see bottom of post.

Questions are again being raised about the effectiveness of the Therapeutic Goods Administration as a regulator, with two Canberra University academics suggesting that “a culture of regulatory inertia” is entrenched at the TGA.

The company has been beset by concerns about product safety and quality control. In January, the US Food and Drug Administration banned importation of drugs manufactured in some Ranbaxy plants; in 2013 the company was fined $500 million and pleaded guilty to criminal charges arising from the sale of adulterated drugs to the US; and in 2012, the company recalled some 480,000 bottles of the same drug when small glass particles were found to contaminate some batches.

This has been followed by an application last week to the Indian Supreme Court attempting to get Ranbaxy’s manufacturing licence cancelled, or at least suspended, pending the outcome of an investigation into whether the company also distributed adulterated drugs in the Indian market.

This issue has received reasonable levels of media coverage overseas, including in the financial press.

The FDA has been active in its inspection of Ranbaxy facilities, and aggressive in imposing fines and sanctions for selling adulterated drugs in the US. The latest recall was initiated by the company, rather than the FDA; however the FDA has made it clear that it is monitoring the company closely.

A long history of communication failures

So why, then, hasn’t it been picked up here?

A search of the Australian Therapeutic Goods Register shown that Ranbaxy has sponsored the registration of several hundred products, including atorvastatin.

Registration is required before drugs can be supplied to patients, and a condition of registration is that the drug meets legislated requirements for patient safety.  Although regulators acknowledge that death or serious adverse consequences are unlikely to result from the incorrect dosage information triggering the current recall, it is nonetheless an unacceptable breach of the patient safety standards.

And yet, despite having de facto certified the safety of Ranbaxy’s drugs by including them in the ARTG, the TGA website provides no indication that it is even aware of the potential problems other jurisdictions have identified with these drugs in particular, and Ranbaxy in general, much less what steps it is taking to ensure patient safety in Australia is not compromised.

As a patient, this should be concerning. The TGA has a long history of failing to communicate concerns about drug and device safety to the public.

Litigation by patients (or their estates) against manufacturers of faulty drugs and medical devices is both common and expensive – recent examples include the class action over De Puy replacement joints; claims over the safety of Celebrex and Vioxx; and – finally – approval by the Victoria Supreme Court of a settlement agreement between victims of thalidomide and its manufacturer over birth defects caused by use of the drug to treat morning sickness in pregnancy. The monetary compensation received by plaintiffs is cold comfort when considered in the context of the catastrophic effects the faulty devoice or drug may have had on their lives.

It’s also not good from the perspective of the patient’s hip-pocket.

The competition provided by generic drugs entering the market generally has the effect of lowering the price paid by consumers and the taxpayer, through pharmaceutical benefits subsidies, not just for the generic version, but also the ‘label’ brand.

In consequence of this, there is little love lost between generic and label pharmaceutical companies; concerns about safety of generic products coming from countries like India could have a significant impact on the costs of pharmaceuticals and, ultimately, healthcare expenditure more broadly.

Given the importance of regulators in ensuring that drugs – both label and generic versions – are safe prior to entering the market, and monitoring them once they have been registered, the TGA is a notable absence from litigation arising from defective drugs and medical devices in Australia, despite strong indications that delays in regulatory response to regulatory activity in other jurisdictions may have permitted additional patients to be treated or supplied with the drug or device in question.

The TGA’s absence from litigation is virtually guaranteed by section 61A of the Therapeutic Goods Administration Act, which provides its officers with protection against any civil action arising from harm caused by the TGA’s actions – or inactions – unless they were carried out in bad faith.

Effectively, regardless of how negligent the TGA is in carrying out its job as the regulator, it cannot be sued by anyone who is harmed by its actions, unless the harmed party can show that the TGA was acting in bad faith.

Ideally, this provision should free up the TGA to carry out its role as a regulator without having to worry about being sued by disgruntled drug companies who experience financial loss as a consequence of the regulator adopting a proactive approach to patient safety concerns.

Unfortunately, the provision instead seems to have entrenched a culture of regulatory inertia, where even reports from other jurisdictions raising concerns about drug and device safety cannot prompt the TGA into action.

And apparently things have not gotten any better.

Despite the ongoing coverage of Ranbaxy’s woes in the international press intensifying over the past six months, the TGA has not released any warnings or updates on its website; there is no indication that it has begun checking whether the same issues could be affecting Australian patients as their US counterparts; and indeed, there is no indication that it is even aware of a problem.

Many patients (and practitioners) would probably find such an acknowledgement reassuring; indeed, given that the legislated purpose of the TGA is patient protection, it is baffling that it are not being more proactive in investigating the issue, or at the very least in communicating with patients and practitioners that there may be an issue.

The TGA is an active participant in programs to harmonise regulatory requirements for medical devices and drugs, as is the US; it seems logical to assume that such arrangements should, if they don’t already, include information-sharing arrangements, such as notification of adverse events and patient safety issues.

But it is not enough simply for the regulator to be informed – it must also take steps to share that information with key stakeholders, including those most likely to be affected by it, Australian patients.

The immunity provisions in the TGA Act provide it with a shield behind which it can hide and do nothing, without fear of consequence.

Repeated instances of fence-sitting by the TGA are increasing the potential for patient harm in a way that is inconsistent with its legislated purpose, and does enormous harm to public confidence in the effectiveness of the agency as a regulator.

This response from the TGA was posted on 28 March. 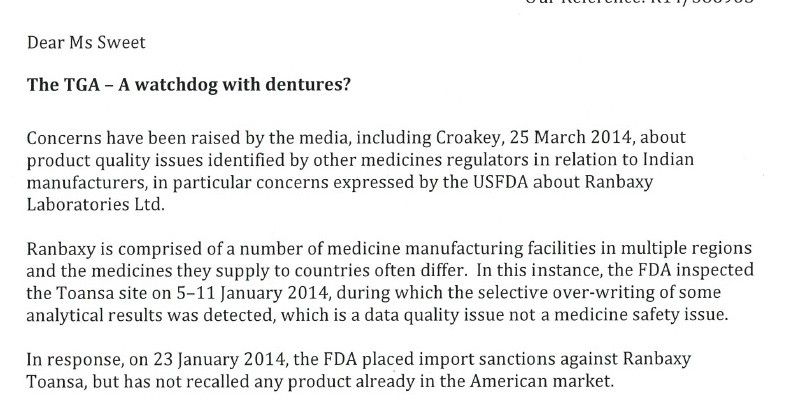 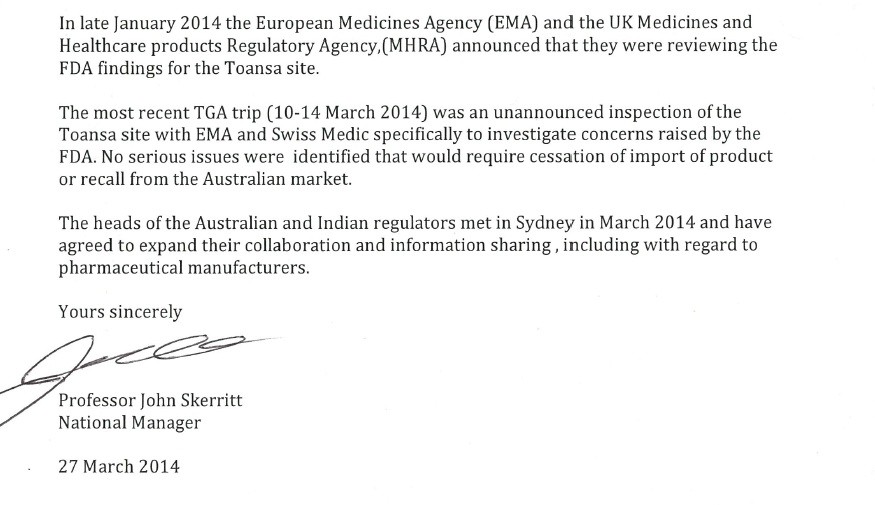 Health Journey Mapping: having a yarn about health

ICYMI…catch up on climate, COVID, monkeypox, upcoming events and the latest news

PrevPreviousCatch some beautiful songs and stories and have a laugh too: showcasing strong culture
NextWhat did you do while the earth was unravelling? Health sector urged to act on climate changeNext