The thinking behind Drink Tank, and other public health news about alcohol

The opportunities of the digital age are changing the way public health advocates engage with the wider community, as evidenced by the recent launch of Drink Tank, a new “conversation space” for discussions about alcohol.

In the article below, Michael Thorn, Chief Executive of the Foundation for Alcohol Research and Education (FARE), explains some of the thinking behind the new site.

He says: “It is only by following communication innovations that public health advocates will be able to mobilise the support to bring about necessary public policy changes.”

At the bottom of the post are some links to other public health news and initiatives related to alcohol.

Behind the scenes of Drink Tank

At a time when everyone can be a publisher if they wish, why launch another online commentary site into the already crowded and noisy ether?

Drink Tank aims to generate commentary and debate about alcohol policy and to be a platform for sharing views and concerns about the use and abuse of alcohol in Australia. But there is more to the site than meets the eye. 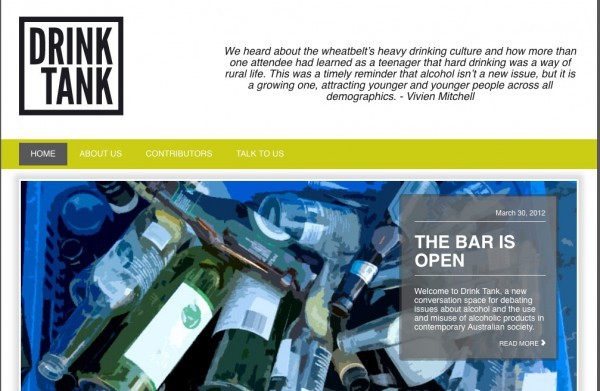 Drink Tank is a means to an end. Certainly, as the sponsor of the blog, FARE is keen it has good and entertaining writing – writing that challenges and engages, and makes people think.

But its main purpose is to prompt discussion about alcohol in the blogosphere that will influence behaviour change.

Communications trends clearly demonstrate the value and importance of social media. Nick Bilton’s terrific book I live in the future and here is how it works has influenced FARE’s thinking.

Bilton, the lead technology writer for The New York Times Bits blog, writes about social networks and how a radically changed media world is influencing human behaviour. He borrows an idea from long-time Cornell University academic Benedict Anderson to develop the idea of ‘imagined communities’ to explain the online world.

He argues that the concept of imagined communities takes us beyond geography. These communities are about shared interests; some are connected and overlap, but most don’t. Nevertheless, they are dynamic and subject to influence by other communities in our lives. At any time we may be members of a number of different communities.

As technology continues to expand and strengthen personal, professional and social connections across space and time, online communities are also growing. It is this that shaped the creation of Drink Tank.

Drink Tank is a connecting point, or an overlap, for a range of diverse imagined communities around the issue of alcohol and its use. With any luck – and we’d like to think there has been a fair bit of science too – these separate communities might talk about and debate alcohol’s health and cultural factors in their own ways.

We are looking to tap into the way people today conduct their conversations, and increasingly this is taking place in a digital environment on platforms like Twitter, Facebook and of course on blogs. In this way we can engage more widely in discussions about the harmful effects of alcohol.

Newspapers, television and radio remain dominant mediums, but increasingly we are moving towards a wholly digital world and advocacy organisations will need to weigh up where to put their resources.

FARE uses both old and new form to maximise the number of ‘eyeballs’, but if Bilton’s hypothesis is correct and his imagined communities explain how individuals manage the surfeit of digital information; selecting what they wish to digest, trusting some sources over others, and ignoring and dumping the rest, then we can confidently rely upon digital options in the future.

In this way FARE surfs the communication trend and achieves its aim of promoting discussion about a public health issue that is crying out for significant policy reform. It is only by following communication innovations that public health advocates will be able to mobilise the support to bring about necessary public policy changes.

This is another innovative use of online space for sharing stories and conversations in a way that is intended to change drinking culture in a number of countries.

As the site says: “Hello Sunday Morning is a way for any individual to take a break from drinking and recreate the drinking culture around us. Since 2010 over 2400 people have signed up to go 12 weeks or more without alcohol, and blog about their journey on Hello Sunday Morning . This year we want to find 10,000 people who are ready to take on the challenge.” 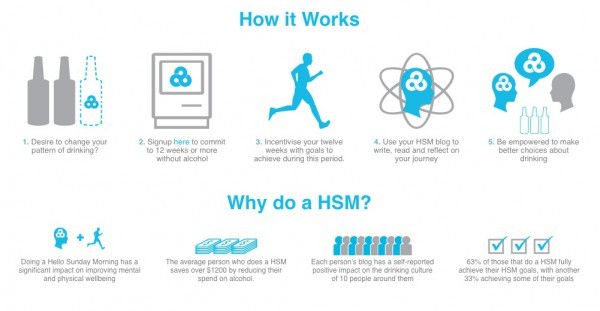 Young adults who drink to risky levels may benefit from a text messaging based intervention encouraging safer drinking, a recent study suggests.

The subjects were randomly assigned to to weekly text messaging-based feedback with goal setting, weekly text-messaging based drinking assessments without feedback, or a control group.

The researchers said their study, despite having limitations, was the first to show that text message-based interventions are feasible and potentially associated with reductions in alcohol consumption and hazardous use of alcohol in young adults who are discharged from the ED.

“Because we used an automated computer system, our intervention has the ability to provide text message-based feedback and support at a large scale with minimal cost. As well, it avoids the time and cost of ED-based brief interventions, which despite recommendations, have not been adopted widely.”

A larger study was now needed to test the intervention more rigorously, they said.

The study was reported in the March issue of Alcoholism: Clinical and Experimental Research. An abstract is available here (if you would like a copy of the full paper and an associated commentary, please leave your details below or email me direct.)

The UK move towards minimum pricing for alcohol

It’s interesting to see that the NHS Behind the Headlines service is providing analysis of public health as well as clinical interventions.

Its assessment of the plans for minimum alcohol pricing in the UK (a minimum price of 40 pence per unit as part of a wider strategy to curb health problems and crime associated with binge drinking) notes that the price of most drinks would be unaffected by a 40p threshold, although many super-strength and own-brand products could see large price rises.

It says that each year alcohol causes over 1 million NHS hospitalisations and 1 million violent crimes in England, primarily through binge drinking. Recently released NHS figures revealed that deaths from liver disease had risen by 25% in less than a decade, mainly driven by alcohol.

A minimum price is supported by many experts, academics and alcohol charities on the grounds that it will “reduce harms”. Work by researchers at Sheffield University in 2008, commissioned by the Department of Health, modelled the likely effects of various policy options on alcohol pricing and promotion.

It found that on balance there was evidence that increases in alcohol prices are linked to reductions in both alcohol consumption and alcohol-related harms, and can bring “significant health and social benefits”. Projections in the study predicted that a 40p minimum price would mean 41,000 fewer hospital admissions annually and 100,000 fewer daily absences from work.

(Meanwhile, this piece in The Scotsman notes, in a “been there, done that already, if anyone had bothered to notice” tone, that the UK move is not without precedent.)

PrevPreviousThe Grim Reaper: 25 years on, do we need another such campaign?
NextThe latest media coverage of Ben Cousins has been uninformed, simplistic and unhelpfulNext