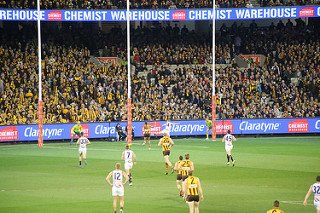 The unhealthy side of sport

AFL is the most popular spectator sport in Australia and sponsorship of AFL teams is a multi-million dollar business.   Sponsorships are an important revenue source for AFL but when they involve the promotion of foods with low nutritional value or addictive practices, like gambling, do these deals come at a cost to the health of our community?

A team from the Public Health Advocacy Institute of Western Australia, Curtin University has investigated the range of different sources of AFL sponsorship and reports below on the ‘health rating’ of each team.

By AFL is big business in Australia with an average of 4.466 million people watching on free-to-air and subscription television each week in 2015.  The 2016 Grand Final reached 6.5 million viewers (not including those attending in person). It is not only watched consistently by adults but children are also voracious viewers of AFL and tune in to watch their favourite players, with many dreaming of becoming the next footy star.

With this in mind, and based on the evidence that shows 10- to 14-year-olds think food and drink companies that sponsor their favourite team are “cool”, the Public Health Advocacy Institute of Western Australia (PHAIWA), Curtin University decided to have a closer look at who sponsors our AFL teams.

PHAIWA recently completed a review of both 2017 AFL corporate sponsors and uniform sponsors to determine how many were healthy (green), moderate (amber), unhealthy (red) or other.

The review was conducted by searching corporate sponsors on each AFL team page (community partners, suppliers, and women’s team sponsors were excluded). It also assessed the sponsors displayed on the 2017 playing uniforms. These were determined by viewing the official playing uniforms on the club stores and through desktop google searches. 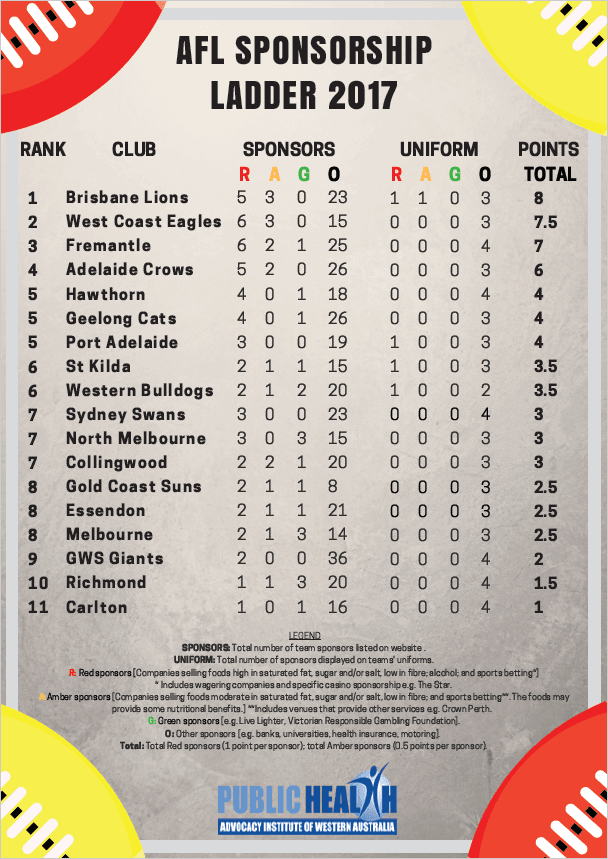 The results are in….

Given that AFL is clearly the most popular spectator sport in Australia, the impact that advertising has on children and young people is an important public health issue. Current statistics tell us almost one in four Australian children is currently overweight or obese, and few eat enough of the right foods or do enough physical activity for healthy development.

We also know that in 2014, almost half of all secondary school students aged 12 to 17 years had consumed alcohol in the year preceding the survey, 25% for the past month and 15% for the past week. So we really don’t need any more messages out there to encourage unhealthy behaviours. But what we found was that each AFL team was sponsored by at least one red sponsor.

Four teams had red sponsors on their playing uniforms -the Brisbane Lions (XXXX Beer), Port Adelaide (Four ‘N Twenty), St Kilda (DARE Iced Coffee) and the Western Bulldogs (Mission). Sponsor logos on sports uniforms not only increases the visibility of the brand for spectators, but also enables fans to regularly purchase apparel that is plastered in sponsor logos.

The good news is that 12 of the AFL clubs had at least one green sponsor (e.g. Anytime Fitness and Victorian Responsible Gambling Foundation) and all 18 clubs had other sponsors (e.g. Hyundai and Choices Flooring). This provides an indication that alternative sources of sponsorship can be found if clubs wanted to replace their ‘unhealthy’ sponsors. Netball Australia recently announced a 6-figure, three year sponsorship deal with Aussie Apples, which indicates partnering with healthy sponsors is not only possible, but can also be a financially lucrative option.

Moving forward, an outcome would be for AFL teams to have only healthy sponsors on their uniforms. Of course another option is to ‘buy out’ unhealthy sponsors. This has occurred in Western Australia, with support from the government funded health promotion foundation, Healthway, where sporting clubs such as the Perth Wildcats are now plastered with health promoting messages and branding.

Change is clearly needed to shift the focus away from visual presence of unhealthy sponsorship, while ensuring sports clubs remain commercially viable. Healthway’s innovative sponsorship strategy, although resource intensive, is one that could potentially be rolled out nationally.

At the local level, many demonstration projects have occurred to try to reduce unhealthy sponsorships of sport. VicHealth’s Healthy Sporting Environments Demonstration project was a pioneering program that supported grassroots sports clubs to become healthier and more welcoming and inclusive.

Clubs develop their identities and culture over a number of years, sometimes decades, and are shaped by the choices they make. It is timely for the AFL and other sporting codes to reconsider their sponsorship arrangements with unhealthy products and seek out ethical sponsorship in the interest of the public good rather than simply the revenue.

PrevPreviousRural health sector urged to get its evidence together
NextToday is tomorrow’s history – be brave, so we can envisage Australia in 2037 like thisNext