The verdict is in: Time to better protect Australian children from toxic lead exposure 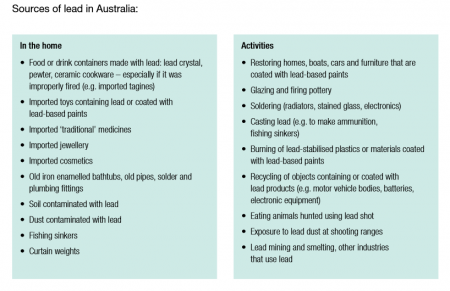 The National Health and Medical Research Council today released its revised Statement and Information Paper summarising the evidence on the effects of lead on human health, in which it lowered the level of lead in blood at which the sources of exposure are to be investigated and reduced, from ten to five micrograms per decilitre (click twice to enlarge the image, left, from the NHMRC report on sources of lead in Australia). The NHMRC said:

“People do not need to have their blood lead level tested unless they suspect they have been exposed to lead through activities such as restoration of old homes or furniture. People should consult their general practitioner if they are concerned.

In communities that are at risk of lead exposure due to industry (e.g. lead mining or smelting), health authorities should continue to run programs to monitor and reduce lead exposure.”

In this article from The Conversation below, Professors Mark Patrick Taylor and Bruce Lanphear welcome the decision but say it has taken too long and doesn’t go far enough to protect children. They say we need to develop an immediate, detailed plan to reduce blood lead levels in children in high-risk mining and smelting regions, and must conduct a random survey of Australian children to quantify lead exposure.

The National Health and Medical Research Council (NHMRC) today released new guidelines aimed at reducing children’s harmful exposure to lead. Soil, dust, water and air-based exposure to lead can interfere with the development of the nervous systems and cause behavioural and developmental problems.

The effects of lead exposure are greatest in unborn children and those aged under five years, when their growing brains absorb high levels of calcium. Because lead (Pb2+) mimics calcium (Ca2+), children in lead-rich environments absorb larger amounts of lead in place of calcium.

The conclusions from the review that formed the basis of the new guidelines indicate the NHMRC may be more interested in minimising the evidence linking low-level lead toxicity than minimising widespread exposure to a widely recognised poison.

The NHRMC is far more cautious than other international scientific advisory panels. The NHMRC concluded that:

The evidence for health effects occurring as a result of blood lead levels less than ten micrograms per decilitre is less clear.

This conclusion contrasts starkly with the more strongly worded conclusions of other federal and international agencies. The United States Environmental Protection Agency report, for example, identified that childhood blood lead levels between two and eight micrograms per decilitre were causally related to decrements in cognitive function.

The United Nations Environmental Programme and the US Centers for Disease Control concluded that:

there is no evidence of a “threshold” or safe exposure.

The US National Toxicology Program reported that there was sufficient evidence to conclude that blood lead concentrations less than five micrograms per decilitre are associated with intellectual deficits (lower IQ score), academic disabilities, attention-related behaviours and problem behaviours: 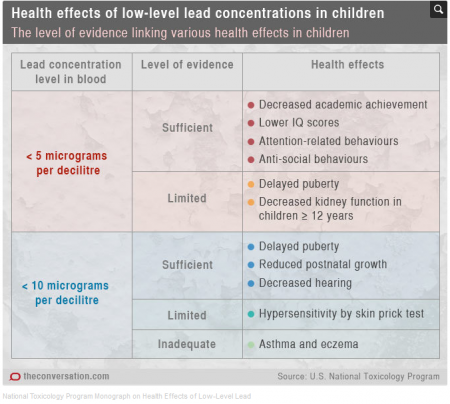 The most heavily contaminated children are located in Australia’s premier lead mining and smelting towns where lead emissions in the air and dust remain far too high: Mount Isa, Port Pirie and Broken Hill.

Not surprisingly, approximately 50% of children under five years of age have a blood lead above five micrograms per decilitre. These levels are comparable with children from lower-income, rapidly industrialising countries.

To be fair, there have been significant recent financial investments to improve environmental quality in Australia’s major lead mining and smelting towns:

Nevertheless, emissions from mining and smelting are the primary source of exposure in these communities, and local children’s blood lead levels signify a public health crisis.

A detailed plan to dramatically lower lead emissions and reduce the fraction of children who have blood lead levels above five micrograms per decilitre to zero by the year 2020 should be established immediately.

What about other Australian children?

The NHMRC was unable to estimate the average level of lead in Australian children’s blood outside of lead mining and smelting towns because there is no surveillance.

A 2008 study of a small cohort of children in Sydney showed 7.5% had a blood lead level more than ten micrograms per decilitre. If that number is remotely reflective of current exposures, we are failing to protect a very large number of children.

It’s critical to conduct a random survey of Australian children to quantify lead exposure, including enrichment of children from higher risk areas. These data are essential to develop policies to protect children and develop evidence-based policies.

The NHMRC report wrongly focuses on managing suspected cases of lead exposure, when, in fact, the key to preventing lead poisoning – and the reason for the dramatic reduction in blood lead levels over the past 40 years – is the universal reduction of ongoing contamination of lead exposure.

The NHMRC strategy is to target high-risk children. But unless there is a threshold, the high-risk approach will inevitably fail to protect the majority of those affected, albeit at lower levels. This is called the prevention paradox.

Lead-associated IQ deficits offer a compelling example. Targeting children who have a blood lead concentration above five micrograms per decilitre is efficient because it captures individuals most affected; the average lead-associated IQ loss for these children is about 6.2 IQ points.

However, in a six-year cohort of US children, those who have a blood lead concentration above five micrograms per decilitre account for fewer than three million (around 18%) of the 23 million IQ points lost due to lead toxicity.

So, by focusing only on high-risk children, we will ultimately fail to protect the majority of children who are affected adversely by lead and other toxins.

Towards cleaner air, soil and water

Early and effective intervention is important because the emerging evidence shows that the effects of childhood lead exposure do not remit with age.

Proper, long-term intervention won’t be easy, but reducing lead exposure is extraordinarily cost-beneficial. American economist Elise Gould estimated that for every US$1 invested in reducing childhood lead exposure from residential hazards, society would benefit from US$17 to US$221, a cost-benefit ratio comparable with childhood vaccines (US$1 to US$16.5).

So, now that interventions are expected to occur at the new lower level of five micrograms per decilitre, it is important that the relevant environment and health agencies promulgate better standards for the most likely sources of exposure in children: air, dust, soil and water.

Air and dust quality are the most important aspects for mining and smelting communities, because contaminant emissions form toxic depositions in yards, homes, and on surfaces that children interact with resulting in subsequent exposure.

In environments where legacy emissions have contaminated soils, it will be important to lower the acceptable standard for soils in domestic residences from 300 mg/kg to something that aligns with California’s acceptable level of 80 mg/kg to provide proper protection.

In these situations, exposure risks are well known and because they are modifiable, we have duty to act in terms of dealing with the ongoing contemporary sources of emissions.

However, these initiatives will not work without continued pressure to improve environmental standards along with significant efforts to ensure lead-safe messages are both current and constant.