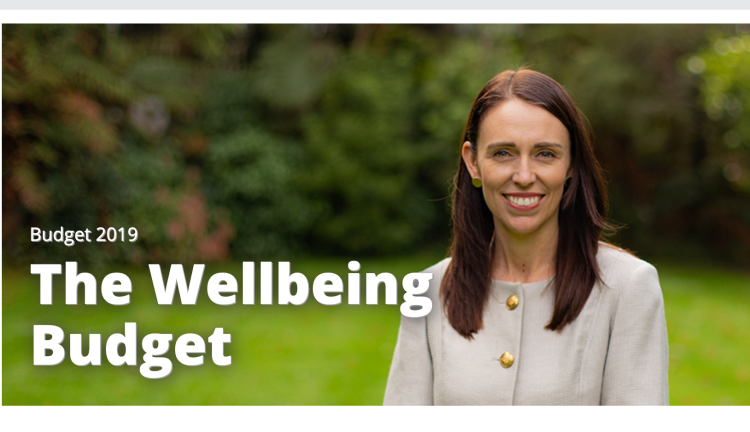 The Wellbeing Budget recently handed down in Aotearoa/New Zealand was a hot topic of conversation at the Public Health Prevention Conference in Melbourne last week (see tweets beneath this post from Dr Val Kay).

My interest in the Wellbeing Budget was piqued last year when I had the chance to do this interview with Professor Louise Signal (@SignalLouise) about efforts to tackle child poverty in Aotearoa/New Zealand. She was participating in a Centre for Research Excellence on Health Equity meeting at the time.

According to NZ’s Prime Minister Jacinda Ardern, the Wellbeing Budget broadens “our definition of success for our country to one that incorporates not just the health of our finances, but also of our natural resources, people and communities” – see more here.

The Budget acknowledges that “just because a country is doing well economically does not mean all of its people are”.

It puts the focus on addressing challenges like the mental health crisis, child poverty, domestic violence and the environment and says “we cannot meaningfully address complex problems like child poverty, inequality and climate change through traditional ways of working…”.

“Making the best choices for current and future generations requires looking beyond economic growth on its own and considering social, environmental and economic implications together,” it says.

Here are the five priorities of the Wellbeing Budget, including ‘a sustainable and low-emissions economy’.

Here you can read about the evidence behind the Wellbeing Budget’s priorities and how the processes differed from usual budgets. Looks like it was about busting silos and fostering cross-portfolio collaboration.

Wouldn’t it be great to have some fly-on-the-wall analyses of the Wellbeing Budget processes – what were the facilitators and roadblocks for getting politicians and bureaucrats to work differently. Wonder if Professor Louise Signal or others can advise if this sort of work is being undertaken?

Here you can delve into the Living Standards Framework Dashboard, “a practical set of meaningful current and future wellbeing indicators” to assist.

It’s acknowledged this is a first iteration and that more work is needed to “improve known gaps and limitations. These include more fully and richly expressing and representing Te Ao Māori perspectives, child wellbeing, NZ cultural identity, and risk and resilience”.

These are the 12 domains of wellbeing identified in the Wellbeing Budget, including ‘civic engagement & governance’. You can read the full budget document here. 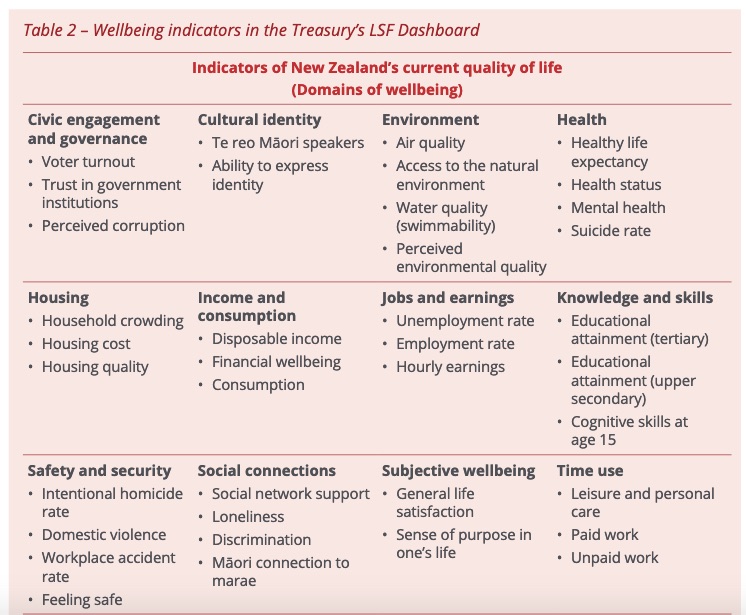 Here is a rather cautious welcome from the New Zealand National Office of the Royal Australian and New Zealand College of Psychiatrists, @ranzcp_nz.

My first port of call is The Conversation – a very useful source for news and analyses on public policy matters (and another reminder of the importance of ensuring sustainability of public interest journalism initiatives).

In this article, Professor Troy Baisden of University of Waikato investigates the likely environmental impacts of the Wellbeing Budget, and  says that it “signals a meaningful shift, but more in intention than sufficient funding”.

He also says there has been “a persistent pattern through the past decade of underspending compared to what was announced in budgets”, so it may be a case of ‘keep watching this space’ to see what the Wellbeing Budget delivers for environmental health.

In this article, Professor Christoph Schumacher from Massey University explores whether the Wellbeing Budget deserves this title. He acknowledges the arguments for moving beyond GDP as the dominant indicator.

GDP doesn’t tell us whether people are struggling to meet basic needs or if everyone has access to health care & education.

Neither does it give insight into whether people have social connections, feel safe, are happy…”

He lists the Budget’s investment in mental health, in Whānau Ora (a programme that puts Māori families in control of services they need), and investment in tackling family and sexual violence. Interestingly, the mental health budget provides a funding boost for Housing First.

Arthur Grimes, Professor of Wellbeing and Public Policy (great title!), from Victoria University of Wellington, looked at precedents for the Wellbeing Budget before it was handed down.

Surprise, surprise! He notes that the Australian Treasury had a wellbeing framework, way back in 2004 when John Howard was PM.

The Australian Treasury’s wellbeing framework “never made it to the frontline of political debate”, says Grimes, citing this 2011 paper.

Grimes also notes that other conservative leaders have engaged with the concepts behind the Wellbeing Budget, including David Cameron in UK in 2006, and French president Nicholas Sarkozy in 2009. So the NZ approach is “far from new”, he says. And yet…

Meanwhile, Dominic O’Sullivan, Associate Professor of Political Science at Charles Sturt University, has written on the Budget and ‘Lessons in the politics of Indigenous self-determination’.

He says the Wellbeing Budget “makes a significant contribution to Māori self-determination”, and also notes that Māori representation in the NZ Parliament has been guaranteed since 1867.

Dr Kate C Prickett from Victoria University of Wellington laments the absence of children’s aspirations from the Wellbeing Budget. While it’s important to tackle childhood poverty, she says children’s views of wellbeing are far more wide-ranging.

She cites research asking thousands of NZ kids what makes a good life. The findings: to have enough money for the basics (but perhaps a treat once in a while), strong and healthy relationships with their families and peers, and to be accepted as they are, free of bullying, racism and discrimination.

Prickett questions whether the Wellbeing Budget includes measures to support this last aspiration of NZ children.

Her conclusion regarding the Budget and children:

If we don’t make children part of the well-being equation, above and beyond a focus on those living in poverty, they might begin to look more and more like the budget losers over time.”

But of course the impact of acting on climate change and environmental degradation also needs to be considered as acting in the interests of children, thinking of their futures, and their children’s futures…

Here is another academic identifying another gap in the Wellbeing Budget: Simon Chapple from Victoria University of Wellington says the NZ Govt “missed a major trick in not making unemployment one of their central well-being priorities”.

Views from other media

Writing for Bloomberg, Cass Sunstein, author of “The Cost-Benefit Revolution” and a co-author of “Nudge: Improving Decisions About Health, Wealth and Happiness”, wrote this article, ‘New Zealand’s Wellbeing Budget Is Worth Copying‘.

He said it had been influenced by researchers including Nobel Prize winner Daniel Kahneman and the late Alan Krueger, who offered two important findings about what increases people’s wellbeing and what reduces it.

Firstly, “focus on mental health interventions,” and secondly “focus on time allocation,” by helping people to shift away from activities that they especially dislike (such as commuting, which can take a significant toll).

This is determined by how people answer: “If you were in trouble, do you have relatives or friends you can count on to help you whenever you need them, or not?”

Whether a nation’s citizens say “yes” or “no” is a significant determinant of how happy they are. 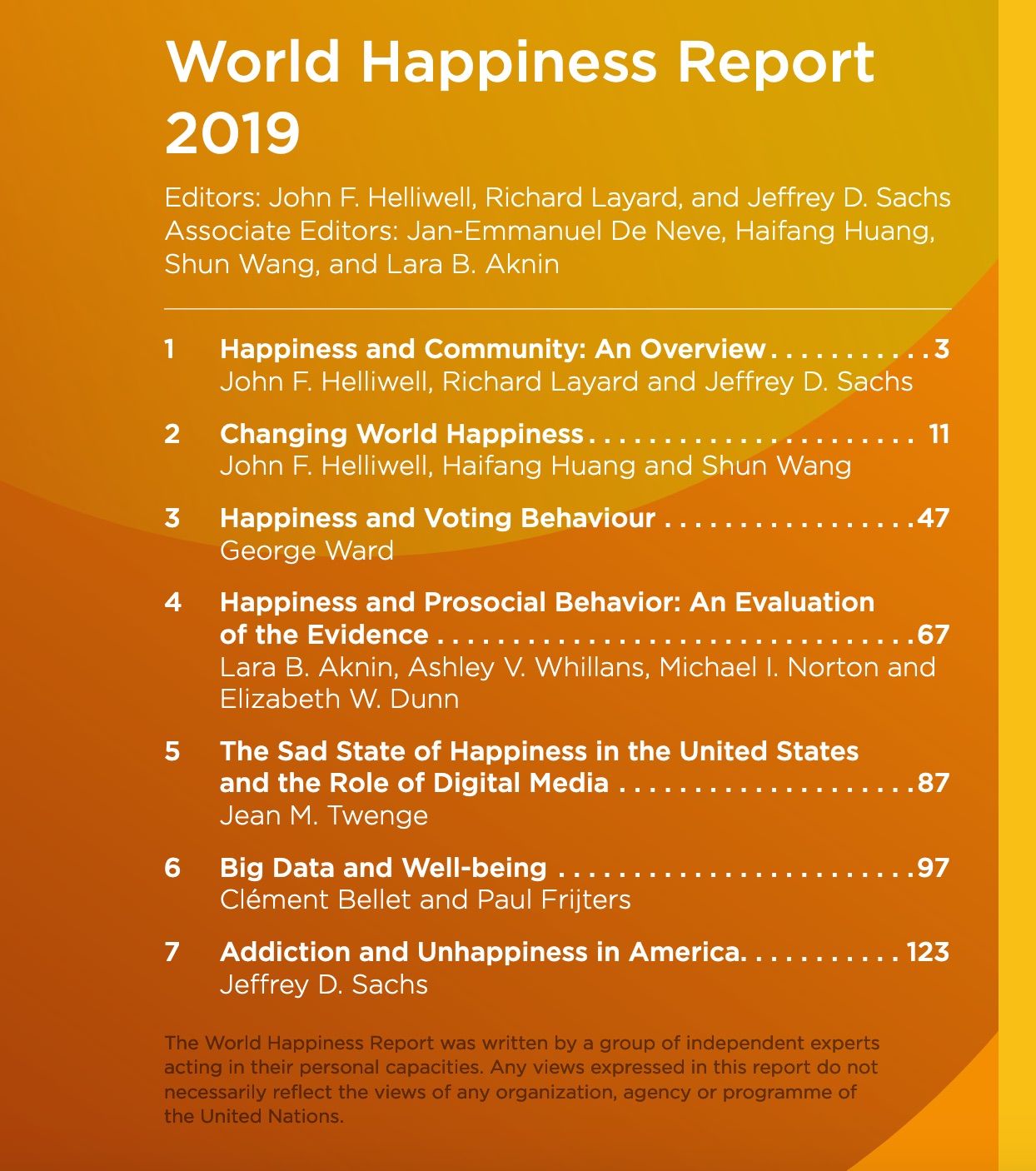 The article concludes: “New Zealand has taken an important step in the right direction. Other nations should follow its lead.”

Meanwhile, it seems chartered accountants are not so enamoured, raising a series of questions and suggesting the Budget is “more evolutionary than revolutionary”:

The Wellbeing Budget made headlines around the world. A column in The Washington Post was quite positive, titled ‘What nation isn’t obsessed with ensuring economic growth?’.

It remains to be seen how effective [the Wellbeing Budget] will be at addressing the issues it calls out, or whether the initiative will outlast the tenure of progressive Prime Minister Jacinda Ardern.

But as a statement of values and a signpost for other modern governments, it’s a major step.”

This article in The Guardian quotes extensively from NZ finance minister, Grant Robertson, who says the Wellbeing Budget:

…responds to New Zealanders’ values. Yes, we want to be a prosperous country, of course we do, but we also care about who shares in that prosperity and how it is sustainable.

I genuinely think people’s sense of wellbeing is about the broader sense of the community, of the environment, and of their family and the people around them.”

The article asks: Should the UK follow suit? After all, the Welsh government’s 2015 Wellbeing of Future Generations Act, requires public bodies in Wales to take into account the social, cultural, environmental and economic impact of decisions. (And you can read more about that Welsh Act here).

Meanwhile, the Huffington Post reports a variety of views.

“What Jacinda Ardern is doing is groundbreaking,” said Jason Hickel, an anthropologist at the London School of Economics. “Ardern’s government is setting an example that the rest of the world can and should follow.”

“It is sobering that this is the first time we have had a national budget that explicitly focuses on well-being,” said Anna Matheson, senior lecturer in health policy, Victoria University of Wellington.

“Challenges facing humanity globally – increasing inequality, rising populism and rapid environmental degradation, including the crisis with our climate – show governments worldwide are missing the crucial and pivotal role they play in stewardship, and in creating/maintaining collective well-being.”

Not everyone is a fan, however.

“I think this Wellbeing Budget is nothing else than a public relations operation,” said Dennis Wesselbaum, director of foreign policy at Otago University. “This budget means the government does not care about economic growth and this is a worrying and dangerous development.”

Meanwhile, it is worth making time to read this detailed analysis by the Child Poverty Action Group, @childpovertynz (and thanks Dr Rhys Jones for the lead).

The CPAG congratulates the Government for reframing the Budget to reflect human wellbeing outcomes, and says its priority areas are largely needed as a result of a low wage economy, inadequate welfare support, inequality and intense personal structural pressures caused by poverty.

However, the group says that “billions are to be spent in addressing the outcomes of social injustice but little is to be spent in transforming the actual causes of the issues”.

It says the Budget “fails to be genuinely transformational because its focus is on ameliorating the impacts of poverty rather than addressing its root causes”.

And also read a range of takes courtesy of The Spin Off (which incidentally describes itself as “the mid-shelf red wine of NZ journalism”).

The tweets below are from the recent Public Health Prevention Conference. Read more about Dr Val Kay’s work on economism here. 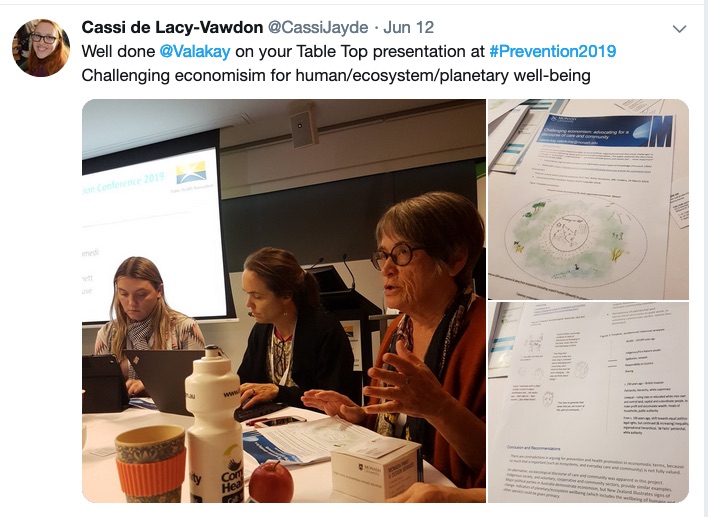 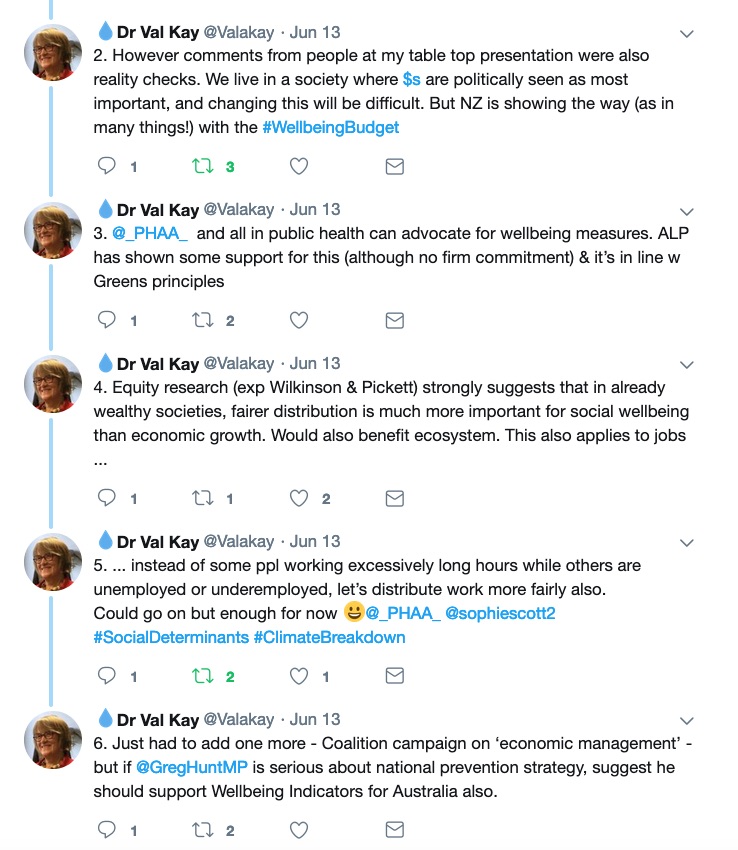 Meanwhile, delegates at the Lowitja Institute’s second International Indigenous Health and Wellbeing Conference in Darwin heard today from Dr Julia Kim about Bhutan’s Gross National Happiness Centre (and this will be reported further at Croakey).

In 1972, the term “GNH” was first coined by the fourth King of Bhutan, King Jigme Singye Wangchuck,  when he declared, “Gross National Happiness is more important than Gross Domestic Product.”