The now-closed Wuhan wet market which, in the early days of the pandemic, was blamed as the source of the virus.

The WHO report into the origin of the coronavirus is out. Here’s what happens next, says the Australian doctor who went to China

Introduction by Croakey: Australia is one of 14 nations that today issued a joint statement expressing concerns, which implicitly criticised China, that the World Health Organization’s international expert study into the origins of COVID-19 “was significantly delayed and lacked access to complete, original data and samples”.

The WHO overnight published a report on the investigation by an international team that visited Wuhan, China earlier this year, which found that introduction of the SARS-CoV-2 virus that causes COVID-19 most likely came from bats via some intermediate animal into humans and that the least likely pathway explored was that it escaped from a laboratory in Wuhan.

The joint international team’s assessment of four likely pathways was that:

WHO Director-General Dr Tedros Adhanom Ghebreyesus welcomed the report as an “important beginning” of global investigations but said no single research trip finds all the answers. He said:

As far as WHO is concerned, all hypotheses remain on the table. This report is a very important beginning, but it is not the end.

We have not yet found the source of the virus, and we must continue to follow the science and leave no stone unturned as we do.”

That was also forcefully urged by Australia and the governments of Canada, Czech Republic, Denmark, Estonia, Israel, Japan, Latvia, Lithuania, Norway, the Republic of Korea, Slovenia, the United Kingdom, and the United States in their statement, published on the United States State Department website.

“It is critical for independent experts to have full access to all pertinent human, animal, and environmental data, research, and personnel involved in the early stages of the outbreak relevant to determining how this pandemic emerged,” they said.

Professor Dominic Dwyer, Director of Public Health Pathology in New South Wales Health, was a member of the WHO team investigating the origins of COVID-19 in Wuhan.

In an article, originally published at The Conversation, he writes about the findings and criticism, urging further investigations, collaboration and the need to avoid over-politicisation in order to come to a better understanding of COVID-19’s origins.

He told ABC radio the outbreak “certainly exploded in the market in Wuhan, there’s no doubt about that, but what the virus was doing in the few weeks beforehand is the part that’s really hard to tease out”.

“It’s not unknowable but it’s not known at this time,” he said of any ‘smoking gun’.

See also this Twitter thread from US virologist Dr Angela Rasmussen, who said a two-week mission could not be expected to yield a definitive answer about SARS-CoV-2 origins but that the WHO experts’ report contains some new information: about excess mortality, influenza-like illness, environmental testing, retrospective sample testing, and animal testing.

Australia was, however, missing as a signatory to a call from 25 nations, along with the European Union and the WHO, for an international treaty to combat future pandemics.

The statement, signed by the leaders of the United Kingdom, France and Germany and, in our region, of Indonesia, Thailand and Fiji, warns that no single government or multilateral agency can address the threat of future pandemics alone.

They say the main goal of the treaty would be to foster an all-of-government and all-of-society approach, strengthening national, regional, and global capacities and resilience to future pandemics.

“This includes greatly enhancing international cooperation to improve, for example, alert systems, data-sharing, research, and local, regional and global production and distribution of medical and public health counter measures, such as vaccines, medicines, diagnostics and personal protective equipment,” they said.

It would also include recognition of a “One Health” approach that connects the health of humans, animals, and our planet.

The World Health Organization (WHO) overnight released its report into the origins of the coronavirus, a report I contributed to as a member of the recent mission to Wuhan, China.

The report outlines our now well-publicised findings: SARS-CoV-2, the virus that causes COVID-19, most likely arose in bats, and then spread to humans via an as-yet unidentified intermediary animal. The evidence we have so far indicates the virus was possibly circulating in China in mid-to-late November 2019. We considered viral escape from a laboratory extremely unlikely.

Read more: I was the Australian doctor on the WHO’s COVID-19 mission to China. Here’s what we found about the origins of the coronavirus

However, the release of the report prompted governments, including in the United States, United Kingdom and Australia, to share their concerns over whether investigators had access to all the data. The joint statement also called for greater transparency when investigating pandemics, now and in the future. 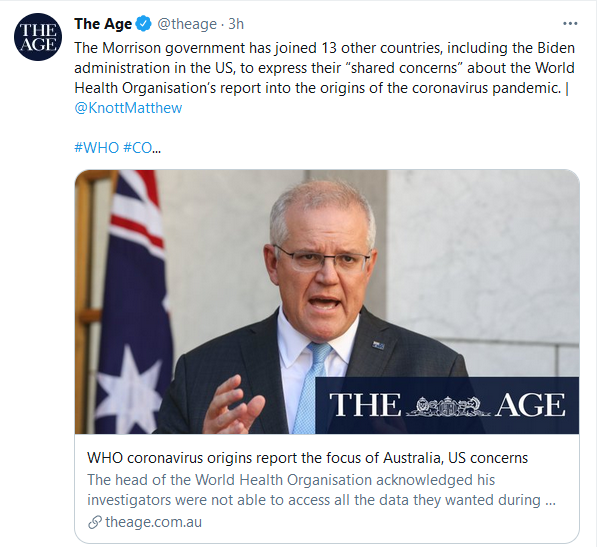 So what happens next?

Our report also recommended what research is needed for a more complete picture of the origins of the coronavirus.

The key focus of this next stage of investigations is looking at what happened before people realised there was a clinical problem in December 2019, not just in China but in other countries with early cases, such as Italy and Iran. This would give us a more complete picture of whether SARS-CoV-2 was circulating earlier than December 2019.

For instance, if we just focus on China for now, we know there were influenza-like respiratory illnesses in Wuhan in late 2019. In fact, we looked at data from more than 76,000 cases for the WHO report, to see whether these could have been what we now call COVID-19. But work is already under way to re-analyse those data using different techniques, to see if we’ve missed any earlier cases.

Read more: Yes, we need a global coronavirus inquiry, but not for petty political point-scoring

Talks are also under way to see whether blood donations in China in 2019 can be analysed to see if they contain antibodies to SARS-CoV-2. This would tell us whether the people who donated those samples had been infected by the virus. These types of investigations take time.

Then there’s what we can learn from molecular epidemiology (the genetic makeup of the virus and its spread). For instance, if we find a lot of variation in the genetic sequence of early samples of SARS-CoV-2, this tells us there had already been transmission for some time. That’s because the virus doesn’t mutate unless it infects and transmits. We can use modelling to say what might have happened up to three or more weeks beforehand.

We also need to link those molecular epidemiology data to actual clinical data. Until now those data have largely been separate, with the molecular data held in research or university laboratories and the patient data held elsewhere. We need to make those connections to tell us which infections were related, and how far back in time they go.

There are also many biological samples sitting in laboratories around the world that we need to analyse, and not just in Wuhan. So we have to do a bit of detective work to locate them and analyse them to understand the pattern of disease and to help sort out the origin. There is no central database of samples and what antibodies or genetic material they might contain.

For instance, there are SARS-CoV-2 positive blood donations in the US and France, and cases in Italy, and there’s sewage testing in Spain. These are places with early outbreaks of respiratory illnesses that may help us find out if SARS-CoV-2 was circulating earlier than we first thought.

We also need more studies into the role of frozen food products in transmitting the virus. Although we considered the “cold chain” a possible pathway to transmission, we still don’t know how big a factor this was, if at all.

Read more: Was coronavirus really in Europe in March 2019?

Finally, there’s ongoing sampling of animals and the environment for signs of SARS-CoV-2 or related viruses. Can we find the parent virus (the one that eventually mutated into SARS-CoV-2) in a bat in a cave somewhere? Where do we look? At bats across Southeast Asia, Central Asia, into Europe? We need to look at the range of these bats and where they live. These types of investigations can take ages.

Can we find the virus in an intermediary animal, and if so, what type of animal and where? Again, these are difficult studies to set up.

The key here is to keep trying to work together and avoid the over-politicisation of the whole exercise.

Rather than blaming governments, we need to foster cooperation and trust between investigators, between and within countries. This not only helps us during this pandemic; it’s the key to managing future pandemics. The more cooperative we are, the more likely we are to get the best results. We have to make sure politics doesn’t muck that up.

PrevPreviousCabinet reshuffle raises many concerns, but also calls and hope for shift on asylum seekers
NextPlease take part in our survey on how you engage with Croakey on social mediaNext