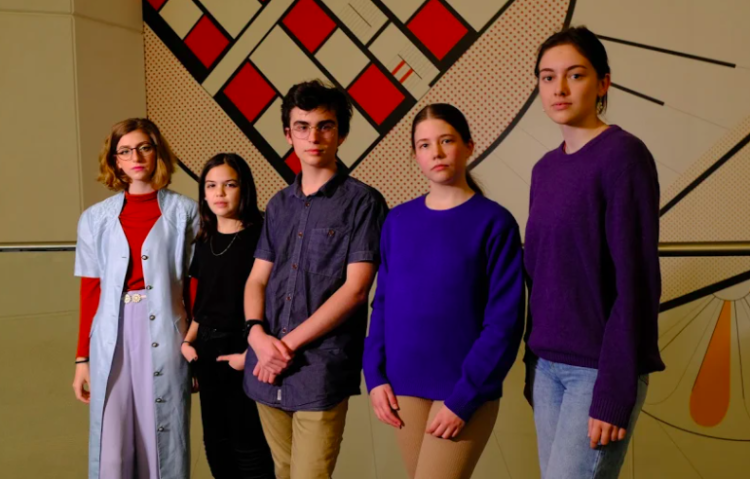 These teens have launched a landmark climate case against the government. Win or lose, it’ll make a difference

Introduction by Croakey: As Guardian Australia reported this week, the COVID-19 pandemic will deliver an unprecedented annual drop in global greenhouse gas emissions of up to seven percent by the end of 2020, but the slowdown’s impact on the atmosphere will be almost imperceptible.

That’s according to the compelling United in Science 2020 report, compiled by the World Meteorological Organization (WMO) under the direction of the United Nations Secretary-General, which tells us that global fossil CO2 emissions reached a new record high of 36.7 Gigatonnes (Gt) in 2019, 62 percent higher than in 1990.

Amid the ongoing failure of the Australian Government to act on climate change, a group of young Australians has filed a class action, arguing that approval for a new mine will breach the duty of care owed by the Environment Minister to them.

It’s a novel approach that, as Laura Schuijers, Research Fellow in Environmental Law at University of Melbourne writes below, could have wide-ranging implications. This article, from The Conversation, is republished here as part of the #CroakeyYOUTH series, providing a platform for young people to share their views on health matters.

They are bringing their case to the Federal Court. They argue if Whitehaven’s Vickery coal mine expansion in New South Wales is approved, it will contribute to climate change which endangers their future.

Saying the Environment Minister owes the young plaintiffs a duty of care is a novel approach. In their view, signing off on a new coal project will breach that duty. Such an approach to a climate change case has not been tested before in Australia, and would chart new territory if successful.

Although a legal victory would appear difficult on these grounds, the implications of this case are already significant. They show young people, determined to fight for action on climate, will continue to find new ways to hold powerful people to account.

What is the case about?

The case concerns a proposal to construct an open-cut coal mine, about 25 kilometres north of the NSW town of Gunnedah. It’s an extension project, meaning it will expand a mine that has already been approved, increasing its coal production by about 25%, and emissions by 100 million tonnes of greenhouse gases over the life of the project. The coal would be exported.

Like many mining proposals, this one has been divisive. Farmers worry about competing for water, and the local community has expressed concern over the environmental record of the coal company.

Yet in August, the NSW Independent Planning Commission approved the proposal, finding the expansion is in the public interest, given the forecast jobs and revenue. It has not yet received federal approval.

What are the teenagers arguing?

The young plaintiffs are not bringing their case under environmental law, which would be the traditional way to launch a legal challenge objecting to a coal mine.

Environmental law invites government decision-makers to balance competing concerns — such as economic benefits versus environmental impact — with no clear stipulation as to how much weight to give each relevant factor.

There is limited recourse to argue a decision is wrong because the positive and negative impacts were not given particular priority by a minister. This means decision-making on major projects is largely within the political realm.

Instead, the plaintiffs are arguing the Environment Minister shouldn’t approve the coal proposal because doing so would breach a duty of care owed by the Minister to protect them from the harmful impacts of climate change. This includes more frequent extreme weather events, and destruction of the natural systems that support human life.

The case has parallels with a landmark Dutch case, where it was successfully argued in 2019 that the Dutch Government breached its duty of care to its citizens through inadequate action on climate change.

For the Australian case to succeed, the Court will first need to consider whether a duty of care exists in Australian law. There is no statutory duty (under laws created by the parliament), so the Court would need to “find” the duty as existing in common law.

Then, the plaintiffs would need to establish that the duty would be breached by the environment minister signing off on the coal project.

Establishing both these things is likely to be very difficult in our legal context. From past cases, we know Australian courts have been reluctant to find a causal link between climate change and individual projects, even large mines. However, this link was found in a NSW case last year.

The court is likely to look closely at the particular relationship between the minister and the vulnerable young people, who will be strongly impacted by climate change but have no voting rights. It will consider whether they represent a particular class of individuals, in relation to which the minister has a responsibility.

One of the plaintiffs’ lawyers recently highlighted a case that potentially paves the way to support this idea. In 2016, the Federal Court found the immigration minister Peter Dutton owed a duty of care to a vulnerable refugee with a history of trauma, who was detained on Nauru.

One thing in the current case’s favour is that, similar to the Dutch case, the plaintiffs are not seeking monetary compensation. If they were, the difficulty for the courts to determine what future obligation the government might have to pay out young people would, almost undoubtedly, prohibit success.

What’s also interesting about this case, unlike the Dutch case or the famous Juliana case that was recently quashed in the US, is that it’s not asking the government for broad-scale policy action on climate change. It’s only concerned with one coal mine approval. This is a more straightforward remedy which a court could be more willing to grant.

If the case successfully established a duty and that it was breached, this would open up the possibility future coal approval decisions would also breach the duty — somewhat of a Pandora’s box.

Although we will have to wait and see what the Court says, the suit will draw attention to the government’s climate policies, whether or not it succeeds.

Either way, the teenagers in this case are part of a growing number of people willing to find creative avenues to pursue action, even if it means taking a long shot. And beating the odds is exactly how the law tends to evolve.

‘A wake-up call’: why this student is suing the government over the financial risks of climate change

PrevPreviousWhy this public health academic is looking forward to going back to work
NextSelf-determination matters for healing, empowerment and suicide preventionNext