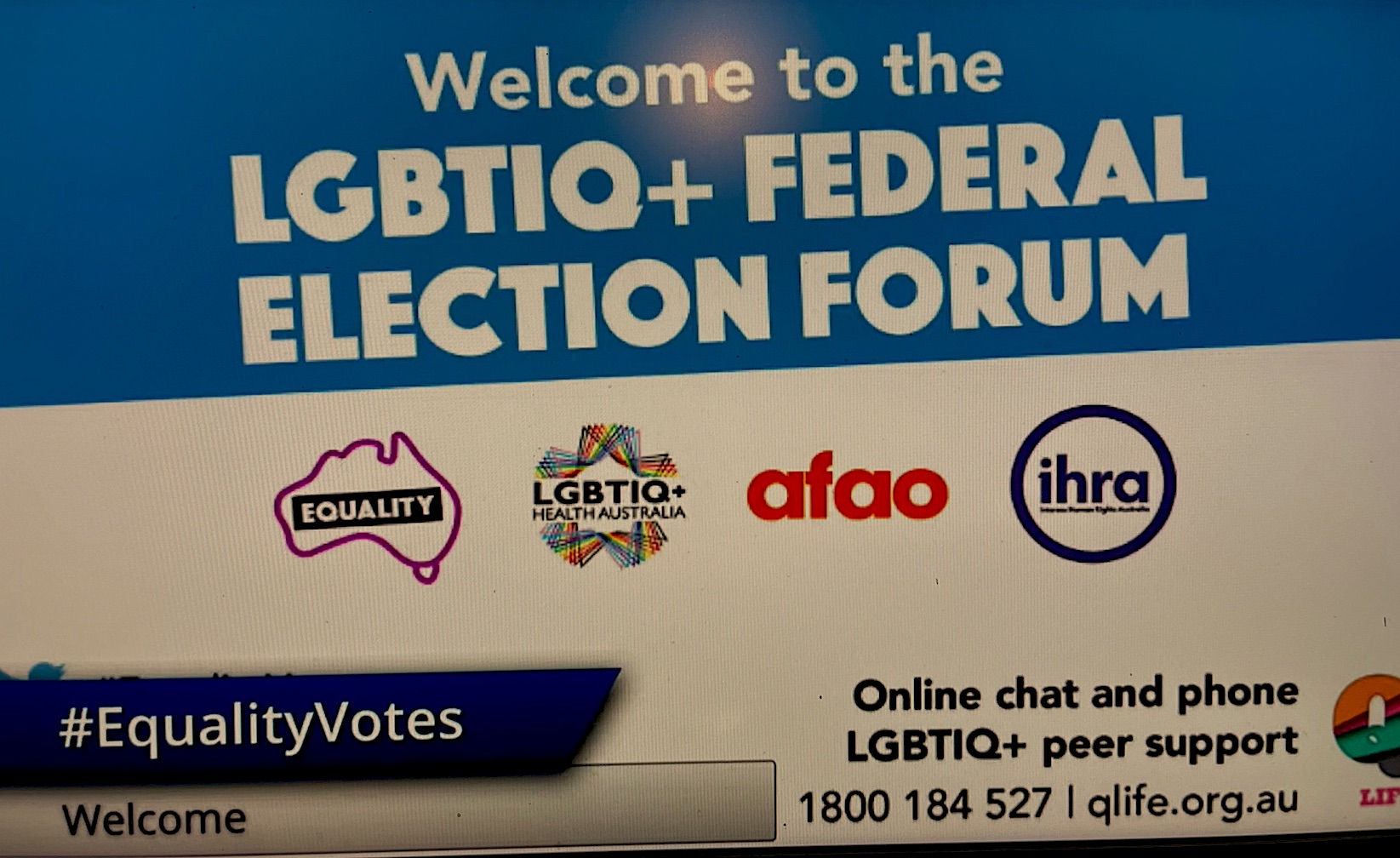 Putting the focus on #EqualityVotes

This election, what’s on the agenda for LGBTIQ+ people and organisations?

A recent election forum for lesbian, gay, bisexual, trans/transgender, intersex, queer and other sexuality, gender, and bodily diverse (LGBTIQ+) people heard from representatives of the Liberal, Labor and Greens parties.

Nicky Bath, CEO of LGBTIQ+ Health Australia (LHA), reports below on the discussions, and urges the next Parliament to “change to a culture of health and wellbeing investment in LGBTIQ+ communities”.

“The reality for LGBTIQ+ people and organisations is that so many are tired of fighting in an under-resourced environment that can be incredibly harmful and hostile,” she says. “LGBTIQ+ people’s lives are kicked around like political footballs during election campaigns.”

In many countries globally it would be seen as outlandish for representatives from major political parties to gather with lesbian, gay, bisexual, trans/transgender, intersex, queer and other sexuality, gender, and bodily diverse (LGBTIQ+) people to discuss their health and wellbeing.

Currently 36 of the 53 Commonwealth countries still criminalise LGBTIQ+ people with laws written in colonial times. We cannot take for granted the fact that such a forum can be safely held in Australia.

And so, on the evening of 5 May 2022 I found myself in the iconic Victorian Pride Centre at a ‘Q&A’ styled LGBTIQ+ Election Forum, a joint initiative of LGBTIQ+ Health Australia (LHA), Equality Australia, Intersex Human Rights Australia and the Australian Federation of AIDS Organisations (AFAO).

At a time when important issues for LGBTIQ+ people are seen by some in politics as controversial and not a vote winner, it was significant that all three major parties were represented.

It was a night of announcements and good-natured discussions, and it underscored why there has been little progress eliminating health disparities for LGBTIQ+ Australians.

The Coalition highlighted $4.2 million over three years from 2022-23 to 2024-25 for national services to support the mental health and wellbeing of LGBTIQ+ Australians from the National Suicide Prevention Leadership Support Program grant round.

The Greens committed to their fully funded policy initiative to achieve equality for every person in the LGBTIQA+ community, and to hold whoever forms government to account.

Labor, in addition to goals in their 2021 National Platform, agreed to reinstate funding that AFAO and National Association of People with HIV Australia missed in the third round of the Health Peak and Advisory Bodies Program funding as part of the National Preventive Health Strategy. Senator Wong also promised $400,000 investment in QLife and $250,000 for LHA to undertake a national consultation with LGBTIQ+ communities and the Department of Health to feed into the development of a national LGBTIQ+ Health Action Plan.

The Forum was a credit to Australia’s democratic process, with the community asking questions of politicians from the floor with follow up questions from Patricia Karvelas to get to the heart of the points being discussed.

The forum was an important opportunity for political focus on LGBTIQ+ people in a way that only occurs as part of federal election campaigns, and we take that seriously.

Yet, during the forum I found myself increasingly frustrated.

The next parliament will either fully commit to working with LGBTIQ+ communities to eradicate the unrelating health disparities in a concerted and informed way – or not.

The reality for LGBTIQ+ people and organisations is that so many are tired of fighting in an under-resourced environment that can be incredibly harmful and hostile. LGBTIQ+ people’s lives are kicked around like political footballs during election campaigns.

Trans and gender diverse people, particularly transgender women, have found themselves in a harmful media spotlight of misinformed coverage about their participation in sport, at great cost to their mental health, wellbeing and safety. And as was demonstrated at the forum, there is poor understanding on the issues that intersex people face.

During the Forum, it was concerning to hear an unhelpful comment from the stage that LGBTIQ+ organisations are always seeking new funding. Senator Bragg asked on several occasions if funding for LGBTIQ+ community-controlled organisations was being invested correctly.

We make no apologies for asking for investment in our communities. Without a doubt, there has been millions of dollars invested over time and it is often uncoordinated, insufficient and with no national oversight across the silos of Government.

The next parliament needs to change to a culture of health and wellbeing investment in LGBTIQ+ communities that prioritises community expertise and is planned appropriately in a 10-Year National Action Plan.

For instance, LHA has just received $3.7 million over three years for national services to support the mental health and wellbeing of LGBTIQ+ Australians from the National Suicide Prevention Leadership Support Program grant round.

We of course welcome this investment, noting that funding has been reduced for the Mindout Program, which led building the capacity of the suicide prevention sector and delivering policy and advocacy initiatives at the national level. There is no longer funding for national policy and advocacy.

Suicide is raging through LGBTIQ+ communities and we are rightly a priority population in national strategies.

If we continue with business-as-usual, we will see little if any change in the health and wellbeing disparities of LGBTIQ+ people. We need systems-driven change and multi-partisan whole of Government approaches. We need action based on evidence, not an individual’s morals or beliefs.

Andrew Bragg said, “a mark of a good society is how it treats a minority group”. For Australia to demonstrate it is a good society for LGBTIQ+ people, there is a lot of work to do and it must be done with and by LGBTIQ+ community-controlled organisations. LGBTIQ+ people are not the problem; we are central to the solution.

Regardless of who wins the election, LHA will continue its important and valuable work as national peak health organisation in Australia for organisations and individuals that provide health-related programs, services and research focused on LGBTIQ+ people.

LHA will continue to promote its election priorities, work across parliament and be the key tool for change striving to achieve the vision of healthy LGBTIQ+ people and communities throughout Australia and the world, free from stigma and discrimination.

• Read more about the forum on Twitter at #EqualityVotes 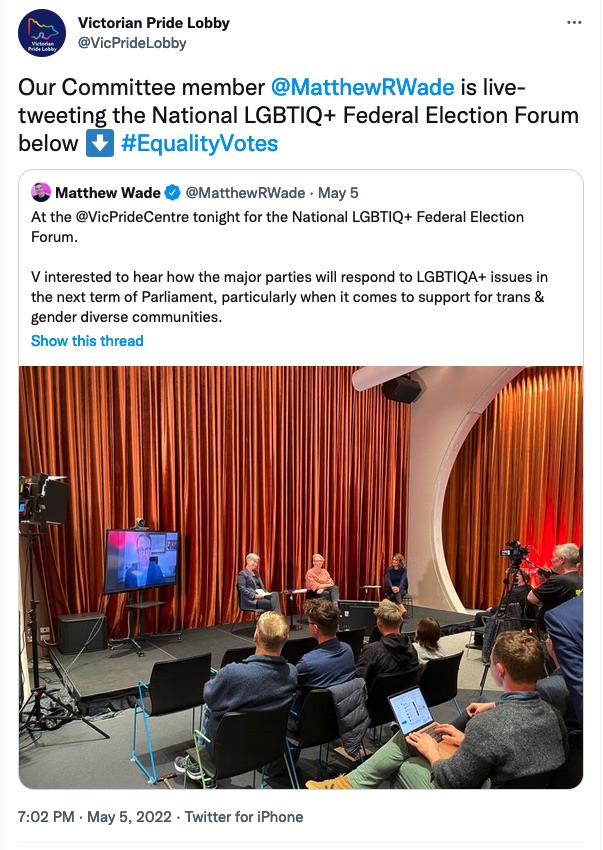 PrevPreviousBridging the gap in food security and inequity – a call for action
NextReflect, reimagine and revive. Putting a timely focus on health workforce wellbeingNext