Will the devastation now facing Vanuatu be the tragic reality check that global leaders need to develop a new framework for global action to reduce the risks of disasters – and one in which protecting people’s health will be at the centre, for the first time?

That’s certainly the urgent hope of Vanuatu President Baldwin Lonsdale who was at the UN Conference on Disaster Risk Reduction in Sendai, Japan on the weekend when Cyclone Pam slammed into his Pacific island nation.

Australian Foreign Minister Julie Bishop today announced a $5 million assistance package, and aid agencies are flying in with supplies from Australia and New Zealand as we await news on the full scale of the disaster. Lonsdale has said he fears the damage will be “the very very, very worst” in isolated areas.

Thanks to the ABC Croakey for the list of agencies accepting donations:

According to this report, President Lonsdale and his team were trying on Monday to get back to Vanuatu as soon as they can but acknowledged that being at the conference in Japan has made it easier for them to request help from other governments, the United Nations and international organisations. They also want it to lead to global action on disaster risk such as climate change. Vanuatu was last year assessed in the 2014 World Risk Report as the country with the greatest risk of disaster worldwide, due to its vulnerability as a developing nation and exposure to risks.

In a statement issued by the conference, Lonsdale said:

This is a major calamity for our country. Every year we lose 6 per cent of our GDP to disasters. This cyclone is a huge setback for the country’s development. It will have severe impacts for all sectors of economic activity including tourism, agriculture and manufacturing. The country is already threatened by coastal erosion and rising sea levels in addition to five active volcanos and earthquakes. This is why I am attending this Conference and why Vanuatu wants to see a strong new framework on disaster risk reduction which will support us in tackling the drivers of disaster risk such as climate change.” 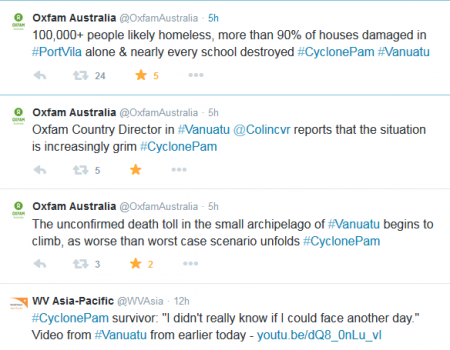 The World Health Organisation today announced three initiatives to support countries as they translate the goals of the framework into action for health.

“In the 10 years since Hyogo, governments have increasingly recognized that healthy people are resilient people, and that resilient people recover much more quickly from emergencies and disasters. Recent and ongoing disasters – from Typhoon Haiyan in the Philippines to the Ebola crisis in West Africa – highlight the centrality of human health to our collective goals in disaster risk reduction by all sectors.”

But Rachel Kyte, World Bank vice president and special envoy for climate change, said there appears to be a disconnect between policy and the increasingly-frequent weather-related disasters the world is suffering.

“I worry that a sense of urgency and a sense of shared ambition is not at the right level,” she said in this AFP report.

“It’s hugely ironic that this storm should hit Vanuatu  while we are all here. If we truly care for those people, we have to respond…”

Late last year the Federal Government was seen to bow to international pressure when it announced it would after all commit $200 million, from its foreign aid budget, to a global fund to help developing nations deal with climate change.

However organisations like Oxfam Australia have warned that more than $10 billion in cuts to foreign aid over the past year pose a risk to work on disaster preparation in our region.

In other recent news on climate and health, Doctors for the Environment held their iDEA annual conference focusing on climate change in Sydney. Twitter users can follow highlights at #iDEA15 or see some of the tweets here below.

One of the speakers at the conference was Dr Richard Giles who recently published this call to arms in the MJA. As fellow Croakey moderator Michelle Hughes noted last week, the comments thread is nearly as interesting as the article with a broad range of opinion on the reality of climate change and the role of the medical profession. Another keynote speaker (via video) at the iDEA conference was AMA President Brian Owler – in this article in Business Spectator Dr Owler sees a “clear role for doctors” in tackling the issue.

See also this article by long-term Guardian newspaper editor Alan Rusbridger: “Climate Change: why the Guardian is putting threat to earth front and centre.” In it, he talks about the media outlet’s renewed focus on climate change and his regret that “we had not done justice to this huge, overshadowing, overwhelming issue of how climate change will probably, within the lifetime of our children, cause untold havoc and stress to our species.” 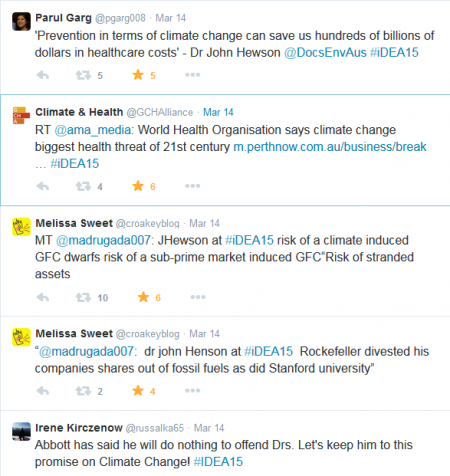 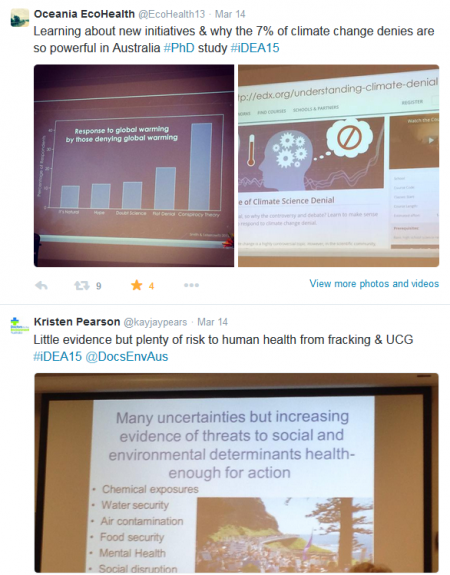 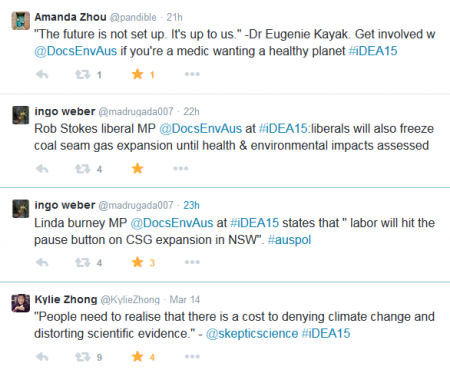 PrevPreviousRural health leader scoops an “interview” with the PM… #LifestyleChoice
Next‘Unfair and arbitrary. Is the only thing new in the Indigenous Advancement Strategy a new round of a massive funding cuts?’Next