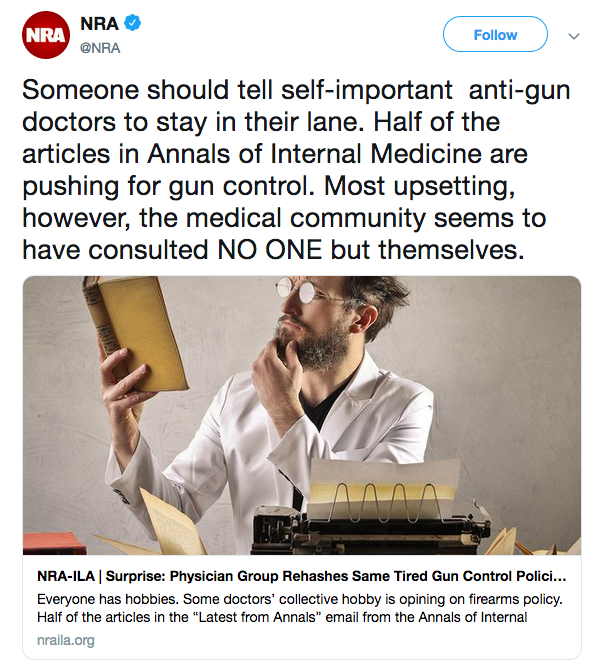 #ThisIsOurLane – doctors hit back at NRA over gun violence

Australian doctors have joined a global pushback against America’s National Rifle Association over an incendiary social media post urging “self-important” medicos to “stay in their lane” on the issue of gun control, following yet another mass shooting in the United States.

The NRA post, which was prompted by the publication in the Annals of Internal Medicine of a new American College of Physicians position paper on firearms death and injury, was met with outrage from doctors across the United States and the world, who responded in their tens of thousands with harrowing accounts of treating gunshot victims using the hashtag #ThisIsMyLane.

My lane is a pregnant woman shot in a moment of rage by her partner. She survived because the baby stopped the bullet. Have you ever had to deliver a shattered baby? #ThisisMyLane . What’s yours? #Docs4GunSense

Moments you always remember. Medics furiously doing CPR on an 8 yo. Small hole just above left eye. Best friend was showing off his dad’s pistol. Asystole, no hope. Such a small body, such a small hole. He died. You have no idea what we see when we close our eyes. #ThisisMyLane

Taking care of a 3 y/o boy for weeks after he shot himself in the gut playing with his father’s loaded rifle.

Trying to stabilize a man who shot himself in the head in a failed suicide attempt & laid on his floor for hours choking on his own blood.

In Australia, where gun reforms introduced following the deadly 1996 Port Arthur massacre have been hailed as a public health success story, surgeons and emergency doctors shared their own starkly contrasting stories:

I’d love to tell you all my stories of taking bullets out of people’s brains and spines but I live in #Australia so there have only been 2, despite working in the biggest and busiest #trauma centres for over a decade #ThisISMyLane #Thisisourlane Prevention is better than cure.

As a doctor in Australia who has worked in maxillofacial units for 7 years… I have never seen a gunshot wound, or someone with the effects of a gunshot wound to the face. Ever. We all know what’s different. #ThisisMyLane #guncontrol

5 years practising medicine in Australia and I haven’t treated a gunshot wound. This is my lane, but there’s no traffic. For that I thank strong bipartisan gun control policies and no powerful interest groups controlling policy. I hope the USA is lucky enough to have this someday

Hey @NRA : I’ve worked in kids’ emergency for 10 years. Know how many child victims of gun violence I’ve treated? ZERO. How many families shattered by gun violence I’ve had to comfort? Yup, ZERO. Why? I’m in Australia, with strict gun laws protecting our children #ThisISMyLane

I have never seen nor treated a gunshot injury in Australia or NZ, despite years of general surgical training. Sadly my US equivalents have a much heavier burden. #ThisisMyLane and grateful I am able stay in it.

I have treated exponentially more avocado related injuries than gunshot wounds in Australia. I think this basically sums up our whole culture.

The Port Arthur massacre in Australia claimed 35 lives. Gun safety laws changed that forever. The Australasian College for Emergency Medicine joined Gun Control Australia to lobby for those changes. #ThisISMyLane How many more massacres will it take before @NRA understands

Similar sentiments were expressed by doctors from Denmark, the UK, even one who worked in a guerilla zone in Colombia.

If mental illness is the root cause of gun violence, I propose we study England, Australia, Canada, and Japan who have all seemingly cured mental illness in their countries.

Or we can be honest and just admit that it’s the fucking guns.#ThisisMyLane #FuckTheNRA

Despite the success of Australia’s firearms reforms, which at the time received bipartisan support, the pro-guns lobby is attempting to flex its electoral muscle once more, splurging on the upcoming Victorian state election and eyeing other polls.

The Australian Medical Association joined the NRA backlash to stress its support for stringent gun controls and oppose any watering down of policy:

Doctors see the damage and trauma, caused by guns, whether through accidental or intentional misuse. The AMA strongly opposes any campaigns or policies that seek to relax firearm restrictions #ThisISOurLane #ThisisMyLane https://t.co/TfRNYaMPIw

@acemonline support from ACEM….in Australia and New Zealand, our gun laws work. In 20 years in ED, I reckon I’ve seen 4 or 5….none fatal. I would fight any change which threatened this..

We’ve only published a selection of the many thousands of #ThisIsMyLane tweets, which are worth reading and reflecting upon.

The Health Wrap: diverse public health matters, as well as some troubling news and glorious views from the United States

Will the latest shooting of US children finally lead to gun reform? Sadly, that’s unlikely