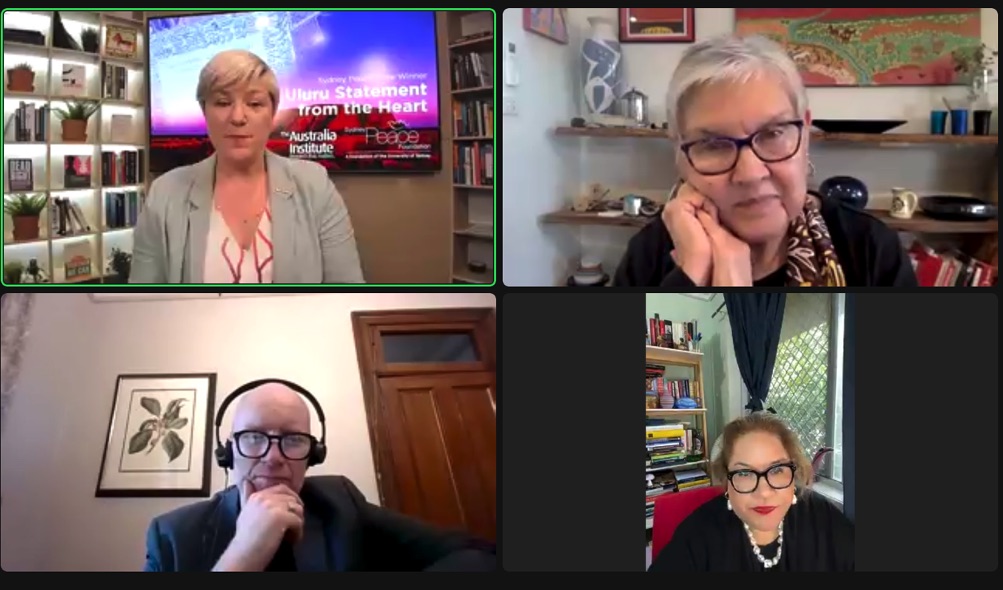 This article was first published on Wednesday, August 3, 2022

Introduction by Croakey: In his speech to the Garma Festival on 23 July, Prime Minister Anthony Albanese said his Government would approach implementation of the Uluru Statement from the Heart and the work of constitutional change “with humility and with hope”.

Humility was necessary, he said, acknowledging “over 200 years of broken promises and betrayals, failures and false starts”, and so many times when “the gap between the words and deeds of governments has been as wide as this great continent”.

But he also brought hope in recognition of peoples’ “abilities as advocates and campaigners, as champions for this cause” and because “I believe the tide is running our way. I believe the momentum is with us, as never before. I believe the country is ready for this reform”.

Albanese said enshrining a Voice in the Constitution gives the principles of respect and consultation, strength and status, and would mean “a willingness to listen won’t depend on who is in government or who is Prime Minister”.

“The Voice will exist and endure outside of the ups and downs of election cycles and the weakness of short-term politics. It will be an unflinching source of advice and accountability,” he said, “with the perspective and the power and the platform to tell the government and the parliament the truth about what is working and what is not…because a Voice enshrined in the Constitution cannot be silenced.”

As has been widely reported, Albanese proposed adding three sentences to the Constitution, in recognition of Aboriginal and Torres Strait Islanders as the First Peoples of Australia:

The Prime Minister also proposed presenting the Australian people with the clearest possible referendum question, such as: Do you support an alteration to the Constitution that establishes an Aboriginal and Torres Strait Islander Voice?

Of course, many people have many questions about these proposals; today more than 2,000 people tuned into a webinar hosted by the Australia Institute with the 2021-22 Sydney Peace Foundation prize winners, Uluru Statement from the Heart.

Participants heard from Pat Anderson AO, Alyawarre woman and former chairperson of the Lowitja Institute, and Professor Megan Davis, a Cobble Cobble woman and Pro Vice-Chancellor Indigenous and Professor of Law at the University of New South Wales, who have been central in driving the Uluru Statement from the Heart campaign.

With a referendum now on the table, Anderson sent a clear call for Australians to “actively engage mind and heart in this process”.

Croakey managing editor Alison Barrett live-tweeted the webinar, as summarised below. Also see a transcript of the discussions.

Pat Anderson AO told webinar participants that the Sydney Peace Prize – to be presented on 10 November – was a tribute for everyone who was involved in the regional Dialogues that resulted in the National Constitutional Convention at Uluru in 2017.

The Uluru Statement from the Heart was recognised with the 2021-22 Sydney Peace Foundation prize “for bringing together Australia’s First Nations Peoples around a clear and comprehensive agenda; for healing and peace within our Nation and delivering self-determination for Aboriginal and Torres Strait Islander peoples, that enables Australia to move into the future united and confident.”

Chair of the Sydney Peace Foundation, Archie Law, asked the audience to go beyond just listening today – and to also talk to friends, colleagues and take action.

Pat Anderson AO discussed the process of the Uluru Statement, saying that while it officially began about 12 years ago, “every generation of us has had a go at being acknowledged and accepted and respected as the First Peoples of this beautiful continent of ours” since the 1840s.

Thirteen regional Dialogues took place where First Nations people were asked how they wanted to be recognised and represented.

The initial process about recognition included speaking with mob and engaging local communities to find out what recognition meant to them, Professor Megan Davis told participants.

Each meeting was recorded and analysed to determine the main priorities.

From the discussions, an enshrined Voice to Parliament was found to be the highest priority.

Davis said comments that came from the Dialogues with First Nations peoples included “they are voiceless”, “they are powerless” and “nobody represents their voice”.

This is why the Voice to Parliament is so important to Aboriginal and Torres Strait Islander people. They want their views represented in Parliament, Davis said.

Davis discussed the three main objectives of the Uluru Statement – Voice to Parliament, Treaty and Truth-telling.

The main reason a Voice to Parliament is required first is that it requires amendments to the Australian Constitution which can only be changed via a referendum, she said. Treaty and truth-telling don’t require Constitutional change.

The sequence of implementing the Uluru Statement is really important. We can see from Canada’s experience that they have undergone four substantial truth-telling processes with no significant change, according to Davis.

Having an Indigenous Voice to Parliament is a notion of recognition in the Constitution, and all about removing First Nations people as a “political football”, Davis said.

The Voice enables a provision that sets up recognition in the Constitution. It will be done after comprehensive consultation, or deliberative dialogue, which is the term Davis prefers, and then a referendum to be recognised.

What has to happen now and what will happen? It is going to be difficult, Anderson told participants.

Education about the Statement will continue around the country, but now we have the Referendum on the table, we’re going to ask Australians to help us, because “it’s you who can change the narrative”.

While the politicians can “build the machinery for change”, it’s the Australian public who can make change, according to Anderson.

This is part of nation-building and changing the narrative. It will enable us to have some power to make decisions about things that impact us – “To fix the torment of our powerlessness”, she said.

Anderson calls for Australians to “actively engage your mind and heart in this process”. 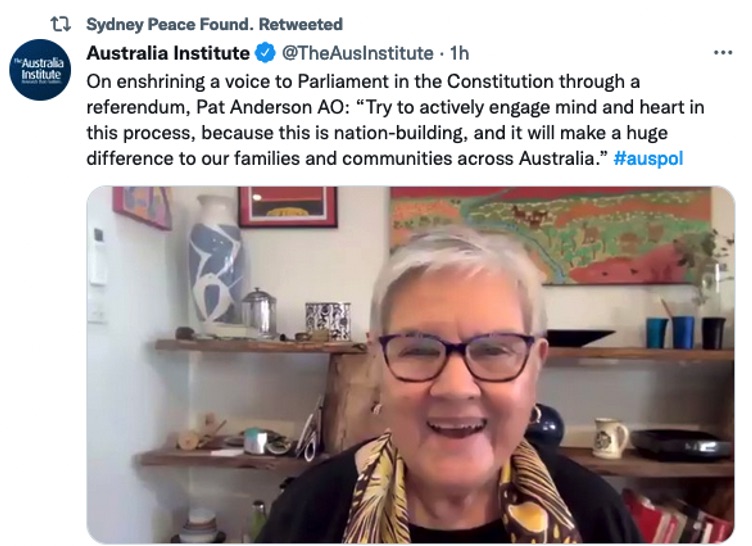 Media and the no campaign

“We expect there to be pushback. But I think one thing we need to keep in mind is that this is not the Republic referendum,” Davis said. There’s a lot of people who use the language of a no campaign and they might not even be in that campaign, it’s used in a metaphorical sense.

Davis said it was important to pay attention to the “ways in which this debate is being driven and manufactured by mainstream media”.

She acknowledged that “most Australians aren’t paying attention right now” and “the mainstream media haven’t paid attention” to the work from the last 11 years.

Davis told participants that this doesn’t have to be adversarial or racist. It can be just a decent conversation with Australians about why we seek recognition.

First Nations people have copped bad outcomes from “crappy policies and really crappy laws,” she said, “because we’re never at the table when they make decisions about us”.

“I don’t want to be Pollyanna here, but I think there is a shift. In the 2022 election, Australians voted for hope and change. I think this is the best chance we’ve had in a long time,” Anderson said.

The webinar was presented with Australia Institute polling showing support for the Voice increased between June and July. 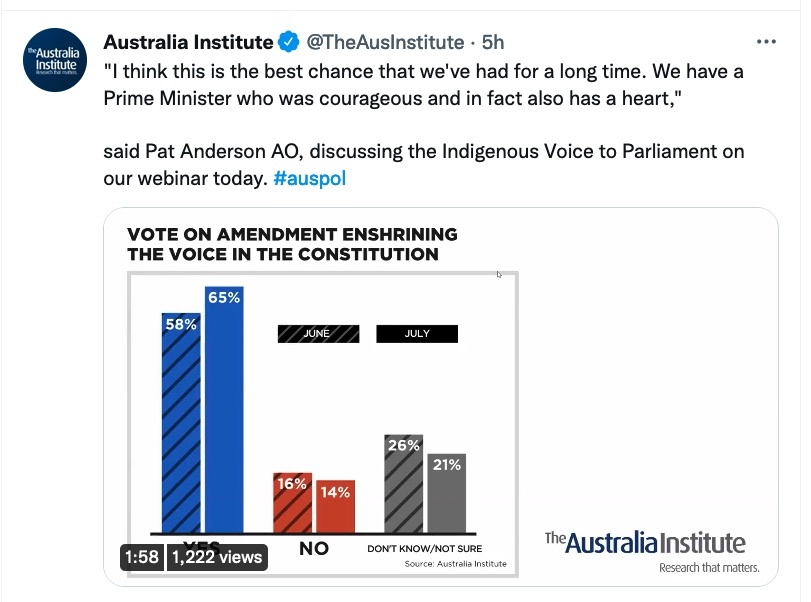 Davis said the most important discussion we need to have is about recognition. At the end of the day, it’s Australian people standing alongside Aboriginal and Torres Strait Islander people.

“Women are leading this process” and we have done from day one, said Pat Anderson. The dialogues included a mix of men, women and young people.

Anderson, Davis and the Uluru Statement team will be travelling the country to speak with as many people as they can.

Their final message from the webinar: believe Australian can be a better place. Now is the time.

“The stars are in alignment, we have a leader who is supportive,” Davis said. “If we can get the Uluru Statement across the line, we will be honouring our Elders.” 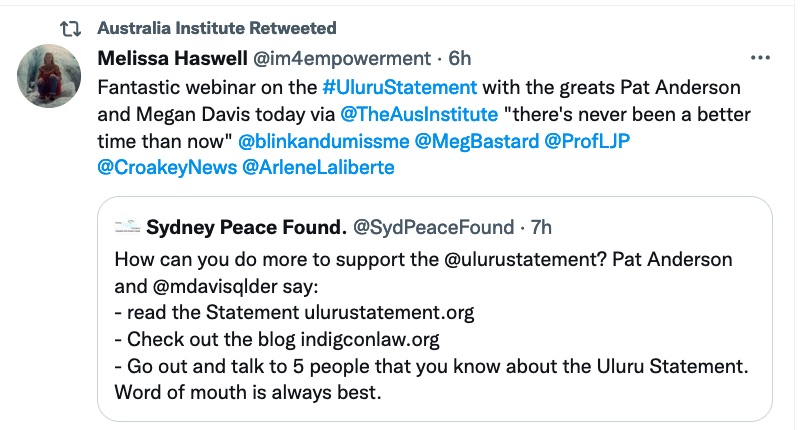 Croakey thanks and acknowledges donors to our public interest journalism funding pool who have helped support this post.