Far too much of Australians’ diet comes from foods that have virtually no nutrients. Credit: shutterstock.com, via The Conversation

Three charts on: how and what Australians eat (hint: it’s not good)

These are some of the findings from the Nutrition across the life stages report released by the Australian Institute of Health and Welfare today [26 October].

The report also shows physical activity levels are low in most age groups. Only 15% of 9-to-13-year-old girls achieve the 60-minute target. The prevalence of overweight and obesity remains high, reaching 81% for males aged 51–70.

The food intake patterns outlined in this report, together with low physical activity levels, highlight why as a country we are struggling to turn the tide on obesity rates.

Read more: Fat nation: the rise and fall of obesity on the political agenda

Not much change in our diets

The report shows little has changed in Australians’ overall food intake patterns between 1995 and 2011-12. There have been slight decreases in discretionary food intake, with some trends for increased intakes of grain foods and meat and alternatives. 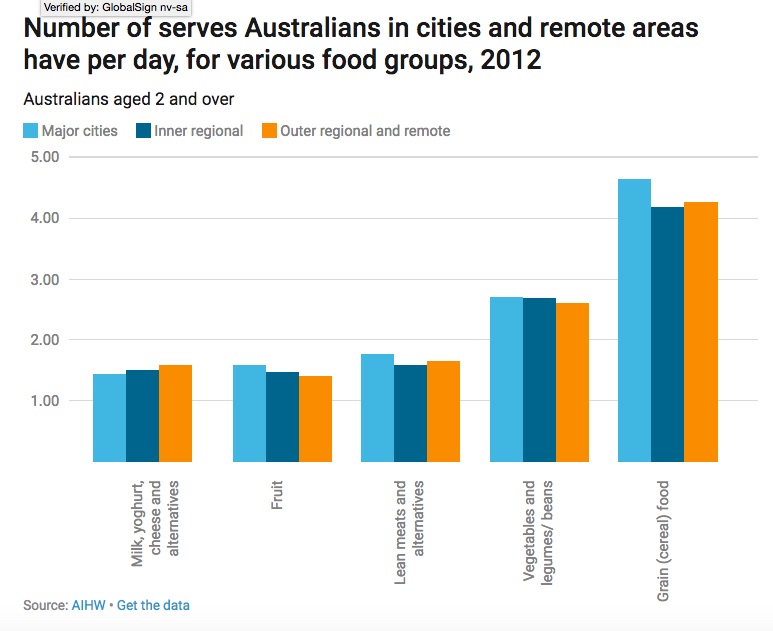 Australians are consuming around four serves of grains, including breads and cereals, compared to the recommended three to seven serves. 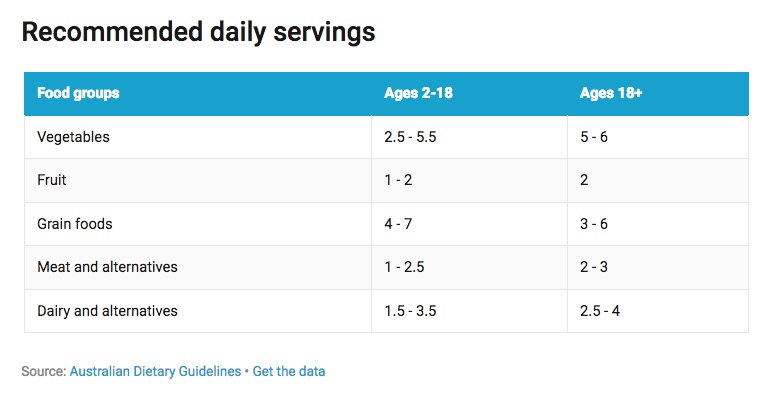 Read more: Food as medicine: why do we need to eat so many vegetables and what does a serve actually look like?

The data show a trend of lower serves of the five food groups in outer metro, regional and remote areas of Australia. Access to quality, fresh foods such as vegetables at affordable prices is a key barrier in many remote communities and can be a challenge in outer suburban and country areas of Australia.

There was also a 7-10 percentage point difference in meeting physical activity targets between major cities and regional or remote areas of Australia. Overweight and obesity levels were 53% in major cities, 57% in inner regional areas and 61% in outer regional/remote areas.

The CSIRO Healthy Diet Score compares food intake to Australian Dietary Guidelines. You can use these to see how your diet stacks up and how to improve.

not needed to meet nutrient requirements and do not fit into the Five Food Groups … but when consumed sometimes or in small amounts, these foods and drinks contribute to the overall enjoyment of eating. 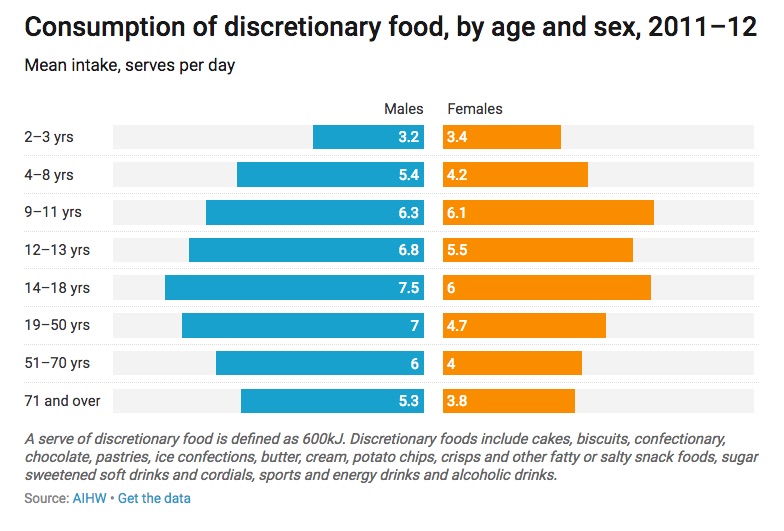 A serve of discretionary food is 600kJ, equivalent to six hot chips, two plain biscuits, or a small glass of wine. The guidelines advise no more than three serves of these daily – 0.5 serves for under 8-year-olds.

Since 1995, the contribution of added sugars and saturated fat to Australians’ energy intake has generally decreased. This may be a reflection of the small decrease in discretionary food intake seen for most age groups.

But across all life stages, discretionary food intakes remain well in excess of the 0-3 serves recommended. Children at 2-3 years are eating more than three servers per day, peaking at seven daily serves in 14-to-18-year-olds. The patterns remains high throughout adulthood, still more four serves per day in the 70+ group.

The excess intake of discretionary foods is the most concerning trend in this report. This is due to the doubleheader of their poor nutrient profile and being eaten in place of important, nutrient-rich groups such as vegetables, whole grains and dairy foods.

Our simulation modelling compared strategies to reduce discretionary food intake in the Australian population. We found cutting discretionary choice intake by half or replacing half of discretionary choices with the five food groups would have significant benefits for reducing intake of energy and so-called “risk” nutrients (sodium and added sugar), while maintaining or improving overall diet quality. 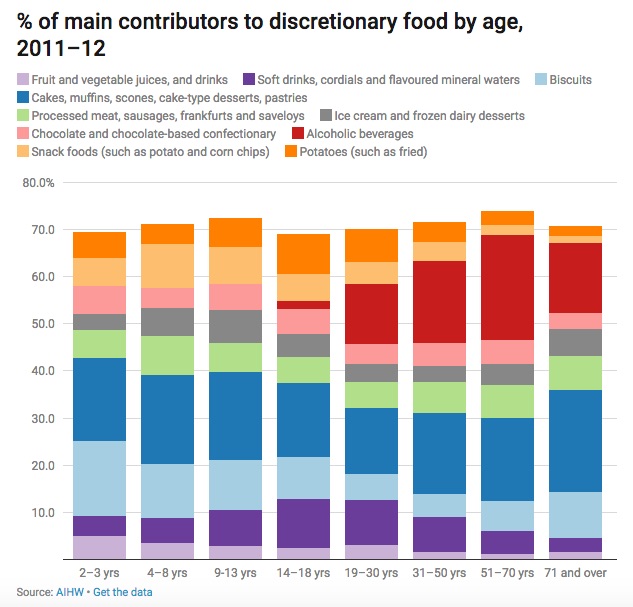 For adults aged 51–70, alcoholic drinks account for more than one-fifth (22%) of discretionary food intake. Alcohol intake in adults aged 51-70+ has increased since 1995. This age group includes people at the peak of their careers, retirees and older people. Stress, increased leisure time, mental health challenges and factors such as loneliness and isolation would all play a part in this complex picture.

Read more: Four ways alcohol is bad for your health

Young children have small appetites and every bite matters. The guidelines suggest 2-to-3-year-olds should have very limited exposure to discretionary foods. In, studies the greatest levels of excess weight are seen in preschool years.

• Rebecca Golley is Associate Professor (Research) Nutrition and Dietetics, Flinders University. This article was first published at The Conversation.