Image courtesy of The Conversation

Three charts on: the NBN and Australia’s digital divide

Let’s spend billions of dollars widening the social, economic and health gap between people who are already quite privileged and those who are not so well off.

Is that what we’re doing with the National Broadband Network (NBN)?

OK, that may be a touch hyperbolic but the article below suggests there is mounting evidence that the NBN rollout is more likely to exacerbate than alleviate health inequities.

And there are other reports of variable access to the NBN within regions (see the tweet below from former MP Tony Windsor about differential access in regional NSW, responding to these concerns about inequitable access in Bendigo, relative to other regional centres in Victoria).

The article below is by researchers from the Centre for Research Excellence in the Social Determinants of Health Equity and was first published at The Conversation.

The National Broadband Network (NBN) is widely considered to be failing Australians, but it isn’t failing them equally.

Our research, undertaken at the Centre for Research Excellence in the Social Determinants of Health Equity, seeks to address health inequities by looking at the geographical distribution of infrastructure, including digital technology.

Across Australia, we found only 29% of areas with a SEIFA decile of one (the lowest-scoring 10% of areas) had fibre-to-the-premise (FTTP) – considered the best broadband technology solution available – or fibre-to-the-node (FTTN) connections. So far, around 71% of the NBN technology available in these areas involves inferior options, including hybrid fibre-coaxial (HFC), fixed wireless or satellite technologies. 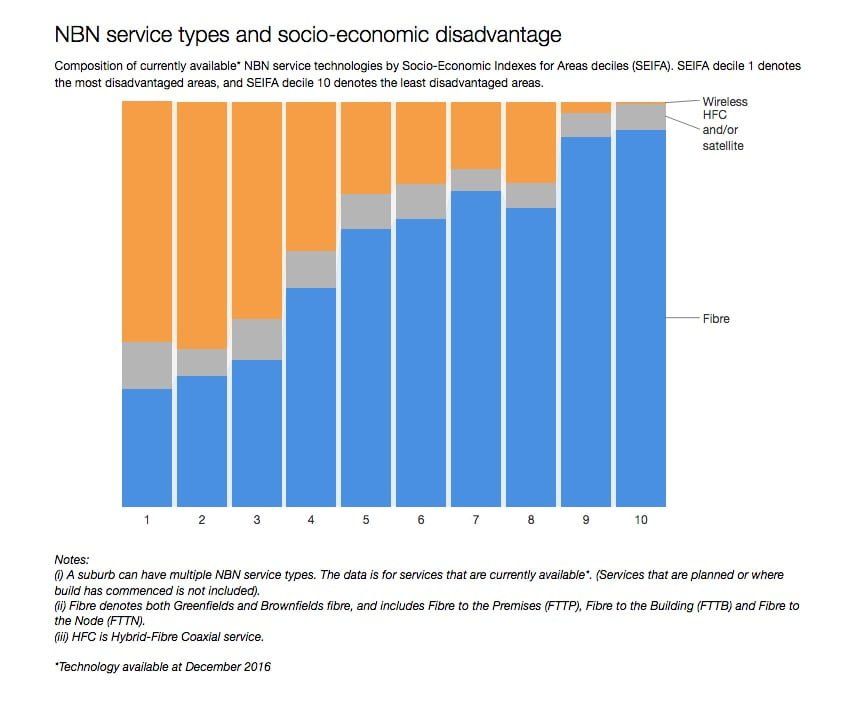 This result tells a similar story to an early analysis by Sydney University’s Tooran Alizadeh of 60 NBN release sites that were announced in 2011. She found some of the most disadvantaged areas of Australia were not gaining equal access to the new infrastructure. 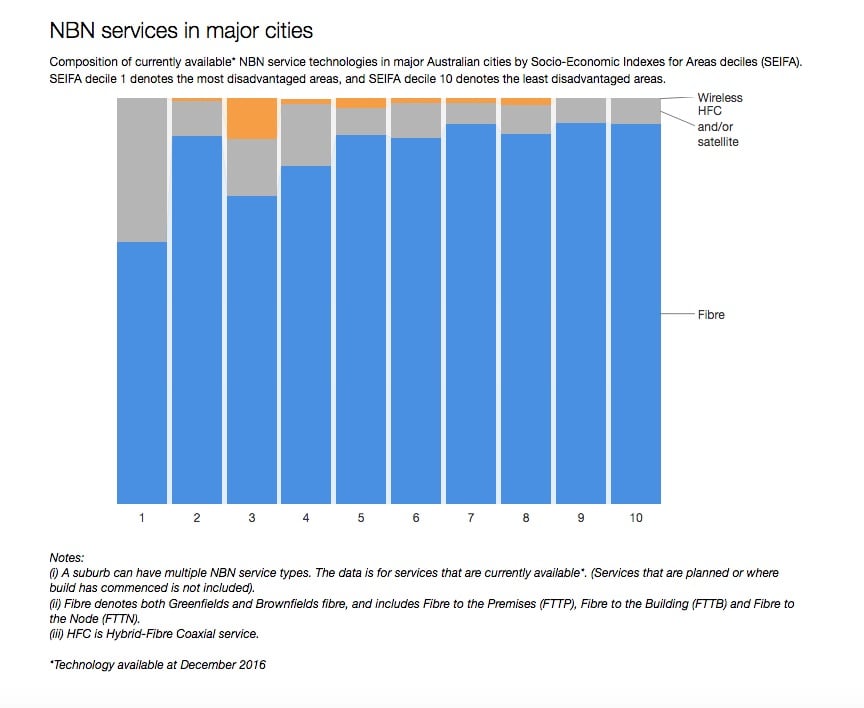 Of course Australia is a large, sparsely populated country, which makes the business case for rolling out fibre difficult in some regions. Nevertheless, inequitable access to NBN technology appears even when controlling for the remoteness of the location.

Receiving FTTP or even FTTN may still be better than receiving HFC, fixed wireless or satellite technologies. While HFC may be able to match maximum speeds of FTTN, this is unlikely to happen during peak times when the increased number of users sharing the same data capacity will slow service considerably. And, similar to FTTN, these technologies provide fewer opportunities to upgrade capacity to meet future demand.

However, given only a limited data set was made publicly available in December 2016 by the NBN company, it is difficult to determine exactly which services are currently installed where. For example, the data set we used does not differentiate between FTTP and the lesser FTTN connection.

It also aggregates some NBN technology into an “other” category, making it impossible to distinguish between HFC and satellite service.

The NBN company offers a “check your address” search for its most up-to-date rollout information including technology type, but was unable to share this information with us in a single, usable data set.

A NBN spokesperson said the network was being rolled out across Australia regardless of any socio-economic mapping.

“Determining the sequence is a complex process of weighing up factors including the location of construction resources, current service levels, existing broadband infrastructure, growth forecasts and proximity to nbn infrastructure such as the transit network,” she said in an email. “Only 8 per cent of premises in Australia are not in the fixed-line footprint.”

This was raised in a 2011 report by the parliamentary Standing Committee on Infrastructure and Communications. It emphasised the potential role of the NBN in enhancing greater equity in digital access to services in regional and rural areas.

The Committee heard that, due to the ‘digital divide’, many of the Australians who could benefit the most from broadband currently have the lowest levels of online participation … The extent of accompanying measures implemented by governments will determine whether the NBN narrows or widens this digital divide.

Previous research has also found that people from lower socioeconomic groups are already restricted in their use of digital information and communication technologies. This can limit their access to a range of social determinants of health.

When populations already facing disadvantage receive poorer quality digital infrastructure, those with the greatest need will continue to slip farther behind.

Equity must be at the forefront of the NBN company’s considerations as it continues to roll out across Australia. Further entrenching social inequities through digital infrastructure is not the NBN anyone dreamed of.