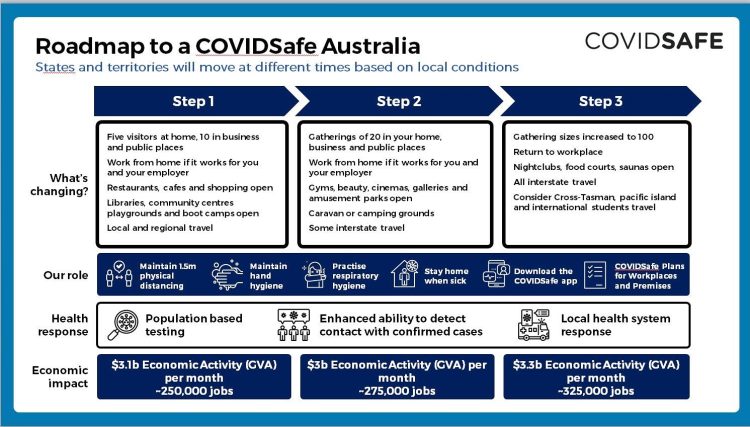 Evidence about the higher risks of coronavirus transmission among crowds and indoors have guided the development of a three stage “roadmap to a COVIDSafe Australia” unveiled on Friday by Prime Minister Scott Morrison, according to Chief Medical Officer Professor Brendan Murphy.

The COVID-safe roadmap (its name an uncanny resemblance to that of the #COVIDsafe app being heavily pushed by the Australian Government) was outlined after a much-awaited National Cabinet meeting.

Special arrangements will need to be continued in remote Aboriginal communities that have been closed under the Biosecurity Act and for vulnerable groups, the government said without expanding.

According to the Prime Minister’s statement:

The aim is “to get Australia working again” in July, Morrison said, urging that “we cannot be too timid” and need to come out “from under the doona”. 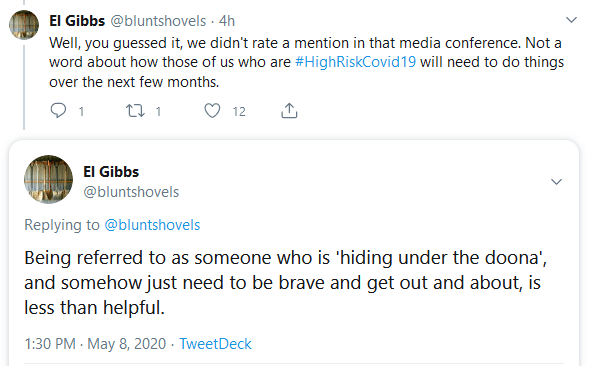 Morrison gave a resounding ‘yes!” when asked at a media conference if Australians, and importantly states and territories, “will have to hold their nerve” and not be tempted back into restrictions in the event of outbreaks and clusters like we have seen in recent weeks in Victoria, New South Wales and Tasmania.

But it’s clear, as the Prime Minister signalled, that the types and pace of restrictions being lifted will differ significantly in each state and territory, and he said movement from one step to the next will depend on three criteria that has governed Australia’s response to date, which he categorised as “testing, tracing, trapping”.

“Those criteria again – that the medical evidence suggests that further easing would not present an undue risk, that widespread testing is adequately identifying community transmission, and thirdly, public health actions are able to trace cases and trap local outbreaks,” he said.

(You can watch the Prime Minister’s announcement here, read this Twitter thread, or read the full transcript). Here too, thanks to disability advocate El Gibbs (see tweet above) is a link to accessible information.

South Australia, one of six states and territories to have had zero cases for multiple days, leapt quickly into action, not just permitting intrastate tourism but encouraging it.

Premier Steven Marshall urged South Australians to get out and spend money in “our beautiful backyard” and announced that limited face to face university and TAFE classes and outdoor dining would begin from Monday. Queensland has also announced a detailed staged easing – see more details on both below.

By comparison, Victoria and New South Wales, managing outbreaks – at a meat processing plant in Melbourne and the Newmarch aged care facility in Sydney – which together have made up 50 per cent of total Australian cases in the past week, are likely to go slower.

Victoria, which has taken a “go hard go early” stand from the start, won’t announce any move until Monday, when more results of its massive 100,000-plus two-week testing blitz have come in. New South Wales also held off from any detailed announcements.

But Victorian Premier Daniel Andrews signalled caution, saying Victorians should plan for all of Term 2 education to be at home, and warning “this is a pandemic, this is not a popularity contest”.

Tasmania later announced its roadmap, with Premier Peter Gutwein saying the state would “keep marching to the beat of our own drum, and our pathway back will be gradual, careful, and always based upon the health advice we have at that time”.

Its stage one will begin with small steps around aged care visits, funerals, TAFE classes and national park visits on Monday and roll back additional restrictions through to June, but border restrictions will remain in place in Stage 3 in July, except that from mid May Tasmanian residents can quarantine in their principal residence if it is suitable;

Asked what guided the development of the three stages for the national roadmap, Chief Medical Officer Professor Brendan Murphy said many of the elements of each step are arbitrary, but based around evidence that there is “an absolute risk about gathering size” – he noted 35 people infected at just one wedding – and that “most transmission is occurring indoors”.

“There is necessarily an arbitrariness about this, and in Step 1 there are things that could have been included that weren’t, on the basis that we want to keep it gentle and careful,” he said.

“Step 1 is tentative, baby steps into normalisation. If everything goes well, if we don’t have big outbreaks, Step 2 could be more confident.”

See below for the pathways announced today (including this difficult to read Australian framework: click on the image for an enlarged version or here for higher res). 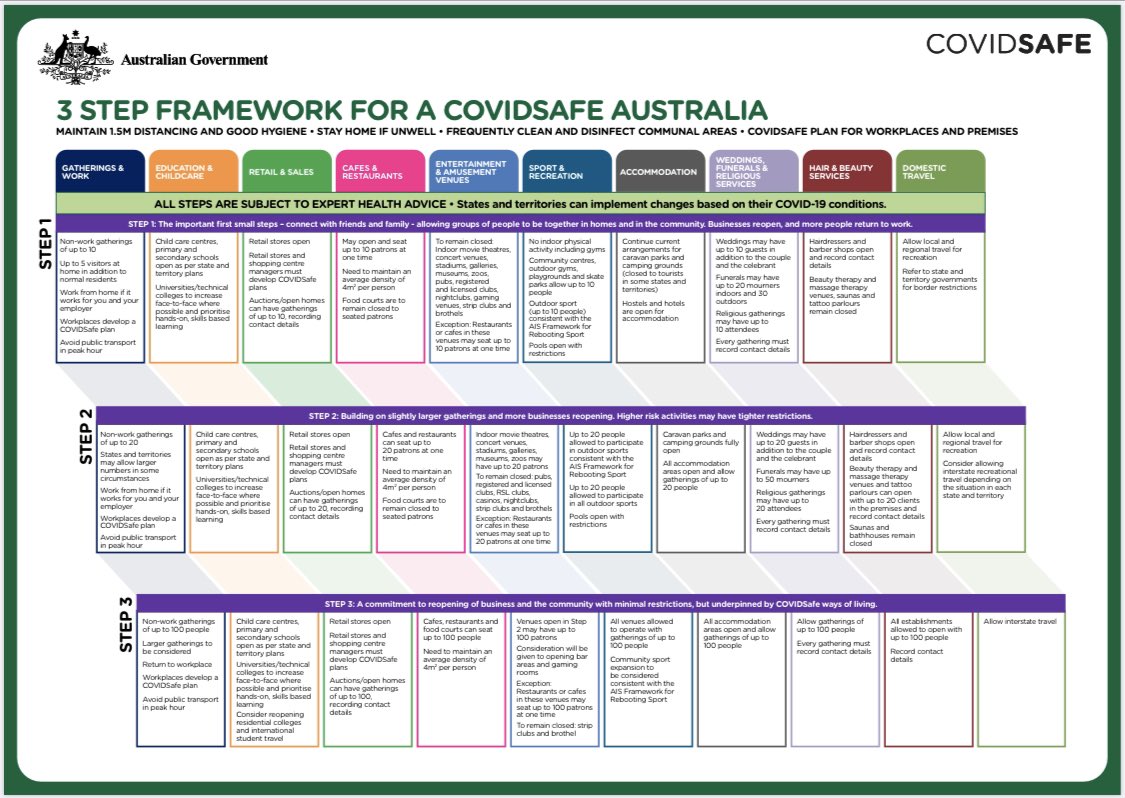 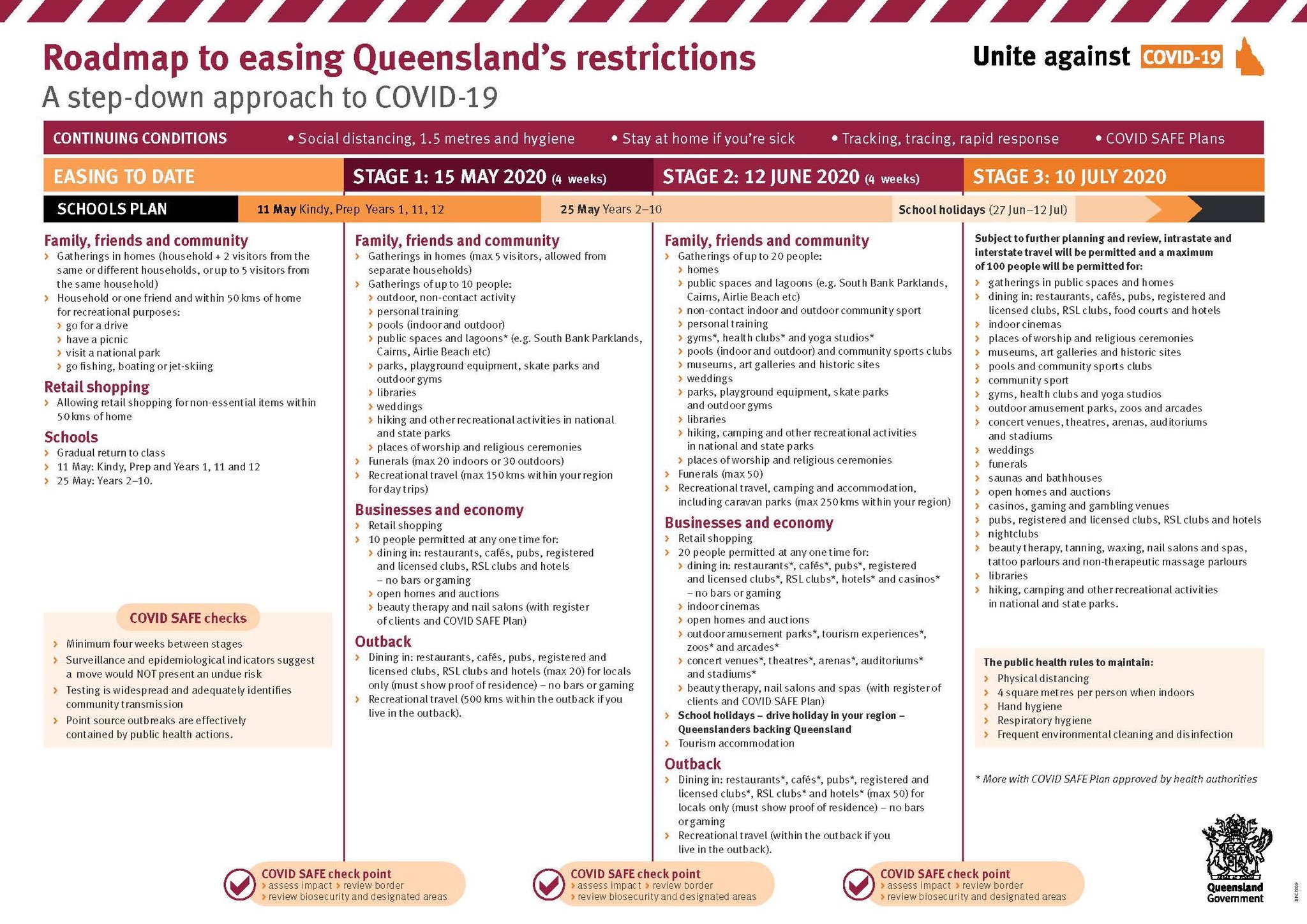 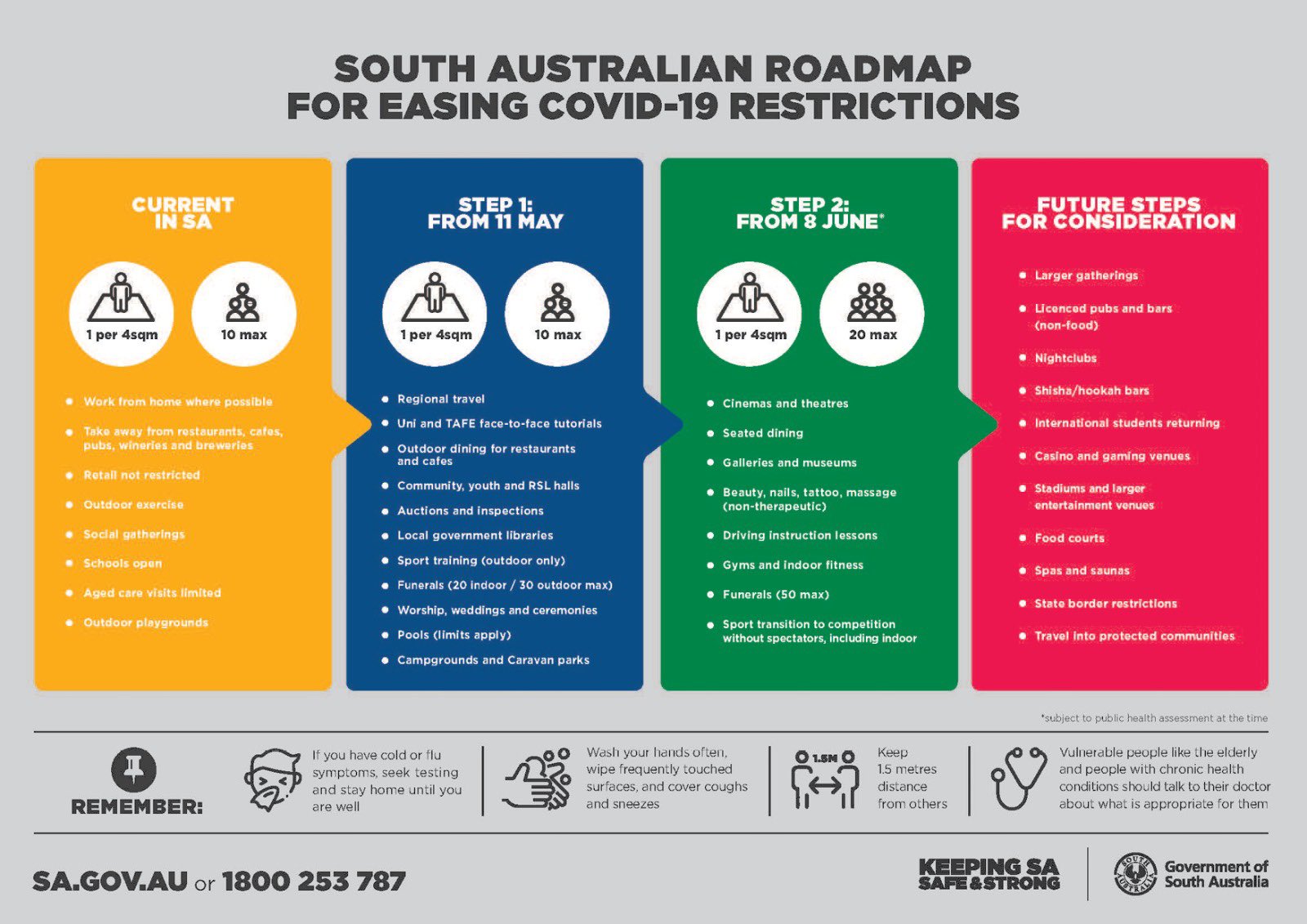 The Prime Minister said National Cabinet also committed – as part of the three-step plan – to regular reviews and stocktake assessments of progress every three weeks.

“The AHPPC and National Cabinet were very firm on this. We are prepared for an increase in case numbers or possible outbreaks, but relapse should not be an option. A second wave is not something we can afford to go through. The cost to our people, our economy, our social fabric, is too high,” he said.

“National Cabinet’s goal is to have a sustainable COVID safe Australia in July 2020.”

Responses from the health sector

In an early response, the Australian Medical Association commended the National Cabinet for “continuing to listen to expert medical advice by proposing a cautious, phased, and gradual lifting of COVID-19 restrictions”.

But president Dr Tony Bartone urged an early return for elective surgery and said too many patients have stopped seeing their doctor and it is time for them to return for their usual care diagnoses and treatment resumed.

“Private elective surgery, in particular, needs to get going again,” he said in a statement.

“If elective surgery continues to be deferred, we risk a build-up of untreated conditions. The lifting of restrictions signals that it is appropriate to expand private elective surgery so patients can get the treatment they need. 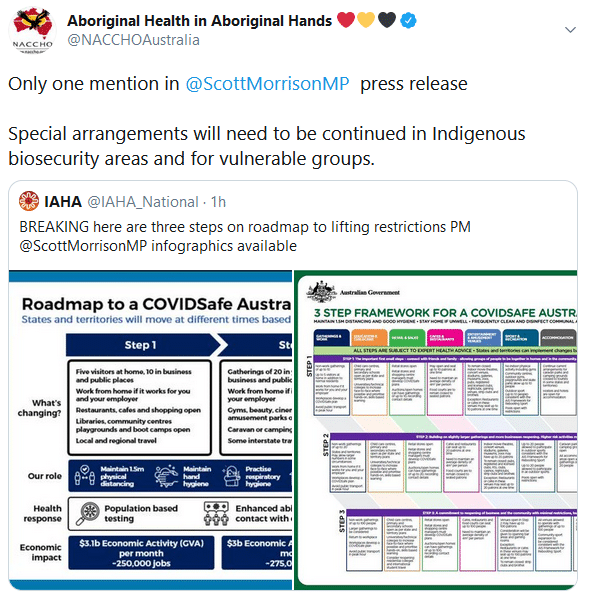 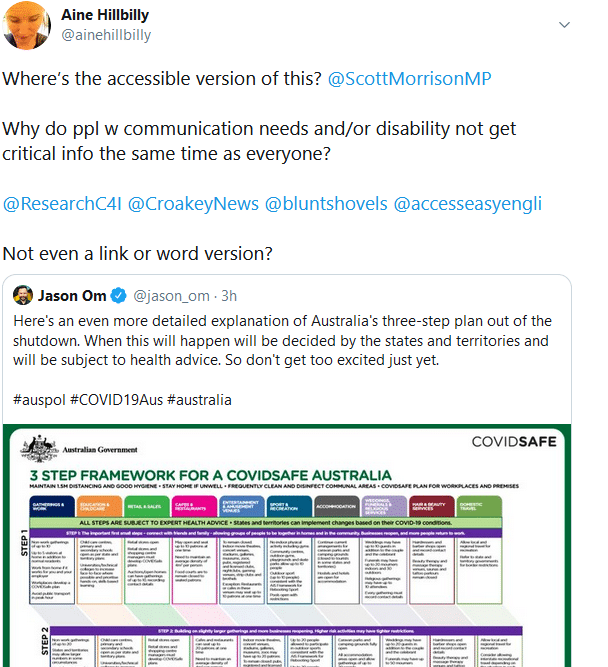 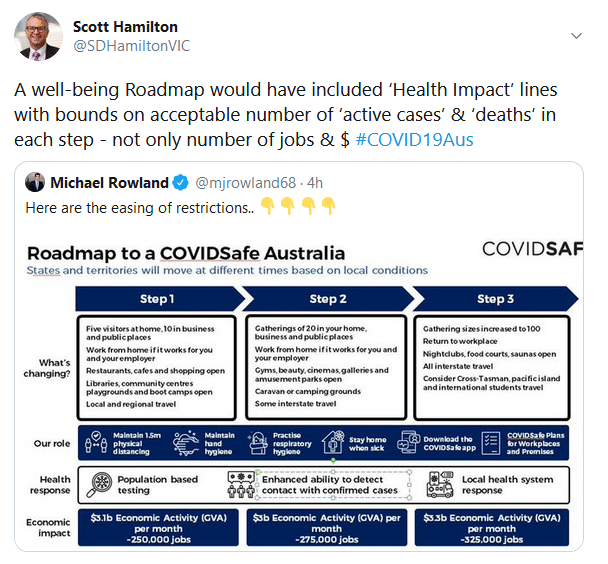