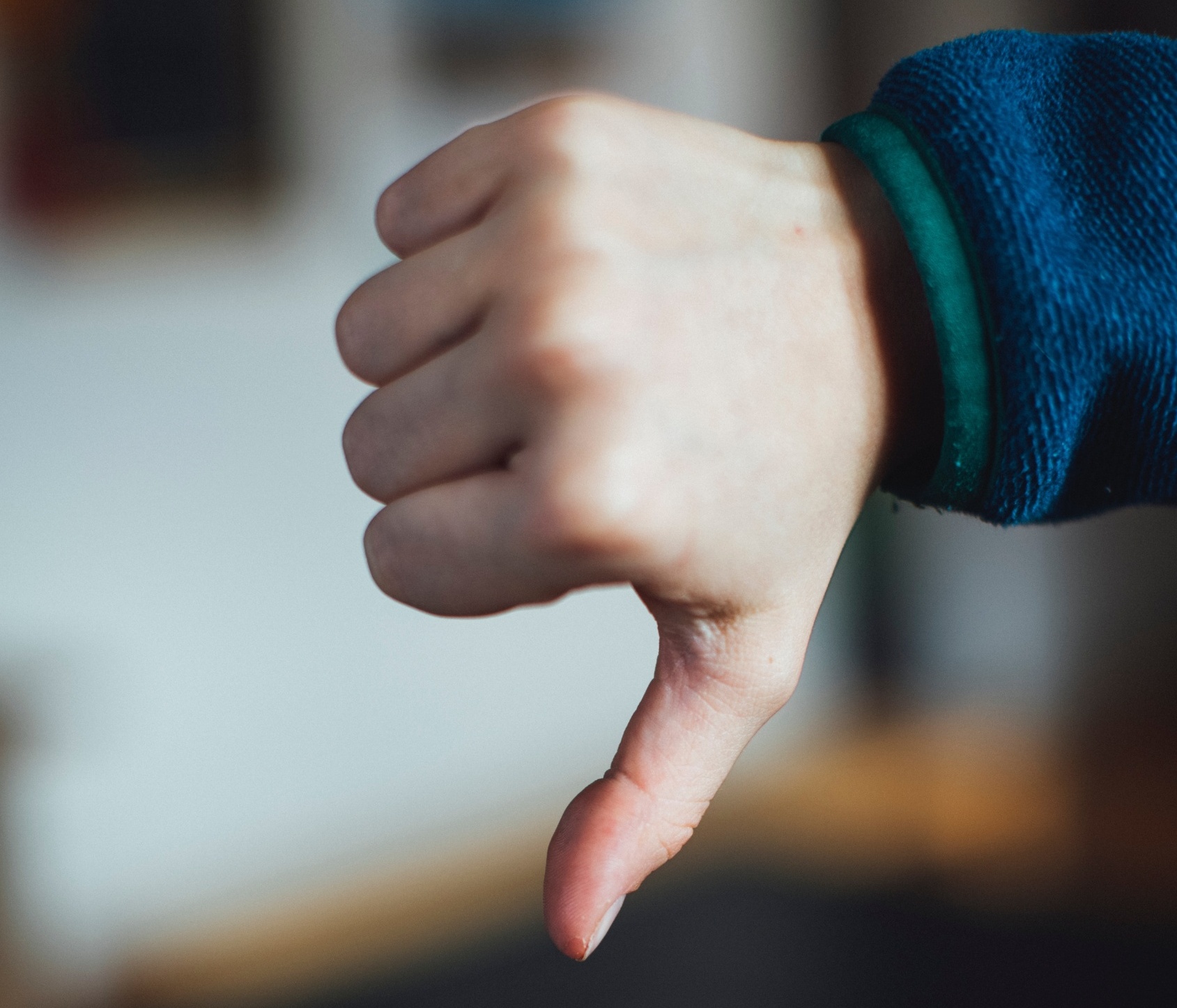 The announcement garnered support from the Royal Australasian College of Physicians and public health nutritionist Dr Rosemary Stanton AOM, as well as the Obesity Policy Coalition.

“We should not be relying on processed food companies to develop and oversee sham controls that fail to protect our children’s health,” Martin writes, highlighting flaws in a recently updated advertising code.

Last November, the Australian Association of National Advertisers announced new rules to reduce advertising of unhealthy food and drinks to children under 15 including on TV. They claimed the new Code “represents more stringent protections for children”.

They trumpeted that companies could only advertise unhealthy foods when the proportion of children under 15 years was 25 percent or less of the total viewing audience. The previous threshold was 35 percent or less.

But a recent complaint lodged by the Obesity Policy Coalition (OPC) to Ad Standards revealed that the new Food and Beverages Code deserves an F for fail.

An Oreo cookies ad shown during the Lego Masters finale on free-to-air commercial TV was found not to target children despite this show being one of Australia’s most popular general entertainment shows with children.

The advertising industry’s Ad Standards Community Panel found that the ad did not target children, because under 15 year olds made up 17 percent of the audience, below the threshold of 25 percent, and despite the high numbers of children watching.

Between July 2021 and June 2022, Lego Masters episodes were rated as seven out of the top 10 general entertainment commercial TV programs for audiences 12 years old and younger – with between 112,275 and 168,000 viewing each episode.

If a popular commercial program that rates highly with children doesn’t meet the test for targeting children, then the test is flawed. This demonstrates what happens when industry is left to write their own rules and oversee the system.

Food advertisers are estimated to spend more than $550 million on advertising food and (non-alcoholic) drinks in Australia, mainly for unhealthy processed foods. An average child aged between five and eight years old who watches about 80 minutes of television per day is exposed to 827 advertisements and four hours of unhealthy food advertising each year on free-to-air television.

The National Preventive Health Strategy and the National Obesity Strategy recognise the detrimental impact that this marketing has on children’s diets, recommending that marketing is restricted to protect children across a range of media platforms.

Currently, Australian governments have no formal standards for protecting children from exposure to unhealthy food marketing. Instead, the processed food and advertising industries have been left to design and oversee flawed codes which provide the veneer of protection and act to stave off government intervention.

All Australian children should be able to watch their favourite TV shows, go online, learn and play in their community without being bombarded by unhealthy food marketing.

The Obesity Policy Coalition has launched a platform, Brands off our kids!, calling for the Federal, State and Territory governments to set higher standards to protect children from the processed food industry’s unhealthy food marketing.

The campaign calls for four actions to protect children:

We have been joined by thirty-eight public health, consumer and community groups, together with hundreds of individuals, who support action by government to stop unhealthy food marketing seen by children.

The decision by Ad Standards in this case gives a green light to the processed food industry to continue to market in high rating TV programs most popular with children. It illustrates that the updated industry code remains fundamentally flawed. We should not be relying on processed food companies to develop and oversee sham controls that fail to protect our children’s health.

We would love you to join us in our calls for action through Brands off our kids! and amplify our four actions for governments to support a childhood free from unhealthy food marketing. The time to act is now.

Jane Martin is Executive Manager of the Obesity Policy Coalition (OPC) and Alcohol and Obesity Programs, Cancer Council Victoria. She has worked in public health advocacy, engaging in tobacco control, alcohol policy and obesity prevention for more than three decades.

Follow the hashtag #Brandsoffourkids for more discussions on the campaign. 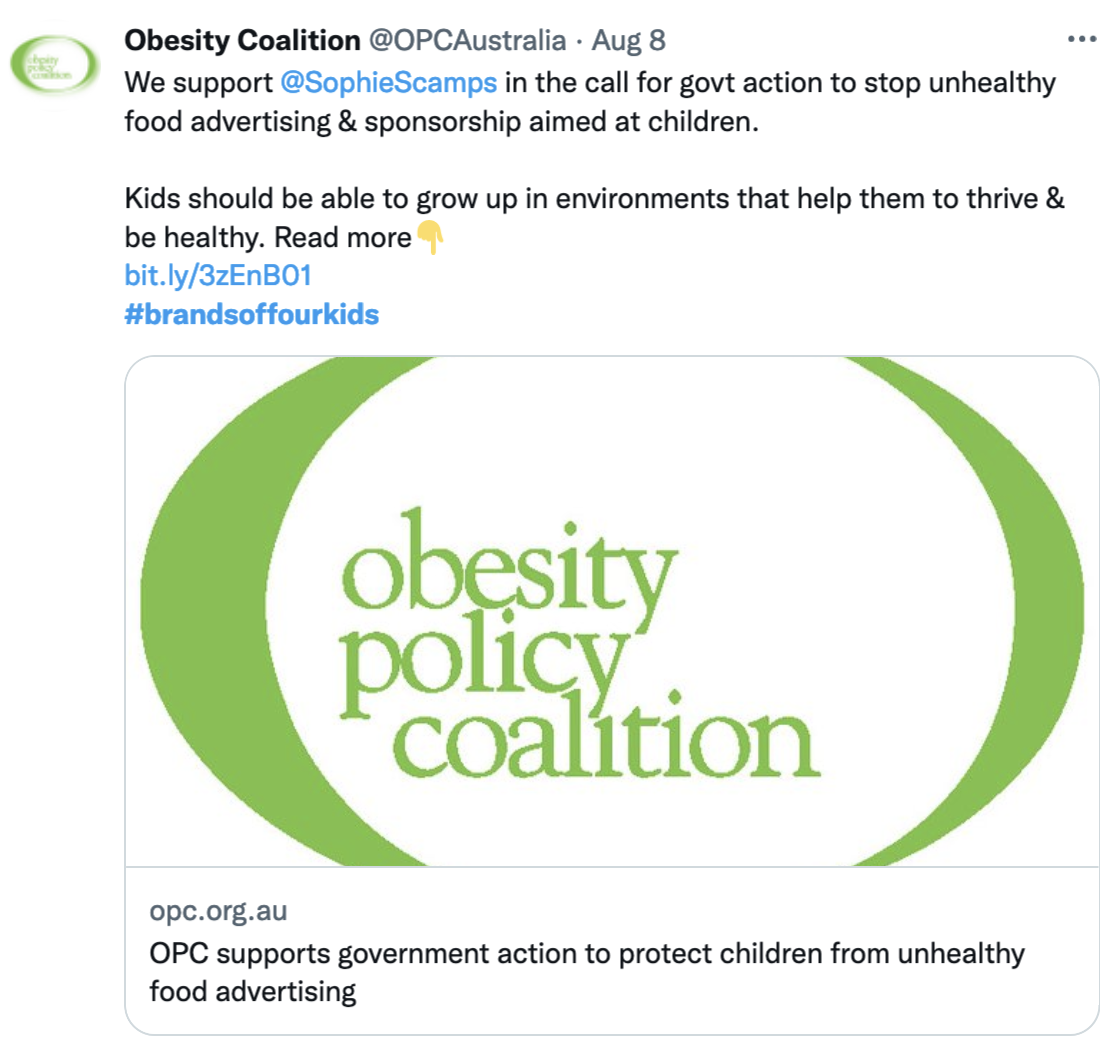 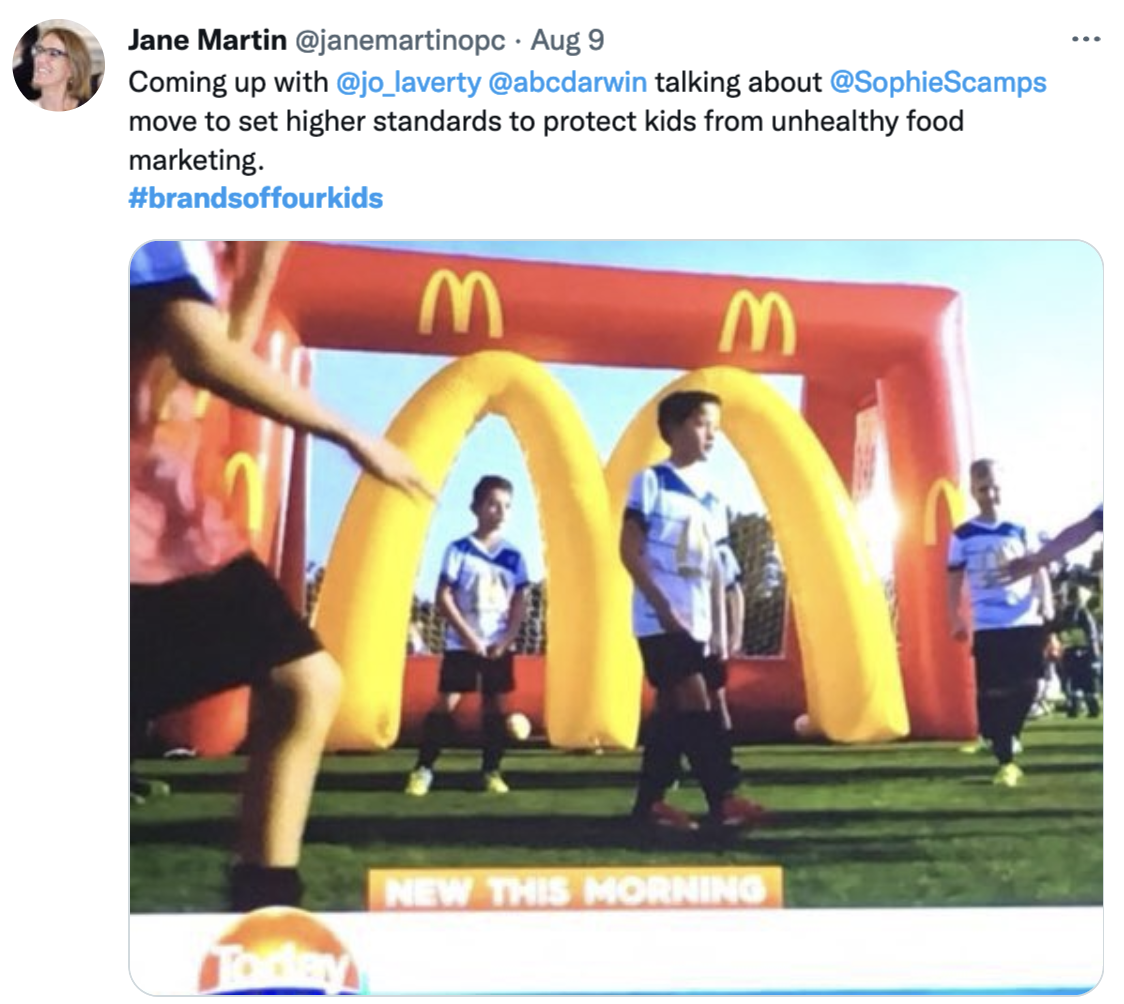 PrevPreviousOn climate and health, how are territory, state and federal governments shaping up?
NextAmid competing agendas and priorities, some suggestions for ways forward for meaningful health reformNext