Time as a social determinant of health

Daniel Reeders is a research officer with the What Works and Why project (w3project.org.au) at the Australian Research Centre in Sex, Health and Society. In this post he discusses a recent forum at Vic Health  on ‘Time as a social determinant of health’ and relates it to his personal experience working with a diverse range of communities.

On Tuesday, I spent my lunch break at a ‘Talk with your fork’ at VicHealth on ‘time as a social determinant of health’.  I jumped at the invitation to come along and cover it for Croakey, because the core concept – time pressure – had already showed up in my practice in health promotion with different communities.

Whether doing health promotion around HIV and sexual health on ‘African time’* at a freezing church hall in Shepparton, consulting with refugees about when’s the right time after settlement to start talking about sexual health or talking with bicultural community educators about how they support their communities and patch together a living out of casual roles with community organisations. Time was a key factor in all of these discussions.

In this piece I make a case study of time pressure as a social determinant of cancer screening – but first, let me tell you a bit about the presentations I heard on Tuesday.

All three presenters were members of the ‘time team’ at the National Centre for Epidemiology and Population Health at ANU in Canberra.  Lyndall Strazdins set the scene by talking through sociological perspectives on the productivity agenda in the workforce, and in particular, the addition of paid work to women’s lives without any reduction in the hours they spend caring for children and adult family members. Strazdins cited Hartmut Rosa’s evocative description of the fragmented experience of life under modern conditions of ‘social acceleration’, and related this in a concrete way to the question often posed by public health practitioners: ‘What is stopping them from taking time for things that are so important for their health?’

One health promotion campaign designer interviewed by Strazdins’s team in 2011 described time as ‘like a prescription… two fruit, five veg, and thirty minutes of physical activity every day’.  Posed in that way, it seems pretty simple – too simple, in fact, and Strazdins’s work aims to help practitioners engage with the complexity of time.  For example, in the West Australian ‘Find Thirty’ campaign, market research was used to reorient the message, since it turned out audience members experienced these ‘prescriptions’ as competing for time with other things they really valued, such as talking with their partner or togetherness with family.

Understanding the influence of time pressure also helps to explain the relationship between income and health.  For instance, Strazdins reviewed forthcoming research that shows that both time poverty and income inadequacy can increase the odds of physical inactivity, insufficient fruit and vegie intake, and eating foods that are high in fat, salt and sugar.  She points out that we’re pushing people to work until older ages to fund their retirement, but working longer was associated with reduced physical activity, so people working longer are likely to be sicker in retirement.

Lyndall’s colleagues Jane Dixon and Gemma Carey are working on an ARC Discovery grant asking whether time is a key mechanism through which labour market policies are impacting on health.  That’s a helpful contribution, because practitioners, policy-makers and the community can sometimes find social determinants talk a bit abstract.

What I was hearing in their presentation was the sense that time pressure was a mechanism through which processes of social transformation and social determinants of health like employment and welfare ‘touch down’ in everyday life, where their impact is felt upon health-related behaviours.

Jane Dixon talked about how modern life makes it ‘very hard to get up a routine, a rhythm, or rituals for life’.  There are temporal dimensions to a whole bunch of food related practices that research has associated with better outcomes for health – eating together, eating slowly (while talking, for example), planning meals rather than purchasing food on the spur of the moment, cooking at home rather than eating out.  These findings build on earlier research, captured in Dixon and Broom’s book The Seven Deadly Sins of Obesity, that found our obesity crisis emerged from a whole series of gradual shifts and accommodations in our food policy and eating habits over a seventy year period; Dixon says there are no ‘baddies’ to single out for blame.

Gemma Carey talked about the inadequacy of the categories we use in policy and political debates about employment policy, such as ‘casual’, ‘part time’ and ‘full time’.  She described the Working Time Dimensions scale the time team has developed, which looks at time at people’s experience of work in terms of security, predictability, quantity, sociability, flexibility and intensity (which refers to frequency of being pressed for time at work).  In her engagement with practitioners in the field Carey has found these categories really resonate – and they certainly did with me!

I want to make a case study here of an experience I had a couple of years ago, working for the Cancer Council Victoria to develop a recruitment strategy to improve cancer screening participation among Aboriginal people, culturally and linguistically diverse communities and a third target group, people in low socioeconomic status areas.  It illustrates the importance of the work the ‘time team’ at NCEPH are doing around time pressure as a mechanism.  In the underscreened project it was really difficult to identify what mechanisms (Pawson and Tilley, 1997) might explain the lower screening rates reported among people with low socioeconomic status.

Most of the research comes from America, where the lack of universal healthcare makes the context completely different from Australia’s.  (For the moment.) However, the US produces lots of randomised controlled trials and systematic reviews, which are the kinds of evidence we are often told to ‘apply’ in health promotion practice.

Strategies that had been previously tried had focused on reducing cost barriers at the point of service, and I felt thatwas just a bit too literal; the mechanisms involved in socioeconomic inequities in health are not just about lack of money.Australia’s high rates of bulk billing and free programs for breast and bowel cancer screening made it unlikely that upfront cost was the barrier that mattered most.

Instead, my sense was that lower screening participation rates were about where screening fits in a life under pressure.  In ‘quick and dirty ’bivariate analyses I conducted using data from the Social Health Atlas, the Socio-Economic Index for Areas (SEIFA) score was not a good predictor of screening rates in an area.  Areas with the highest scores, like Melbourne’s CBD and Docklands, had some of the lowest screening rates.  The best predictor I found was the average K-10 score on the National Health Survey – a measure of psychological distress.  This asks about survey respondents’ experience in the last thirty days – e.g. how often did you:

This shows up all the time in interviews and focus groups, although people don’t typically use the language of ‘psychological distress’; they’ll say ‘who has the time?’ and this is often described in qualitative health research as ‘competing life priorities’.  That construction tends to suggest communications need to increase the sense of urgency around screening, in an attempt to reorder those priorities.  My sense is that approach has significant potential to backfire – by increasing the pressure felt by people living under financial stress and their likelihood of reacting against the message (Witte and Allen, 2000).

The association also shows up in VicHealth research carried out by Yin Paradies and colleagues in Aboriginal and culturally diverse communities, in which it has been proposed as the mechanism that may produce the relationships observed between experiences of racism and poorer mental and cardiovascular health outcomes.

In “Wounds that break their stitches every morning”, the poet, counsellor and Aboriginal health researcher Dennis McDermott explains that the emotional ‘background noise’ of psychological distress makes it harder to detect the ‘signal’ of mental illness.  This reduces Aboriginal people’s chances of diagnosis and treatment and has the potential to contribute to high rates of suicide seen in their communities.

Paul Ward from Flinders University has argued that health service provision has been neglected in research into social determinants of health.  This includes access to services, their ability to work with people with diverse health literacies, their flexibility and convenience, and their ability to provide cultural safety.

It is not well recognised that all of those factors apply not just to Aboriginal and culturally diverse people but to people living under income pressure as well.

If you are living with chronic stress, the anticipation of feeling shamed by your kids running and screaming in the waiting room while you get a Pap smear is a pretty powerful barrier to screening participation.

If you are using emotional resources to deal with psychological distress, and the government sends you a bowel screening kit with instructions that look like this, you are more likely to set the kit aside and forget about it. 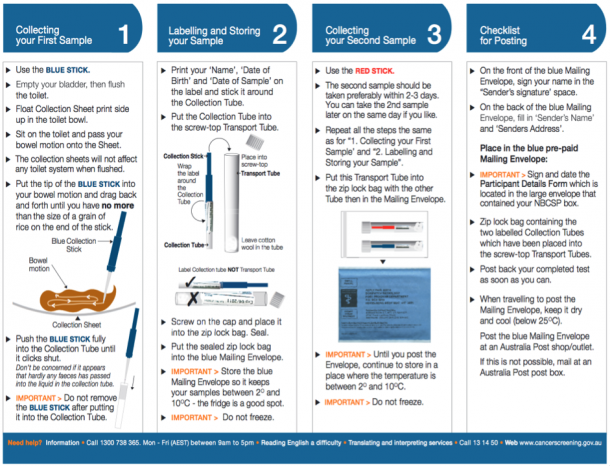 As the experience of cancer screening demonstrates, it’s not enough simply to provide access to a program when we know there are communities that experience everyday life pressures that impact on their uptake of opportunities for health.

The recruitment strategy we developed drew on a framework developed twenty years ago and validated against participation rates for screening programs in the US and Australia – the Fundamental Causes of Disease model (Link and Phelan, 1995).

The model argues that differences in access to flexible resources impact on the speed with which different social groups are able to take up new opportunities to protect and improve their health.  Link and Phelan talk about resources such as knowledge, literacy, status and money, but time obviously falls into this category.

The key thing for public health and health promotion is that these differences are known and predictable, and we shouldn’t need to wait until health inequities show up in surveillance data – we should anticipate and address them ahead of time.

Listening to the ‘time team’ and reflecting on my experience, one thing seems very clear: as the experience of time pressure is part of modern life, and as work is increasingly fragmented and intensified, we need to make convenience and cultural safety key considerations in health promotion and service delivery for everyone.

This is consistent with the Ottawa Charter (WHO, 1986) definition of health promotion as a coherent set of activities that can be used to increase communities’ control over the circumstances of their lives and the social, political and economic determinants of their health.  It is not consistent with an approach to health communication that simply loads more pressure and more information onto people.

* Note about ‘African time’ – this is a real thing but you’d better believe I critically interrogate the culture of obsessive time-keeping that constructs it as a ‘problem’.

Daniel Reeders is a research officer with the What Works and Why project (w3project.org.au) at the Australian Research Centre in Sex, Health and Society. Previously he has been Screening Program Advisor at Cancer Council Victoria, Senior Project Worker at the Multicultural Health and Support Service and Campaign Coordinator at Living Positive Victoria.  He blogs and tweets about health stigma.  These views are his own and do not represent his employers, past or present.